Part three of a very enjoyable Lesser Sundas trip where I was fortunate to join Mike Coverdale, Andy Marshall and Royke Mananta.

13 August.  We arrived in Ruteng at about 07:30 after an hours flight from Kupang.  Flores looked exceptionally green, at least compared to Sumba and Timor, with extensive areas of paddyfields around Ruteng and some impressive forested mountains and volcanos down the spine of the island.  We were met by Simon, our driver, but first had to reclaim our bags.  No luggage belt in Ruteng, rather an open window outside of which a trolley was wheeled and a scrum of passengers shouting to point out theirs.  We left Royke do the necessary, claiming our bags from him when he had been given them.  We set off up into the hills stopping briefly by the road where some Cream-browed Black-eyes were seen with Mountain and Oriental White-eyes and probably dark-eyes too.  Near the highest point of the road to Danau Ranamese.  Birding the roadside we were immediately deafened by the amazingly loud and musical, if a little repetitive, song of a Bare-throated Whistler.  We entered the forest on a well market trail and soon had excellent views of a much more impressive bird than I was expecting although in typical fashion it decided to move, after minutes of motionless, just as I was focusing my camera on it..  We continued on the trail encountering the first, and almost only, mud of the trip.  A small patch it was easy to step around and that we wouldn’t even have noticed anywhere else.  On the trail a Russet capped Tesia responded well to playback.  A great shape but a little disappointing compared to other Tesias as rather duller than I was expecting. Later a Pygmy Wren-Babbler played hide-and-seek effectively enough for me to fail to see it.  A Chestnut-backed Thrush feeding in a fruiting tree was much more obliging, and colourful.  We continued down to Danau Ranamese where we had lunch overlooking the lake when it wasn’t hidden by billowing clouds.  We saw our first Flores Minivets and Sunda Pygmy Woodpecker but otherwise the area was quiet.  We drove down to the small town of Kisol where we checked into the Hotel Charisma, something it seemed to be lacking.  We spent the later part of the afternoon and early evening walking a section of the Nangarawa road and adjacent forest trails.  It was very quiet with Flores Crow the only bird of note.  As it darkened we heard Glistening Kingfisher, Elegant Pitta, several Moluccan Scops Owls and Mees’s Nightjar but none were responsive.  We returned to Kisol somewhat dejected after another failed owling session.  Royke took us to a local Chinese Restaurant, I think on Simon’s recommendation as there was nothing to indicate its presence.  Here we had the best meal of the trip. 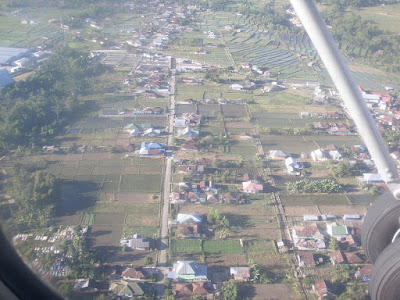 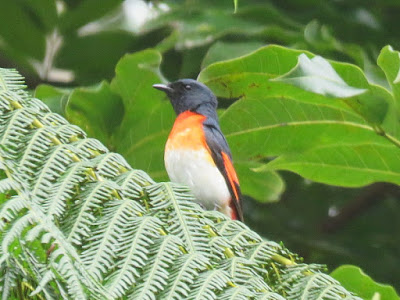 14 August.  We left Hotel Charisma at 04:00 returning to the area of the Nangarawa Road where we had heard Moluccan Scops Owl the previous evening and even managed to see it, albeit only really in flight in torchlight.  We walked further down the road as it was getting light but bird activity remained very slow.  A couple of hours at the raptor view point produced 12 Green Imperial Pigeons and eventually decent views of Flores Hawk Eagle after a couple of Bonelli’s Eagles had us wondering.  Again we only heard Glistening Kingfisher and Elegant Pitta with Flame-breasted Sunbird and Flores Crow seen.  By mid day the others went back to the hotel for lunch.  It was hot and there was little activity but I decided to stay in the forest instead.  I tried a narrow trail and after 100m it seemed in danger of petering out when it came to a junction.  I stopped and was looking down the left fork deciding whether to take it when I noticed a dark shape moving on the ground ahead of me.  It was a male Green Junglefowl slowly walking through the vegetation although never in full view. I was delighted as it was something I had been disappointed not to see on Sumba and would not be going to Komodo.  A small bird flock with a couple of Golden-rumped Flowerpeckers in it when through soon after but despite them being at head height I failed to see the named feature.  That was it until the others returned at 15:45 although inn fairness a couple of my quiet sits in the forest turned into mini naps.  If possible this afternoon was quieter than the previous one although we did finally catch up with a Glittering Kingfisher at dusk.  Another owling session was unproductive and we called it a day at 19:00.  We had another good meal in the Chinese Restaurant, which this time only seemed open for us, although the previous evenings very high standard was not quite matched.

15 August.  We left Kisol at 03:00 driving an hour to Danau Ranamese for another owling session.  A very mobile Wallace’s Scops Owl responded intermittently with only Andy and Mike seeing it very briefly on one occasion as it flew overhead.  We birded the road seeing two Glittering Kingfishers, Flores Leaf Warbler and Bare-throated Whistlers although none of the later sang as vigorously as our first..  We returned to Ruteng late morning checking in to the nicely located Hotel FX-72 where we had lunch.  In the afternoon we birded the Poco Ranaka Road, the old road into the mountains just outside of town, but it soon became undriveable and we had to walk.  We saw Black-backed Fruit Dove (a different race with a greyer head), Dark-backed Imperial Pigeon and Thick-billed Heleia.  We continued walking up the road until dusk then came down trawling for owls to no avail.  We were back at the car at 19:40 and returned to our hotel. 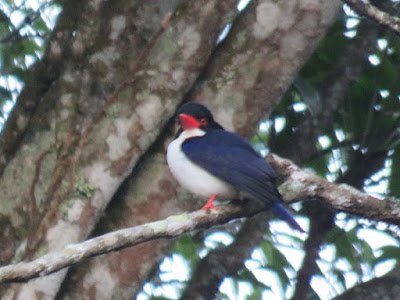 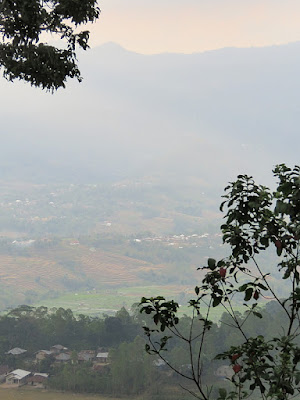 16 August.  We were up at 03:30 and drove to Danau Ranamese arriving at 04:00 for another owling session.  We heard then eventually, as it was getting light at 05:30, saw Flores Scops Owl.  Morning owling sessions were definitely more successful than those in the evening, but still very hard. We drove to Pagal for the rest of the morning arriving at 07:00.  We walked sections of the road seeing Wallace's Hanging Parrot, Crested Dark-eye and for me Elegant Pitta but by 11:00 it was very slow going, and had warmed up considerably so we returned to the FX-72.  After lunch and a bit of a siesta we returned to the Danau Ranamese area walking the trail near the pass from 15:30.  It was very quiet although I did see Pygmy Wren-Babbler, although not very well.  Low cloud came in as it was getting dark preventing owling by the lake.  We crossed the pass back towards Ruteng and found it clear by a coffee plantation.  Here we had a limited response from a distant Wallace's Scops Owl before returning to the FX-72 for a late meal.  A rather frustrating day. 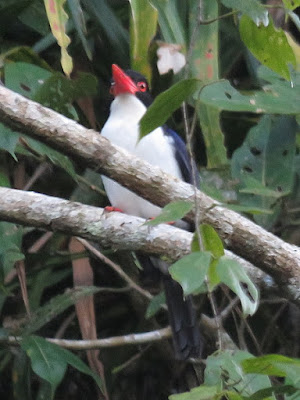 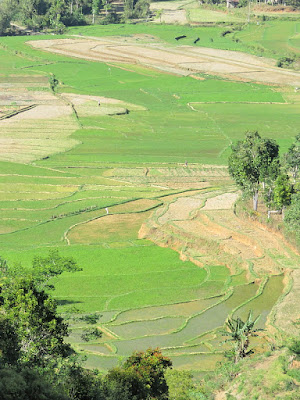 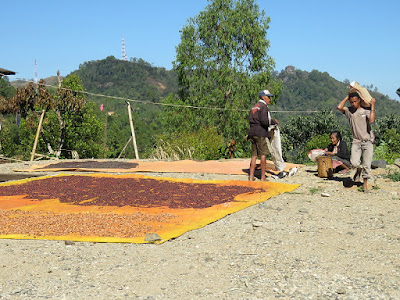 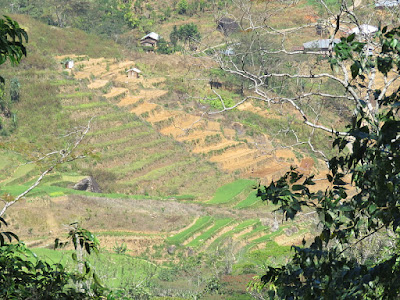 17 August.  Our plan had been for an early start to the 2-3 hour drive to Puaralolo for Flores Monarch but having not seen Wallace's Scops Owl we felt without a great deal of confidence that we had to give it one final chance even though it meant heading in the opposite direction.  We were up just before 03:00 and drove to the coffee plantation for a brief stop (nothing was responding) before continuing to Danau Ranamese.  We felt it offered our best chance of Wallace's Scops Owl but we only elicited a very distant response to playback. Time was very much against us and we had to leave, although not before a final stop at the coffee plantation.  Two owls were calling very intermittently, but were not close and not moving from inaccessible areas, disappointing to say the least.  We left at 05:10 and some speedy driving by Simon got us to Puaralolo by 07:25.  He then received news his father was ill and a replacement driver appeared on a motorbike.  We spent two hours on the trail there but it was already quite hot.  We found two Flores Monarchs which were nice but only Andy saw Chestnut-capped Thrush, a silent bird.  Fortunately Mike and I had seen the species before although mine was as long ago at 1987 and I had hoped to renew acquaintance with.  We then drove a rough track looking for a forest patch driver had been told of but failed to find it or anywhere suitable.  We continued to Labuan Bajo where Royke had booked us into the rather posh Luwansa Beach Resort where we arrived at 12:10.  Here we were back on the beaten track and rubbing shoulders almost for the first time with other tourists as Labuan Bajo was the departure point for Komodo.  I had a paddle in the Flores Sea after lunch, nice in the water but the sand was almost too hot to stand on.  At 15:00 we drove to the Poto Wangka road where we stayed to dusk.  We were hoping for pigeons or parrots and in particular Flores Green Pigeon or Leaf Lorikeet but had to be content with a nice flyover Great-billed Parrot.  We heard several Elegant Pittas but none showed although a Mees's Nightjar as it was getting dark at 19:00 was nice and a Moluccan Scops Owl on the road and then in a roadside tree on the way back an unexpected bonus. Back at the Beach Resort it was my last evening.  Royke arranged for Simon, who would be back on driving duties as his father had recovered, to take me back to Poto Wangka in the morning.  Royke had a boat arranged to take him, Mike and Andy to Komodo before flying back to Bali and visiting Timor Leste.  Andy was then going to Sumatra and West Papua, quite some trip ... 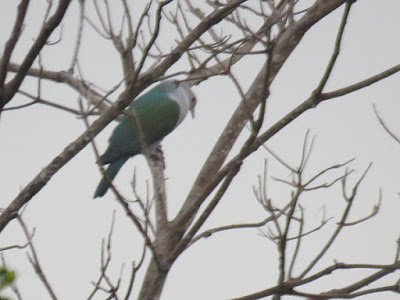 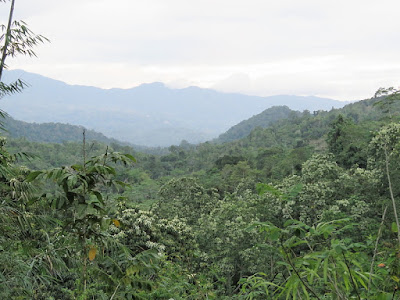 18 August.  I was picked up by Simon at 05:25, sadly just before Royke arrived to see me off -  we were halfway down the road when I saw him. Simon dropped me at the first high section of the road as it was getting light at 05:50, having already seen a Mees's Nightjar on the road.  We agreed Simon would return to take me to the airport at 09:30.  I walked further along the road for 40 minutes until it started dropping steeply before retracing my steps and continuing towards Labuan Bajo.  I had no success with parrots or pigeons but saw three Elegant Pittas which more than made up for it.  It was quite hot by 09:00 and i was ready to leave when Simon arrived at 09:25.  He dropped me at the airport at 09:55 and then I had a succession of long waits and flights, Labuan Bajo to Bali, Bali to Jakarta, Jakarta to Amsterdam, Amsterdam to Gatwick and two hours there waiting for my cheap train.  Megan met me at Shoreham station and I was finally home 13:45 on 19th, after about 35 hours of travelling. 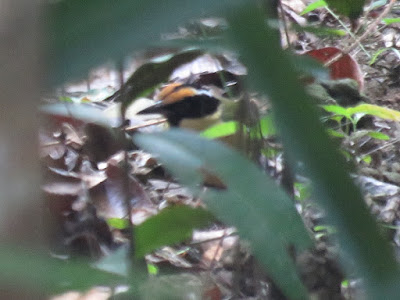 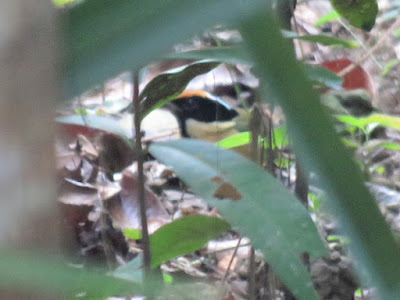 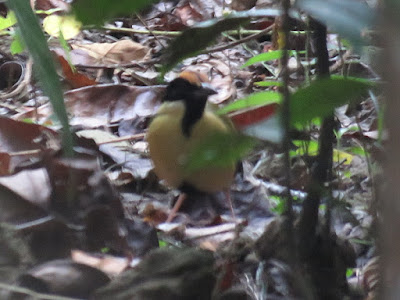 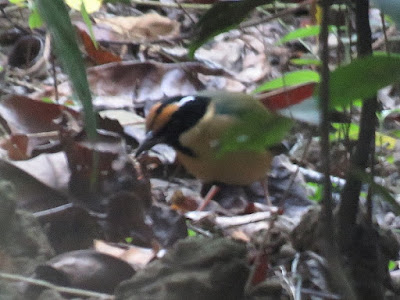 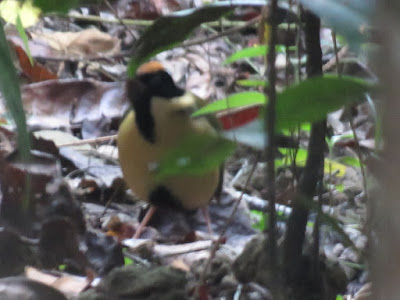 It had been a very enjoyable trip and we had seen most of the birds we could have hoped for (and all those I was particularly keen to see).  Royke had organised things very well and had been good company and Mike and Andy were really excellent travelling companions. Thanks for having me along and helping me get onto some of the better birds. It was great.
Posted by richard fairbank at 20:02