This blog is the first of two recounting a family holiday to Namibia in July 2008. It was sadly before I had embraced the digital age and the accompanying photographs were taken, some by Josh, Nessa and Megan, on print film with a couple of old Pentax cameras. The prints were not very good to start with and have not been improved by scanning, quite the reverse.

Introduction. Nessa was about to go off to University and we were wanting a memorable family holiday while we were still together.  Josh was 14 and old enough to appreciate somewhere different too.  I was the only one who had been to Africa before and we decided on Namibia, being somewhere with a good reputation for safety where we could self-drive.  It had a reasonable climate (although it was colder in winter than we were expecting), no time difference (so no jet-lag) and direct overnight flights from Gatwick with Air Namibia.  For me there were some highly sought-after birds I was very keen to see but not too many to make a family holiday frustrating for any of us.  I investigated further to see if it would be feasible and discovered the Cardboard Box Travel Company through whom we could book accommodation online.  I started on an itinerary and soon found the main restriction was likely to be cost - Namibia was not cheap.  This was particularly true at Etosha where the limited ‘cheaper’ accommodation was already fully booked (by ‘overland’ tour companies we suspected).  Our options were not to visit Etosha (unthinkable!), try and stay close enough to visit as a day trip (not practical) or camp (not very popular with the family)!  After much persuasion I convinced Megan it would be OK to camp although this then meant we had to take 2 tents and 4 sleeping bags, karrimats etc.  It was sensible to get the camping out of the way first and this determined the route we would take – north to Etosha, across to the coast, south to Sossusvlei and back to Windhoek.  My most wanted bird was White-tailed Shrike and the luxury tented lodge at Erongo seemed the most guaranteed place to see it.  A few years earlier Frank Lambert had blagged his way in to look around but that didn’t really seem an option for us so we committed 1/3rd of our accommodation budget to a night there (it was very nice).

Wednesday 23 July.  Roni gave us a lift up to Gatwick where we checked in for our 22:40 flight to Windhoek.  The North Terminal was almost deserted as ours was the last departure.  It was a comfortable flight and we all managed some sleep.

Thursday 24 July.  We landed in Windoek just before 09:00, collected the car (booked through Europcar), managed to squash all our bags into the boot and drove north.  A slight panic at our first stop when the car wouldn’t start, until I realised it wouldn’t do so unless my foot was on the brake.  Traffic was light and the roads good and we continued north to Waterburg National Park, a total of 343 kms from the airport.  Seeing Warthogs, Red Hartebeest and Lilac-breasted Rollers by the road brought it home that we were in Africa.  We showed our Cardboard Box voucher, put up the tents and wandered around before getting some food.  A pair of Red-billed Francolins were skulking around by the restaurant and 0ver 100 Alpine Swifts flew over the escarpment above us.  It was mid-winter but still colder than we were expecting.

Friday 25 July.  We had breakfast in the restaurant at Waterberg, packed away the tents and climbed up the escarpment to a lookout point.  We saw a good selection of birds including Verreaux’s Eagles (2 adults and 2 juveniles), more Red-billed Francolins, Bradfield’s Swift, Rosy-faced Lovebird, Ruppell’s Parrot, and Groundscraper Thrush as well as Banded Mongeese, Chamca Baboons and Rock Hyrax.  We returned to the main road and continued north to Otjiwarongo before turning NE to Otavi and Tsumeb, the last town before Etosha.  We filled up with petrol, the tank being somewhat defective as it allowed it to be overfilled – somewhat alarming to see petrol overflowing. We also stopped in a supermarket to buy supplementary food for the three nights we would be camping at Etosha.  After a further hour we arrived at the Namutoni entrance to Etosha and after a slight delay entered the National Park and checked in.  Turning a corner and seeing Giraffes next to the road was brilliant and really made us appreciate we were in Africa.  We were allocated a camp site and quickly put up our rather small tents.  Most other campers had fully equipped 4WDs with roof or trailer tents and collapsible tables and chairs.  It would have been a nice way to travel if we were on a camping trip but we were mainly staying in guest houses and restricted to what we could take on the plane.  Our sites built in barbeque remained unlit although with the temperature dropping sharply as the sun set it would have been a good source of warmth.  A lone Elephant was near the waterhole when we wandered down before dusk and a Spotted Hyena appeared as the light went but it was too cold to stay much after dark so we had something to eat and an early night.  We all slept fully clothed and wished we had brought warmer sleeping bags. 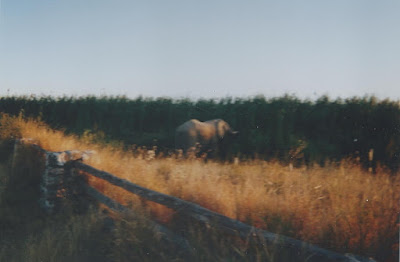 Saturday 26 July.  All day in Etosha National Park. An early walk around Namutoni was fairly quiet with a Three-striped Tchagra the best I saw. We packed away our tents and slowly drove around Etosha stopping frequently to look at animals or birds. We eventually arrived at Halali, the middle of the regular camps in the park, checked in and put up our tents again. Animals seen included 40 Giraffe, 40 Burchell’s Zebra, 200 Springbok, 100 Gemsbok, 20 Kudu, 3 Elephants, 2 Spotted Hyena and a Porcupine. For me birds were just as impressive although nothing was new. I saw an estimated 850 Double-banded and 3 Namaqua Sandgrouse, Two-banded Courser, 3 Red-crested Korhaans, 3 Kori Bustards, 2 Red-necked Falcons, 6 Bateleurs, Southern Pied Babbler, Golden-breasted Bunting and Scaly-feathered and Red-headed Finches. After dark a Black Rhino appeared at the waterhole before wandering off. It or another returned later but another very cold night had us curtailing activities earlier than we would have liked. 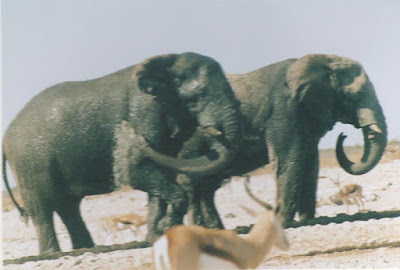 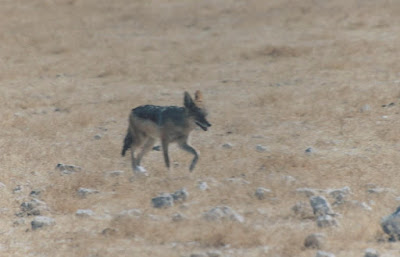 Sunday 27 July.  All day in Etosha National Park. I wandered around the camp site before breakfast seeing Damara Red-billed Hornbill, White-browed Scrub-Robin and Carp’s Tit. We were staying a second night at Halali, pleased it would be our last under canvas, so did not need to take down the tents. We slowly drove around Etosha for most of the day, visiting waterholes and stopping frequently. We went as far as Okaukuejo, the westernmost of the three main camps, before returning. Animals were superb with 2 Lions, 1000 Springbok, 500 Burchell’s Zebra, 100 Gemsbok, 4 Steenbok, 40 Black-faced Impala, 100 Red Hartebeeste, 50 Blue Wildebeest, 50 Giraffe and over 50 Elephants. We saw 4 Black Rhinos, at the Okaukuejo waterhole in daylight and at Halali after dark, a female with large calf, a male and an adolescent. Birds included 500+ Double-banded Sandgrouse around Halali waterhole at dawn and dusk, 6 Two-banded and a Temminck’s Courser, Pygmy Falcon, 2 Martial Eagles, Northern Black Korhaan, 12 Spike-healed Larks, 4 Swallow-tailed Bee-eaters and 20 Ostriches. Another cold night but it would be our last under canvas.
Monday 28 July. We packed away the tents, pleased not to be needing them again, seeing 2 superb Groundscraper Thrushes and 6 White Helmet-shrikes around the camp site. We slowly drove to Okaukuejo seeing 3 Lions, an Elephant and the usual selection of game in slightly lower numbers (e.g. 750 Springbok, 400 Zebra). Birds were well represented with 30 Ostriches, 120 Helmeted Gunieafowl, 4 Lappet-faced Vultures, 5 Secretary Birds, Kori Bustard, 3Northern Black and a Red-crested Korhaan, 3 Damara Hornbills, 2 Swallow-tailed Bee-eaters, Kalahari Scrub-Robin, Chestnut-backed and Grey-backed Sparrow-Larks and shaft-tailed Whydahs. We somewhat reluctantly left Okaukuejo and Etosha after lunch and drove to Otjiwarongo. Once outside Etosha animals were few and far between although 5 Warthogs beside the road were as amusing as ever.  We found the Bush Pillow Guest House where we were booked in but it was locked up and appeared deserted (perhaps we hadn’t quite finished with the tents). Fortunately we were soon seen and made most welcome.  It very comfortable and warm and we were directed to a well-stocked supermarket nearby – the range of food available in Etosha was somewhat limited. Camping had made our visit to Etosha feasible and we wouldn’t have missed it for anything but it was nice to have a roof over our heads again.

Tuesday 29 July. We left Otjiwarongo after a good breakfast and drove SW to Omaruru seeing Warthogs and Banded mongeese on the road. We had lunch before continuing the short distance to Erongo Wilderness Camp. We checked in and were given two substantial hybrid tent/chalets tastefully cut into the rocks. While Megan, Nessa and Josh discovered how cold the pool was I birded along the entrance road. I saw 3 Monteiro’s Hornbills and 2 male Short-toed Rock Thrushes before finding 2 superb White-tailed Shrikes. This was the bird I most wanted to see in Namibia and I was not disappointed, noting that it was better than expected. My other main target was Rockrunner and I saw one on the way back to the chalets as well as Dusky Sunbird, Ashy Tit and Acacia Pied Barbet. Rock Hyrax were common as were Chamca Baboons but fortunately only on a large rockface some distance from the camp. Late afternoon we went on a jeep safari to Paula’s Cave for a sundowner and some interesting bushman rock art. This was real luxury at a level we were not accustomed to. We returned to the camp seeing a Freckled Nightjar on the way. The only bird I could have hoped to see was Hartlaub’s Francolin and my best chance for that was always going to be early morning. We had an excellent evening meal which was interrupted by 2 Porcupines visiting the kitchen. Brilliant.

Posted by richard fairbank at 17:43