Continuing on the Naturetrek Sri Lanka Endemic Bird trip, with eleven others and two excellent leaders (Indi and Dinal), we had arrived at the Centurion Hotel beside Chandrika Lake in Embilipitiya.

01 February 2019. We left the hotel as it was getting light at 06:00 with a packed breakfast and drove to the entrance of Uda Walawe National Park where we decamped into three jeeps (we had tracker Lionel in ours) and joined a long queue of other tourists waiting in jeeps for it to open. As usual with Sri Lanka permits had to be bought on the day which rather wasted the best part of it. Once in we soon branched off from most jeeps which were concentrating on elephants. We drove around in a loose convoy for three hours seeing a lot of birds without them including anything special, at least as far as I was concerned. I had only marginally better and still not countable views of another Grey-bellied Cuckoo and failed to get onto a Blue-faced Malkoha that Lionel spotted and only Peter saw. We had no luck at all with Sirkeer Malkoha which I had been particularly hoping for. Indi later mentioned that afternoon drives were more productive but not possible on our very tight itinerary (although an earlier start from Nuwara Ellya should have allowed it). An afternoon visit would have involved less of a scrum to enter the park and more bird activity as it started to cool down late afternoon rather than the heat of the day we mostly had. The contrast between what we saw in our morning and Dave Cooper and Brenda Kay on an afternoon the previous November rather emphasised this (http://eastsussexbirding.blogspot.com/2019/01/30th-november-2018-nuwara-eliya-to.html). I had seen lots of Jerdon’s Bush Larks and a Jungle Prinia was also new while a pair of Great Stone Plovers were excellent as were a pair of Orange-breasted Green Pigeons. Indi also had a new bird – White Wagtail - although it didn't do a lot for us. Back in the bus we drove to a nearby hotel for an early lunch. I stayed out but it was just too far (2km) to walk to the woodshrike area and back in the time I had, although I could have done if I’d realised we would be driving back past it. As it was my walk along the edge of sugar cane fields was rather unproductive (and hot). We drove to Sinharaja arriving at 15:30. A look around the entrance failed to find the ‘resident’ Sri Lanka Blue Magpie, the suspicion being that a crowd of noisy school children had disturbed it. We drove on to our hotel, the Blue Magpie Lodge, and I was a little disappointed to find it was a couple of km outside the park in fairly uninspiring habitat. Not that it matter much as we were soon hit by a very heavy rainstorm which limited birding to the veranda. From there Dave spotted a Slaty-legged Crake visiting the hotel’s rubbish dump 100m away. Its appearance was short lived thanks to two Grey Mongeese and then a local cat but it was a nice end to what been an enjoyable if rather disappointing day. Tomorrow was likely to be the trip’s make or break day and having made no inroads on the remaining endemics today I was starting to feel rather stressed! 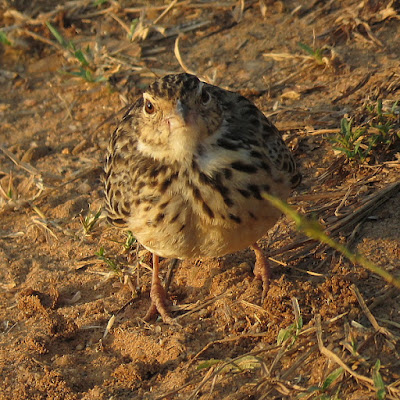 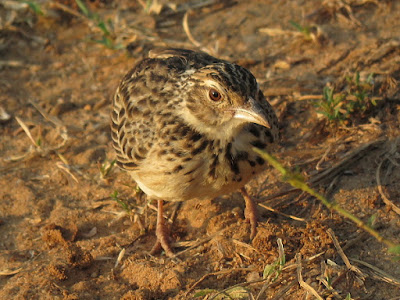 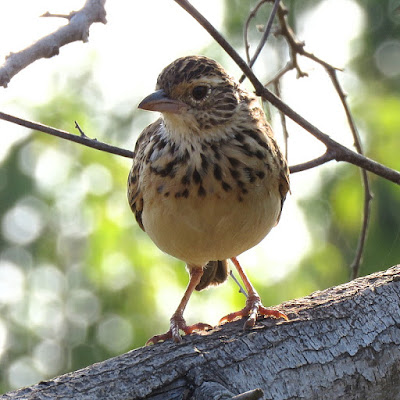 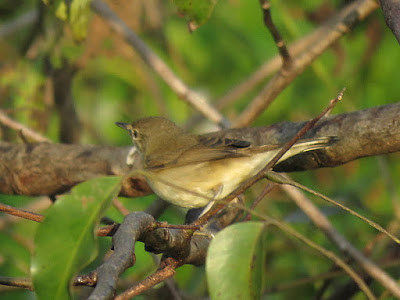 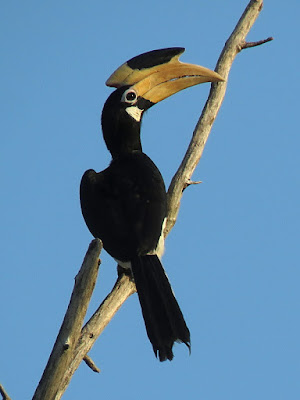 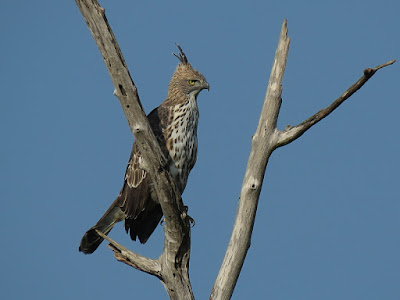 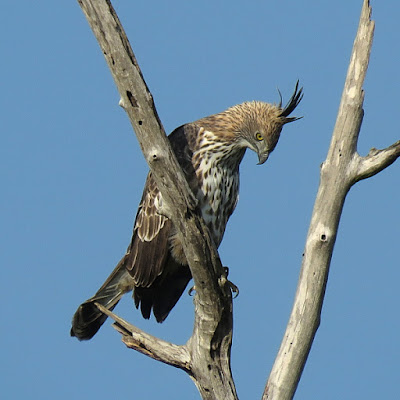 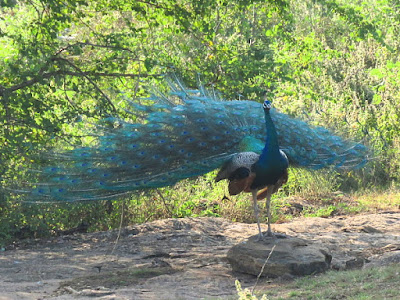 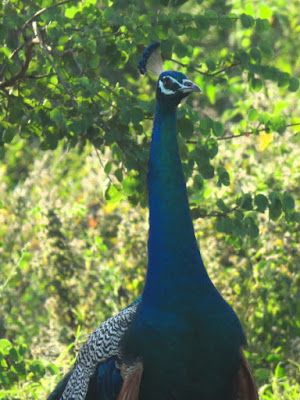 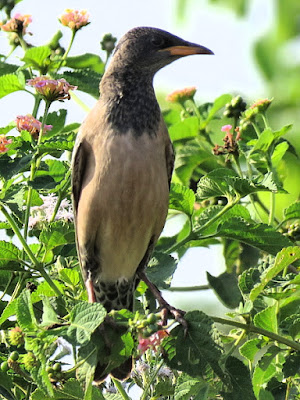 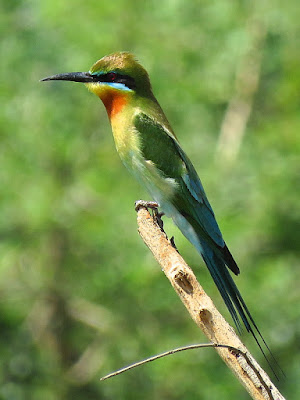 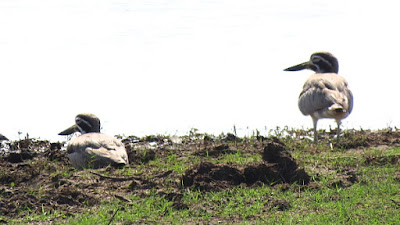 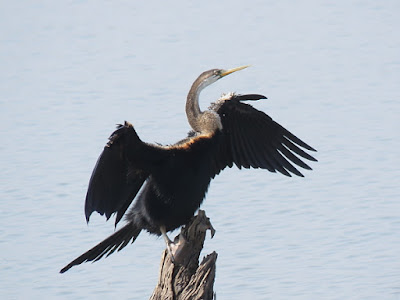 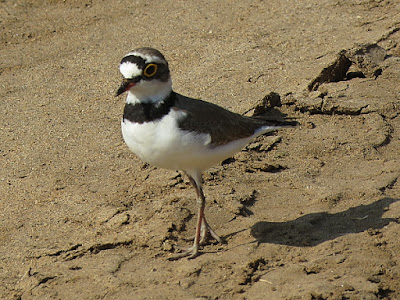 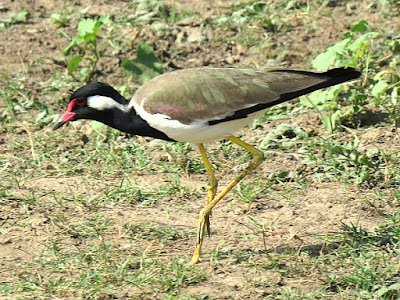 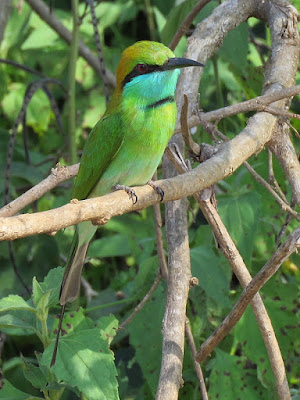 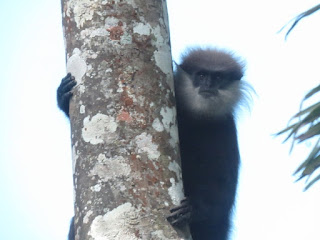 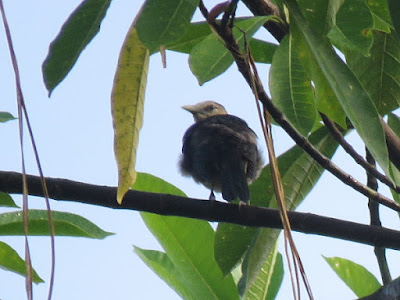 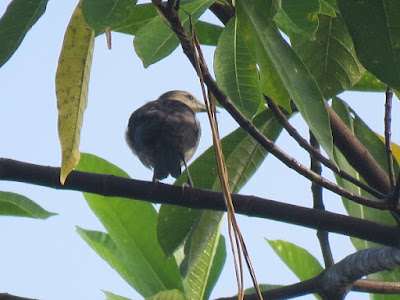 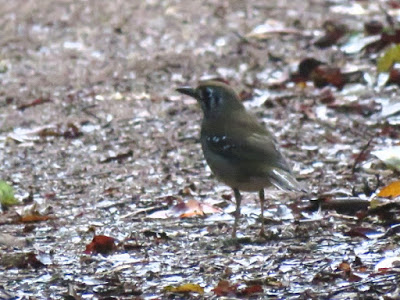 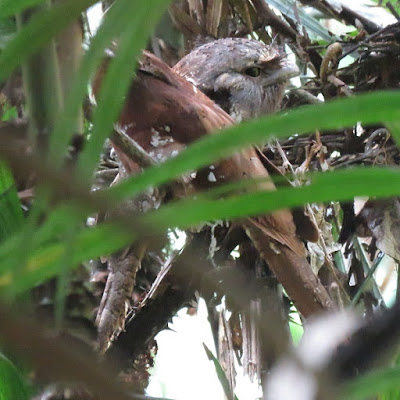 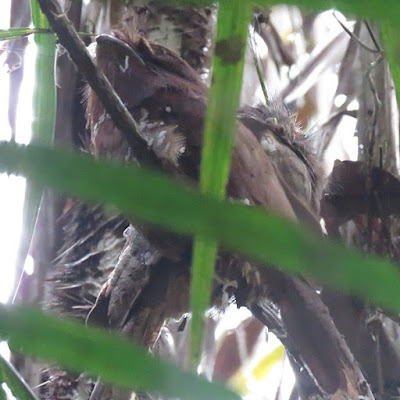 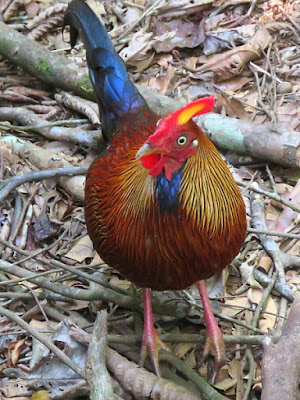 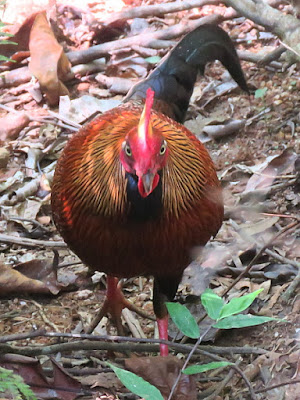 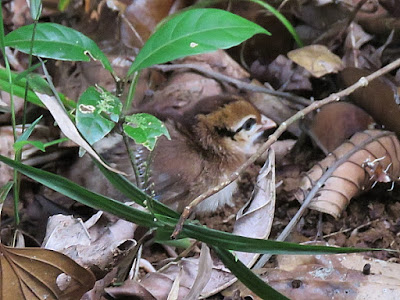 03 February 2019. We left the lodge at 05:00 in two Jeeps with a packed breakfast for the 45 minute drive to the spurfowl site. It was the back garden of a house on the edge of the forest much further along the road where we’d seen the Serendib Scops Owl. We arrived before dawn to be sure of being able to see the area as there was only limited viewing, from their kitchen window or beside the house. As it turned out we were the only group trying that morning and I opted for the side of the house where I made use of my small collapsible stool. Some chairs were found for the others waiting outside and we anxiously overlooked the small open area into which their drain flowed. The spurfowl had appeared at 07:20 the previous day but didn’t always show. Not what I wanted to hear. A male then a female Sri Lanka Junglefowl appeared and we ended up seeing at least two females, three juveniles and four small chicks. We also saw three Emerald Doves, two Spot-winged Thrushes and four Orange-billed Babblers while a Slaty-legged Crake made a quick pass. By now it was 07:15 but the light was remaining stubbornly poor. At 07:25 a male Sri Lanka Spurfowl appeared and slowly and rather erratically made its way across the clearing. The final endemic, at least for a few of us. We birded along the road hoping to find Crimson-backed Flameback with no success. Perhaps the forest was too open as we saw two Red-backed Flamebacks. Improved on views of Sri Lanka Myna were some compensation and we saw another Green-billed Coucal and Sri Lanka Blue Magpie. We returned to the Blue Magpie Lodge where Indi, Dinal and Dhanushka took Dave, Tony and I back along the road up to the reserve for a final look for the flameback. No success although a male Indian Paradise Flycatcher was nice. I birded from the veranda until it was time to leave. We left Dinal and four of the group to head for the coast and some whale watching while Indi took the remaining eight of us back to Colombo and the Airport Garden Hotel. We arrived in daylight and I wandered around the gardens until dark seeing Blue-tailed Bee-eater, Brown-headed Barbet and Yellow-billed Babblers but not much else. Immediately after dark Indi took some of us out to look for Brown Hawk Owl in the hotel grounds. It was about the easiest night birding I’ve done with it coming in immediately. How easy it had been made me regret that we’d not been able to try any night birding elsewhere although as the trip had exceeded my expectations I shouldn’t really be complaining. At 22:00 I said goodbye to Shane as he got in a taxi to the airport for his long flight back to New Mexico. He’d been a good room-mate not complaining at my late hours. 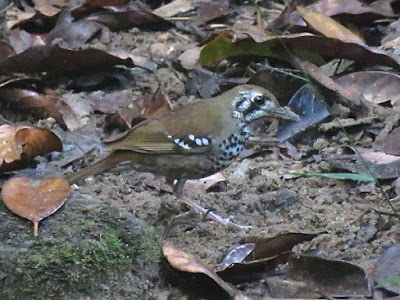 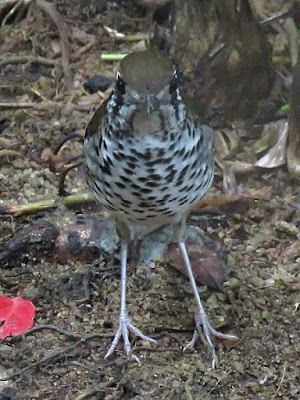 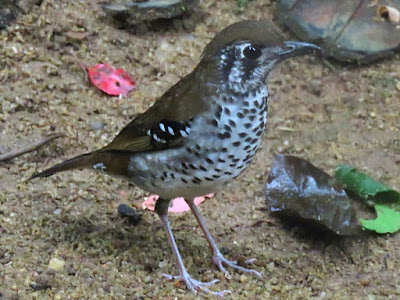 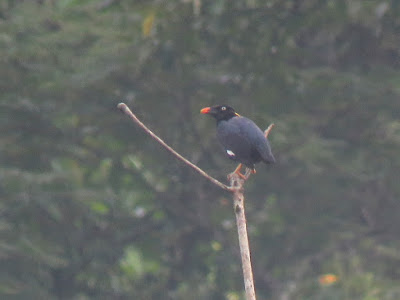 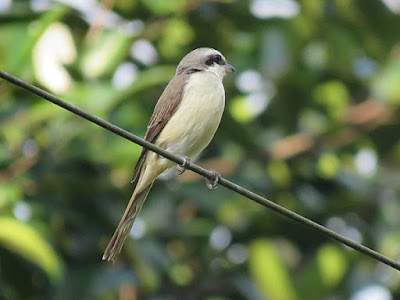 04 February 2019. We were to gather in the hotel lobby at 08:45. I’d worked out from my phone that it was about a 15 minute walk to the edge of the lagoon the hotel was near too. I’d established the previous evening that there was a canal and high fence between us and the dual carriageway that bordered the lagoon and it would be necessary to walk back to the road we’d come in on, follow it for 500m before turning back towards the lagoon which could be accessed by an underpass. I packed my bag and set off at 07:00, a little later than anticipated. It took slightly longer than 15 minutes to reach the lagoon and it was a little disappointing with only Little Cormorants, egrets and Whiskered Terns visible although a Striated Heron was new for the trip and I saw Red-wattled Lapwing, Blyth’s Reed Warbler and Grey-headed Wagtail on the way. Back in the hotel gardens a Spoonbill flew over and I saw Stork-billed Kingfisher, Red-backed Flameback and more Yellow-billed Babblers making a nice end to the trip. I just had time to grab my bag and a bit of breakfast before we left for the airport. Indi had been a great leader and thankfully quite relaxed about my wandering off at meal times (in my own time as he nicely put it when one or two comments were made). Our flight was on time and even got into Heathrow slightly ahead of time. I made it to Victoria in good time for my pre-booked cheap train ticket, in the event the one before would have been fine. The train was 15 minutes late arriving at Shoreham but that is Southern Rail for you. Megan came down to meet me and we were home at 23:30 (05:00 Sri Lanka time).
Posted by richard fairbank at 17:03