Nick Preston and I decided to visit Puerto Rico and the Dominion Republic over Easter 2001. Nick was restricted to School holidays when flights were at their most expensive so I found flights going out two days earlier and back a day later that saved as much as I was likely to spend in that time. This blog covers the Puerto Rico part of the trip and is based on very scant notebook entries and unreliable memories. It is illustrated with a few digitised instamatic prints which includes just one bird. If that is not enough to put you off please read on ...


I left Heathrow on 5 April 2001, changed planes in Madrid and arrived in San Juan that afternoon. I picked up a car and drove east along the coast to Luquillo where I camped on the beach. There was a charge of $10 per night but nobody obvious to pay it to although in fairness I was too tired to try too hard. Great Antillean Grackles and Zenada Doves were common and my first new birds and I also saw Brown Pelican, Laughing Gull, a single Royal Tern, 2 each of Common Ground and White-winged Doves and 12 Grey Kingbirds.

On 6 April I was up early, still no one about to pay, and drove to El Yunque Caribbean National Forest. There I birded the El Yunque trail, Mount Britton Link and Mount Britton Road. It took me a while to find my first Puerto Rican Tody (my first tody of any sort and one of my main targets for the trip) but I eventually found seven. They did not disappoint. Also new were 10 Scaly-naped Pigeons, Green Mango, female Puerto Rican Emerald, male Puerto Rican Woodpecker, 3 Pearly-eyed Thrashers, 5 Red-legged Thrushes, Black-whiskered Vireo, 3 Puerto Rican Spindalis and 3 Puerto Rican Tanagers. I couldn’t see anywhere obvious to camp and headed back to the coast and Playa Seven Seas, birding there until dusk and adding another six new birds: 2 White-crowned Pigeons, 2 Mangrove Cuckoos, male Green-throated Carib, male Antillean Crested Hummingbird, female Antillean Mango and Caribbean Elania. At Playa Seven Seas I also saw 8 Magnificent Frigatebirds, Tricoloured and Yellow-crowned Night Herons, 7 Semipalmated Plovers, 2 Spotted Sandpipers, Belted Kingfisher, 2 American Kestrels, 5 Bananaquits and a Parula Warbler. I paid $20 for two nights camping and put up my tent. It had been a brilliant first day, just a shame Nick hadn’t been with me to share it. 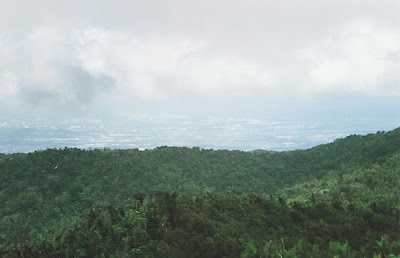 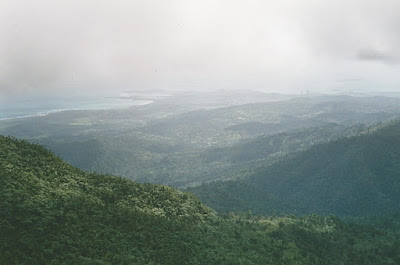 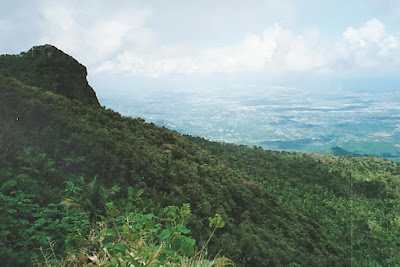 On 7 April I birded around Playa Seven Seas until 07:00 then left to drive to San Jose airport to collect Nick. A Green Heron, Smooth-billed Ani and 2 Cape May Warblers were new for the trip. Nick’s flight was on time and we drove back to El Yunque where we spent the rest of the day. We birded the road, Mount Britton trail, tower and spur, El Yunque trail and road and 1.5km of Crosswinds. We saw all the birds I’d seen yesterday with 14 Scaly-naped Pigeons, Green Mango, 4 Puerto Rican Emeralds, 10 Puerto Rican Todies, male Puerto Rican Woodpecker, 5 Pearly-eyed Thrashers, 3 Red-legged Thrushes, 2 Black-whiskered Vireos, 4 Puerto Rican Spindalis and 6 Puerto Rican Tanagers. We also saw a Puerto Rican Bullfinch which was new for me, Broad-winged and Red-tailed Hawks, single Black & White, Parula and Cape May Warblers and a Puerto Rican Parrot although the latter was in an aviary as part of a recovery programme as there were less than 20 in the wild. We drove to Playa Seven Seas where Nick put up his tent as it was getting dark.
We were up as it was getting light on 8 April and birded around Playa Seven Seas before packing up our tents. Bahama Pintail and Osprey were new for me for the trip while Nick caught up with most of the birds I’d seen there two days previously. Best of those were Mangrove Cuckoo, Green-throated Carib, 5 Antillean Crested Hummingbirds, female Antillean Mango and Puerto Rican Woodpecker. We also saw six species of American warbler - 5 Northern Waterthrushes, 2 superb Ovenbirds, 3 Cape May, a Yellow and 3 Parula Warblers and an American Redstart - four of which were new for the trip. We drove around the coast to the lagoons at Humacao Nature Reserve. This added 83 Pied-billed Grebes(!), 30 Ruddy Duck, single Snowy Egret and Little Blue Heron, 30 Moorhen, 25 Caribbean Coot, Black-necked Stilt and Black-cowled Oriole. It was then a long drive along the south coast to Guanica where we parked just off the 333 and Nick put up his tent. I was too tired to do the same and slept in the car.

On 9 April we were up before dawn and birded along route 333 as it was getting light seeing 3 Puerto Rican Nightjars although none gave good views. We continued into the Guanica Biosphere Reserve where other new birds were 4 Puerto Rican Lizard Cuckoos, 2 Puerto Rican Flycatchers, 2 Antillean Euphonias, 11 Adelaide’s Warblers and 3 Puerto Rican Vireos. We also saw male Antillean Mango, 33 (!!) Puerto Rican Todies and 9 Puerto Rican Bullfinches while 6 Turkey Vulture, American Oystercatcher and 2 Indian Silverbills (!) were new for the trip. We drove route 324 to La Parguera seeing 5 Clapper Rails and c25 Yellow-shouldered Blackbirds (both new), Wilson’s and 10 Grey Plovers, 10 Least Sandpipers, 5 Lesser Yellowlegs, 6 Collared Doves and a Northern Waterthrush on and around the saltponds on the way. We stayed in Villa Andujar at $40 for two.

We drove to the end of route 333 for dawn on 10 April seeing Antillean Nighthawk well and a much better view of Puerto Rican Nightjar than we’d managed the previous morning. We returned to La Parguera on route 324 seeing a Willet but otherwise similar species to previously on the pools. We quickly drove inland to Marico Forest Reserve where we spent the rest of the day. Here Elfin Woods Warbler was our main target and we saw a male at km 13.1 and 2 females on the track from the Forest Station. Big celebrations. The forest here was excellent and we saw 10 Scaly-naped Pigeons, 2 Green Mangos, 4 Puerto Rican Emeralds, 12 Puerto Rican Todies, 3 Puerto Rican Woodpeckers, 10 Grey and a Loggerhead Kingbird (new for us), Yellow-faced and 5 Black-faced Grassquits, 3 Puerto Rican Bullfinches, 15 Puerto Rican Tanagers, 6 Puerto Rican Spindalis, Black & White, Parula and 2 Cape May Warblers, 2 American Redstarts, 9 Puerto Rican and 3 Black-whiskered Vireos, 4 Black-cowled Orioles and 4 Shiny Cowbirds. Adrian, one of the rangers, kindly let us stay in the Forest Station dormitory and as it was getting dark Puerto Rican Screech Owls started calling. We had mega views of a pair near the Forest Station and then another further down the track while two others were heard. A brilliant end to our most enjoyable day so far.

We were out along the Marico Forest Station trail soon after dawn on 11 April. Two Puerto Rican Pewees were new for us and a pair of Elfin Woods Warblers very nice to see again. Otherwise it was fairly quiet with Puerto Rican Lizard Cuckoo, 4 Puerto Rican Todies and a Loggerhead Kingbird best. We drove back to the coast and Cabo Rojo in the extreme SW corner of Puerto Rico where we saw 2 Caribbean Martins, another new bird. We saw several species of waders en route including a Snowy and 3 Wilson’s Plovers and 6 Least and 20 Semipalmated Sandpipers with Puerto Rican Tody and Troupial nearby. We drove north up the west coast to join the main highway which we followed north then east along the north coast to Parador Guajataca, a journey of about 100km. Here the main attraction was White-tailed Tropicbird and we looked down on 6, a Brown Pelican and 10 Magnificent Frigatebirds. Our final destination was Guajataca Forest Reserve, about 15km inland. Here we saw Puerto Rican Lizard Cuckoo, 4 Puerto Rican Todies, 4 Red-legged Thrushes, Ovenbird, American Redstart, Parula Warbler and Puerto Rican Bullfinch. With nowhere obvious to camp we spent the night sleeping out on the observation platform, to the sound of Puerto Rican Screech Owls. We’d seen them so well the previous evening we left them too it.
The main bird we were hoping to see at Guatajaca was Key West Quail-Dove. Having failed the previous evening early morning on 12 April seemed to offer our best chance and so it proved with two seen well along the trails. We also recorded 10 species with names starting Puerto Rican, being Lizard Cuckoo, Screech Owl, Emerald, Tody, Pewee, Flycatcher, Bullfinch, Spindalis and Vireo although the first two were only heard. A female Scarlet Tanager was, according to our field guide, very rare on Puerto Rico while a male Black-throated Blue Warbler was a welcome addition to the trip list. We returned to
the coast at Parador Guajataca to binge further on White-tailed Tropicbirds seeing 9 and 10 Caribbean Martins. Nearby wetlands produced 2 American Coot, a Belted Kingfisher and our first 2 Cave Swallows (we later saw another 10). We returned to San Juan via Comerio where we found 5 Plain Pigeons. We’d seen pretty much all we could have expected on Puerto Rico, the Parrot was really a non-starter, so we decided to spend the afternoon in San Juan looking for Java Sparrows. Our Lonely Planet Guide even included a (mis-labelled) photo of four sat on a rock so we assumed it would be a formality. It wasn’t with three hours walking around the Old Town and castle walls only producing 2 Monk Parakeets, 3 House Sparrows and a Black-faced Grassquit. We continued on to Playa Seven Seas for out last night in Puerto Rico arriving late and putting up our tents in the dark. 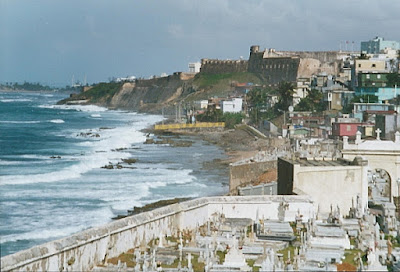 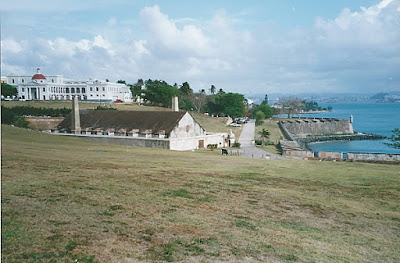 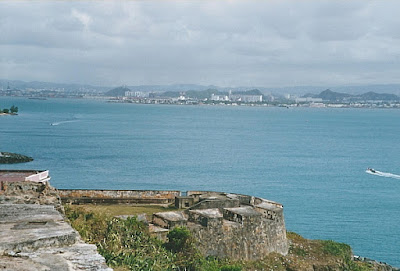 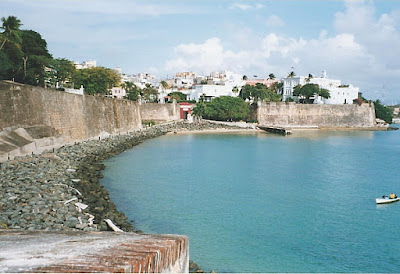 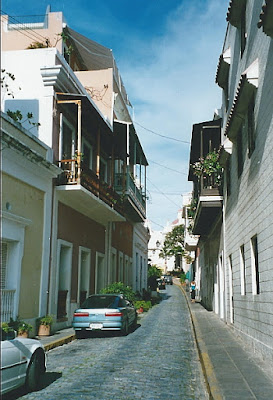 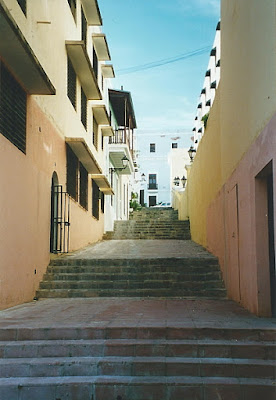 On 13 April we took down the tents and spent an hour or so birding at Playa Seven Seas seeing almost 40 species. None were new for the trip but they did include 2 White-crowned Pigeons, 2 Mangrove Cuckoos, male Green-throated Carib, male Antillean Crested Hummingbird, Belted Kingfisher, 2 Puerto Rican Woodpeckers, Cave Swallow, male Cape May Warbler and 3 Northern Waterthrushes. There was no one about to pay when we left but we were not too bothered as on my earlier visit I was told that they had a two night minimum policy. We drove back to San Juan Airport, handed back the car (in which I unfortunately left my soft binocular case under the drivers seat) and boarded our flight to Santo Domingo. Puerto Rico had been very successful, I'd seen 98 species of which 37 were new. It was an easy place to travel around and go birding, we were expecting the Dominion Republic would be more taxing ...