Wednesday 27 November. Another grim looking day, I took Cookie to Brooklands where between showers an excellent Cetti's Warbler, Chiffchaff, 2 Firecrests, 5 Goldcrests and a Mistle Thrush.Just 3 Teal and 4 Little Grebes were seen on the lake with 100 or so very ordinary looking gulls. Hearing a Pheasant on the rough ground between the lake and the A259 was unexpected.
Tuesday 26 November. A return visit to the Cuckmere where I spent 3.5 hours checking through a fairly static flock of about 900 gulls of which 700 were Great Black-backs. Several Yellow-legged Gulls were obvious and again I saw what I took to be a third-winter Caspian Gull although the one useful image I obtained of it, while perhaps not representative, was rather off-putting. It also added to my unease about the third-winter seen on Sunday so I'll have to try again. As well as this bird I ended up seeing at least 6 Yellow-legged Gulls (5 adults and a second-winter), 3 argentatus Herring Gulls, 2 colour-ringed Great Black-backed Gulls (too distant and in too long grass to read), a neatly hooded Lesser black-backed Gull, 8 Brent Geese and a Sparrowhawk.

Monday 25 November. Possibly my worst ever visit to Mill Hill with Megan and Cookie where I saw single Blue Tit and Robin and no thrushes at all. Followed at low tide by one of my worst visits to the Adur with Little Egret, 6 Redshank and 200 Herring Gulls.
Sunday 24 November. I spent from 08:45-15:30 in the Cuckmere, partly with Matt who had done really well the previous day when I had been put off by some early rain. I spent three hours checking at the gull flock which was very jumpy. Most obvious amongst at least 400 Great Black-backed Gulls were several Yellow-legged Gulls, mostly adults. Fairly early on I saw what I took to be a third-winter Caspian Gull but it soon sat down out of sight and despite much effort I never saw it again, presumably flying off and not returning during one of the regular scares. Later I met Matt and we went above the road to check what turned out to be a few gulls up there. We then tried the east side of the Cuckmere look for the Water Pipit he'd seen the previous day and again that morning but it wasn't in its usual place. I returned for another hour with the gull flock increasing my Yellow-legged Gull total to 5-6 adults, a third-winter and 2-3 second-winters. Other birds seen in the Cuckmere were a Bar-headed and 2 Egyptian Geese, Goldeneye, Kingfisher, 2 Chiffchaffs, 2 Goldcrests, male Stonechat and about 20 Rock Pipits. Checking my gull images at home I was disappointed to find that none of the few I had taken of the Caspian Gull had come out, unlike virtually all of my Yellow-legged Gulls. some of which follow: 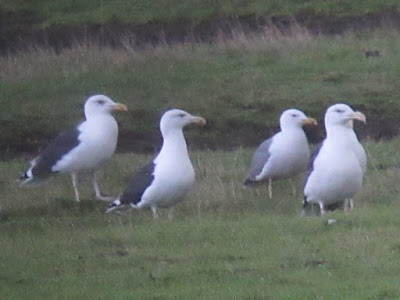 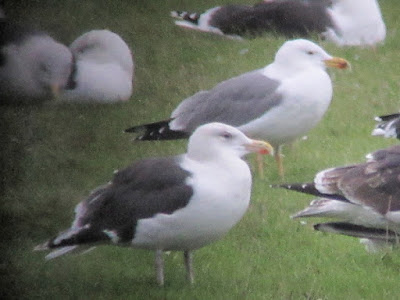 Saturday 23 November. I'd thought of trying the Cuckmere for gulls but early rain in Shoreham put me off. I took Cookie to Shoreham Fort where two Purple Sandpipers and 2 Turnstone were roosting on the wooden jetty. The Greenfinch flock was still present and I estimated at least 45. Smart birds when one stops to look at them. The Greenshank and 25 Redshank were opposite the houseboats as the tide came in. Later a visit to the Adur at low tide to check the gull roost produced two North Thames Herring Gulls. A7HT was my 250th reading of a gull's colour ring on the Adur between the Railway Line and A27 flyover and not one I'd read before. My 4th reading of X6NT was my 251st, involving 154 individuals of 8 species (88 Herring, 36 Great Black-backed, 8 of both Lesser Black-backed and Common, 7 Mediterranean, 5 Black-headed and single Caspian and Yellow-legged).
Friday 22 November. Megan and I took Cookie up to Nymans in the afternoon when dogs are allowed on short leads. It was virtually birdless (so not much different from previous visits) with Buzzard, Nuthatch and 10 Greenfinches seen. Nice to see the array of autumn colours both there and on the journey.

Thursday 21 November. Nice to see a flock of 40 Greenfinches at Shoreham Fort with Cookie, otherwise just 5 Turnstone on the rising tide. Later we walked a circuit around the Adur seeing 5 Oystercachers, 91 Lapwing, 2 Grey and 21 Ringed Plover, 11 Redshank and 8 Linnets.
Posted by richard fairbank at 16:50