Introduction. Barry was planning a trip to Myanmar and asked if I was interested. I was and Gary and Simon were soon on board too. Simon dropped out when he realised he’d be in Taiwan at the time and we were fortunate to recruit Duncan instead. Barry had been in touch with Moe (moe@myanmartravelexpert.com, www.myanmarbirding.com) who arranged the trip for us and guided us for a day around Yangon. Barry negotiate a time when Moe’s top guides Ko Thet (Bagan & Mount Victoria) and Ko Pan (Inle & Kalaw) were available and the trip went very smoothly. We would thoroughly recommend Moe and his expert guides to anyone thinking of birding in Myanmar. The following is the first of three blog posts on the trip from my perspective. It is illustrated by images taken with my Canon SX60 Bridge Camera which seems to be reaching the end of its life. Barry and Gary had very impressive Olympus 4/3rds set ups and took way better pictures than I did, although I suspect that they were better photographers than me to start with. A few of Barry's and Gary's are kindly included here.


Friday 10 January. Megan dropped me at Shoreham Station, the train to Victoria was on time and the tubes OK although sardine standing on the Piccadilly Line wasn’t much fun with a rucksack. Despite my being a bit early Barry Wright and Gary Howard were already by the Thai check-in counters and Duncan Brooks arrived 20 minutes later. Check-in was straight-forward and we departed on time for our 11.5 hour flight to Bangkok.

Saturday 11 January. Our flight in a Boeing 777-300 wasn’t very comfortable and I didn’t sleep well although were well fed and I watched a couple of films including the Art of Racing in the Rain which was excellent. We arrived in Bangkok an hour early due to tailwinds giving us three hours before our flight to Yangon. No birds were seen at Bangkok Airport although little effort was made. It was a 75 minute flight, immigration and baggage collection were very smooth. Moe was waiting for us with a van to take us to Inyar Lake Hotel, 30 minutes drive south. It looked very posh although we couldn’t see the lake in the dark.

Sunday 12 January. We left the hotel in the dark at 05:45 with a packed breakfast which we ate in a restaurant north of the airport and on the way to Hlawgar Park. We arrived at a track just outside the park at 06:50 and in the next couple of hours saw Ayeyarwady and Davison’s Bulbuls (both endemic but pretty drab) and a decent selection of open scrub birds. It hotted up quickly and we were soon hunting what shade was available. We drove a short distance to another track through open woodland and out to a small lake. More than half the lake was dry or covered in water lilies where a handful of Bronze-winged Jacanas were feeding. We briefly tried a third area on the edge of the park where a White-rumped Shama was best. Other highlights of the morning were Chestnut-headed Bee-eater, Racket-tailed Treepie and Radde’s, Tickell’s and Thick-billed Warblers. We returned to a restaurant for lunch before Moe dropped us at the airport for our flight to Bagan’s Nyaung U Airport, an Air KBZ ATR-72 that was half an hour late leaving. We arrived at Bagan 80 minutes later at sunset. We were met by Ko Thet, our guide for the next nine days. We were driven to our accommodation but due to a mix-up were initially taken to the wrong hotel with Ko Thet only realising our booking was for another when we’d downed the complimentary drinks. Our destination, the Bawga Theiddhi, was almost as posh and served very good food. I was to learn its rather small grounds were surprisingly good too. 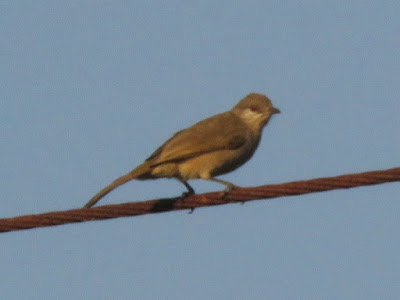 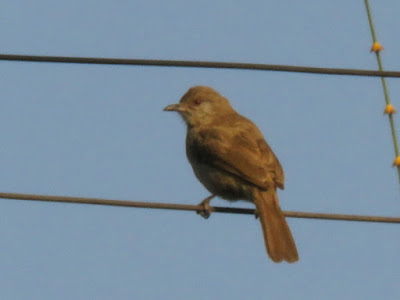 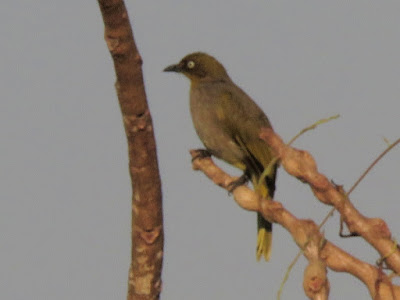 Monday 13 January. We had breakfast at 06:00 and departed at half past for the short drive to Old Bagan, arriving at about the time as the first tourist hot air balloons. We birded areas of acacia scrub and grassland patches surrounding the numerous pagodas for several hours before finding a superb Hooded Treepie. Other endemics White-throated Babbler and Burmese Bush Lark were common as was the distinctive eye-ringed race of Collared Dove. We also saw the recently split Brown Prinia, not that I’d seen any anywhere else, Spotted Owlet, Red-wattled Lapwing, Wryneck, Rufous Treepie and Paddyfield Pipit but the much sought after Jerdon’s Minivet eluded us. We visited a nearby local restaurant for lunch and were back at the hotel at 12:30 for the heat of the day, although it wasn’t as hot as I’d feared it might be. The hotel had a small rough grassy ‘garden’ which backed onto similar habitat to some of the areas we’d visited. I had two hours before we were due to go out again and made the most of it exploring behind the hotel although it being very flat I soon lost sight of the hotel and any other landmarks and had to leave a couple of strategically placed pieces of paper to guide me back. I flushed a Chinese Francolin and saw Grey-backed Shrike, Dusky, Radde’s and Tickell’s Warblers and families of White-throated Babblers and Rufescent Prinias. Back in the garden I flushed without seeing what I assumed was a Rain Quail before another 5 came up from under my feet and moments later at least 5 Spotted Owlets exploded out of a palm tree. At 14:30 we drove to another site in Old Bagan, still no minivets, and walked to a meander of the Ayeyarwady, the river itself being at least a km away. We saw 9 River Lapwings, Sand Lark, White-tailed Stonechats, a Striated Babbler and several smart leucopsis White Wagtails. We returned to Old Bagan for a final unsuccessful look for Jerdon’s Minivet but did see Indian Nightjar and heard Indian Stone Curlew at dusk. We had a meal in Bagan before returning to the hotel. I had a disturbed night worrying about seeing Jerdon’s Minivet, just like twitching in the UK! 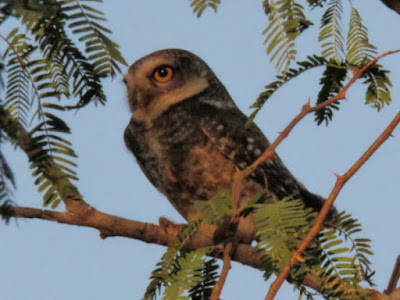 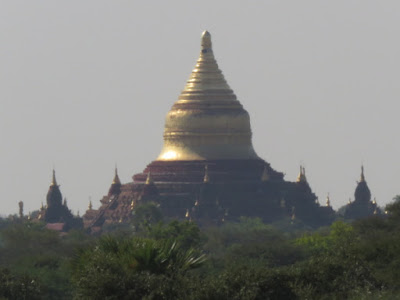 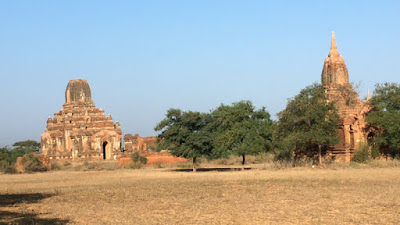 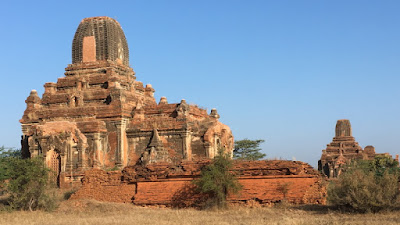 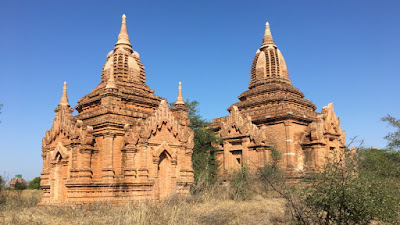 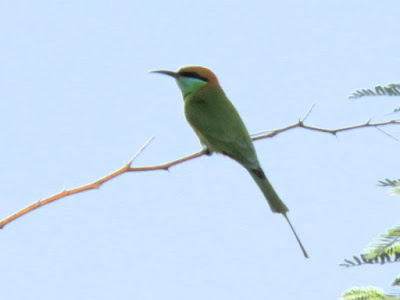 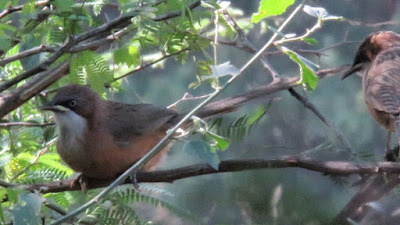 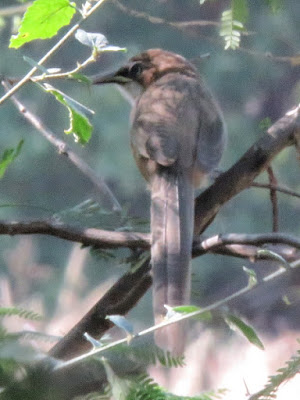 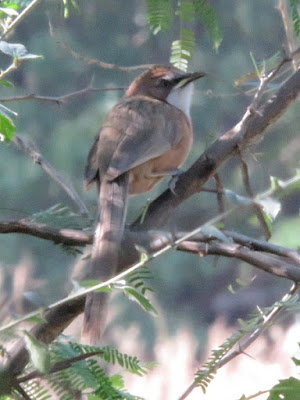 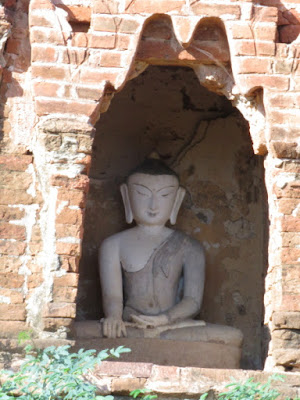 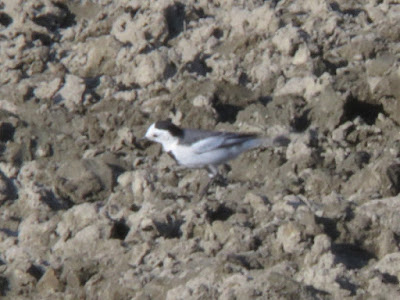 Tuesday 14 January. We had breakfast at 06:00 and departed soon after half past for the large riverside pagoda used by Laggars as a nest and roost site. We arrived at about 07:00, well after dawn and searched for half an hour but there was no sign of any. It was likely we were too late, although a Blue Rock Thrush was nice. At the pagoda we changed vehicle and drove to a more open part of Old Bagan. We spread out and I’d seen a Spotted Owlet when our new driver Win called us back, he’d found a Hooded Treepie near the van which gave decent views. Keen and equipped with binoculars, Win was being trained as a bird guide by Ko Thet and appeared to have all the necessary qualities. We birded a more cultivated area with scattered acacias and pagodas and at about 10:30 hit gold when Barry found a pair of Jerdon’s Minivets. We rushed over and obtained good but somewhat brief views before they moved off along the edge of a field and disappeared completely despite our attempts to refind them. We tried another area seeing Yellow-streaked Warbler and another Brown Prinia. Back in town we had a decent lunch and were back at the hotel at 13:00. I spent most of the time in the hotel garden where the Spotted Owlet family took most of my attention. They were in the tree they had flushed out of the previous day and by keeping my distance remained there, all six of them. We left the hotel at 14:30 and drove to the riverside pagoda where no Laggars were in evidence. From there it was a short walk to the river where Ko Thet had arranged a boat to take us to an island a km or so down the Ayeyarwady. Here we saw Ruddy Shelduck, male Pied Harrier, Wood Sandpiper, White-tailed Stonechat, Eastern Yellow Wagtail and Red Avadavat. We were back at the pagoda at 17:30 and after an anxious 45 minute wait, and much to our relief, a Lagger flew in and roosted on the tower high above us. It was five minutes after sunset but fortunately the pagoda’s tower was floodlit enabling us to see some plumage detail. We had another decent meal in town and were back at the hotel at 20:15 for log and notes. A very successful day, my worries were now switched to White-rumped Falcon for which Ko Thet knew a couple of sites on the way to Mount Victoria. 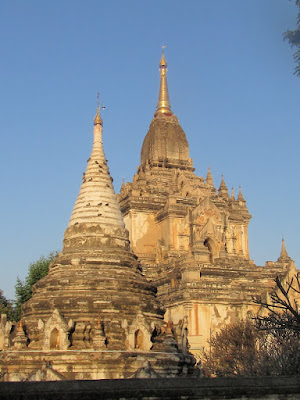 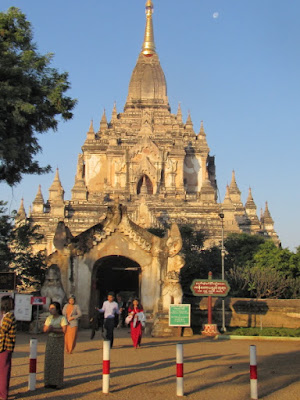 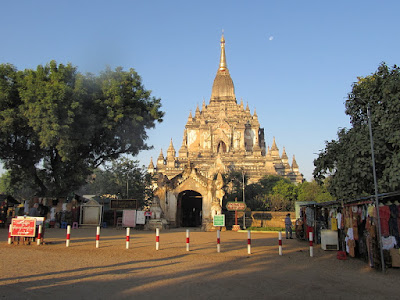 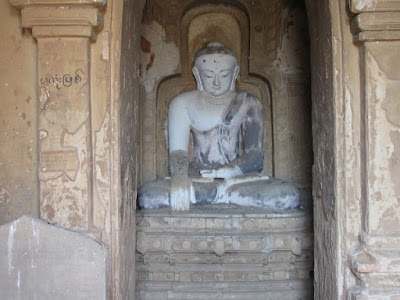 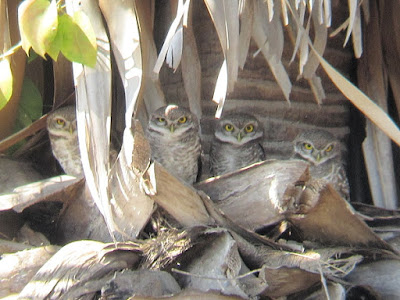 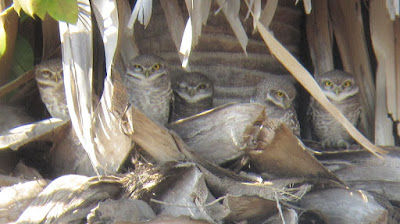 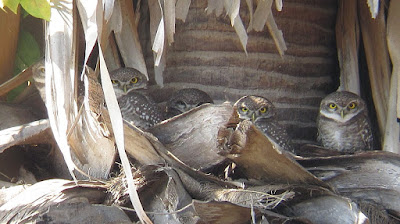 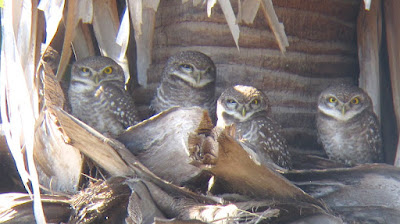 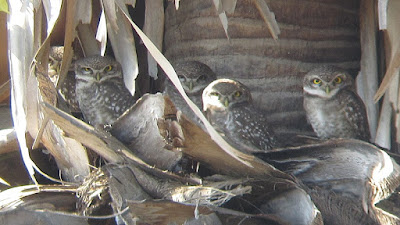 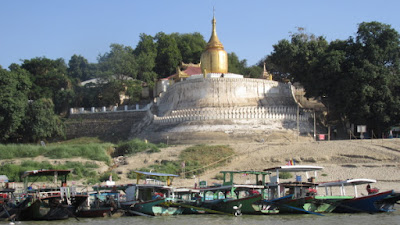 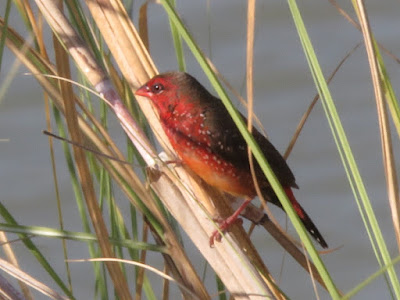 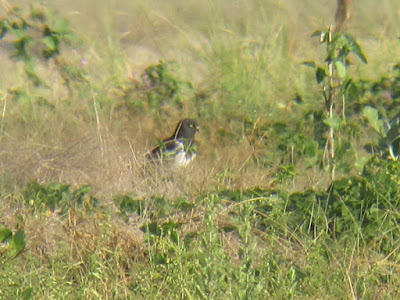 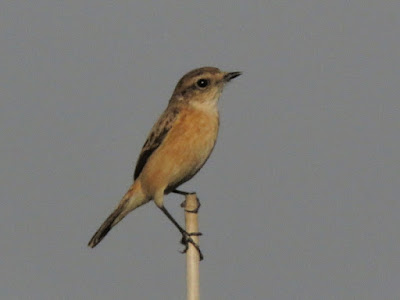 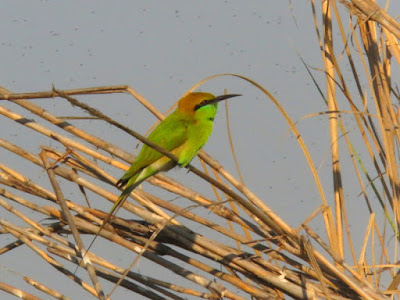 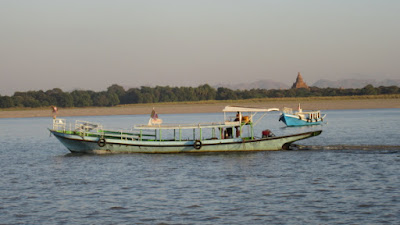 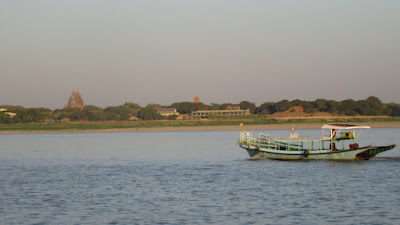 Posted by richard fairbank at 12:35