Wednesday 22 April. I cycled to Shoreham Beach where I saw 17 Mediterranean Gulls (16 adults and a first-summer), 10 Sandwich Terns, a close dark morph Arctic Skua, 14 Whimbrel and 2 Bar-tailed Godwits flying East, although the highlight was 2 Slavonian Grebes on the sea in full summer-plumage as well as 3 of the more usual Great Crested Grebes. No waders on the Adur and I continued cycling up the old railway line on the Downs Link seeing little other than Blackcaps as I went. Near Streatham Bridge I chained my bike up only to immediately realise when it clicked shut that the lock's key was missing. I walked to West Mill hearing 2 Nightingales and a pair of Tawny Owls and seeing 4 Lapwings, a Cetti's Warbler and 2 Lesser and 3 Common Whitethroats. I phoned Megan, who was now back from the allotment and told here were a spare key might be, having forgotten I'd moved them. She kindly drove up to collect me, saving a very long walk and I found what I was pretty sure was the spare key in the garage. Later I emptied my boot and took my car back to Woods Mill and walked back to the bike seeing one of the Nightingales and a Red Kite on the way. Moral of the story - best not to venture too far from home. Postscript. The following morning I found my bike lock key on Shoreham Beach, fortunately I'd been sat just above the high-tide mark.
Tuesday 21 April. Very little seen while at Widewater with 3 Whimbrel, a Bar-tailed Godwit, 6 Sandwich and 3 Common Terns, a Fulmar and 7 Gannets flying East. The Black-tailed Godwit and 2 Whimbrel were seen on the Adur and a Swift (my earliest in the UK by a day) and 2 Blackcaps at Mill Hill where a Nightingale was singing loudly.

Monday 20 April. With a hint of East in the strengthening Northerly wind I cycled down to Widewater. It was very clear and little was moving. I saw 5 Brent Geese, about 12 very distant Scoter, 2 Red-breasted Mergansers, 7 Whimbrel, 13 Black-headed, 2 adult Mediterranean and 6 Common Gulls, 15 Sandwich Terns, 4 Fulmars and 17 Gannets flying East. An unidentified auk flew west and a Carrion Crow and Swallow came in. I returned by the Adur seeing the Black-tailed Godwit, a Whimbrel and a colour-ringed first-summer Mediterranean Gull.
Sunday 19 April. The continual Northerly winds were getting to me so I deserted the coast and took Megan and Cookie up to Lancing Ring and Steepdown. The car park had been closed by the Council so everybody was parked along the roads outside. Quite a few people were walking dogs, cycling or jogging but it was easy to obey social distancing rules. Sky Larks were singing everywhere (I saw 11) but otherwise it was rather quiet. I saw 2 Buzzards, 2 Great Spotted Woodpeckers (and heard a Green), Chiffchaff, Blackcap, 4 Stonechats, a female Wheatear, 4 Meadow Pipits and 6 Corn Buntings.
Saturday 18 April. I cycled to Widewater, Shoreham Fort and Beach, New Salts Farm and the Adur. There were at least 11 mobile Wheatears on the rock groynes at Widewater, easily the day's highlight. Eight were visible on one scan and several looking good for Greenland. A newly arrived Willow Warbler quickly worked its way up a groyne and 8 Swallows came in as did a Yellow Wagtail although I failed to see it. Although or maybe because visibility out to see wasn't great a number of birds were moving. Flying east I counted 22 Brent Geese, 56 Whimbrel, single Bar-tailed Godwit and Sanderling, 12 Black-headed, 2 adult Mediterranean and 6 Common Gulls, 2 Red-throated Divers, 3 Fulmars, 32 Gannets, 86 Sandwich, 170 "commic" and a Little Tern, a dark-morph Arctic Skua (my first skua of the year, it felt long overdue) and a Grey Heron. Although most were close few of the commics were identified as they were passing too quickly (or perhaps more likely I'm slowing down). Nine were considered to be Arctics and 29 Common Terns. Twenty-six Turnstones were roosting on the wooden jetty by Shoreham Fort at high tide, Cetti's and my first Reed Warbler were heard at New Salts Farm and on the muddy margins of the Adur (it was a very modest high tide) were two Bar-tailed and a Black-tailed Godwit. 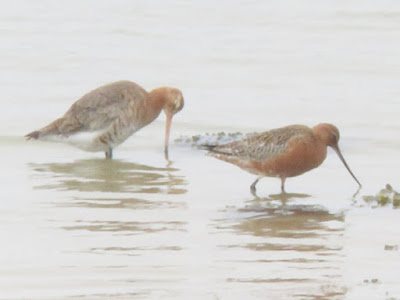 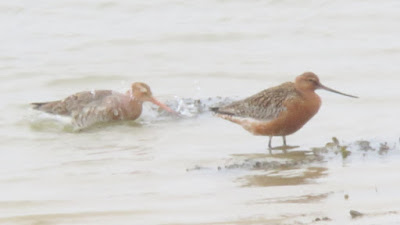 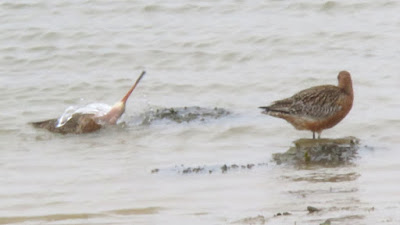 Posted by richard fairbank at 19:57