Shoreham and the opportunity to escape (26-30 March)

Tuesday 30 March. Another quiet day in Sussex. An hour at Widewater before the wind turned to the south was more than enough for me with just 22 Brent Geese, 8 Mediterranean Gulls and 5 Sandwich Terns seen flying east. None were close and a dreadful haze/glare made even them a struggle to identify. Two Great Crested Grebes and a Seal with a fish were on/in the water and 6 more Sandwich Terns were sat on buoys away to the west. After an early return home Megan and I took Cookie up to Mill Hill. Here we saw a Buzzard, 4 singing Chiffchaffs, 3 Song Thrushes, a Linnet, 2 Goldfinches and a singing Yellowhammer. A Sky Lark was also singing but remained unseen.

Monday 29 March. With the end of Stay at Home I was not the only Sussex birder heading out of the county. I joined several others at Ockley Common where the wintering male Rustic Bunting was in almost full breeding plumage and looking rather special. Despite some seed having been put out it remained out of sight for much of the time I we were there. The two Little Buntings were even more wary and I only saw one in flight. Also seen were Curlew, Sparrowhawk, Red Kite, 2 Buzzards, 2 Wood Larks, a male Dartford Warbler, 6 Stonechats, 3 Redpolls, 4 Crossbills and 4 Reed Buntings. The Burgh on the way home produced 2 each of Red-legged and Grey Partridge, 4 Stock Doves, 3 Red Kites, one of the released White-tailed Eagles, 4 Buzzards, 2 Ravens and 6 Yellowhammers. A brief call in at Patching Sewage Works was well timed, coinciding with an appearance of the Yellow-browed and a Willow Warbler. 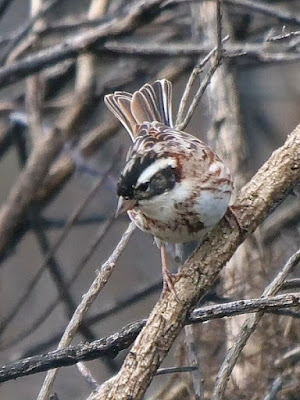 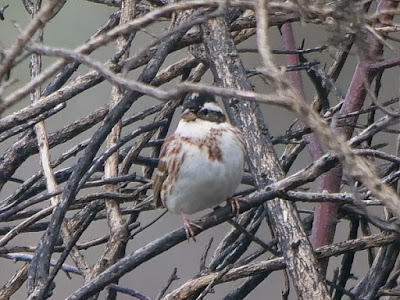 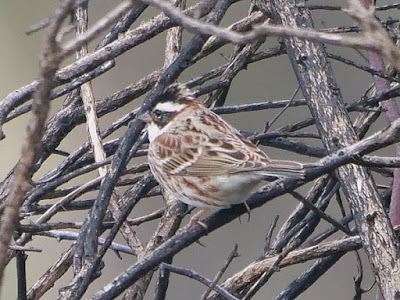 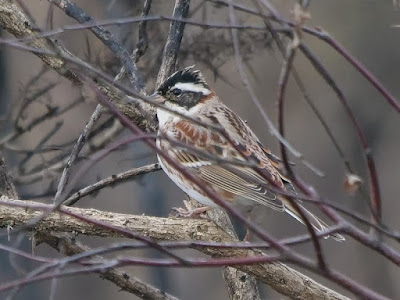 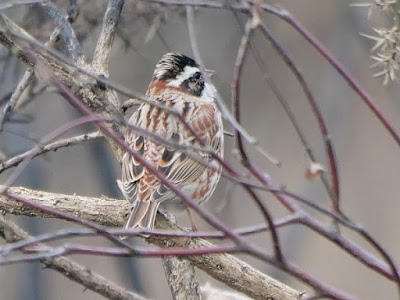 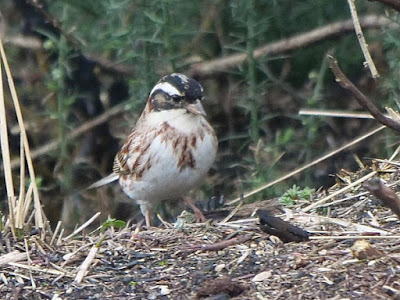 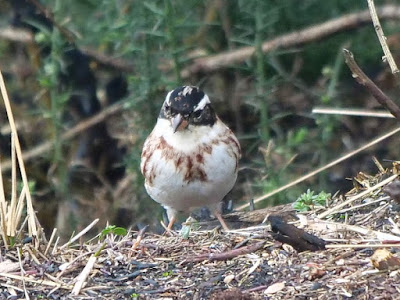 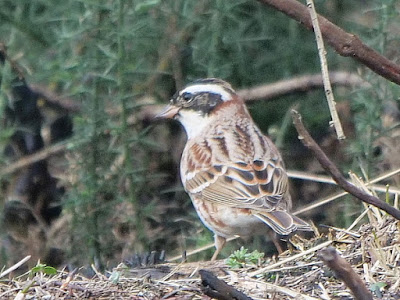 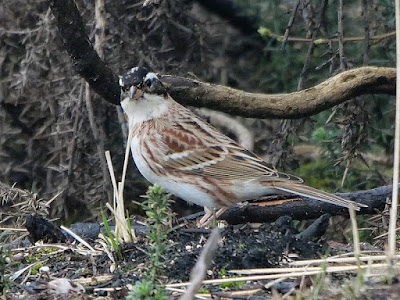 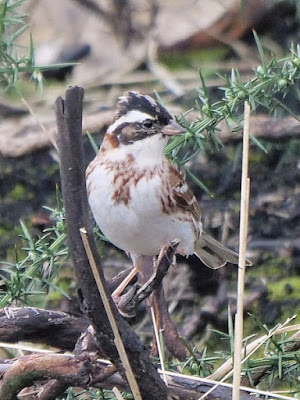 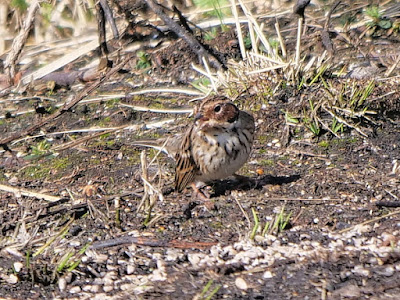 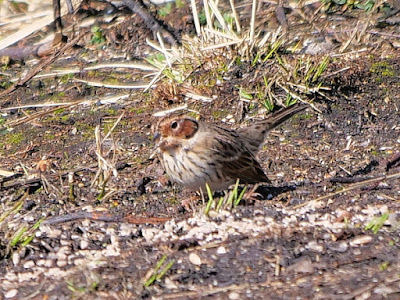 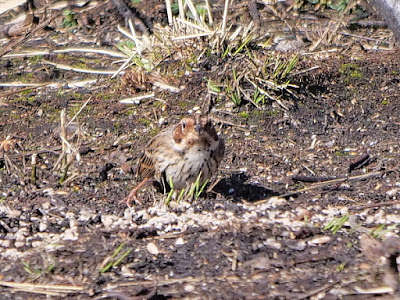 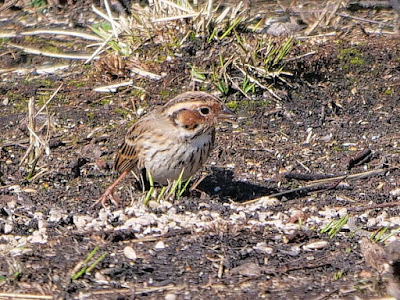 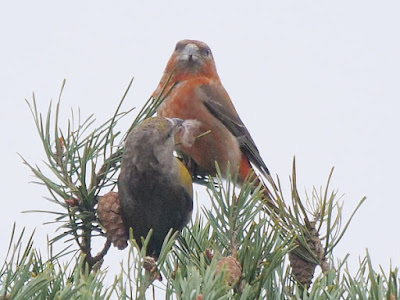 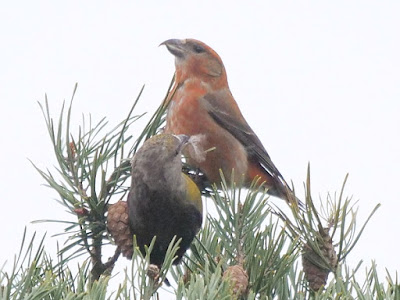 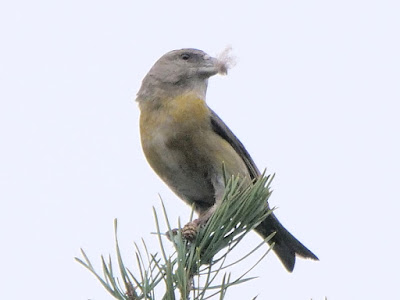 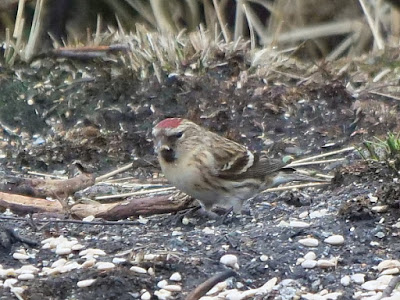 Sunday 28 March. I seawatched from Widewater in a cold,  strong SW from 07:30-10:30 being joined by David B and Matt P. I saw 2 Brent Geese, 10 Common Scoter, 8 Red-breasted Mergansers, 5 Kittiwakes, 8 adult Mediterranean Gulls, 3 Sandwich Terns and 5 distant/Red-throated Divers flying east. A second-summer Mediterranean Gull and 33 Gannets flew west, a Great Crested Grebe was on the sea and 14+ Meadow Pipits came in. A pre-high tide visit to Shoreham Fort failed to produce the Purple Sandpipers although 23 Turnstones were on the beach while a Grey Plover, Curlew, 2 Redshank and a Greenshank were seen from the RSPB Adur Saltings viewpoint. The afternoon was spent listening to the first F1 Grand Prix of the season - a real cracker.

Saturday 27 March. The Patching Yellow-browed Warbler proved too tempting when I realised it was under 10 miles/20 minutes drive from home. It took a while to show and was then very active making obtaining photos difficult but performed pretty well for the handful of socially distanced observers present. I also saw about 8 Chiffchaffs and a male Blackcap, the latter my first of the year. One of the Chiffchaffs was noticeably paler but to my eye lacked the warm buff supercilium and face that I would expect to see if it were a tristis. It was silent. 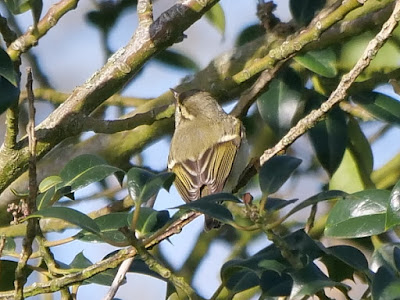 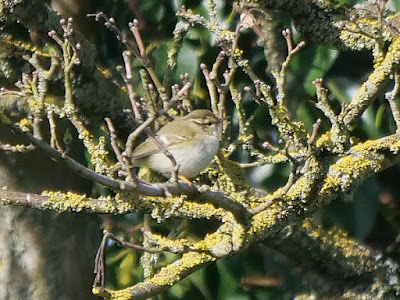 Friday 26 March. I seawatched from Widewater from 07:05-08:50, sheltering in the lee of a beach hut from the strong SW wind. Forecast showers did not materialise and it was very clear. Passage was somewhat disappointing although did include a Little and 17 Mediterranean Gulls, all adults flying east. Also seen were 8 Common Scoter, Great Crested Grebe, 36 Black-headed Gulls, 3 Sandwich Terns, 17 Red-throated Divers, 4 Fulmars and 105 Gannets. At low tide I took Cookie down to the Adur and walked up towards Cuckoos Corner to check the gull flock. Few were present and the one with a ring, a local Herring Gull, flew before I could completely read or photograph it. Two Oystercatchers (the only waders seen - no Redshank), 2 Little Egrets and a Sparrowhawk hardly made the visit worthwhile.

Posted by richard fairbank at 16:18