More to see around Shoreham (25-29 November)

Monday 29 November. Megan and I took Cookie to Widewater and we walked along to Lancing Beach Green and back. On the lagoon we saw 4 Mute Swans, 4 Teal, the red-head Goosander (found by Matt the previous day) and 5 Little Grebes with 6 Great Crested Grebes, 4 Razorbills and a Red-throated Diver on the sea but nothing obvious moving offshore. A male Stonechat was by the car park. In the afternoon I drove up to Steyning Bowl and walked down towards Steepdown before returning to the Langmead cairn for a raptor watch. After five minutes of scanning I picked up the hoped for ring-tailed Hen Harrier hunting over the east side of Lychpole Bottom but it soon dropped into the game crop and I didn't see it again despite remining in the area until dusk. Also seen during the two hours I was in the area were Stock Dove (just one), Buzzard, 3 Kestrels, Raven, 2 Skylarks, Fieldfare, 25 Pied Wagtails, 15 Linnets and a Corn Bunting. 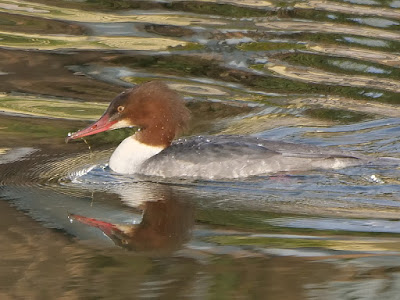 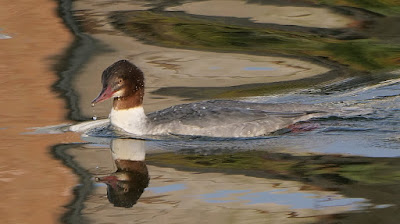 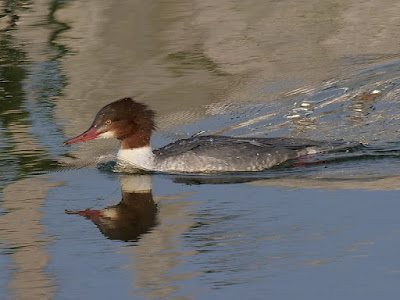 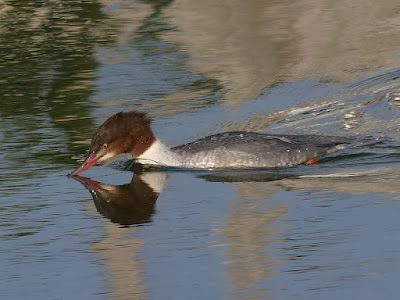 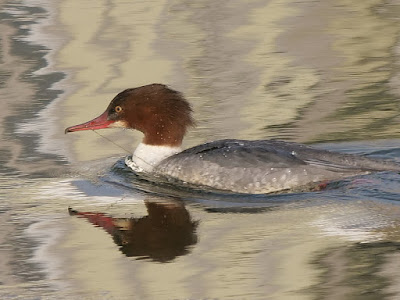 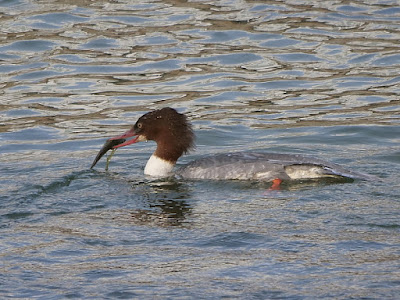 and the thread was gone 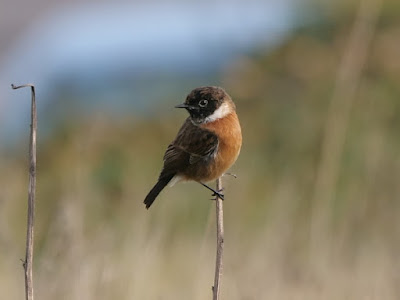 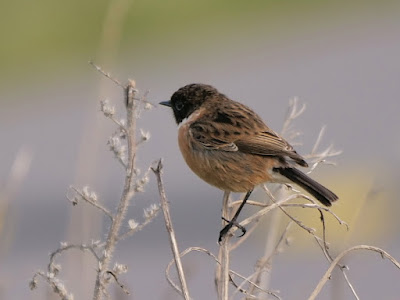 Sunday 28 November. Megan and I took Cookie up to Mill Hill but we saw very little with 4 Redwings best. While walking back news that Matt Palmer had seen a Velvet Scoter drop onto the sea off Widewater which was slowly drifting east. I dropped Megan and Cookie at home, grabbed my scope and drove over. Matt was still in situ and immediately put me onto the Velvet Scoter. It was very distant and had drifted a fair way east in the time he'd been watching it. It did flap though showing its white secondaries. It was drifting slowly east past a yellow marker buoy and I hurried along the beach fairly confident I wouldn't loose it while getting nearer. This worked twice, the second time I used a shredded black flag as a marker while I continued to Shoreham Beach Green. Even then it was still distant and very hard to pick up without a telescope. Also on the sea, but typically closer in, were 4 Great Crested Grebes, a Razorbill and a Red-throated Diver. I picked Nessa and Chris up on my way home, they'd come down from London to visit for the day, and later we all went for a walk around the Adur. I saw 3 Oystercatchers, 50 Lapwings, 2 Grey Plover, 18 Ringed Plovers, 9 Turnstones, 18 Dunlin and 6 Redshank but very few gulls.

Saturday 27 November. Cookie and I walked around the Adur finding little shelter from the strong NW wind. It was low tide but my hopes of there being plenty of gulls to look through did not materialise with 38 Great and a single Lesser Black-backed Gull the most notable. Also beside the river I saw a juvenile Brent Goose, 3 Oystercatchers, 88 Lapwings, 2 Grey and 6 Ringed Plover, 20 Turnstones, 5 Redshank, 9 Skylarks and 3 Meadow Pipits. About 35 Teal and 15 Redshank were in the houseboat channel with the Greenshank by the road on the Dog's Trust side. Mid afternoon Megan and I took Cookie along Southwick Canal which provided some shelter and more views of the Long-tailed Duck (when it wasn't underwater). 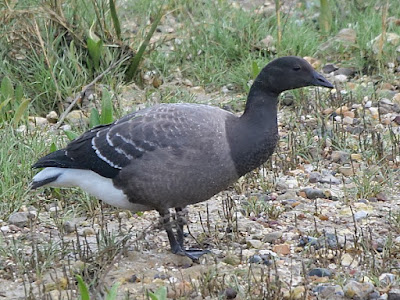 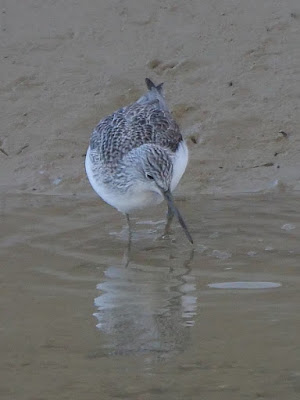 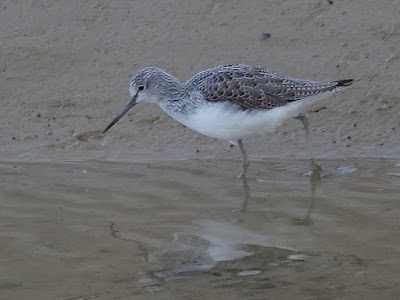 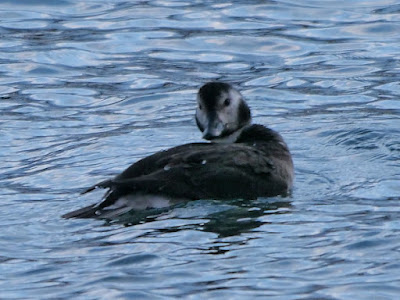 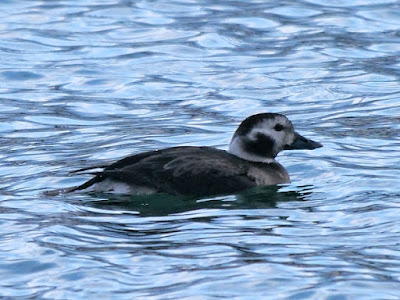 Friday 26 November. I picked up David Buckingham in Steyning and we went up onto the Downs between Steepdown, Cissbury and Steyning Round Hill for the morning in the hope of seeing the Hen Harrier which has been reported several times recently. No luck in four hours of walking and scanning, the last hour from the car where it was nice to be out of the wind and occasional showers. Cookie was able to relax after some earlier shooting coming with a westerly wind from the direction of Findon. Highlights were 8 Grey and 2 Red-legged Partridges, 80 Stock Doves, 2-3 Red Kites, 4 Buzzards, Peregrine, Raven, 12 Fieldfares, Stonechat, 50 Linnets and 2 Corn Buntings. In hindsight an afternoon visit might have been better?

Thursday 25 November. David Buckingham drove me to West Wittering and we walked out to Ella Nore hoping to see the 2 Velvet Scoter which had been present for a couple of weeks. Despite an extensive search as far round as Rookswood we were unsuccessful although a pair of Gadwall provided momentary hope. A Black-throated Diver in the main channel (with 8 Red-breasted Mergansers and 15 Great Crested Grebes) and a flock of at least 300 Golden Plover on the shore before the tide came in were some compensation and 1500 Brent Geese were impressive. We continued on to Church Norton and spent an hour on the seat seeing a red-head Goosander in the harbour mouth, female Merlin on the Tern Island fence and an adult Peregine on a shingle bar. We walked out onto the spit to look at the sea but were distracted by a lot of activity over towards the North Wall with an estimated 1500 Lapwing and 1200 Golden Plover flying around. Maybe the Merlin had disturbed them as the Peregrine was still on the shingle. Towards the end of the spit we eventually saw 12 Great Crested and 7 Slavonian Grebes (2 of the latter close, the rest halfway to Bognor), a Guillemot and in close proximity a Long-tailed Duck and an Eider on a fairly sheltered sea and flushed a Green Woodpecker. Seeing Andrew House we learned where Red Barn Ditch was (a Water Rail had taken to feeding in it). With no Red Barn in sight I'd never have guessed it was the channel from the back of the Sidlesham Ferry Overflow Car Park to the tramway. We called in on our way home and at the far end saw both Kingfisher and Water Rail in fading light along what we renamed the Andrew House Channel. An enjoyable day (despite no photos) and a nice change from repeated visits to sites around Shoreham.

Posted by richard fairbank at 18:59