Monday 18 April. Megan, Nessa, Cookie and I went up to Mill Hill where we saw Peregrine, Chiffchaff, Lesser Whitethroat, 4 Linnets, 4 Goldfinches and the male Yellowhammer. Buzzard, Skylark, Cetti's Warbler and Blackcap were heard. Sadly we failed to find Richard Allen's Ring Ouzel although didn't have long to look.

Sunday 17 April. I seawatched from Widewater from 06:25-08:55 seeing 67 Brent Geese, 8 Teal, 72 Common Scoter, 11 Oystercatchers, 5 Whimbrel, 4 Turnstones, 64 Black-headed, 8 Little and 86 Mediterranean Gulls, 97 Sandwich Terns, Guillemot and an unidentified auk and 17 Gannets. Later Megan, Nessa, Cookie and I did our usual circuit from Harbour Way but clockwise rather than our more usual anticlockwise. We saw a Turnstone and 3 Wall Lizards at the Fort and a summer-plumaged Dunlin from the Adur Ferry Bridge. After a family visit to the cinema I took Cookie to Park Avenue to look for the parakeets. Another blank. Despite looking most days I've not seen them since 10 April. Most of the evening was spent packing. 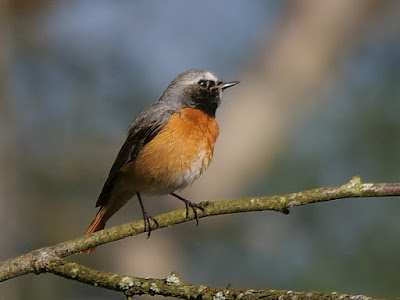 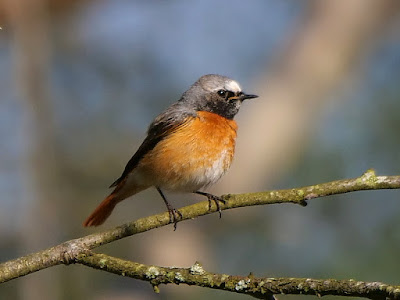 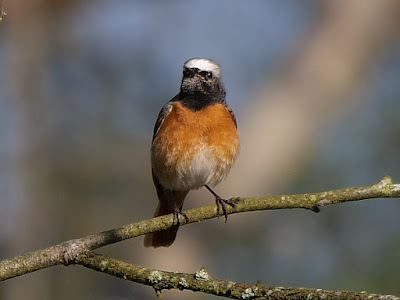 Friday 15 April. I took Cookie to the Beeding Hill car park seeing 2 Jays on the way. We walked along the Monarch's Way, up to Truleigh Hill and back by Room Bottom. I saw 2 Buzzards, 2 Peregrines, Green Woodpeckers, 2 Ravens, 23 Skylarks with more heard, 2 Chiffchaffs, 3 Whitethroats, 7 Wheatears, 9 Meadow Pipits, 5 Chaffinches and 2 Corn Buntings. In the afternoon Megan, Cookie and I walked around Mill Hill seeing Buzzard, Peregrine, and Whitethroat. 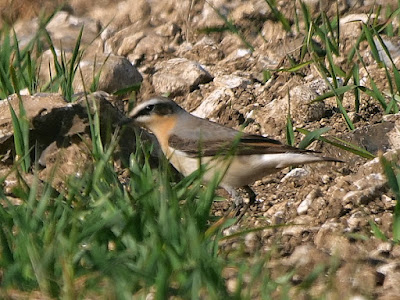 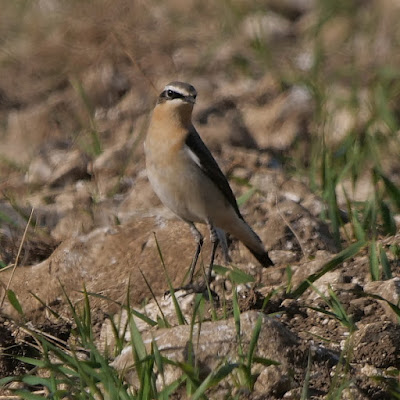 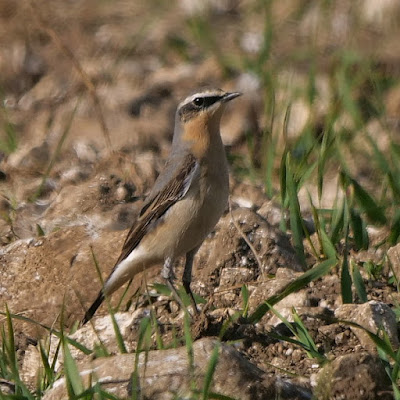 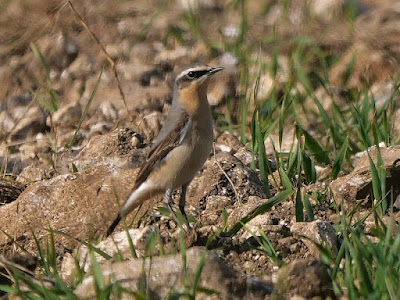 Thursday 14 April. I had a survey to do near the Burgh but was not expecting to wake to fairly thick mist. It was due to clear and I decided to go ahead, not having many other free times to do it. I was able to delay starting until the mist started to clear and I recorded 31 species, maybe a bit below average. They included 14 Grey and 4 Red-legged Partridges, 3 Red Kites, a flock of 5 Jays, Long-tiled Tit, Chiffchaff, 12 Dunnocks, 16 Chaffinches, 2 Bramblings, 2 Greenfinches, 4 Linnets, 11 Goldfinches, 3 Yellowhammers and a Reed Bunting. The only Lapwing seen, one of the habitat's target species, was outside the survey area. Early evening I took Cookie to West Mill to look for Nightingales. I heard two and had good views of one of them. Also seen were Peregrine, Blackcap, Meadow Pipit and 2 Yellowhammers. 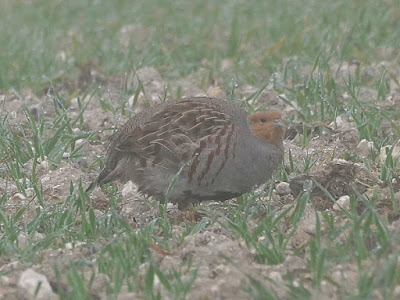 Wednesday 13 April. I seawatched from Widewater from 07:00--08:20. Winds were light southerly and little was moving, at least in sight. I recorded 48 Brent Geese, 3 Shelduck, 9 Common Scoter, 4 Red-breasted Mergansers, single Great Crested Grebe and Whimbrel, 11 Turnstones, 33 Mediterranean Gulls, 55 Sandwich and 3 Common Terns, a Great Skua (on the sea), 2 Red-throated Divers, 2 Fulmars and just 3 Gannets. Megan and I took Cookie up to Mill Hill where we saw Little Egret, Kestrel, Peregrine, 2 Jays, 21 Magpies (19 in one flock), Skylark, my first House Martin (my first hirundine!), Chiffchaff, Greenfinch and Yellowhammer. A late afternoon walk with Cookie failed to find the Park Avenue parakeets.

Tuesday 12 April. Another early start for a Seaford seawatch. I arrived at Splash Point at 06:00, just after Matt Eade and just before Brian Cox with Simon Linington joining us on the breakwater soon after and other regulars dropping by later. Another enjoyable seawatch and although not as varied (or manic) as the previous day it had its moments. By 11:30 I had recorded 49 Brent Geese, 11 Shelduck, 18 Shoveler, 10 Teal, a flock of 15 Eider, 4 Velvet & 588 Common Scoter, 3 Red-breasted Mergansers, 16 Whimbrel, 5 Little, 30 Mediterranean & 15 Common Gulls, 362 Sandwich and 8 'Commic' Terns (1 identified as Common and 2 Arctic), a pale morph Pomarine and 14 Arctic Skuas (1 pale morph), 2 Guillemots, 15 unidentified auks, 48 Red-throated, 3 Black-throated and 5 unidentified  Divers, 53 Gannets and a Grey Heron. An unidentified bat came in and briefly landed on the basket support in front of us. The Pomarine Skua was a pale morph bird which appeared to lack a breast band suggesting it was a male? The Eider were with 10 Shoveler and were seen elsewhere along the coast. Alan Kitson timed them passing Widewater at 06:48, we saw them at Seaford at 07:23. Late afternoon I took Cookie to look for the Park Avenue parakeets but we failed to find them. 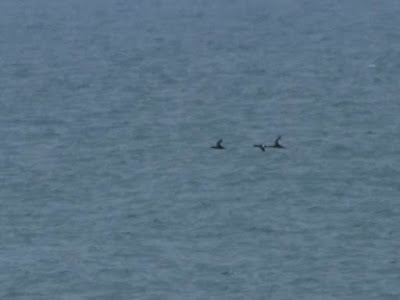 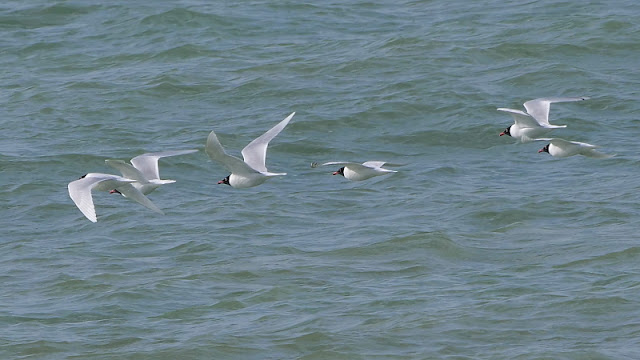 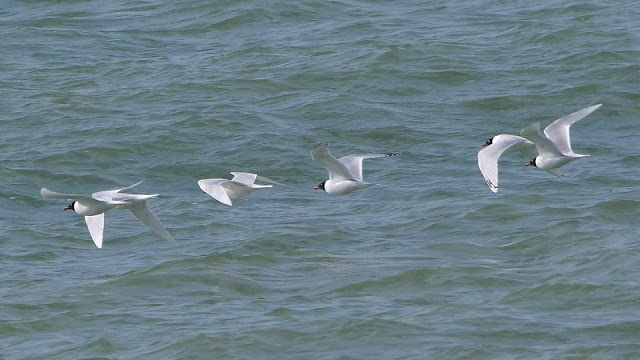 Posted by richard fairbank at 11:22