7th August.  We left our hotel before it got light and drove to PN Calilegua where we spent all day.  Heavy rain made the dirt road difficult for a 2WD car, in places it was very slippery mud, although it went through superb forest right from the outset and we stopped several times, encountering a superb flock of 17 Toco Toucans and a Giant Antshrike.  We were forced to give up on the road just short of the second ranger station at 1100m where we were unable to cross a ford over the Tres Cruces River.  Hearing a White-throated Antpitta calling from the bottom of the very steep valley here was frustrating as it seemed completely inaccessible although if we’d realised it would be our only encounter we might have put its accessibility to the test!  We left the car by the side of the road and continued walking up the road.  Our aim was to get into the upper section of the park where Red-faced Guans could be seen although it took us 3-4 hours at moderate birding pace to get to the top - a ridge at 1700m which marked the edge of the park/forest and where there was an obolisk.  By now it was probably far too late for Guans to be active by the track, at least that was our excuse for not finding any.  We slowly walked back down birding at a more leasurely pace and at dusk we dove to General Guermes where we found a reasonable hotel.  We all felt that the site had more to offer and wished we'd been able to spend longer there.  Birds seen included Tataupa Tinampou, Black & Chestnut Eagle, Red-tailed Comet, Blue-capped Puffleg, Cream-backed Woodpecker, Buff-browed Spinetail, Two-banded Warbler and Plush-capped Finch.

8th August.  We arrived at Palomitas, one of the main Chaco sites, soon after dawn.  We crossed the railway line and drove along a dusty track for about 17kms to a pig farm, making regular stops in dry scrub and open fields along the way.  It soon got very hot, almost unbearably so by mid-morning by which time bird activity had dropped right off but we did see Tutaupa and Brushland Tinamous, Black-legged Seriema, Spot-backed Puffbird, White-fronted and Checkered Woodpeckers, Black-crowned Monjita, Greater Wagtail-Tyrant and Many-coloured Chaco-Finch.  We returned to the main road and drove south to Tafi del Valle being stopped at an impromptu police "drugs" checkpost on the Salta/Tucuman border.  We found the police/military presence to be very low key and this was the only time on the trip that we were stopped.  We spent the last hour of light by the monument in the Rio Los Sosas valley seeing Torrent Duck and White-browed Tapaculo and continued to Abra del Infiernillo after dark.  The wind was whipping up the valley and Mike, who wasn’t a fan of camping, took the car back into Tafi to find a hotel while we battled to put the tents up. 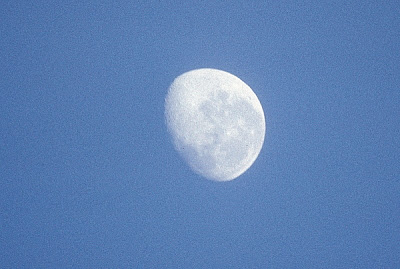 9th August.  A cold and windy morning at Abra del Infiernillo, afternoon around Tafi del Valle.  Birding was hard work today but we did manage to find Tucuman Mountain Finch in a scrub filled gulley near the road. 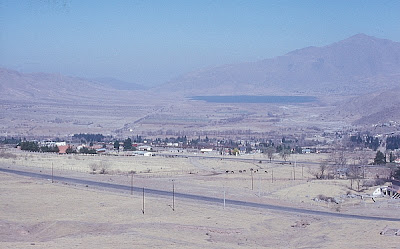 10th August.  We spent the morning descending the Rio Los Sosas valley seeing 3 more Rufous-throated Dippers (at km 41), Torrent Duck, Red-tailed Comet, and Mountain Wren.  We drove to Joaquin V. Gonzales, checked into the Hotel Majorca, and spent the last hour of light back in the Chaco on the Santo Domingo Road seeing Lark-like Bushrunner and White Monjita in the fading light.
11th August.  A morning in the Chaco near Joaquin V. Gonzales walking along tracks off the Santo Domingo Road (at kms 14 & 17) from dawn.  The tracks were too dusty to drive down and it was very hot after the first couple of hours.  Birds seen included Tataupa and Quebracho Crested Tinamous, King Vulture, Black-legged Seriema, Blue-crowned Parakeet, Crested Hornero, Brown Cacholote, Lark-like Bushrunner, Black-crested Finch and Many-coloured Chaco-Finch although finding a roosting Tropical Screech Owl in a dense patch of scrub was very memorable.  We drove to El Rey in the afternoon crossing three fords along the 50km approach 'road', one was across a fairly full river which has us slightly concerned that we’d not be able to leave if it got much deeper.  Despite it being very dry in the Chaco, any rain up in the mountains had to run off somewhere.  We camped in the headquarters clearing and ate rather expensive meals in the hotel there.  A pool 1-2km along the approach road added a few wetland birds while a confiding Red-legged Seriema seemed to have made the HQ clearing its own. 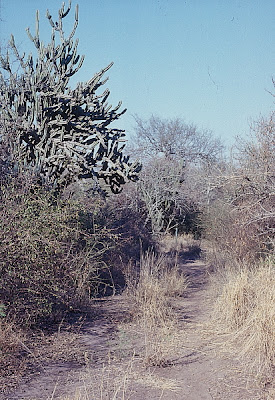 12th August.  All day at Park National El Rey, mostly on Sendero Pozo Verde.  For me the highlight of our visit to El Rey was hearing and then seeing a superb Spotted Nightingale Thrush by the trail.  Other birds included Tataupa Tinamou, Southern Screamer, Red-legged Seriema, 150 Alder Parrots and Plumbeous Tyrant. 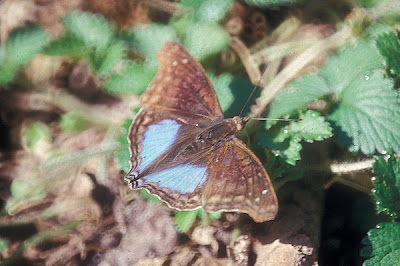 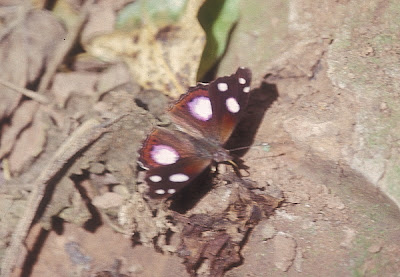 13th August.  All day at Park National El Rey with the morning on Sendero Pozo Verde.  A similar day to yesterday with Tataupa Tinamou, Southern Screamer, Bicoloured Hawk, Rufous-sided Crake, Red-legged Seriema, Rufous-capped Ant-Shrike, Plumbeous Tyrant and the obliging Spotted Nightingale Thrush seen again, although pride of place went to Garry who saw a Jaguarundi.  In hindsight we would have done better with a second day at Calilegua NP and one less at El Rey. 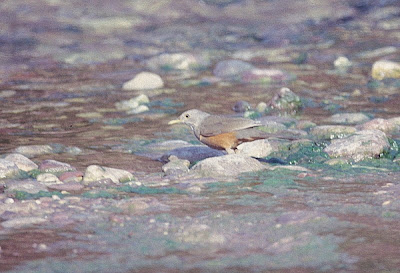 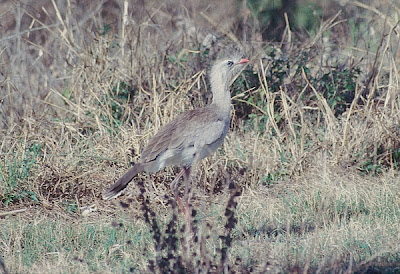 14th August.  We drove from El Rey to Salta via Palomitas and Abra Santa Laura.  We returned the car having done 2635 kms in 11 days and caught the evening flight to Buenos Aires.  We slept in the domestic airport, going into the Aereolinias departure lounge after the last flight had been called.  Locals were doing the same and despite some initial reservations we encountered no problems at all.  A travel day during which we saw Red-legged Seriema, White Monjita, Mountain Wren, Black & Rufous Warbling Finch and Screaming Cowbird (the latter a new bird).
15th August.  We caught the morning flight to Trelew.  It was not possible to get unlimited mileage on a short (3 day) hire which was unfortunate as we had some distance to cover to get to the Valdes Peninsular, our main destination for this section of the trip.  First we headed inland to Gaiman beyond which there was a breeding site for Burrowing Parrot but we saw 21 feeding in fields on the edge of town.  It was hard to drag ourselves away from these superb birds but we had a long drive north to Puerto Piramides where we arrived as the light was just starting to go.  We camped near the beach and walked down to the jetty to listen to the 10-12 Southern Right Whales that were calling from the bay which they used as a nursery – very atmospheric.  Birds seen included Blackish Oystercatcher, Snowy Sheathbill, Band-tailed Earthcreeper, Grey-hooded Sierra-Finch and Long-tailed Meadowlark. 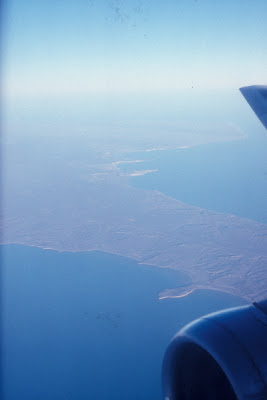 16th August.  All day on Valdes Peninsular, mainly Punta Norte and the northern half, returning to Puerto Piramides when it was dark.  Punta Norte was more disappointing than we were expecting it to be outside of the breeding season, although most interior species were seen from the roadside.  Birds seen included Megallanic Penguin (just one as it was outside their breeding season), Darwin’s Rhea, 23 Elegant Crested Tinamous, Great Grebe, Black-browed Albatross, Imperial Cormorant, Upland Goose, Flying Steamer Duck, Magellanic Oystercatcher, Tawny-throated Dotterel, Two-banded Plover, Snowy Sheathbill, Scale-throated Earthcreeper, Plain-mantled Tit-Spinetail, Patagonian Canastero, Chilean Swallow and Patagonian Yellow-Finch. Also 10 male, 5 female and 20 young Elephant Seals were seen as well as Mara, Guanaco, Skunk, South American Sea Lion and one Southern Right Whale with others heard at night. 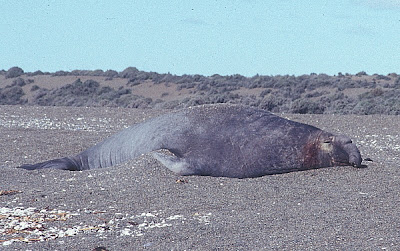 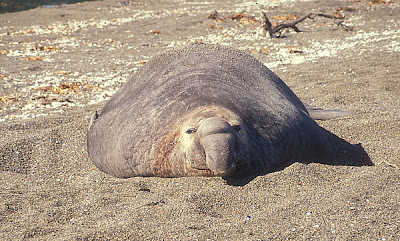 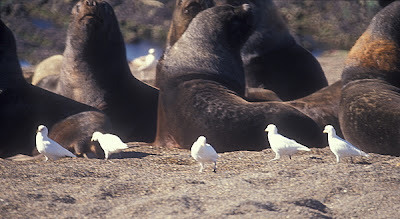 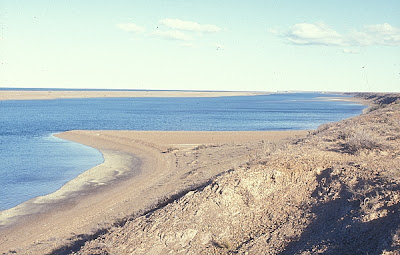 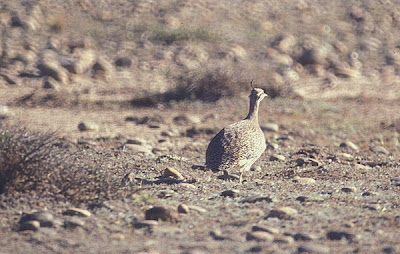 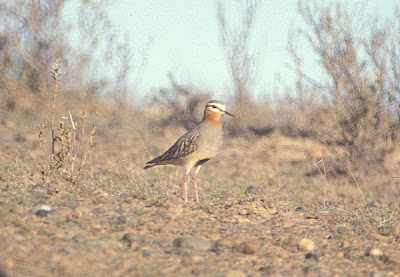 Posted by richard fairbank at 13:36