Introduction.  In 1990 Nick Preston and I were keen to go to Argentina, spurred on by Barry McCarthy’s report of his visit over Christmas 1988/89.  We knew that August, being in the middle of the Austral winter,  was not the best time for a trip but Nick was a teacher so it was the only time we could get away for more than 2 weeks.  Also timing was unlikely to be critical for seeing Rufous-throated Dipper, perhaps our most wanted bird there.  With Garry Edwards and Michael Grunwell also interested the four of us decided to go despite the time of year.  We further took the plunge by including Patagonia and Terra del Fuego on the itinerary as well as the North West and Iguacu.  Mike sorted out the flights to Buenos Aires (£500 each) and Wildwings booked us internal airpass flights (c£200 each for any 10 flights during a 4 week period), although we changed a couple of the dates on arrival.  We intended hiring cars at each location although did not book any in advance.  Our plan was to stay in cheap hotels or camp and eat in cheap cafes and/or buy snack food in supermercados - basically another budget birding trip which ended up costing about £1200 all in.

This blog recounts our 4 weeks in Argentina in August 1990 and is made up from unreliable memories (where I have any at all), inadequate notebook entries and scanned images of very variable quality.

31st July.  I left home somewhat apprehensively as for the first time I was leaving behind a wife and a young daughter.

1st August. We arrived in Buenos Aires after an overnight flight from London.  We changed a couple of internal flights on our airpasses, hired the cheapest unlimited mileage car we could find (from a local firm) at the International Airport and arranged to return it to the Domestic Airport two days later.  We also arranged with the Avis desk to pick up a car in Salta three days later.  We left the airport noting very prominent ‘Las Malvinas son Argentinas’ signs that it would have been very hard to miss.  The Falklands War had been over for eight years but memories of it were very strong and a few comments were made when it became apparent that we were British.  Our usual repost was to mention Diego Maradona’s Mano de dios goal, without adding that we thought him a cheating whatever...  We drove to San Clemente del Tuyu on the coast with several birding stops in marshy areas en route.  We arrived after dark and found a cheap hotel for the night.  Birds seen included Southern Screamer, Black-necked Swan, Chiloe Wigeon, Red Shoveler, Silver Teal, Rosy-billed Pochard, Black-headed and Lake Ducks, Long-winged Harrier, Red-gartered and White-winged Coot, Burrowing Owl, Sulphur-bearded Spinetail, White banded Mockingbird and Brown & Yellow Marshbird.  Seeing seven new species of wildfowl in a day was probably a record for me?

2nd August.  All day birding around San Clemente.  In the morning we visited Punta Rasa where there was a range of habitats - mud flats exposed at low tide, a dry salt marsh with tussocks, scrub and dunes.  A brief seawatch produced a Black-browed Albatross on the sea and 4 flying north.  In the afternoon we visited Campo del Tuyu, an area of pasture about 12km from San Clemente.  A couple of kms down the entrance track was a small marsh from which I flushed a South American Painted Snipe and Stripe-backed Bittern.  The marsh was only about a foot deep but that was enough to ensure my first wet feet of the trip.  Very worthwhile though.  Other birds seen included Greater Rhea, Spotted Nothura, Coscoroba Swan, Two-banded Plover, Red-capped Wren-Spinetail, Hudson’s Canastero, Tufted Tit-Tyrant, White-tipped Plantcutter, Masked Gnateater and a very out of place male Greenfinch right by the point, either an introduction or escape.
3rd August.  We drove back from San Clemente to Buenos Aires with few stops on the way, the best being at the General Lavalle Canal where we saw displaying Great Grebes, Many-coloured Rush-Tyrant and Warbling Doradito.  Returning to the Domestic Airport, we dropped off the car having driven 725km in two days without seeing anything approaching a hill.  The distances were huge, or travels here hardly made any impact on a map and this part of Argentina incredibly flat.  We caught the early evening flight from BA to Salta, picked up our car, booked one for Ushuaia later in the trip and found a reasonable hotel in town.  Birds seen included Spotted Nothura, displaying Great Grebes, Aplomado Falcon, Red-fronted Coot, Many-coloured Rush-Tyrant and Warbling Doradito. 4th August.  We drove from Salta north to Humahuaca with major stops at Abra Santa Laura and the Yala River where our trip target, Rufous-throated Dipper, was readily seen on the river about 7kms from the main road along the Lagunas de Yala track.  They were easily as good as I was expecting them to be.  We stayed in a cheap hotel in Humahuaca where we arrived at dusk.  Other birds seen included Torrent Duck, Red-tailed Comet,  Dot-fronted and Cream-backed Woodpeckers, Creamy-breasted Canastero, Brown-capped Tit-Spinetail, Brown-backed and Patagonian Mockingbirds, Fulvous-headed Brush-Finch and Rusty-browed and Black-capped Warbling-Finches.  Frustratingly I also had a brief view of what I thought was a Slaty Thrush, something regular at other sites we were to visit but not, it transpired, at that time of year.


5th August.  We left Humahuaca and slowly drove to Lago Pozuelos where we spent all afternoon in a very spectacular setting, taking a track to the lake shore from near to the Ranger's House.  We returned and camped by a small school and church near Laguna Larga.  It was very cold – well below freezing - and the thin air expanded a pre-sealed bag of museli almost to bursting point.  Birds seen included Puna Rhea, Chilean, Andean and Puna Flamingoes, Giant Coot, Andean Avocet, Puna Plover, Andean Gull, Golden-spotted and Bare-eyed Ground-Doves, Rufous-banded and Slender-billed Miners, Plain-mantled Tit-Spinetail, Cinnamon-bellied Ground-Tyrant (300+ on the lakeside mudflats) and Black Siskin. 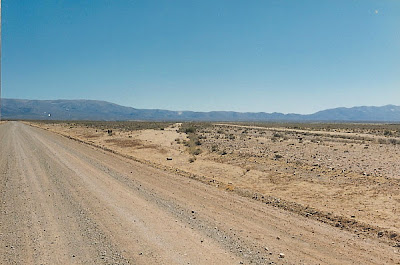 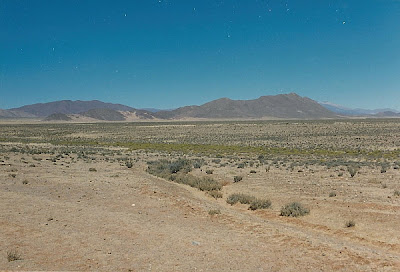 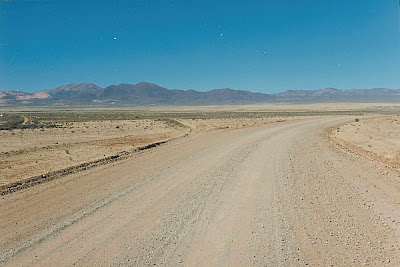 6th August.  We packed the tents up and spent the morning at Laguna Larga.   It was reached along a dry valley where we saw Ornate Tinamou and Band-tailed Sierra-Finch while we estimated that there were 100 Giant and 1000 Horned Coot on the lagoon.  We then drove to Humahuaca seeing Puna Rhea by the road almost immediately and finding a pair of Streak-fronted Thornbirds at a nest in trees in a walled field by a farm on the way back to Abra Pampa.  We continued on to Liberator General San Martin, arriving after dark and finding a reasonable (and warm) hotel there. 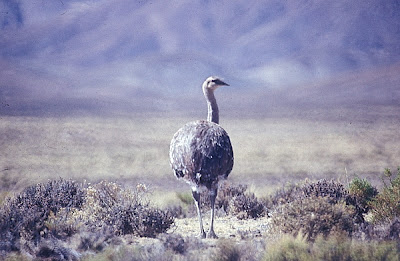 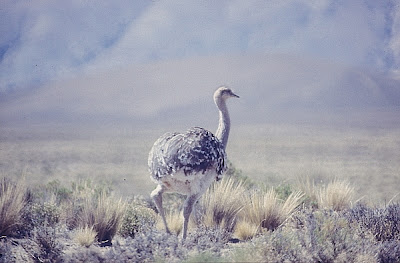 Posted by richard fairbank at 19:06