Saturday 15 October 2011.  The slim chance of seeing a Rufous-tailed Robin in Britain proved too irresistible for John King and I to pass up on.  I left Shoreham at 10pm and picked up John outside Burgess Hill.  We saw a Barn Owl on the way up and arrived on site at Warham Greens soon after 2am.  It was a cold night and clear sky which did not bode well - and made me wish I had a thicker blanket!  Although very disappointed that the robin had gone, it came as no great surprise.

At Warham Greens we saw 250 Pink-footed Geese flying E, 2 Marsh Harriers & 3 Lapland Buntings, plus a lot of old birding friends I’d not seen in years.  We eventually moved on to Titchwell where we saw a Bittern which flew across the main track, 640 Pink-footed Geese flew E, 900 Golden Plover including a white headed individual, 51 Ruff, 4 brilliant Bearded Tits and a Brambling.  Final stop was Holme where 500+ Pink-footed Geeses were feeding in a field and we along with 100 others were rewarded with good views of a Red-flanked Bluetail.  I saw the bluetail in the scope several times but when it showed the best I was too engrossed in watching it to take any photos while at other times it was a bit of a scrum.  It was my first bluetail in Britain for 19 years and made the trip worthwhile despite news of an Isabelline Wheatear in Sussex. 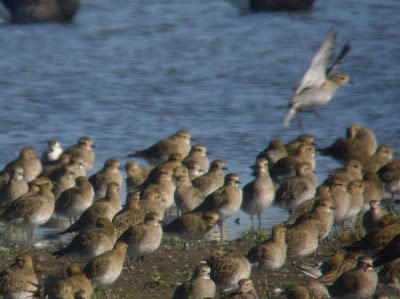 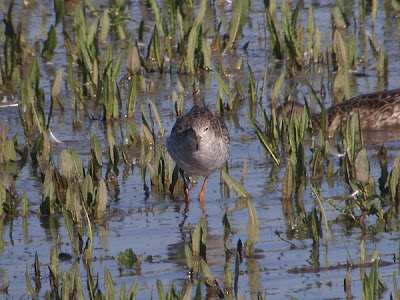 Posted by richard fairbank at 13:33