Friday 19th February 1982:  drive N, Doi Pui and Doi Suthep, Thailand
Steve drove through the night as far at Tak, arriving at 05:00 with us perilously low on petrol.  The garage there opened soon after 06:00 and we then continued to Chiang Mai for another fill up.  We arrived at Doi Pui by 10:00 and spent the rest of the day birding there and at nearby Doi Suthep.  Colin found a Yellow-faced Warbler but its all important head was partly obscured for me and then it dropped a long way down the hillside - bummer as I’d not seen one before.  We returned to Chiang Mai after dark where we bought food to take to Doi Inthanon.  On arrival at the entrance to Doi Inthanon we couldn’t bluff our way past the park guard so spent the night sleeping out by the Park HQ.

Saturday 20th February 1982:  Doi Inthanon, Thailand
We were up at 07:00 and drove straight up to the summit of Doi Inthanon, arriving an hour later.  It felt quite cold – a very nice change after the heat of the lowlands.  Birding was excellent around the summit all day.  We had superb views of the ‘twitched’ 50+ Dusky and 6 Red-throated Thrushes.  My only disappointment was my failure to see a Grey-sided Thrush in amongst the 50 or so Eye-broweds that were present around the summit 'marsh'.  Maybe I need glasses as I feel that I’m nowhere near as sharp as the others, who all saw it at one time or another.  We drove back down as far as km 31 after dark and crashed out there. 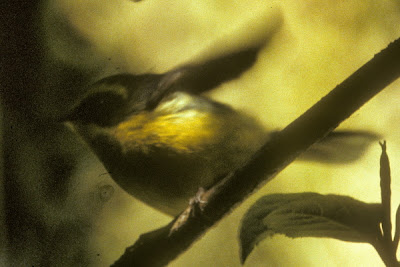 Sunday 21st February 1982:  Doi Inthanon, Thailand
All day birding around the second check post (km 37-38) was a little disappointing despite my seeing both Shortwings (one new).  Failed to find White-gorgetted Flycatcher in the ravines, recent collecting at this site probably not helping.  Crashed out at km 31 again.

Monday 22nd February 1982:  Doi Inthanon, Thailand
We drove up to the summit after a half-hearted look around km 31 first thing.  A Rufous-throated Hill Partridge around the summit 'marsh' was excellent but there were fewer thrushes in evidence and I again failed to find the Grey-sided amongst a similar number of Eye-broweds.   We had a few roadside stops on way down.  We wandered around behind the Meo village at km 31 and in dry woodland at km 13.  Steve and I missed Black-capped Woodpecker at the last site despite flushing one which then landed in front of Colin and Dave where it gave excellent views, flying off just as we arrived!  During three hours searching we only had two more ‘totally useless’ flight views.  Being a lot lower the area is probably much better early morning when it is cooler.  We left the national park and filled up with petrol in Chom Thong at 17:30 and drove to Chaing Mai where we found an excellent eating place.  We drove north to Taffon, passing Doi Chang Dao seemingly in flames.