Thursday 1st April 1982:  Pokhara to Kathmandu, Nepal
Our bus to left at 07:00 and arrived at 14:00, only half an hour longer than it was supposed to take.  I wasn’t by a window so found the journey pretty boring.  I collected two letters from Poste Restante and we checked back into Tourist Cottage (where room charge had increased to 11 rupees each).  We were in a front room which was noisy.  Remainder of day spent doing little and eating too many pies!

Friday 2nd April 1982:  Kathmandu, Nepal
Day resting, writing cards and letters and reading.  Excellent steak at KC’s.  Saw Craig Robson, Mick Turton, Mike Parr and Rod Martins.  From what they say it sounds as if Kosi could be good.  I visited the British Council Library to catch up on news but it closed early so only had half an hour there.


Saturday 3rd April 1982:  Gokana, Nepal
After breakfast at Aunt Jane’s six of us got a taxi to Gokana and spent several hours there (09:30-14:00).  I saw three new birds including an excellent Brown Wood Owl that Craig found.  We got a bus back to and Colin and I revisited the British Council Library but being a Saturday it was closed.  We ate in Jamaly’s, although I didn't think it was up to their usual standard.

Dave and I went to Godaveri by bus and got to Latipur soon after 07:00 but had to wait until 08:00 for the next stage.  We arrived at Godaveri at 08:35 and after buying a few biscuits we split up.  I headed up to look for Cutias, taking three hours climbing up the dirt road to Pulchowki, and a few short cuts, to reach the area but was unsuccessful in three hours of searching.  A superb White's Thrush on the way was excellent compensation.  I returned quite quickly and was back at Godaveri at 16:00 to find a bus was not due until 16:30.  A fight broke out on the bus as it arrived at Godaveri, although I’d no idea why and nobody seemed to be hurt.  I got on the bus but then two or three people on it started kicking and punching another.  The bus roared off with those on board, and the victim (wailing and bleeding heavily from mouth and nose) was deposited at the police station in the next village.  Waited there until 17:10 when all the locals got off the bus, presumably to wait for the next one.  I joined them but a truck came along two minutes later getting to Latipur at 17:35 and I was back in  by 18:10.


Monday 5th April 1982:  Godaveri, Nepal
I went back to Godaveri, on my own, taking 90 minutes to get there by buses.  One there I headed up to look for Cutias again, with no success.  A Collared Pigmy Owl with a dead Black-headed Sibia was a surprise given there is little size difference between the two (perhaps the owl was getting as annoyed with sibias as I was, every interesting sized bird seen while looking for Cutias seemed to be one).  I ticked off Ben King leading a tour when I got back down to the village, I thought he was a dude at first and made a fool of myself by explaining that bird flocks had dispersed as breeding season was starting before he introduced himself!  I then had tea with Dave’s friends in village before returning to .


Tuesday 6th April 1982:  Kathmandu, Nepal
A day spent in .  First I went to Foreign Post Office to send my large coat home by sea mail.  This cost 150 rupees, involved various hassles and took nearly two hours to complete the formalities (but it made it, although as my plans changed I was later to wish I'd kept it).  Then to Post Office where a letter from Nick was waiting saying he was coming out on 5th and would meet us in Jamaly’s that evening.  I’d just finished his letter and was wondering how we'd missed him the previous evening and where he was now when I saw him frantically waving to me across the Post Office.  Brilliant.  Our perhaps rather cruel regular airletters gripping him off and imploring him to come out and join us clearly had worked!  We went back to the lodge (the sewage smell there not improving) and to Stylist Pie Shop for a few pies, then I changed US$100 at a bank and dropped in at Royal Nepal Airlines Office for information on flights out of Lukla (our intention being to trek there through the eastern lowlands from Sunischare and Ilam).  It was too late to go to Immigration, although one can stay in Nepal for a 4th month for 160 rupees a week.  The British Council Library was open and Colin and I spent two hours there catching up on news.  Then to KC’s where we rejoined Nick and Dave for an excellent steak and on to Jamaly’s for more pies, seeing Craig et al there, and later Richard Grimmett.
Birds seen:  Cattle Egret 5, Little Swift 5, Common Myna 20, Indian House Crow 20.

Wednesday 7th April 1982:  Nagarjung and Gokana, Nepal
Up at 06:00 and Colin, Dave, Nick & I got a taxi out to Nagarjung arriving at 06:25.  We birded along the road for four hours seeing Spiny Babblers and Colin finding a male Siskin (the first record for ).  We walked back into stopping at KC’s, but it was too early for a steak.  We moved on to Jamaly’s,  back the lodge to pick up some photos and then on to Immigration to drop off passport for trekking permits.  We also got bus tickets to Kosi Barrage for 70 rupees each and I bought a new ‘hippie’ bag for 12 rupees.  Nick and I then returned to to get a bus to Gokana, arriving at 15:00.  I managed to show Nick the wood owl but we saw little else, leaving at dusk (18:00).  Bus back into and went to KC’s for a steak and Jamaly’s for lemon pie and vanilla ice cream - excellent!  Returned to lodge quite late.  My insides intermittently bad from Gokana onwards. 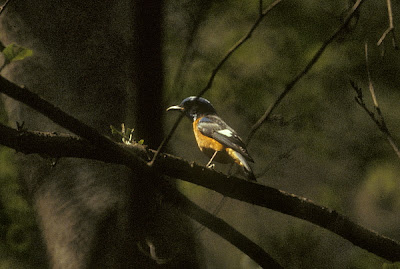 Thursday 8th April 1982:  Ravines at Godaveri, Nepal
Up at 05:45 feeling a little better.  I went to Godaveri with Nick.  The bus service was ultra-irregular, the 06:30 connecting with 07:05 which then arrived at 07:35.  Concentrated on ravines when feeling OK, otherwise very static.  We got bus back to at 12:30, arriving at 13:10.  Collected our trekking permits from Immigration, I cashed US$200 and posted last minute card home.  Returned to room to find locked out for an hour, then tidied up things and packed, with a short visit to Aunt Jane’s for a meal.

Posted by richard fairbank at 08:09