Friday 16th April 1982:  Kathmandu, Nepal
I was unexpectedly back in Kathmandu just a week after leaving.  After a quick abortive look for the ‘in favour’ Blue Mountain Lodge I returned to the trusty but now rather expensive Tourist Cottage.  I then had an easy relaxing day, although my stomach was still poor.  While feeling positive I bought trekking maps and guide books for Everest and Langtang and a couple of paperbacks to read.  My hope is to do the Everest Trek fairly quickly and get back to Kathmandu in time to meet up with Colin, Dave and Nick so we could all then go on the Langtang Trek.  As I have no idea how long I or they will be away this is perhaps rather optimistic.  I tried to find a pair of plimsolls, but no size 10s (Nepali feet seemingly stopping at size 9).  I bought a rubber sole for my shoes but it seemed too small.  It would have been more sensible to hand my shoes over to a cobbler but as they were the only pair I've got I'm perhaps foolishly concerned that they might be made worse.  No birds seen at all.

Saturday 17th April 1982:  Kathmandu, Nepal
Breakfast in Aunt Jane’s.  I wandered around a bit and then spent most of day copying up my earlier trip notes and tabulating them in a back-up 'exercise book'.  This was both insurance in case the original notebooks, of which I'm now on my second for the trip, are lost, but also to make them easier to write up in systematic order when I get home.

Sunday 18th April 1982:  Kathmandu, Nepal
Breakfast in Aunt Jane’s again.  I went to the Royal Nepal Airline Office and took the plunge by booking a seat on Tuesday's flight to Lukla, cost 721 rupees (it would have been half that for a Nepali).  The British Council Library is stocktaking until 5 May so I wasn’t able to catch up on any Falklands news.  It seems somewhat surreal to find that we are at war in the South Atlantic.  Muesli and curd at Jamaly’s then I slowly wandered back to the Tourist Cottage taking a few photos of street scenes on the way.  My shoe now seems OK so perhaps it is just as well that I didn't get any 'professional' help with it.   Later I went to the Post Office where I sent some cards home.  I also bought a heavy duty replacement shoulder bag for 20 rupees, my ‘hippie’ one no longer being robust enough.  A late afternoon visit to Stylist Pie Shop, then more trip note copying.  I didn’t bother with an evening meal as although feeling better my insides are still not right. 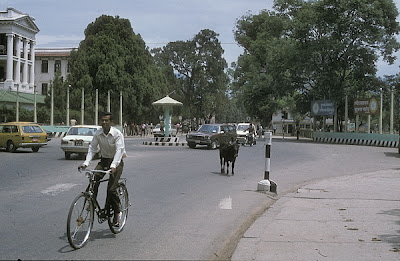 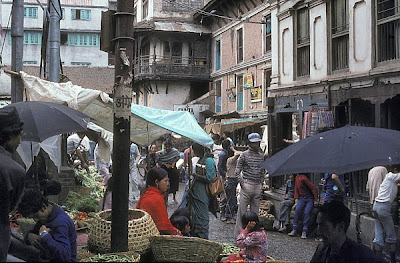 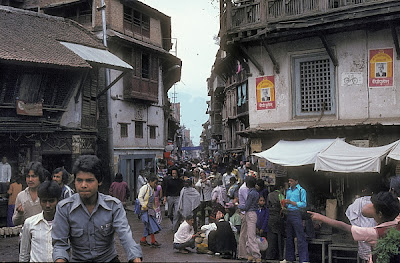 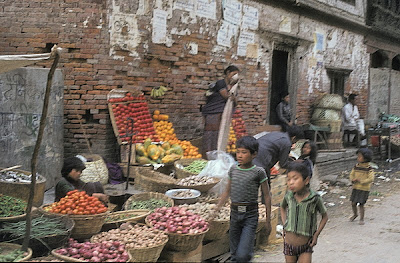 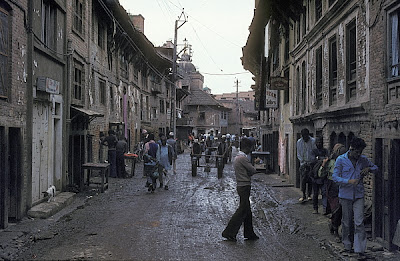 I was up early and on the bus to Gokana by 06:50.  I got to the entrance gate by 07:45 but was refused entry as told today it wasn't opening until 09:00.  I wasn’t prepared to spend the best hour of the morning hanging around so I walked up the road and found a bit of the wall I could climb in over.  I wandered around for two hours keeping a low profile until 'opening time'.   Just as well as I got a bit concerned at one stage on hearing machine gun fire, presumably some army exercise or them hunting deer?  I later picked up a spent shell case as a memento.   Unfortunately no sign of any fish owls – Craig had seen one on a previous visit - but it was quite good otherwise,  I was back in Kathmandu for breakfast at 11:00, read a bit then went to a bank and Stylist Pie Shop.  Packed my bags and later went to Aunt Jane’s where I met Richard and Dianna Scofield.  We soon moved on to the Golden Dragon and stayed there until 21:00.  Some local in the lodge singing until late was not appreciated!