Wednesday 30th June 1982:  Hemis, Ladakh,
The much heralded Hemis festival starts today.  It is a two day event and the only major festival to take place in the summer which makes it very popular with tourists as well as locals.  We didn't really know what to expect but it was easy to get caught up in the excitement.  I suppose we were fortunate that our visit to Ladakh coincided with it although I'd've prefered to be here at a time when one stood a better chance of seeing Tibetan Sandgrouse!  We had breakfast soon after 06:30 and got to bus station in time for the 07:30 bus to Hemis (perhaps unsurprisingly there seem to be no buses anywhere else today).  We arrived 09:30 after a ludicrous stop at an army checkpost on the way.  There were lots of people in the crowd, especially Ladakhi women in full dress, but we managed to get a reasonable vantage point for the first programme of dances.  The masks worn by the performers were very colourful but the dances did not appear to be very lively and tended to go on a bit.  We didn't understand anything which didn't help but it was worth seeing.  The second half followed after a two hour lunch break, probably very necessary as it was very hot.  We got a much better view from floor of the courtyard where the dancing took place, but it was uncomfortable and very dusty so we were glad when it was finally over.  At one stage the dancers got a bit annoyed with a couple of tourists encroaching onto the side of the courtyard and the dance deliberately careered into them.  Everybody else was content to remain in the roped off area, as were the miscreants after this rather amusing incident.  There was a quite large Indian Army presence at the festival, which left a slightly sour feeling.  We hurried down to get a bus back to Leh but none were in sight.  We ended up in back of a truck to Choglamsar - very dusty.  Once there we walked 1.5 kms towards Leh before hitching on a breakdown lorry, arriving back at 19:50, just in time for dinner! 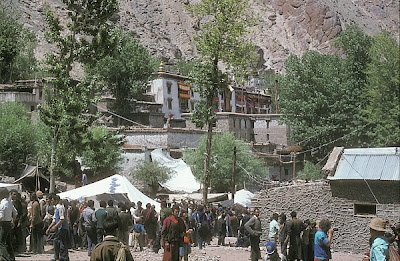 Thursday 1st July 1982:  Leh, Ladakh,
Dave was up early and back to Hemis.  Nick and I thought one visit was sufficient and had a more relaxed breakfast at 08:00.  I got my notes and diary up to date, wrote a few cards and walked down to the bus station where collected tickets for Kargil.  Visited post office and library to catch up on news and check a few things in Indian Handbook (states 'sight records [of Hume's Short-toed Lark] ... are worthless').  Back to the Tei-Sei then we walked around the back of the Royal Palace for 2 hours, our only birding of the day, returning at 17:00.  Dave returned later having enjoyed his second day at Hemis but despite having seen little around Leh I wasn’t disappointed not to have gone back.

Posted by richard fairbank at 20:01