Friday 2nd July 1982:  Leh to Kargil, Ladakh, India
We were up at 05:30 for bus departure at 06:00.  It left at 06:30 (clearly not a Ladakhi run bus!) and was held up at roadworks for an hour and a half at 10:00.  Then the ‘expected’ delays ensued, due to convoys and the army attempting to recover a truck that had crashed a week earlier.  The latter delayed us for a further hour before they gave up.  Finally we arrived in Kargil at 20:00.  We got hotel room and found out where to get the truck to Rangdom (which fortunately was going the next morning as per our information from Leh).  We went to bed at 21:30 but were disturbed at 22:30, 23:30 and 03:30 by noisy arrivals and departures.

Saturday 3rd July 1982:  Kargil to Zuildo, Ladakh, India
We were up at 04:15 and on the truck at 04:30.  It was very full to start with before any people got on.  We were perched precariously on its cargo with lots of other tourists (many French).  It departed at 05:05 for a very long and uncomfortable ride, at times quite frightening as we followed a poor track along the Sulu River valley and through some steep gorges.  We had a long, 2.5 hour, lunch stop in the middle of nowhere and finally arrived at Zuildo at 18:15 where we were very pleased to get off (the truck continuing on to Zanskar).  At Zuildo the river valley had opened out onto a rather flat, but in places boggy, plain – an area that looked to have great potential.  Zuildo was a small collection of mud huts, a small marquee type tent and a recently built one roomed wooden house with a concrete floor on which we were invited to sleep!  Rather cold and hard despite a karrimat.  Despite early fears some food was available.  We were told it was likely to be three days before the truck returned.


Sunday 4th July 1982:  Zuildo/Rangdom, Ladakh,
After leisurely breakfast (eggs!) we slowly walked to Rangdom Gompa across the 'swamp' making numerous detours firstly to avoid marshy areas and later, where more stony, wide rivers.  We ended up wading a couple of times but soon dried off in the warm sun.  It was very impressive scenery, especially the stony plain which looks more like I would imagine Tibet to be than the more fertile and much steeper Indus.  We had excellent views of breeding Lesser Sand Plovers and they and 3 ‘Tibetan’ Twite were the highlights.  We got back to Zuildo at 17:45 and had a reasonable meal of rice and chapatis. 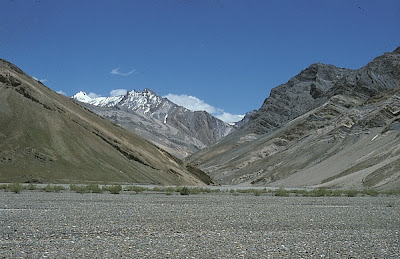 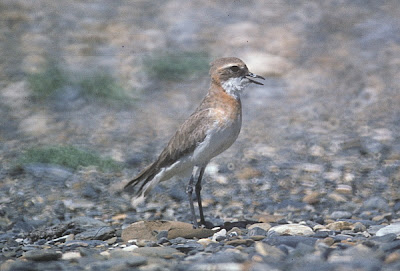 Monday 5th July 1982:  Zuildo Gorge, Ladakh,
We heard Himalayan Snowcock before breakfast again.  They must be on hill above us but no end of scanning managed to pick one up.  After breakfast we walked up the river valley/gorge to north of Zuildo with two icy river crossings on way up which we fortunately managed to avoid on return.  We saw 2 Wallcreepers and Sulphur-bellied Warblers were common!  Dave continued when Nick and I decided we’d gone far enough and soon after he’d left and disappeared around a corner we saw him running back in our direction, before continuing on again.  We discovered later that he’d seen a Brown Bear rather closer than he was happy with.  There was a cold wind blowing up valley and as a result we were back at Zuildo soon after 16:00 finding two pairs of Spanish Sparrows around the huts.  Time spent birding is getting shorter!


Tuesday 6th July 1982:  Zuildo to Parkachik, Ladakh,
We walked down river a short way before returning to Zuildo at 12:00 in the unlikely even that the truck was early.  It arrived at 15:00 and left at 16:00.  It had no cargo and many fewer passengers and seemed to go faster than on the way up, but many delays due to oncoming vehicles and regularly filling up its leaky radiator.  The driver nearly drove the truck off the track and down a very steep slope into the river 1000 ft below which caused a further delay while the track was mended/built up under the left front wheel which had been left in space.  The first Nick and I knew of this incident was when all the locals dived out the back of the truck, Dave who was on the cab roof, doing likewise via Nick's head!  We arrived at Parkachik somewhat relieved at 20:00 and slept on the porch of the rest house there.

Wednesday 7th July 1982:  Parkachik to Kargil, Ladakh,
We were up at 06:00, the truck left at 07:00 and arrived in Kargil at 15:00.  It was a very rough ride, at times we were getting thrown around everywhere, but it was less scary than previous truck rides.  We spent a couple of hours birding the treacherous scree slopes above Kargil seeing a few wheatears but little else of note and returned at 18:15 to an equally poor lodge.  Kargil is certainly one of the least impressive towns I've had the misfortune to stay in on this trip.

Posted by richard fairbank at 13:15