13 August 1983.  Morning at Sokoke with ringers seeing similar species including both East Coast and Forest Batis and Retz’s and  Chestnut-fronted Helmet Shrikes.  Frustratingly we heard Sokoke Pipit but it was a very thin call and we weren’t sure where it was coming from.  Most interesting bird caught was a very long lived Fisher’s Greenbul ringed in the very same net ride over 20 years previously.  Returned to Malindi with the ringers after saying goodbye to the very friendly villagers where we’d camped.
14 August 1983.  All day on Malindi Golf Course and at Sabaki.  The opposite side of the river from where we’d first been produced some different birds including 3-4000 Madagascar Pratincoles, African Skimmers and an identifiable White-cheeked Tern.  Sadly we probably overlooked Madagascar Squacco Heron which wasn’t covered very well in our literature, otherwise a most enjoyable day. 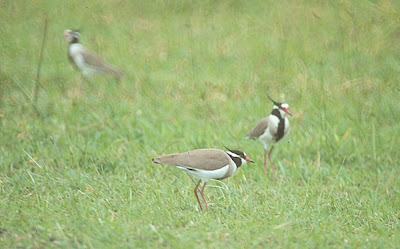 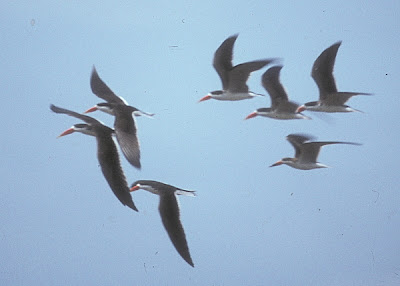 15 August 1983.  Morning in Sokoke afternoon at Mida Creek.  More ringing sessions although we wandered off looking unsuccessfully for Sokoke Pipit again.  Narina Trogon and Madagascar Bee-eater were some compensation.  A few waders at Mida Creek but the tide wasn’t ideall.

16 August 1983.  Final ringing session at Mida Creek was somewhat more successful with a better tide.  We then got a mutatu to Mombassa (very squashed as usual) and an overnight bus to Nairobi (more room but still not very comfortable).

17 August 1983.  Bus from Nairobi to Naro Moru, walked to Mt Kenya gate where camped.  Dusky Turtle Dove, Red-fronted Parrot and Robinchat were the best birds seen.  Glad most of the travelling is now behind us as getting a bit tired of buses and mutatus.

18 August 1983.  Walked up to Mt. Kenya Met Station where camped.  Birds included Narina Trogon, White-starred Bush Robin and Abyssinian Ground Thrush, Hill Babbler an d Crimsonwing.  All were excellent, as it was to be at a reasonable altitude and feel a slight chill in the evening.

19 August 1983.  We walked up onto alpine moorland to about 12,000 feet where we saw Scarlet-tufted Malachite Sunbirds.  It was hard going, perhaps the altitude having more of an effect than I was expecting.  We returned to the Met Station , packed up tent and continued down to Mt. Kenya gate seeing another Abyssinian Ground Thrush.
20 August 1983.  We walked slowly down towards Naro Moro, the last part in rain.  We saw Hartlaub’s Turaco, Moustached Green Tinkerbird. Kendrick’s Starling and Abyssinian Crimsonwing  Put up tent in rain at the edge of a small village near someone’s house who helpfully waited until it was up before coming out to tell us we couldn’t camp there.  It was a dome tent and so easily picked up and we walked further down the road with it.  Soon it stopped raining and we came to a clearing were a fire had been lit and abandoned (by shepherds?).  Things were looking up and we dried out and camped there, very nice.
21 August 1983.  We continued the 4 kms to Naro Moro seeing another White-starred Bush Robin on the way.  At Naro Moro we put the tent up at River Lodge and spent rest of day birding the grasslands nearby.  We saw Ostrich, Black-bellied and White-bellied Bustards, Black-winged Plover, Angola Swallow and Scarlet–chested Sunbird.
22 August 1983.  Morning around River Lodge seeing similar grassland birds and a White-browed Robinchat.  We then caught an afternoon bus back to Nairobi where returned to Mrs Roche’s.
23 August 1983.  All day in Nairboi, mainly in City Park and Museum Hill.  Brown-hooded Kingfisher was my last new bird while a Mountain Wagtail was as superb as always.

24 August 1983.  A morning departure with stops at Entebbe, where Crowned Crane was the best bird seen from the airport, and Cairo.  An somewhat more sedate trip than my first visit but no less enjoyable because of it.  I ‘only‘ saw 420 species, about 2/3rds of my previous total, but they included about 90 new birds and doing it on public transport it was considerably cheaper (£480 all in, most of which was the international flight).  Not bad considering that we got the trip off the ground in two weeks.