Introduction
In 1984 Nick Preston and I decided to go to Peru for a 5 week summer birding trip.  We obtained a detailed trip report from Nick Gardner and booked a return flight to Lima for late July.  Michael Grunwell, a friend of Nick’s from Bangor University whom I’d met on Scillies, got wind of our trip and came too although by then our flights were fully booked and he had to go out before we did and return after, at least that was the plan.  Meanwhile I contacted Barry Walker, who I’d known from the British twitching scene but who now lived in Cuzco, and arranged for us to bird the Central Highway with him.

This blog recounts that trip from selective memory and minimalist notebook entries - I was usually too wrecked to write much more than the daily species log.  The accompanying images were colour slides taken at the time and recently digitised.  ExIf data is therefore inconsistent, but I’m not trying to pass them off as having been taken in the UK:-).   Half the slides were on Agfa film which has badly degraded and in removing a strong red cast they are left looking fairly flat.  Some have obvious chemical defects and even those still in pristine condition are not a patch on the excellent images posted almost daily to surfbirds etc.

27 July 1984:  Welcome to Peru
Michael left the UK two days before us but his flight from Heathrow was delayed and he just missed his connection in Paris.  We got a message that he’d be arriving in Lima just after us and we spotted him in the arrivals hall soon after mid day.  Our journey, although pretty much on time, was hardly any easier with stops in Paris, Madrid, Caracas (change of planes) and Bogota.  Unfortunately Michael’s luggage had got there on schedule and he was trying to find it while we started the slow process of changing money (£250 = 0.5 million soles, I was tempted to change my last £250 to become an instant millionaire) and hiring a VW Beetle for our first two weeks or so.  Mike was still being given the run around and very generously suggested that Nick and I drive to find a nearby beach where we could spend an hour or so birding and still get back to pick him up and drive out of Lima before it got dark.  Mike even offered us his telescope as neither Nick nor I had brought one.  We agreed as although I’d been to a Spanish evening classes earlier in the year I felt that my very basic Spanish wasn’t likely to help.  Learning numbers took a setback given the exchange rate although I came to use mil (1000) a lot. 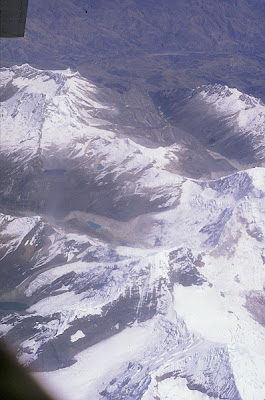 Nick and I drove out of the airport, north along the coast for a couple of miles and down a track past a few isolated huts to the beach.  I remember there being a few ‘stray’ dogs and more rubbish on the beach than birds although I did see 9 new birds including 2 rather smart Grey Gulls and about 30 distant Inca Terns.  It was also rather dull and surprisingly cold so after half an hour we decided to return to the airport to see how Mike was getting on, probably feeling a little guilty at having left him at all.

Half way back to the main road two men waving guns literally jumped out in front of us.  They were police and wanted to know what we were doing.  In my halting Spanish I explained we’d just arrived in Peru and were birdwatching, showing them the fieldguide.  They were, however, much more interested in Mike’s telescope (a big fat Optolyth) and insisted we go with them to the police station.  This happened to be next to the airport and we were questioned rather half-heartedly for several hours by whoever there seemed to be most bored at any particular time.  We did our best to provide minimal entertainment and were finally released by which time it was completely dark outside.  We quickly drove back to the airport terminal where Mike, thankfully with rucksack, was anxiously pacing around.  His initial anger that we’d left him for so long turned to jaw-dropping amazement when we told him we’d been arrested, and possible all because we’d borrowed his telescope.

We had a week before meeting Barry in Lima and set out to drive south down the coast to Paracas.  Unfortunately this involved driving through most of Lima and somewhere we went badly wrong and ended up heading inland instead.  At this stage, approaching 10pm at night (and goodness knows when UK time), it seemed easier to switch to plan B and visit a couple of sites in the mountains first.  We continued out of Lima and started to climb, now confident that we were on the right road, but at an unexpected fork we mistakenly turned right.  We almost immediately realised our error and were starting to reverse when the only vehicle we’d seen on the road came up and stopped behind us.  Soon we were surrounded by military police who wanted to know what we were doing driving down to a dam at that time of night.  After a thorough grilling and search of the car and our bags, during which we later discovered a few small items had gone missing, we were allowed to continue on our way.

By now we were all completely shattered and just wanted to find somewhere to crash out although we realised it would be a good idea to get well away from the dam first (not that we ever saw it).  Eventually we found a bit of a pull off by the road and I was so tired I couldn't be bothered putting up a tent and just climbed into my sleeping bag by the car.  I probably went out like a light but it seemed that no sooner had I done so than I was being prodded awake, not aggressively, by more police who insisted that we couldn't sleep where we were and had to move on.  This we reluctantly did when it became obvious that our arguments to stay were futile.  The police followed us to the next village where we turned down the first side street and, once they were out of sight, slept on the pavement.  Fortunately there were no noisy dogs around, or if there were I was too tired to be disturbed by them or anyone else.  Half of our first 8 hours been spent under arrest or being questioned by three sets of police – at this rate it would be a very long trip!

28-29 July 1984: Tentative venture into the mountains
At first light we continued driving up into the very arid mountains on a narrow dirt road heading towards Milloc.  Our first stop was for a flock of what turned out to be Raimondi’s Yellow Finches on the cliffs above us.  We piled out but our viewing of the birds was interrupted by a scrambling noise and panicked voice behind us.  Mike had stepped backwards off the bend we had stopped on and was seemingly hanging on by his fingertips above quite  a steep slope.  We helped him back up and continued on up the road but by mid day it became apparent that we were going to run out of petrol before we got close to Milloc and we reluctantly turned back.  Roadside birding was good but fuel consumption on the mountain road was dreadful.  We returned to the small town of Casta where we were dismayed to find there was no petrol station.  Eventually we tracked down what seemed to be the only other car in the village and bought a couple of gallons siphoned out of their tank, enough to get us back to the main road.  Clearly a change of plan was required and we decided to spend the night in Casta and head back down to the coast in the morning – we felt  we’d be less likely to get lost navigating through Lima in daylight!  This we did, birding along the way, and it was with some relief that we got back to the Central Highway, a decent road, and found a petrol station. 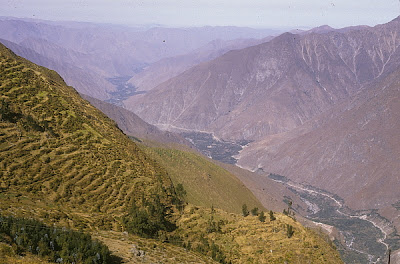 Posted by richard fairbank at 13:25