Introduction.  Nick Preston and I had visited Irian Jaya with Barry Stiddolph and Garry Edwards in 1993, see http://birdingneversleeps.blogspot.co.uk/1993_08_01_archive.html.  It had been a very tough but enjoyable trip that we arranged ourselves, mostly in country.  We saw a satisfying amount for a first trip although we were not successful in finding some of the more sought after species.  I visited Papua New Guinea in 2004 and 2006, the last time with Nick, but a few niggling gaps remained, not least Victoria Crowned Pigeon which is present in several collections where it taunted me (e.g. Bristol & Cheshire Zoos).  Jon Hornbuckle was also keen to return to Irian Jaya, his previous visit being in 1991 when he ran out of time before getting up to Lake Habbema.  The three of us put together a three-week itinerary that covered our main priorities and, confident of finding others, Jon attempted to get some quotes for the whole or individual sections of the trip.  This proved difficult and we had to abandon plans to go in summer 2012 when progress was almost non-existent.  With Nick Garner, Rodney Martins and Malcolm Oxlade keen to come too we tried again in 2013 and, after dismissing sorting everything out ourselves due to difficulties in contacting specific bird guides, we settled on using Royke Mananta a birder who had his own travel company -  Explore Islands of Indonesia (explore.isoindonesia@yahoo.com, http://www.exploreisoindonesia.com/).  Although based in Sulawesi he was able to confirm the guides we wanted and sort out all logistics on a preparatory visit to West Papua (as Irian Jaya is now called).  This blog is part one (out of four) recounting the trip from my perspective with many thanks to those mentioned above and not least Jon and Royke for allowing me to use some of their images.

5 August.  We arrived in Biak slightly late at 7am local time (two hours different from Jakarta and 8 from UK).  We collected our bags and were met outside the airport by Royke.  He had two 4WD vehicles waiting for us and we were driven a short way to the Intsia Beach Hotel where we checked in.  We ignored the temptation to lie down for the first time in what seemed like two days and headed to some rather degraded habitat in the east of the island, about 90 minutes drive away.  I had not much enjoyed Biak in 1993, not helped by being stuck there for an extra day when our plane out to Manokwari was cancelled.  All the accessible habitat seemed trashed in one way or another although it held some good birds including most of the endemics.  Things did not seem to have changed and although we went to a somewhat more remote area than previously it was still pretty hacked all the way there.  We birded for several hours and returned to the hotel for a late lunch where Royke landed a bombshell that the cost of our boat charter to Numfor and Manokwari had increased from IR 7 to 25M ($700 to $2,500), a real stitch up, and that he'd not got enough cash to pay for it.  Neither was there a plan B that did not seriously jeopardise the next section of the trip.  We checked out another boat that had offered to do the journey for IR 20M ($2,000) but it was much slower and did not have any seats while flights in the scheduled 12-seater plane left just 3 times a week and would disrupt our itinerary even if we could all get on them.  Somewhat concerned we went looking for Biak Scops Owl at dusk but failed to hear a call, let alone see one, which did not improve our mood.  Our first day produced Biak Coucal and Biak Monarch (an orange and black flycatcher that is perhaps the best of the endemics) which I’d missed before plus 5 Biak Paradise Kingfishers, Biak Red Lory, Biak Lorikeet, Golden Monarch and Biak White-eye.

6 August. We were up before dawn and driving back to the area of secondary forest that we’d birded in the previous day.  Most of us stayed out all day concentrating on another forest trail and the road while Jon and Rod went back for lunch and to visit an ATM (with mixed success).  Birds seen by me included Biak Gerygone (my only new bird), Biak Paradise Kingfisher, Biak Red Lory, Biak Lorikeet Biak Monarch, Biak Black Flycatcher, Golden Monarch and a superb Hooded Pitta.  Nick Gardner saw Biak Megapode which fortunately Nick Preston & I had seem previously - we'd returned to the road hoping for a fly-over Geelvink Pygmy Parrot which would have been new.  We stayed until after dark hoping again for Biak Scops Owl but although some heard it give one call it did not respond further.  On the boat front the captain had accepted IR 22M and rather unhappily we chipped in 2M ($200) each to help fund it, leaving us very short of currency (IR or $).

7 August.  We breakfasted, packed and walked down to the harbour 500m away where we loaded our gear onto the speedboat.  Powered by two 100 hp Yamaha outboards it took three and a half hours to cross to Numfor where we arrived at noon.  We'd definitely got the right boat even if we'd been taken to the cleaners by the captain (Royke had experienced smaller cost increases with the vehicles we'd chartered too, maybe ripping -off tourists was a Biak speciality?).  It was a fairly calm crossing but the boat bounced along at speed making it very difficult to see anything, not that there appeared to be much to see.  We arrived at low tide which meant a very careful approach through a reef and disembarking to wade then paddle the last 100m or so to the shore.  After 20 years of wanting to come I’d finally made it to Numfor.  A truck was waiting for us, the only vehicle we saw on the island, and we were soon at our ‘hotel‘ above the Kios Man Armo shop.  Lunch was soon dispatched and we piled back onto the truck and headed out of the village to some remnant forest patches by what appeared to be he islands main (only) road.  Here we got a response from Numfor Paradise Kingfisher and were soon watching it, a superb bird that had caught my eye as something I wanted to see when I first saw the New Guinea Field Guide over 20 years ago.  Perhaps the best of the Paradise Kingfishers, it fully lived up to my expectations and we ended up seeing 5.  A fruiting tree nearby produced 3 Geelvink Pygmy Parrots, something I’d been disappointed to miss on Biak.  Other good birds seen were 3 wintering Channel-billed Cuckoos, Claret-breasted Fruit-Doves, Biak Red Lorys and, as we were returning after dark, 2 Tawny Frogmouths over the road.  I’d not enjoyed Biak much but Numfor was great!

the light wasn't that good for digiscoping (slow shutter speeds or high ISO ratings).  Not sure why but video works OK under such circumstances (apart from inevitable camera shake) 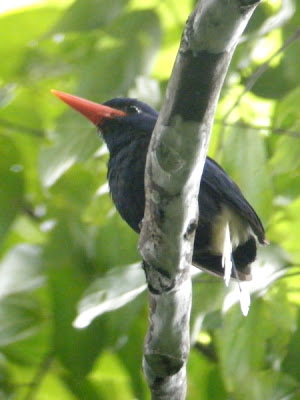 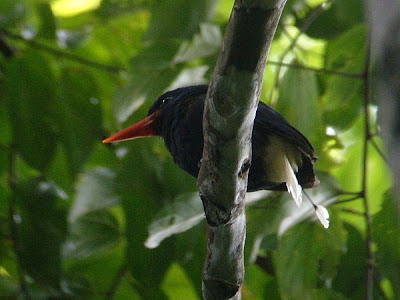 8 August.  We returned to the same forest patches the following morning seeing 3 more Numfor Paradise Kingfishers, the distinctive Numfor race of Island Leaf Warbler, 4 Geelvink Pygmy Parrots, Biak Red Lory, Channel-billed Cuckoo, Moustached Treeswift and Biak Black Flycatchers at a nest.  On the way back to collect our gear from the hotel we diverted to an area of mangroves on the coast where Torresian Imperial Pigeons roosted but, as expected given the time, all had departed.  Two Beach Kingfishers more than made up for missing them.  The tide was much further in and we boarded our speedboat with the shortest of wades.  Once beyond the reef it was flat our to Manokwari on the Vogelkop peninsular.  The journey took a little over two hours and proved better for birds, just, with poor views of a distant shearwater, presumably Wedge-tailed, 3 Brown Boobys and 8 frigatebirds.  The first stage of our trip had gone very smoothly with me seeing five new birds (plus one on Java) but one of the more challenging locations, the Arfaks, now awaited. 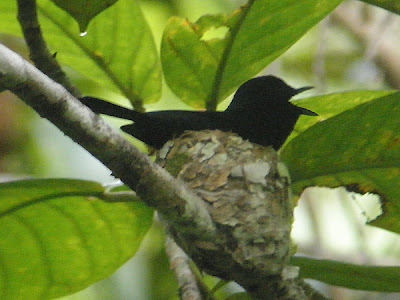 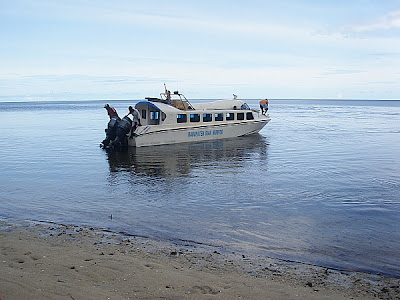 Posted by richard fairbank at 14:05