Introduction.  I was unsure what to do in 2004.  Nick Preston was going to Northern Peru which had limited appeal and Jon Hornbuckle alerted me to a private trip he had put together to Papua New Guinea in June.  My appetite for New Guinea had been put on hold following an arduous but generally successful trip to Irian Jaya in 1993 (see http://birdingneversleeps.blogspot.co.uk/1993_08_01_archive.html) but it was making its way up my wanted list particularly as I’d only seen female King, King of Saxony and 12-wired Birds of Paradise on that trip (and not seen Blue Bird at all).  Jon was happy for me to come along, I checked that I could get the time off work and booked a flight to Port Moresby.

5-6 June 2004.  On 5 June Dave and Martin Hunnybun and I flew to Singapore, arriving the following morning.  From there we flew to Cairns arriving early the next morning.

7 June 2004.  At Cairns we had a couple of hours birding around the airport, seeing Black-fronted Dotterel, Bush Thick-knee and Australian Reed Warbler, before flying on to Port Moresby.  Here, feeling very wrecked, we met Mike Watson and Jon and learned that the other two members of the trip, Janos Olah and Tamas Zalai had been prevented from boarding their flight in Sydney by an officious Quantas agent who took exception to them not having a visa – something the PNG embassy in Budapest had confirmed that they did not need in advance as it was possible to obtain one on arrival.

A quick turnaround at Port Moresby airport saw our depleted group transferring to an internal flight to Mount Hagen.  Here a pickup was waiting to take us to up to Kumil Lodge.  On the way we made a brief stop as the light was fading at a site for Blue Bird of Paradise which was unsuccessful, a male Papuan Harrier was very nice but hardly adequate compensation.  Kumil Lodge was basic and a bit intimidating – surrounded by tall, spike-topped wooden fences - but very welcoming and had excellent food.  It was cold at night, perhaps not surprising given the altitude, and I was suffering from jet-lag having been travelling fairly solidly for two days.  It was not too hard to get to sleep in the evening but I was then wide-awake by 2 am.
8 June 2004.  We were up at dawn seeing lots of birds by the lodge.  We reluctantly returned for meals which we had overlooking a bird table stocked with cut up fruits.  Some birds came in but not the hoped for Crested Bird of Paradise although perhaps we should have persevered.  A walk down the road to a nearby area of forest was also disappointing and we concentrated the rest of our efforts in the vicinity of the lodge.  Birds seen included Chestnut Forest-Rail, Goldie’s and dark morph Papuan Lorikeets, Ribbon-tailed Astrapia, Brown Sicklebill, Blue-capped Ifrita (most pleasing after having narrowly missed it in Irian Jaya), Crested Berrypecker, White-winged Robin and Mountain Firetail.  At dusk we saw Mountain Nightjar but only heard Mountain Owlet-Nightjar. 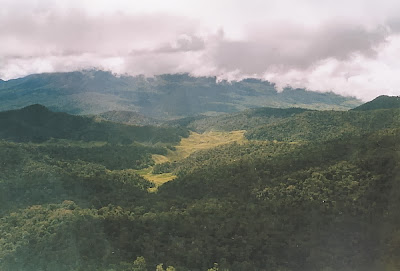 9 June 2004.  We were up well before dawn as the Mountain Owlet-Nightjar was calling again – still being heavily jet-lagged that was easier than it normally would have been!  The MON was finally tracked down by Martin who found it perching very low in some open trees where it gave excellent views by spot-light.  We left Kumil Lodge at 06:30 to give us time to look again for Blue Bird of Paradise on the way back to Mount Hagen where we were due to fly to Tari at 09:20.  We had superb views of a male Blue BoP as well as Superb BoP and rather more briefly a Yellow-breasted Bowerbird.  Our flight was delayed till 11:55 allowing us to visit some nearby coffee plantations where we saw Black-headed Whistler and another Yellow-breasted Bowerbird.  Tari Airport was a runway with a metal hut, some scales and a trolley.  It was surrounded by a tall fence and it appeared if the whole town had come to see who was arriving, they seemed to be two or three deep in places, all staring at us with rather surly expressions.  This was rather intimidating and we were pleased to be met by Stephen Warili and taken to his new Warili Lodge in an old minibus which he’d hired/borrowed to take us around for the next five days.  The lodge was about an hour’s drive from the airport up one of the valley sides towards Tari Gap and just short of the world famous, but very expensive, Ambua Lodge.  Driving out of Tari were many smallholdings with ‘gardens’ surrounded by earth ramparts topped by tall spiked wooden fences with very narrow entrances – to prevent unwelcome visitors with murderous intent from gaining access.  Such dangers didn’t necessarily come from another village as we past the grave of a man we were told had been killed by his wife cutting off his privates.  These were not people to mess with!  Warili Lodge was being added to when we arrived but Stephen had enough rooms for us.  The communal kitchen/living area was very cosy and the food excellent.  After a late lunch we headed up with Benson, one of Tari’s top guides, to Benson’s Trail where an excellent afternoon produced King of Saxon, Crested and Loria’s Birds of Paradise, Ribbon-tailed Astrapia, Brown Sicklebill, Black Sitella, Blue-capped Ifrita and White-breasted Fruit-Dove on a nest.  Male King of Saxony was superb (I’d only seen females in Irian Jaya) but I messed up getting a prolonged view of the male Crested BoP by being slow to respond to Mikey’s whistle.  A female nearby was not so shy. 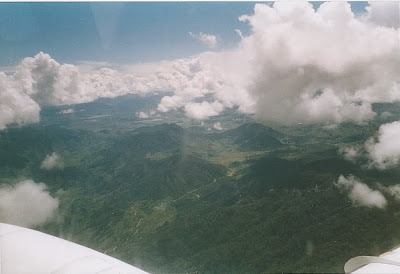 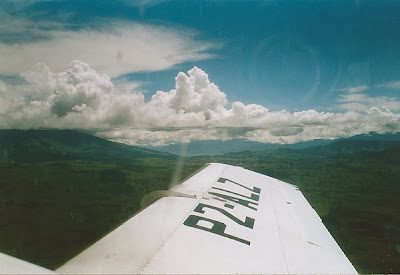 10 June 2004.  All day at Tari.  After an early breakfast Benson took us back on his trail where a Lesser Ground Robin finally gave itself up.  It initially caused me great frustration as several times I was just too late to get onto it as it circled us in response to tape playback.  Needing glasses while forest birding was not ideal.  We also saw an amazing male King of Saxony BoP, more Ribbon-tailed Astrapoias  and Brown Sicklebills, Brehm’s Tiger-Parrot, Papuan Treecreeper (another species I’d missed in Irian Jaya), Tit Berrypecker and Black-breasted Boatbill.  We returned to Warili Lodge for lunch and in the afternoon in a ‘garden’ near the lodge Joseph (Ambua’s top guide) showed us a rather distant Short-tailed Paradigala on a nest.  We searched for but failed to find Lesser Melampitta but at dusk in a quarry near the Bailey Bridge had excellent torchlight views of a stunning Feline Owlet-Nightjar.  Another superb day. 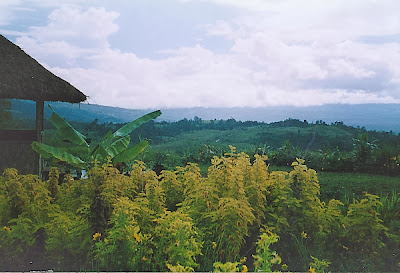 11 June 2004.  We headed up to Tari gap where we flushed a Brown Quail and saw Australian Pipit but the area was generally disappointing.  The way back down was much better and we saw Stephanie’s and Ribbon-tailed Astrapia, Brown Sicklebill and another superb male King of Saxony BoP.  Back at Warili Lodge Janos and Tamas had arrived from Kumil Lodge, following two unscheduled days in Australia.  They were obviously keen to try Benson’s Trail but Joseph appeared and offered to take the rest of us around Ambua.  That appeared to be too good an opportunity for Dave, Martin and I to refuse but it proved to be a big mistake.  We saw virtually nothing while Benson’s Trail produced New Guinea Harpy Eagle, perched briefly before flying away, Wattled Ploughbill and Lesser Melampitta with excellent views of the Short-tailed Paradigala in the ‘garden’.  Janos and Tamas deserved their good fortune after their problems with Australian bureaucracy but I was very gripped. 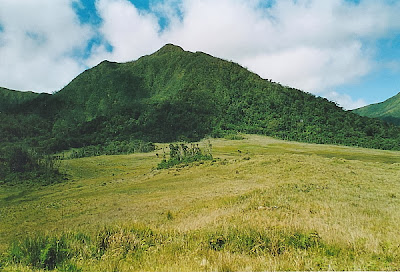 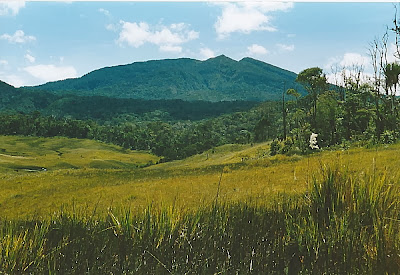 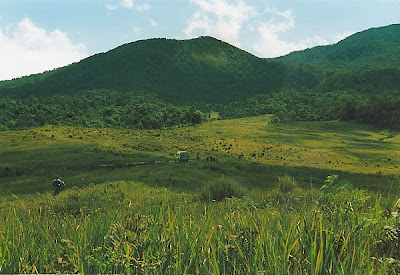 12 June 2004.  Benson took us all down to some of the gardens below the lodge and led us through a warren of paths, tall wooden fences and narrow gates to remnant forest patches and scrubby hedges.  In a forested gulley we found a male Blue BoP with a pair of Superb BoPs nearby.  We tracked down a calling Mountain Kingfisher to a large fairly open isolated tree but even then it took some finding.  Also in the area we saw Papuan king Parrot , Great Cuckoo-Dove and Stout-billed Cuckoo-Shrike.  After lunch we returned to the higher trails where I saw a superb Spotted Jewel-Babbler, a Lesser Melampitta, Meyer’s Goshawk, Brehm’s Tiger-Parrot, Mountain Mouse Warbler, Peltops and Firetail, both Astrapias (including a fully ribbon-tailed male), Brown Sicklebill and more King of Saxony BoPs but was disappointed not to get onto a Northern Logrunner that most of the others saw.  Despite missing the logrunner it was another excellent day.  An excursion after dark looking for a calling Papuan Boobook was unsuccessful, not helped by my torch and recording not being very powerful. 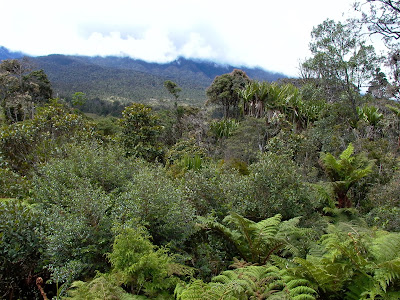 13 June 2004.  We were up before dawn and back down to the gardens looking for Lawes’s Parotia and Black Sicklebill.  The weather was unsettled with rain and low cloud, the latter scuppering our chances of seeing a calling Black Sicklebill.  Other BoPs were more obliging and I saw a pair of Blues, a male Superb and a female Lawes’s Parotia.  After breakfast we headed up to the higher trails where others saw but I only heard Forbes’ Forest Rail.  I decided to stay out while the others returned for lunch.  Travelling up and down the road was quite slow and lunch seemed to take a big chunk out of the day.  The downside was that the others were going to try for the Black Sicklebill after lunch but as I’d seen them in Irian Jaya I thought it was best to concentrate higher up where the logrunner, forest rail, Wattled Ploughbill and New Guinea Harpy Eagle had been seen by other members of our group.  and see them on the road when they returned later.  I didn’t see any of my targets while the others visited another area below the lodge where there was a Macgregor’s Bowerbird bower, with elusive owner, and good views were had of Black Sicklebill and a calling male Parotia.  Probably the wrong decision again but I took compensation from getting better views of 2 Lesser Melampittas, a Lesser Ground Robin and 6 King of Saxony BoPs.

14 June 2004.  Another solo night jaunt for Papuan Bookbook proved unsuccessful but a male King of Saxony BoP and a Lesser Ground Robin provided a fitting send off from Warili Lodge.  A stop on the way down to the airport failed to produce the roosting Sooty Owl we’d hoped for although 3 Papuan Frogmouths in trees above the road some compensation.  At Tari Airport we saw a Forest Kingfisher on the perimeter fence and an Australian Pratincole on the runway.  We were weighed as was our luggage on a set of scales by the apron where we waited for our flight to Tabubil.  It arrived on time.

Posted by richard fairbank at 20:13