14 June 2004 continued.  Our flight from Tari to Tabubil left on time at 10.30.  We stopped briefly at Kiunga and continued on to Tabubil.  Here we encountered thick cloud and after attempting to land three times had to return to Kiunga to refuel.  After a short wait, which produced Australian Hobby and Palm Cockatoo, and a more promising forecast from Tabubil we set off again and the pilot spotted a hole in the clouds on our second circuit of the valley and dived in to land safely.  Just as well as he told us it was his last attempt as his schedule would not allow any further delay.  After some confusion at Cloudlands Hotel, where we’d incorrectly been allocated rooms with double beds, I wandered around the hotel grounds seeing very little (any native trees having been replaced by Eucalypts) while the others had a late buffet lunch.  We spent the rest of the day at Dablin Creek where a flowering bush provided our best sightings - Josephine’s Lorikeets, Spotted and Dwarf Honeyeaters and Red-throated and Papuan Black Myzomela, all of which were new for me – some on light rain.
15 June 2004.  We returned to Dablin Creek but the weather was worse with, at times, some heavy rain.  We walked up the track to the maintenance steps and climbed them to the top where artificial lights had attracted many colourful moths.  Best birds were Superb Fruit-Dove, Orange-breasted Fig-Parrot, Red-breasted Pygmy-Parrot, Mountain Peltops, Torrent Flycatcher, White-rumped Robin, Carola’s Parotia and Magnificent Bird-of-Paradise.  Unfortunately only females of the last two.  We also heard Chestnut-backed Jewel Babbler, something I was very keen to see, so I decided to stay at Dablin Creek while the others went back for lunch and then on to Ok Manga to look for Torrent Lark and Salvadori’s Teal (both of which I’d seen in Irian Jaya).  The rain just got heavier although I did flush a Bronze Ground-Dove off the trail.  The others returned to Dablin late afternoon although I’d met the Birdquest group by then and they offered to give me a lift back to the aptly named Cloudlands. 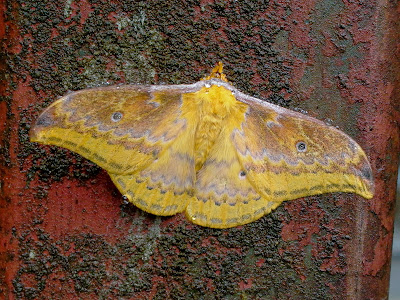 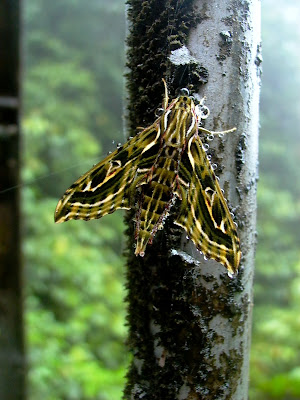 16 June 2004.  Back to Dablin Creek for a final morning where frustratingly I only heard Chestnut-backed Jewel-Babbler again.  Star attraction was an amazing male Carola’s Parotia seen between rain showers.  It was picked up at some range by Tamas with Janos translating the initial Hungarian directions.  Fortunately the slight delay wasn’t critical and we had excellent ‘scope views of it and six females.  We returned to Cloudlands where I had another unproductive walk around the grounds while the others lunched.  The Ok Ma road was the afternoon’s destination but the bridge over the river at Tabubil was closed to vehicles due to flood damage.  Samuel eventually located & chartered a clapped-out van on the other side and by mid-afternoon we reached the forest along the Ok Ma road.  Here we had excellent views of a pair of Magnificent Riflebirds (what a brilliant call they have), Palm Cockatoo and Sooty Thicket-Fantail.  At dusk a Shovel-billed Kingfisher calling by the road frustrated us by staying in thick cover.  Spotlighting a Papuan Boobook was some consolation.  Back at Cloudlands, somewhat late, we agreed with Birdquest that they could have the van to get them to Ok Ma before dawn and would then send it back for us.  Not ideal but it seemed fair. 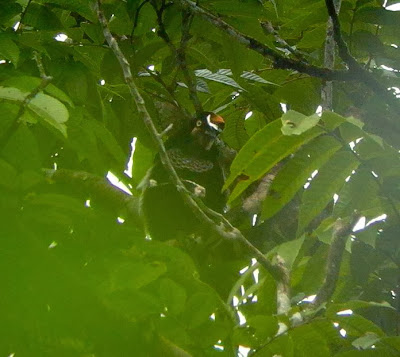 17June 2004.  After a rather more leisurely breakfast we were waiting at the bridge for the van’s return.  It failed to show but Birdquest eventually did.  The van had run out of fuel leaving them with an hour’s walk back to the bridge.  Understandably they were not amused.  Neither were we but we continued through the village and did manage to find an alternative vehicle to take us.  If only the weather had recognised our efforts, but it did not with light and heavy rain alternating for most of the day and conditions very wet underfoot.  When it was too wet to bird we resorted to playing word games with Western Palearctic birds, something the Tamas or Janos usually won despite their language disadvantage!  A somewhat frustrating day that was better on paper than it actually was.  I saw female Magnificent Riflebird and female Magnificent and a pair of Greater Birds of Paradise.  Very nice, as were Superb Fruit-Dove, Vulturine Parrots and male Golden Cuckoo-Shrikes.  I also saw Chestnut-backed Jewel-Babbler, but only in flight, had a very brief view of a Greater Melampitta and flight views of a flock of ten Blue-collared Parrots as they flew over high calling like squeaky gates.  At dusk the Shovel-billed Kingfisher called again but this time it flew over when the light had all but gone and even its shape wasn’t discernible to me.
18 June 2004.  By prior arrangement we were met by the bridge an hour before dawn by yesterday’s charter vehicle.  It got us to the forest on the Ok Ma road for first light where the Shovel-billed Kingfisher finally gave itself up, flying across the road twice and then perching in view below the canopy for a couple of minutes.  It was a new bird for us all, even Jon for whom it was the highlight of the trip.  I was quite impressed too.  Heavy rain then hampered any further birding although I saw a male Magnificent Riflebird and female Great Bird of Paradise.  Again I only heard Chestnut-backed Jewel-Babbler, very disappointing, and had a poor flight view of Greater Melampitta,  We returned to Cloudlands and left in a chartered minibus for Kiunga at 13:00.  We stopped at some gravel workings south of Kabubil where we saw the endemic form of Little Ringed Plover but then it was a rather tedious journey through generally trashed habitat and small villages all the way to some remnant forest at Km 17.   Here we spent two hours until dusk and I saw Beautiful, Pink-spotted and Orange-bellied Fruit-Doves, Lowland Peltops, two Greater Birds of Paradise (it was the wrong time of day to visit a nearby lek) and displaying Trumpet Manucode.  As the light was going we heard two close Hook-billed Kingfishers but frustratingly failed to locate either.  Kiunga Guest House was fairly basic but more than adequate.

19 June 2004.  We had hoped to visit the Boystown Road but we were told by Samuel that it was undriveable due to recent heavy rain and muddy conditions.  We tried the Gre Dringas Road at Km 14 instead.  There was no sign of the hoped for Flame Bowerbird but we did see Frilled and Golden Monarchs.  I saw a New Guinea Megapode flying across the road on the edge of one village on the way back.  Returning to Km 17 after lunch, we visited the Greater Bird of Paradise lek seeing 15 birds (10 males) in full flow.  One of the males had orange-red plumes suggesting it was a hybrid Greater x Raggiana.  Footage used for Attenborough in Paradise had been filmed here, although with the benefit of an elevated hide.  We also saw a wintering Buff-breasted Paradise Kingfisher, perhaps my most notable find on the trip, Lesser Black Coucal and Emperor Fairy-Wren but could not locate another calling Hook-billed Kingfisher.

Posted by richard fairbank at 20:07