This blog is the third of four recounting a three week trip to the Philippines at Easter 2008 with Andy Bunting, Nick Preston, Gerry Price and Graham Thurlow and expertly put together and guided by Jon Hornbuckle.  Nick and I had visited some parts of the Philippines 12 years earlier with David and John Cooper and Barry Stidolph (see http://birdingneversleeps.blogspot.co.uk/1996_04_01_archive.html). Nick was only able to be away for the two week school holiday and unfortunately he had to leave before the end of our visit to PICOP.  It was a very enjoyable trip with a great group and I would like to thank everyone, but especially Jon for arranging such a successful trip and allowing me to use his photographs (I didn’t take a camera).


17 April.  We assembled for breakfast at 04:30, our arrival the in early hours necessitating a slight lie in, and left with Zardo for PICOP at 05:00.   We were clearly too late for owls and headed for the quarry area stopping on the way in rather hacked habitat for Black-and-white Triller, Philippine Leafbird and Naked-faced Spiderhunter.  Zardo took us to a clump of bamboo by the road inside which a male Little Slaty Flycatcher performed well.  We spent the rest of the morning in remnant forest patches looking for flocks with limited success.  We had excellent views of a superb Azure-breasted Pitta (also known as Steere’s and my fourth pitta species of the trip – very satisfying), Amethyst Dove, Rusty-crowned Babbler, Rufous-tailed Jungle-Flycatcher and a smart Black-headed Tailorbird but I failed to get onto a Short-crested Monarch as it moved through the canopy.  A heavy shower while in a clearing had us rushing back to the Jeepney but it was fortunately short-lived and we drove on to the Silvery Kingfisher site.  There was no sign of the bird and the area for it, a small pool below a tangle of branches beside the road in a cleared area was quite discouraging.  We hung around for a while and suddenly it appeared giving excellent good views.  Brilliant.  We continued to an area of open forest and saw a pair of Writhed Hornbills, Black-faced Coucal, Stripe-sided Rhabdornis and Coleto.  We left PICOP and drove to a deserted Bislig airfield where we spent the last two hours of daylight.  We saw a female Lesser Frigatebird, 3 Black, 2 Cinnamon and a Yellow Bittern, 6 Philippine Duck, 6 Watercock, White-browed Crake, 6 Oriental Pratincole and at least 2 Painted Snipe.  Our wait to dusk was rewarded with a distant Grass Owl as the light was fading. 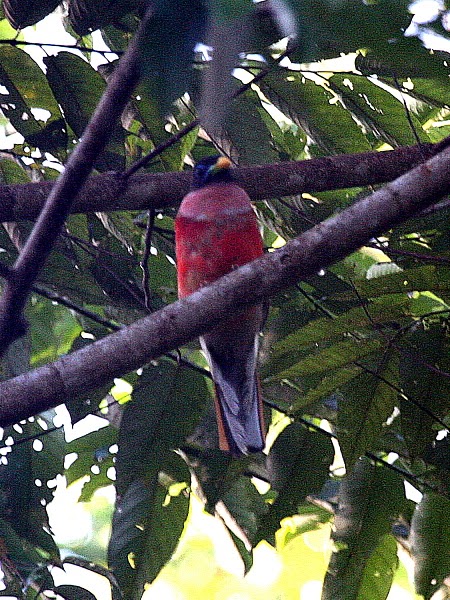 18 April.  We left the Paper Country Inn at 04:00 taking with us an egg and bacon sandwich breakfast but still arrived at the main owl site too late, at 05:15.  Only Chocolate Boobook was calling and we failed to locate it.  We drove on to forest road 42 and started walking.  A calling Rufous-lored Kingfisher looked like it was going the same way but Nick and I hung back.  We had missed the species on Bohol on our previous trip - David and John Cooper had seen one but we’d only managed a shape flying over the canopy and calling at us from an equally invisible location.  Also known as Winchell’s, I was reminded of it every time a weather forecaster mentioned ‘wind chill’ and we were determined not to miss it again.  Fortunately we tracked it down to a more open area where we obtained good views.  We caught up with the others and further along the track saw another brilliant Azure-breasted Pitta, 2 excellent Streaked Ground Warblers, a superb female Wattled Broadbill and a stunning Philippine Dwarf-Kingfisher carrying food which appeared to be nesting in a bank 4m above the ground.  The broadbill and kingfisher were both birds that I was hoping to see but I knew they were easy to miss and so by no means guaranteed whcihmad eour early success even better.  Nick and I had seen Wattled Broadbills on Bohol on our previous trip but some authorities considered this one to be a different species, Mindanao Wattled Broadbill rather than Visayan, partly due to its white underparts.  The kingfisher was just stunning.  We also saw Rufous Paradise-Flycatcher and Pygmy Babbler and I caught up with a female Short-crested Monarch but we failed to find the hoped for Celestial Monarch.  Soon the cicadas were at full volume, greatly reducing our chances of finding the monarch according to Zardo so we slowly wandered back.  It had been a superb morning.  We spent the afternoon in an open area, seeing Philippine Needletail, Blue-crowned Racquet-tail, Black-bibbed Cuckoo-shrike  and Philippine Oriole.  We stayed to try for Philippine Frogmouth and soon after dusk one started calling and gave brilliant views.  It was mid-evening by the time we returned to the Paper Country Inn rather exhausted.  Nick discovered that his spare bins had been stolen from his bag in our room.  The management refused to accept any responsibility and an unwanted trip to the police-station to report it ensued.  We later heard that there were reports of a few other less valuable items "disappearing" in previous months. 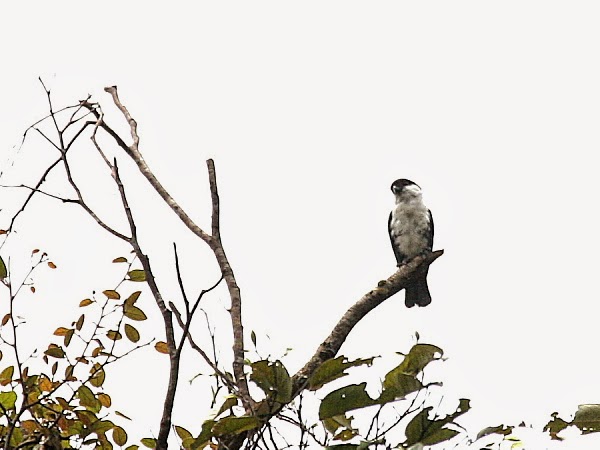 19 April.  As we’d been too late for owls the previous morning we left half an hour earlier at 03:30 but it was damp following heavy overnight rain and only Giant Scops was responsive, briefly, and frustratingly we could not see it.  Nick only had the morning as his two weeks were running out and so we concentrated on the Quarry trail area seeing a pair of Wattled Broadbills nest-building some 10m up in fairly open forest, Azure-breasted and Red-bellied Pittas, 4 Mindanao Tarictic Hornbills and another Rufous-lored Kingfisher.  After Nick had departed we birded a more open area and were surprised to see a Gray’s Grasshopper Warbler in a patch of scrub before two flew out calling loudly.  Soon the rain started and we returned to the Paper Country Inn for brunch, stopping to look at a few waders on the shore on our return although the tide was quite high.  It stopped raining mid/late-afternoon and we returned to Bislig airport.  Some stints and plovers were roosting on the tarmac and Jon noticed that the Kentish Plovers appeared to prefer standing on the white line running along the middle of the runway, while the Red-necked Stints were mostly on the grey tarmac, presumably they felt better camouflaged that way.  I was more concerned looking for Java Sparrows which had been seen in the area, but I had no success.  Bird activity wasn’t quite as good as on our previous visit although I did see Blue-breasted Quail this time.  We also had a somewhat closer view of the Grass Owl at dusk but could have positioned ourselves better, at the far end of the runway, if we'd anticipated it following a similar flight path.  Nick had left me his old umbrella so I ditched mine in the hotel.  It was to prove a mistake. 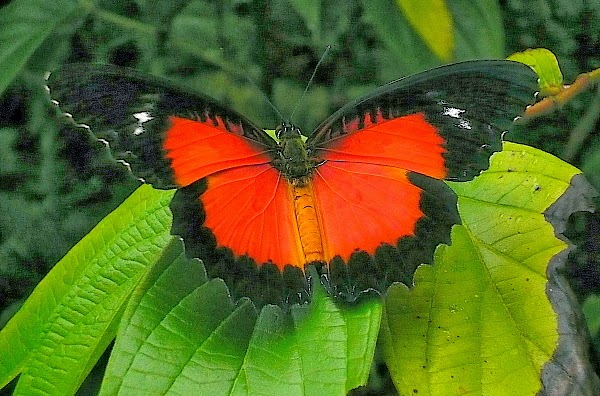 20 April.  Andy and I were keen to have a final attempt at owls necessitating another early start that the others opted out of.  We left our packed bags for them to bring as we would not be returning to the hotel.  Our only owl activity was a Philippine Scops calling from a thick tree.  Andy saw it fly out while I was looking the wrong way.  Things got worse for me as he then saw a male Short-crested Monarch that I didn’t get onto either.  We had hoped to re-visit Road 42 to look for Celestial Monarch, something we’d stipulated wanting to do from the outset, but the driver claimed not to have enough fuel to go that far.  Thwarted again.  We met the others at the PICOP entrance at 09:00, transferred into their Jeepney and drove to Davao; although I soon realised I’d left Nick’s old umbrella in the original Jeepney.  The shortest period I’ve had an umbrella so far!  It just wasn’t my day.
Posted by richard fairbank at 14:35