This blog is the shortest of those reporting on a three week trip to the Philippines at Easter 2008 with Andy Bunting, Nick Preston, Gerry Price and Graham Thurlow and expertly put together and guided by Jon Hornbuckle.  Nick and I had visited some parts of the Philippines, but not Palawan, 12 years earlier with David and John Cooper and Barry Stidolph (see http://birdingneversleeps.blogspot.co.uk/1996_04_01_archive.html). It was a very enjoyable trip with a great group and I would like to thank everyone, but especially Jon for arranging such a successful trip and allowing me to use his photographs (I didn’t take a camera).

13 April.  After a short night, we were at the airport for the 08:00 flight to Palawan.  On arrival at Puerto Princesa we were met by a van Jon had chartered for our stay.  While getting ourselves sorted I noticed one of the other passengers on our flight unpack a collapsible bicycle from his luggage, assemble it and cycle off which his remaining things on his back.  Impressive.  We set of towards Sabang but soon stopped at Garceliano Beach to look for Chinese Egrets.  A high tide did not help but we soon found 4 roosting on offshore fishing traps.  An nice looking new restaurant by the main road was too tempting for some and we stopped for an early lunch before continuing.  We then had productive stops for Blue-headed Racquet-tail, Yellow-throated Leafbird, Blue Paradise-Flycatcher and the stunning Palawan Flowerpecker.  As we approached Sabang it was clear that there had been  a lot of rain recently and the track to Taraw Lodge, our guest-house, was flooded but fortunately the van just made it.  We had a look around the lodge before returning to the road to visit the Frontier Resort to collect our St Paul’s NP permits and then on to visit the Lion’s Cave track at dusk to look for Palawan Scops Owl and Frogmouth.  For this it turned out we were rather ill prepared having left over half of our torches in the lodge, including mine - how dumb was that!  Both birds called very close to the track but from generally thick cover and we failed to find them.  Whether more torches would have helped I don’t know but I felt we’d not really given ourselves the best chance and was kicking myself for not being fully kitted up.  At least we would have two more chances and it was not a mistake I planned to make again .

14 April.  After a pre-dawn breakfast we took a banca along the coast to St Paul’s as it was getting light. The famous habituated Palawan Peacock-Pheasant, and one of my main target birds, performed well.  It was a stunning bird and did not disappointed.  White-vented Shamas were equally obliging unlike a Tabon Scrubfowl which scuttled off before I had chance to raise my binoculars.  All too soon it started raining heavily and a look at the entrance to the Underground River and a couple of Monitor Lizards nearby was enough for me.  It was soon clear that it wasn’t a passing shower so we decided to walk back to Sabang on the Monkey Trail as planned.  I saw a Hooded Pitta, glimpsed a female Peacock Pheasant off trail and we saw Asian Fairy Bluebirds while sheltering in a clearing but otherwise little was evident in the rain until, almost back at Sabang, we reached the sandy shore where a pair of Malaysian Plovers were in residence.  The wooden bridge across the river here had been washed.  Fortunately we were able to cross in a small boat although by now we were so wet having to swim across is unlikely to have made much difference, that is if I could swim!  We finally reached the guest-house at 14:00, the main road was deeply flooded and apparently impassable in places and the rain continued heavily for the rest of the day and overnight making it impractical, owling-wise, to return to the Lions Cave at dusk even if we could have got there. 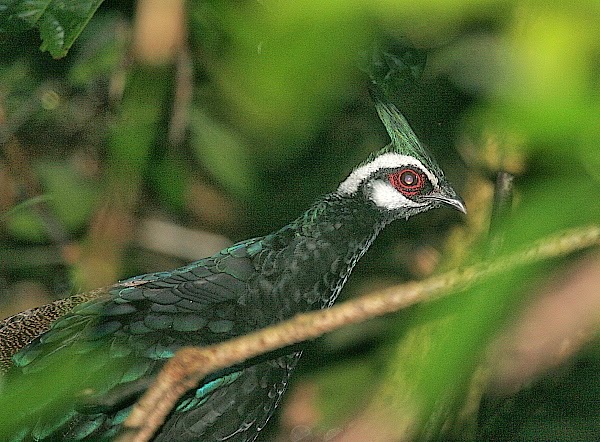 15 April.  Unfortunately it was still raining in the morning negating a final attempt for the Lion’s Cave nightbirds.  My unpreparedness on our first attempt had cost us dear.  Eventually the rain stopped and we spent two hours on trails near the Frontier Resort seeing Blue-naped Parrot, Chestnut-breasted Malkoha and Black-headed Bulbul.  Gerry and Graham stayed overlooking one area while we wandered off and were rewarded with a Philippine Cockatoo.  I’m not sure that our wandering produced anything.  We slowly made our way back to Puerto Princesa.  The first of several good stops was at a small bridge over a stream with a sizable gorge where we saw 2 excellent Ashy-headed Babblers, then walked in the forest along the stream and flushed a female Palawan Blue-Flycatcher from a nest containing 3 eggs located in the top of a 1.5m high tree stump.  Our next stop was at a steep hill through an area of tall mature trees where we saw 6 Palawan Hornbills, Common and Greater Flamebacks and an Olive-winged Bulbul.  I missed White-bellied Woodpecker while Gerry saw a male Palawan Blue-Flycatcher.  A Rockjumper tour group, led by Tim Fisher, were the only other birders we met during the trip.  A wader seen in a damp field turned out to be a Little Whimbrel, a rare record for Palawan while our next stop, in good forest, added Fiery Minivet, 2 superb Palawan Tits and Sulphur-bellied Bulbul.  Our last stop of note was at the deserted house on the brow of a hill just before Buenavista.  Here we took the track down to the mangroves seeing Copper-throated and Purple-throated Sunbirds.  We finally reached the private guesthouse just outside Puerto Princesa where Jon had persuaded the owner, a friend of our travel agent, to put us up following the late cancellation of our hotel reservation.  The later perhaps being related to getting a better/longer booking during the Asian Games.  Our hostess was excellent, I can understand why Filipinas are so popular, and provided a sumptuous meal for us including jumbo prawns (which I was easily able to avoid), sweet and sour tilapia (whatever that is) and mangoes (I had a lot of those). 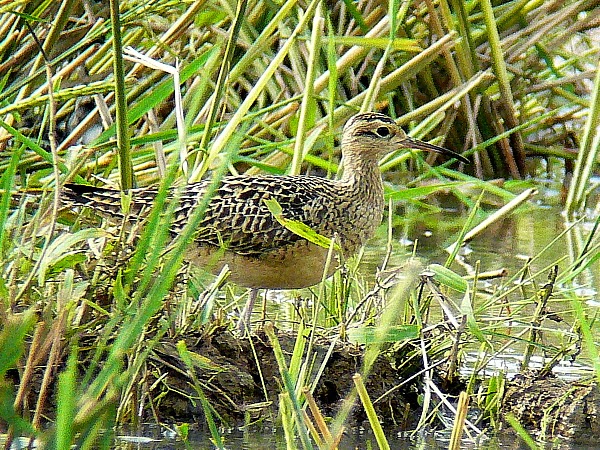 16 April.  Another early start saw us on the Balsahan Trail in the Iwahig prison colony at 06:00 with Danny as our driver and guide and with the necessary paperwork to get us in.  It was a good trail and we saw Melodious Babbler well but despite finding a vocal individual Falcated Ground-babbler led me a merry dance and disappointedly I never got the views the species obviously deserved.  Hooded Pitta was a different story as I heard and got good views of three.  Not so good with Palawan Flycatcher which we failed to find at all.  We had given ourselves about the right amount of time on Palawan, or would have done if we’d not lost so much time to rain.  It had been an enjoyable visit and somewhere I felt I would like to return to.  However my thoughts were getting ahead of myself and we’d not left Palawan yet.  We had just gone through the prison gates when Danny stopped beside the road and announced that the van had lost all its oil.  Fortunately he had a mobile and was able to phone for a replacement, but it was an anxious wait with a plane to catch.  Andy wandered off a short way and found a Long-toed Stint in breeding plumage which took our minds off the delay for a while.  A replacement van then did arrive and we dashed to the airport arriving at 10:15 for the 11.00 flight to Manila.  Close!  We arrived on time at 13:00 but unfortunately our 14:00 flight to Davao was delayed until 17:00.  We were met at Davao airport by Rudy and driven to Bislig, with the obligatory stop at Jollibee, and did not finally reach the Paper County Inn until 00:15!  It had been a long day and an early start beckoned.

Posted by richard fairbank at 21:45