This is the final part of a blog recounting a trip to Ecuador in 1999 with Michael Grunwell. I only had a pocket camera so no bird photos were taken.  The views have somewhat degraded too.

Cotopaxi (2-3 September).  Back in Quito we picked up a car and headed south to Cotopaxi, arriving early afternoon. We headed straight up to look for Rufous-bellied Seedsnipe but were caused some initial problems as the green bins we’d been told to look out for had been painted white!  We wandered around and eventually found a pair on the more barren slopes a couple of kms below the upper car-park, very nice.  Most of the other birds were around Laguna de Limpiopungo and it was nice to see Tanwy Antpitta again in the nearby scrub, although I only encountered three.  On my previous visit to Cotopaxi (in summer 1986) we’d slept in one of the refugios close to the laguna.  They were in considerable disrepair, making that no longer an option so we slept in the car nearby and were glad to have decent sleeping bags.  The following morning was spent birding the same general areas and seeing similar birds (including another pair of seedsnipe).  We then left to drive to Papallacta. 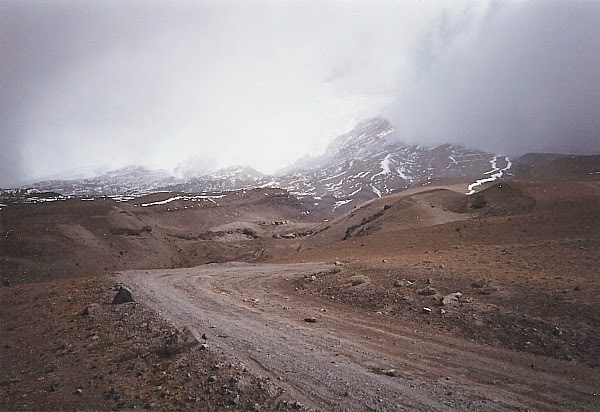 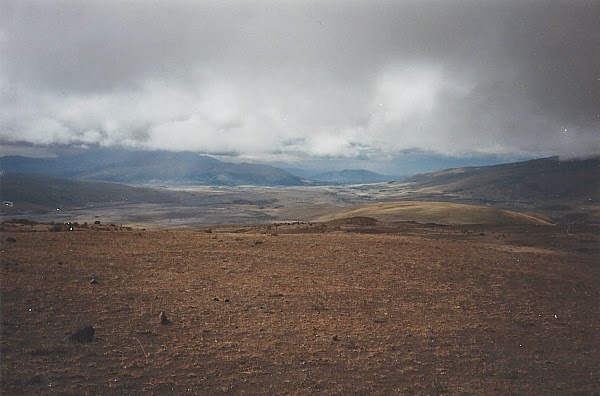 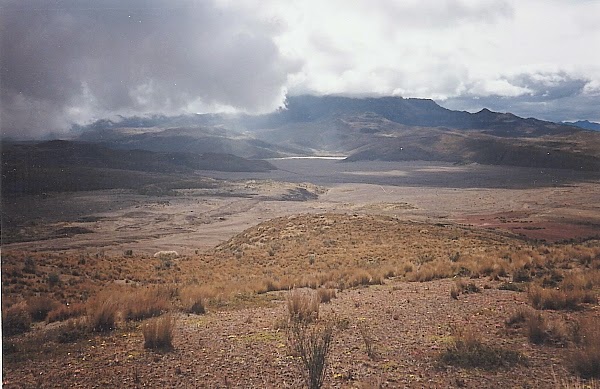 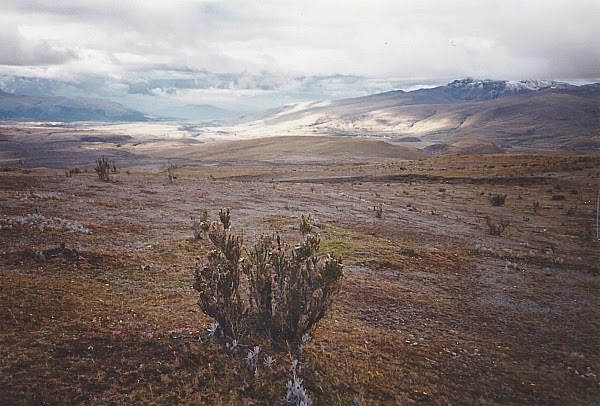 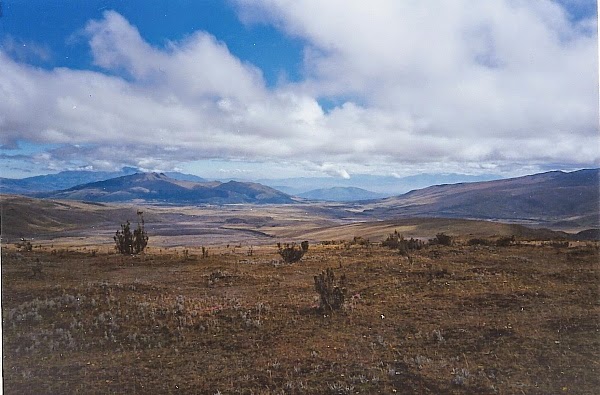 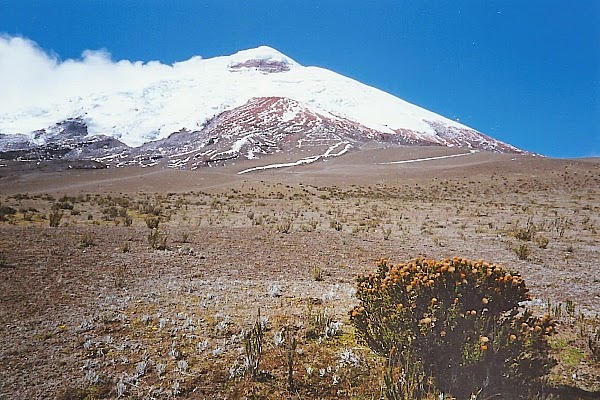 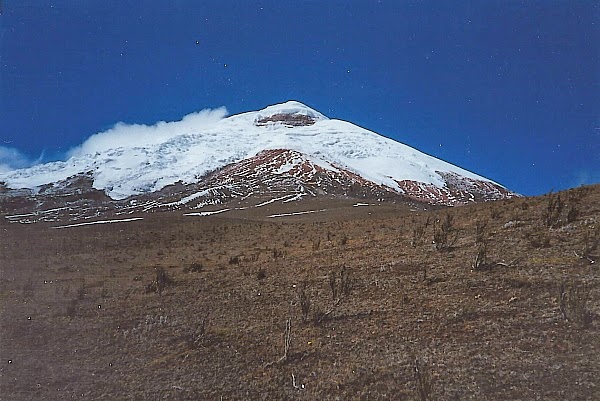 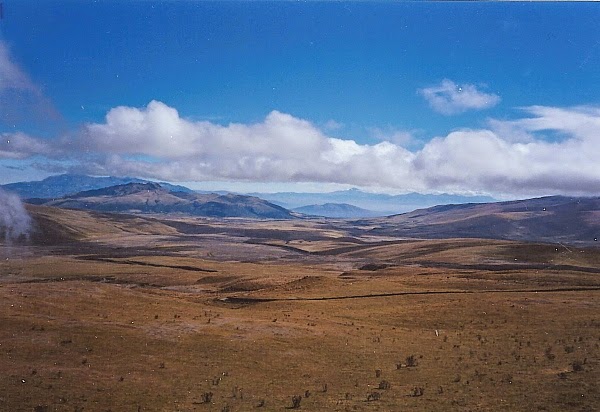 Papallacta Pass, Cabanas San Isidro & Huacamayos Ridge (3-6 September).  We arrived at Papallacta at lunch time and stopped in a few places before and after the summit.  The weather was not very good and few birds were in evidence so we decided to continue and try some sites on the way to Baeza.  About halfway there we found the road to be blocked while a van was recovered from having crashed down a steep slope.  This took over 2 hours and we did not get going again until just before dusk.  We arrived in Baeza early evening, having initially missed the turning in the dark.  We stayed in the pleasant, but basic, Hotel Samay, making it our base for 3 nights. 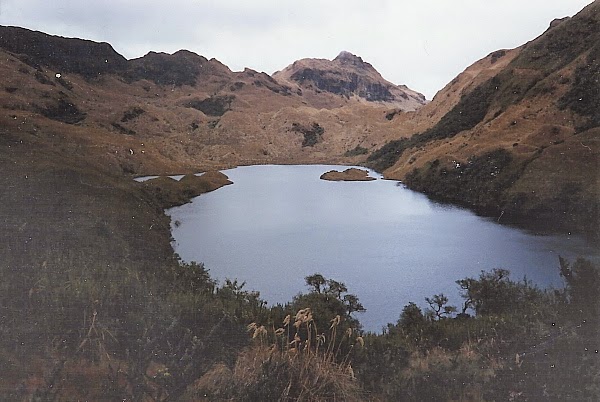 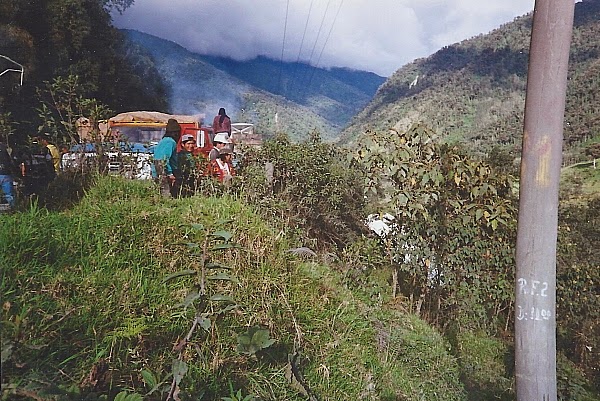 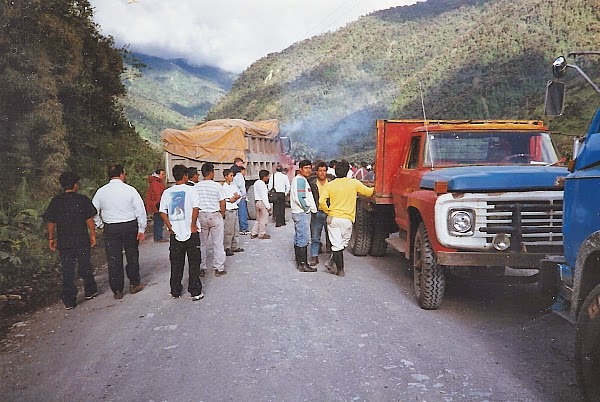 We left Baeza just before dawn, driving to Cabanas San Isidro in about an hour.  The main Tena road was very muddy in places and the track up to San Isidro even more so, although we managed in our saloon car (with one or two anxious moments).  The state of the road made us reluctant to travel far in the dark so we left San Isidro for the main road before dusk.  Scanning the main river at regular intervals each day produced one male Torrent Duck on one occasion.  It is possible, but very expensive, to stay at Cabanas San Isidro.  We had arranged to use the trails for $10 per person per day.  This too seemed very expensive as the trails were badly in need of maintenance (the famous log trail being under at least 6 inches of mud in several places).  Our impressions of Cabanas San Isidro were not helped by seeing practically no birds of interest during our day there (probably not helped by a malfunctioning microphone and almost continual heavy rain in the morning).  Our intention to spend four days in the area was soon put to the test and after a birdless morning at Huacamayos Ridge (in perfect weather) and an afternoon dodging heavy showers along the dirt road past San Isidro (where we actually saw more birds than at san Isidro itself) we decided to head back to the west slope.  This area was the biggest disappointment of the trip, although perhaps we should have persevered, but in the event our leaving the area early was to be the best decision of the trip.

On our return on 6th we left Baeza at dawn and stopped a number of times on the way up to Papallacta checking for dippers before finally seeing a pair under a large metal bridge which took the road over a large tributary.  A stop in Papallacta village failed to produce any Sword-billed Hummingbirds on the numerous datura flowers and a stop just outside town for Mountain Avocetbill was equally unsuccessful.  We then walked sections of the road up to the pass, in equally indifferent weather to that experienced on our earlier visit.  The pass itself was covered in cloud and we quickly returned to Quito and the west slope. 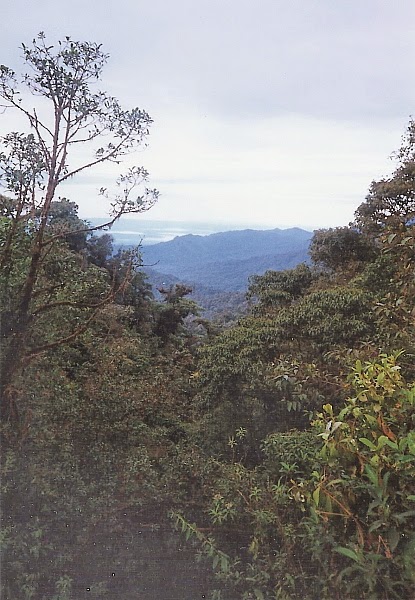 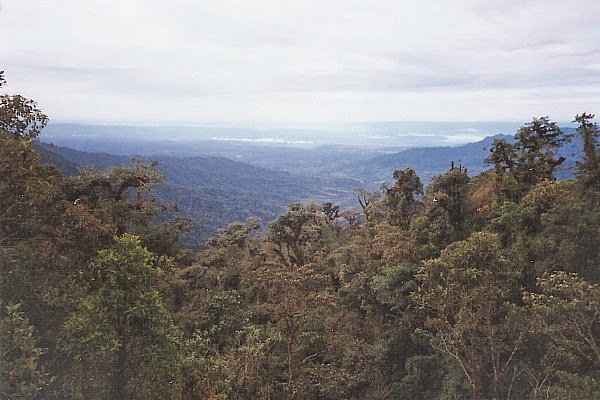 Mindo Lindo (6-7 September).  We put our disappointment with San Isidro to good use by returning to the west slope.  We arrived at Mindo Lindo from Papallacta early afternoon, were immediately made welcome by Pedro (who knew slightly more English than we did Spanish) and taken to the Club-winged Manakin lek, being shown a female Long-wattled Umbrellabird (which had been in residence for just over a week) on the way.  Three hours in the area of the lek only produced a female but this too worked to our advantage (not that it seemed like it at the time) as we decided to stay overnight and try to see a male manakin in the morning.  Pedro and Helke let us stay in a nice cabin they occasionally rent out and we were invited up for supper and made to feel a part of the family by them.  The next morning, before an excellent breakfast, we had excellent views of four male manakins lekking (birds of the trip) and saw a male Scaled Fruiteater.  Soon after we found a roosting Pigmy Owl which was being mobbed by tanagers which, I’m told, ‘must have been’ the newly described Cloud-forest Pigmy Owl!  Despite covering only a small area (we were never more than 10 minutes walk from the house) we thoroughly enjoyed our time there and in many ways Mindo Lindo was the highlight of the trip.

Los Bancos Road (7 September).  We returned to the Los Bancos Road for another couple of hours on 7 September, arriving mid-morning. The weather wasn’t as good as for our previous visit, with periods of rain, but the area produced some quite different birds.  We then returned to Mindo for lunch, stopped briefly at the new hotel track (but saw little there) and returned to Quito for our last night.  We had the car until the morning but Michael wanted a good night’s sleep before our journey home as he was going straight into work off the flight.  I was less bothered about that, and keen to save the cost, so I dropped Michael off on the outskirts of Quito.  After seeing him into a taxi I drove up to Yanacocha, arriving just before dusk.

Yanacocha (7-8 September).  I revisited Yanacocha for my last morning (Michael having returned to Quito for a good night’s sleep as he was going into work straight from the airport when we got back).  I managed to find my way to Yanacocha with no problems, arriving in thick cloud with about an hour of light left.  I saw little in this time and had a reasonable night in the car just inside the compound, having first checked with the watchman there that it was OK to do so.  The following morning I saw a couple of the birds we hadn’t found on the earlier visit (but no more tapaculos).  Some impressive activity from the nearby Volcan Pichincha provided a memorable finish to the trip. 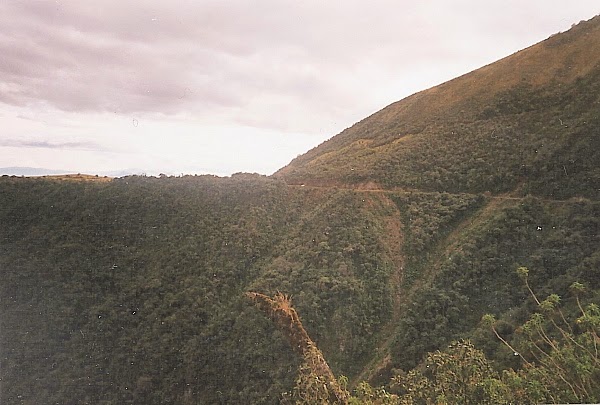 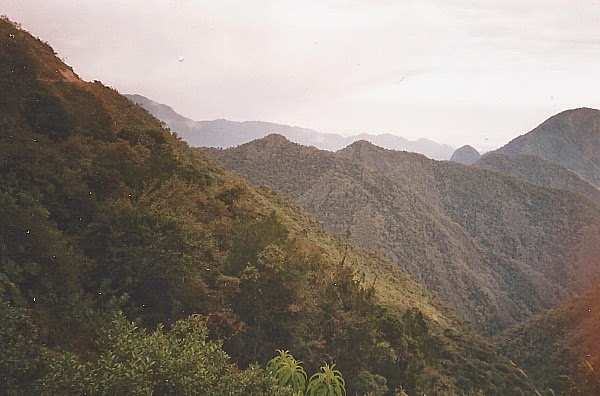 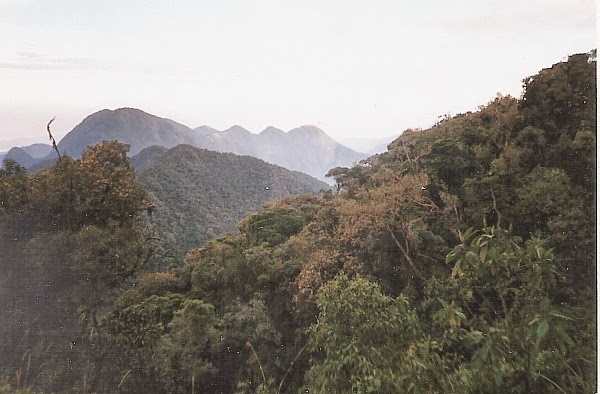 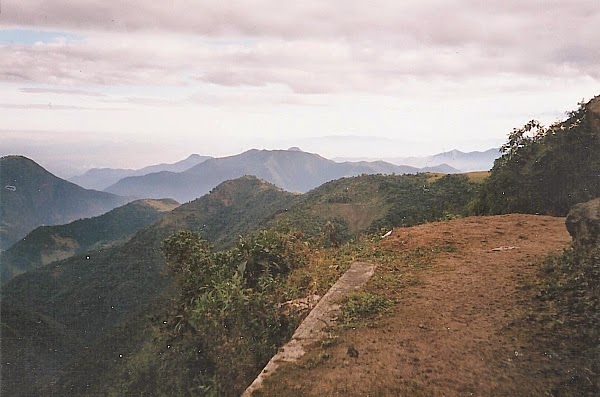 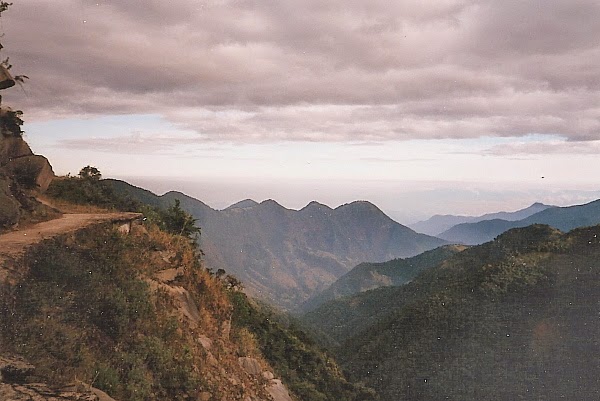 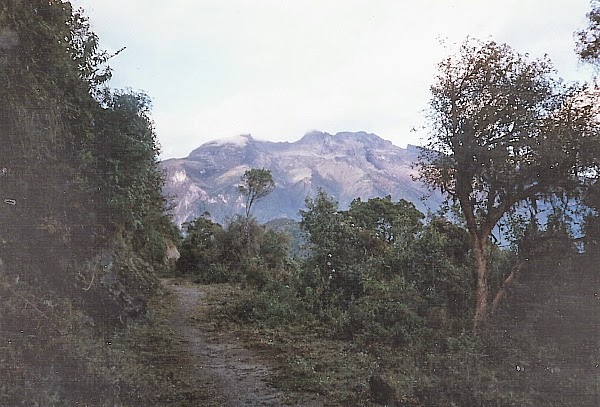 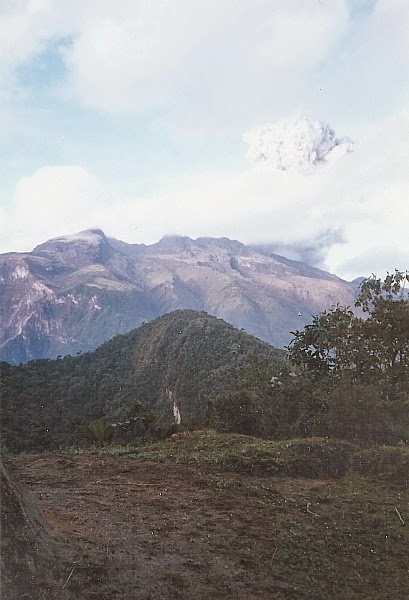 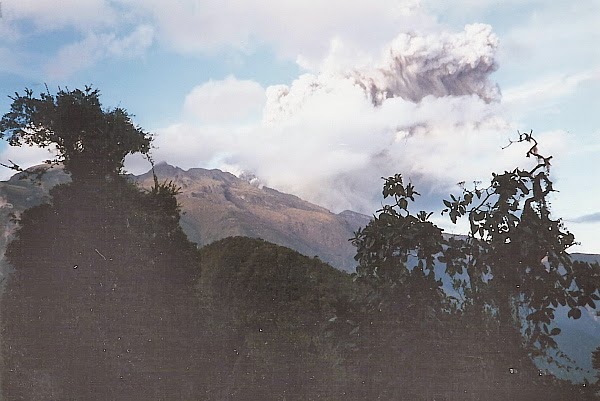 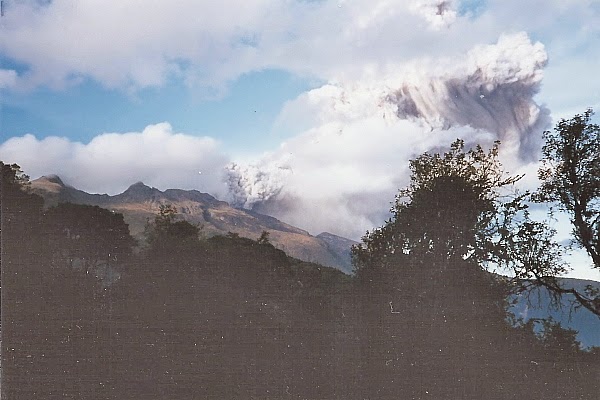 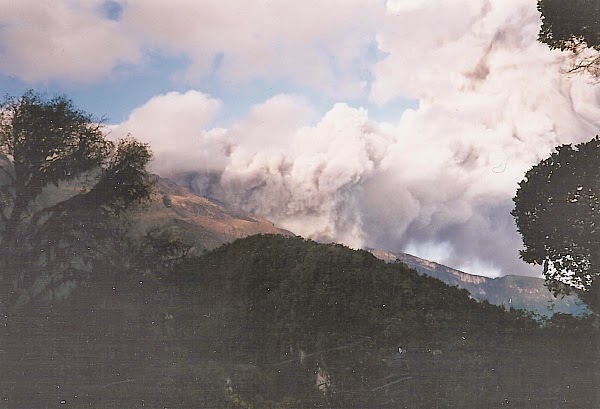 Thanks to Michael for his company during the trip, Tom Love for his while we were at Bellavista, Tony Nunnery and Iain Campbell for sharing time in the field (and floor space) with me and particularly Helke and Pedro for making us so welcome at Mindo Lindo.  By not going to the Galapagos the trip cost me about £1000 including airfares from England.