Introduction: An email from Jon Hornbuckle on the Oriental Birding chat group looking for two people to join a privately organised trip to the Tibetan Plateau was too irresistible to ignore. It was a part of the world I had wanted to visit ever since trekking up to Jomson in Nepal in 1979 and having to ‘turn right’ at Kagbeni when many mouth-watering birds were straight on (all be it several day’s walk). I contracted Jon, who I knew of but had never met, and although expensive it was not prohibitively so. My boss was understanding and let me have four weeks off during term time and I was going! Barry Wright, Edward Dickinson (the other OB recruit) and I booked KLM flights to Beijing where we would be met by our guide, Chinese resident Danish birder Jesper Hornskov who had run one previous trip on our itinerary. We would join Jon Hornbuckle, Ashley Banwell and Phil Heath in Xining, them having had three weeks in Sichuan.

This is first post giving my perspective on the trip. It is based on my scant notebook entries, unreliable memories and a report Jesper produced. Most of the photos included are digitised prints of views I took although a few of birds were kindly provided by Barry and Jon.

10 June 2000: I met Barry at Heathrow and Ed found us in the departure lounge at Schipol, Amsterdam despite my already having removed my six-year old son’s pirate cap I’d agreed to wear to aid identification. It had seemed like a good idea at the time but fortunately Barry and I studying bird books rendered it unnecessary.

11 June 2000: The flight was uneventful until approaching Beijing when one of the stewardesses told us the Great Wall was coming up on the left. We found a window and ‘flight views only’ took on a new meaning. Jesper met us in Beijing and we piled into a taxi to take us an hour into the busy, rapidly developing city seeing Azure-winged Magpie from the vehicle - my first new bird, we saw about 40 during the day. We dumped our stuff in the hotel and visited the Summer Palace hoping a late migrant might be present. We saw nothing out of the ordinary although 15 summer plumaged Chinese Pond Herons, 3 Yellow Bitterns, 100+ Swifts, a Hobby, 15 Oriental Reed Warblers, 2 White-cheeked Starlings and 6 Oriental Greenfinches (also new) were nice. Indian Cuckoo was only heard and my views of Black-browed Reed Warbler were little better. We returned via Beijing Zoo where Giant Pandas were the obvious star attraction. Jesper was disappointed Peking Duck wasn’t available for our evening meal. Disappointment was my main reaction to most of the food we had in China, although not on this occasion. 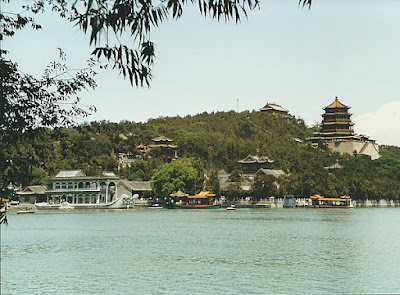 12 June 2000: After a reasonable night’s sleep and uninspiring breakfast we returned to the airport seeing just one Azure-winged Magpie on the way and caught an internal flight to Xining, Qinghai's provincial capital. The flight took nearly three hours and the airport, where our driver met us, was 30km outside the city. We were driven into Xining to a grey concrete building that was our hotel, comfortable enough just a pity the toilets were so basic. There we met up with Jon, Ashley, Phil and our other driver who had spent the morning birding at Laoye Shan. We were all driven up to the nearby eroded hills of Bei Shan (North Mountain). Here we saw 2 Daurian Partridge (just decent flight views for me), 3 Common Pheasants, 8 Blue Hill Pigeon, 4 Swifts, a Magpie (from the car), 6 Chough, a Shore Lark, 2 Rock Thrushes, 6 Black Redstarts, 10 Pale  Rosefinches, and male Meadow and 4 Godlewski’s Buntings. Three new birds was not a bad start on a mostly travel day although the hoped for Przevalski's Partridge eluded us.

13 June 2000: We were up before dawn and driving 40km north to Datong and the dry forest of Laoye Shan and Dong Xia. It was very dull and overcast, not helped by immense clouds of black smoke belching from a nearby power station. Dull soon became drizzle and then rain. It was also cold. A hot noodle breakfast wasn’t greeted with the same level of enthusiasm by most of us as it was by Jesper but at least it was warm. He had some foil-sealed dry compressed biscuits, the sort of thing an astronaut might survive on, which were more to my liking, at least initially. Despite the weather we were largely successful, highlights being 4 Daurian Partridges (much better views), 2 male White-bellied Redstarts, male Siberian Rubythroat, male Red-flanked Bluetail, male Kessler’s Thrush, a Spotted Bush, 3 Yellow-streaked and a Gansu Leaf Warbler, 4 Crested Tit-Warblers, Pere-David’s Laughing-Thrush, Songar Tit, 2 Przevalski’s Nuthatches, 3 Rufous-breasted Accentors, White-browed Rosefinch and a superb pair of Grey-headed Bullfinches. Seven species were new for me and most of the rest my first for at least 18 years. Crested Tit Warbler was one of my main targets for the trip although first views were a shade disappointing, being either brief, distant or both. We returned to Xining for a forgetable night.

14 June 2000. An early start saw us driving up onto the Tibetan Plateau and the fabled Koko Nor (Qinghai Lake) at an elevation of about 3200m. On the way we saw our first Daurian Jackdaws (3 pale and 2 dark birds) and 12 Hume’s Groundpeckers. The latter, now considered an aberrant tit, was highly desirable, its range not quite extending south into the areas of Nepal I was able to visit almost 20 years earlier. Birds seen at Koko Nor included 2400 Bar-headed Geese, 100 Ruddy Shelduck, 2 Garganey, 150 Red-crested Pochard, 11 Ferruginous Duck, 4 Goosander and 700 summer-plumaged Great Black-headed Gulls. We were a bit late for migrant waders but did see single Red-necked Phalarope and Red-necked Stint with 3 Lesser Sand Plovers amongst 50 or so Kentish. On the marshes nearby were 3 distant Black-necked Cranes while passerines included 6 Mongolian, 20 Long-billed Calandra and 25 Hume’s Short-toed Larks, 20 Pale Martins, 15 Isabelline Wheatears, 3 Citrine Wagtails, 4 Twite and 6 White-rumped and 6 Pere-David’s Snowfinches. We stayed in the equivalent of a very basic motel in Heimahe which just about boasted a view of the lake. Despite being mid June it was decidedly cold at night.
15 June 2000. Another early start and a drive west into the desert near Chaka to a site of Jesper’s for Henderson’s Ground Jay. Spreading out on arrival we soon found a pair although it took a while to obtain good views. It was a superb clear morning and I ended up seeing about 8 jays while 38 Pallas’s Sandgrouse, mostly flying over calling in parties of 1-6, provided a very evocative distraction. We also saw 6 Hume's Groundpeckers, 25 Shore Larks, 8 Isabelline and 5 Desert Wheatears, 7 Blandford’s, 3 Rufous-necked and 3 Black-winged Snowfinches, 5 Twite and 5 Mongolian Desert Finches. At a small oasis an oriole was singing but remained unseen, seemingly well out of range for either Golden or Black-naped, while 5 Asian Short-toed Larks here was hardly inspiring. Returning towards Haimahe the weather worsened and we spent the rest of the day on scrub covered hillsides looking for 'Przevalski’s' with mixed success (again). His redstart eluded us but we found an excellent pair of Prezvalski’s Finches. Lammergeyer, 3 Brown, 3 Robin and 2 Rufous-breasted Accentors, female Himalayan Rubythroat, 2 Blue-fronted Redstarts, 6 Tickell's Warblers, Stolizka’s Tit-Warbler and 3 Beautiful Rosefinches added to the Himalayan feel as did the now inclement weather.
16 June 2000. We returned to the scrub-covered hillsides at Zakov Shamov at dawn and searched ever increasing areas for several hours for Prezevalski’s Redstart before Ashley, who had ventured the furthest, found a male on a distant hillside. Fortunately it stayed and although mobile afforded good views. Another major bird seen. The area also produced superb views of a male Wallcreeper, White-browed Tit (the day's other new bird for me), 2 Tibetan Snowcocks and a singing Prezevalski’s Finch. We continued on to Gonghe stopping by some roadside fields where we found a male Pine Bunting and later seeing Upland Buzzard, 20 Blue Hill Pigeons, a Little Owl and a rather mangy looking Tibetan Wolf by the road. In Gonghe we stayed in the Iron Curtain hotel, about as impressive as the image its name conjures. A singing Desert Lesser Whitethroat in the small front garden made it an unexpectedly good choice although there was not an alternative.
17 June 2000. Mainly a driving day, from Gonghe to Wenquan, an Eagle Owl seen roosting in a roadside quarry was an early surprise. We stopped at an arid wadi failing after a long search to find Prezavalski’s Partridge (again). A later stop in a gorge (imaginatively called The Gorge according to Jesper) was more productive with pairs of both Guldenstadt’s Redstart and Great Rosefinch and a female Wallcreeper. Further on 3 Pallas’s Sandgrouse flew low over the road. Other roadside birds during the day included 6 Himalayan Griffons, 2 Lammergeyers, 4 Upland Buzzards, 20 Blue Hill Pigeons, 50 Shore Lark,4 Chough, 15 Hume's Groundpeckers, at least 50 Black Redstarts, 10 Isabelline and 2 Desert Wheatears, male Rock and 4 Kessler's Thrushes and a brown morph Dipper. Mid afternoon we stopped at Er La (about 4500m) and climbed 250-300m up the hillside above the road. It was good acclimatization for a longer rather daunting climb up to a plateau planned for the following morning and also a good site for the superb Roborovski’s Rosefinch of which we found two pairs. They did not disappoint. I also saw a Pacific and 10 Common Swifts, 6 Shore Larks, another Guldenstadt’s Redstart, 2 Brown Accentors, 3 White-winged Snowfinches and 2 Brandt’s Mountain Finches. We continued, dropping down to Wenquan (3900m) where we stayed the night in a very basic motel. Despite being lower it didn’t feel much warmer. 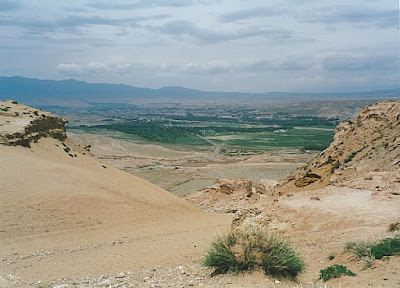 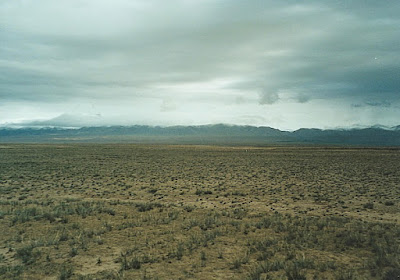 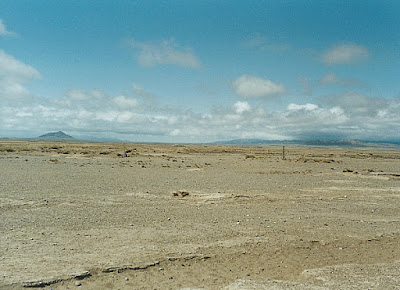 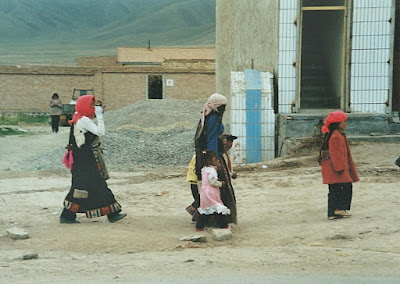 [posted July 2019, a year after Jon Hornbuckle's untimely death. It was the first of 11 trips I was to do with Jon and 'revisiting' this trip brought back some very happy memories of him]

Posted by richard fairbank at 12:39