This blog recounts the second part of a recent trip to Ecuador with Marc Brew, Jon Hornbuckle and Rod Martins.  We had been to Paz de las Aves and Pululahua and arrived at Playa del Oro as it was getting dark on 20 January.  All images were taken with my Canon Powershot SX60.

21 January.  All day at El Tigrillo.  We had breakfast as it was starting to get light and spent the morning on a trail behind the lodge.  It was nice forest, not too hot and with few insects but birding was hard work, not helped by some heavy showers and few places where the canopy could be viewed.  We returned for a good lunch and were ferried across the river to spend the afternoon on a trail there although the rain was more persistent and it wasn’t very productive.  We got back to the lodge late afternoon and the electricians had fitted lights in my room although they were not yet plugged in.  Heavy rain prevented any owling so I had an early night.  It had been a reasonable if somewhat tiring day and I had good views of my main target species, Sapayoa, but more was heard than seen, not that I knew what most of the calls were.  Other birds of note were Olive-backed Quail-Dove, Rose-faced Parrot, Purple-chested Hummingbird, White-whiskered Puffbird, Stub-tailed and Spotted Antbirds, Golden-crowned Spadebill and Stripe-throated Wren. 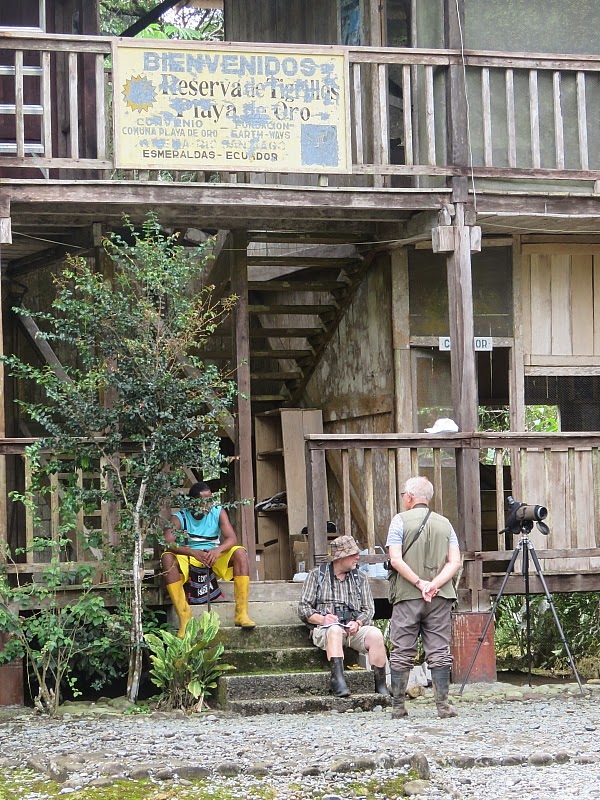 22 January.  A much drier day but birds were still proving very hard to find.  We spent the morning across the river and the afternoon behind the lodge.  Highlights were Crested Guan, Choco Trogon, Choco and Chestnut-mandibled Toucans, Dot-winged Antwren, Southern Nightingale Wren and Dagua Thrush.  We heard Lanceolated Monklet but were unable to spot it, not that I was completely sure where the sound was coming from.  Baudo Guan was another heard only although was rather more distant and not so frustrating.  We also saw Brown-headed Spider-Monkeys and a Two-toed Sloth disappearing into the canopy.  The lights were working in my and Jon’s rooms but Marc and Rod’s were still to be done.  We took advantage of a dry evening to walk the trail behind the lodge but only heard Spectacled and Choco Screech-Owls rather distantly.


23 January.  We spent our final morning behind the lodge on the trail that we had walked the previous afternoon.  We saw quite a few different birds along it but unfortunately none of our particular targets although Berpelsch’s Tinamou was distantly heard.  We also failed to bring in a calling Streak-chested Antpitta, something I’d not seen since 1985.  Best birds were Plumbeous Hawk, Band-tailed Barbthroat, Collared Aracari and Blue-crowned Manakin.  I had enjoyed our stay but felt we had not done the place justice with too short a stay, not helped by the weather and not finding an antswarm or decent bird flock.  Our bags were packed into the canoe and we motored back to Selva Alegre, taking just over an hour with the flow of the river helping us.  Now we were leaving the weather finally seemed to have broken and we saw blue sky again.  Gabo collected his vehicle (it had been left for safekeeping at a relative of Julio’s) and we set off for Tunda Loma a site for Brown Wood Rail.  We paid a nominal entrance fee to bird in the grounds of a pleasant looking lodge although the area where the Wood-Rails were was by a creek with lots of particularly vicious mosquitoes in residence.  The Wood-Rails were responsive but stayed in cover on the opposite side of the creek while we increasingly bitten.  The Wood-Rails moved away and we gave up, Gabo driving us to Salinas and Oasis Hotel.  It might have been quite nice in daylight but it far exceeded our needs, arriving mid-evening and leaving well before first light. 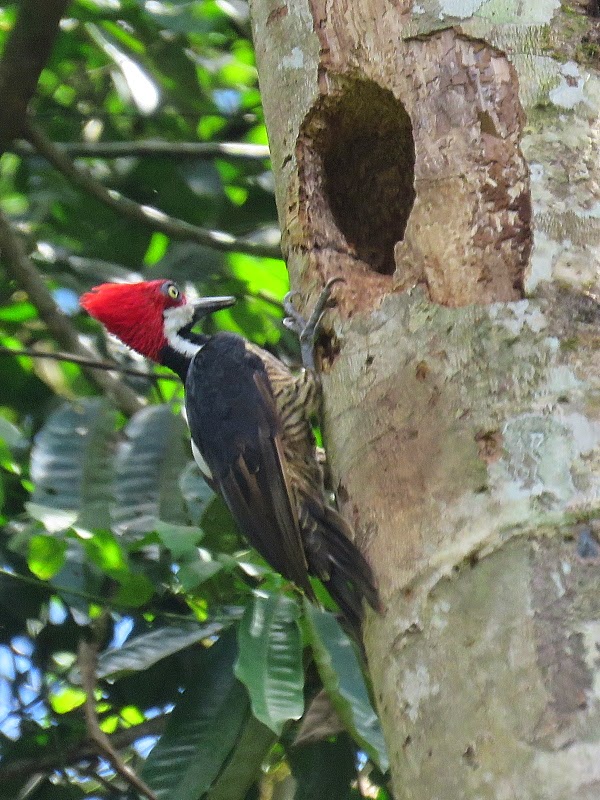 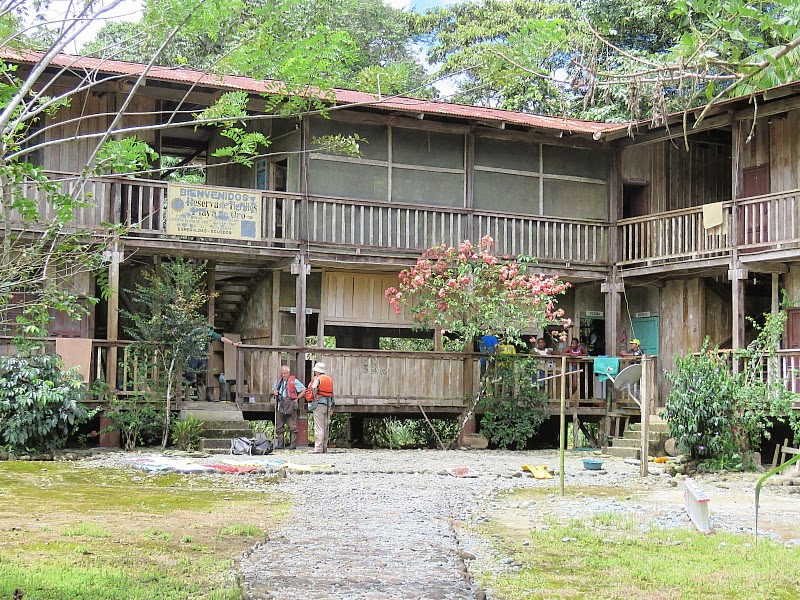 24 January.  We were up two hours before dawn to drive as close to Cerro Mongus as possible.  Gabo had not been before but had good directions and we found ourselves in a scattered hillside village as it was getting light.  We were directed to the local shop and persuaded the owner to open early for us.  We then probably bought more snacks and biscuits than he sold in a week.  He directed us up the road and while it was cobbled it was fine but overnight rain made it treacherous when it became dirt.  Very soon the vehicle lost traction and slipped into a ditch.  We left it and started walking after a few attempts to get it out of the ditch failed.  It was a steep and slippery 90 minute climb to the start of the forest.  We continued looking for patches of bamboo in which we hoped to find Crescent-faced Antpitta.  Before we realised it we had come out on the other side and after a brief debate decided to retrace our steps and try more thoroughly.  This we did getting a response slightly more than halfway back through the patch of forest and in an area, like most if it, with hardly any bamboo.  After a fairly tense 10 minutes of the bird seeming to get closer but remain out of view, and me feeling here I go again following similar disappointments in Colombia last year, I noticed a slight movement low down deep in the vegetation.  I raised my binoculars and it took a while to realise what the two lines of colour were that I was looking at – the crescent and ear covert bar of the head of a Crescent-faced Antpitta!  While I was getting the others onto it it hopped up onto a more obvious branch where it was pretty much in full view for 10 or 15 seconds.  Brilliant, but just when I though I ought to be trying to get a photo of it it dropped out of sight with a second bird, until then unseen, quickly following it.  This had been one of my 'hoped for but did not really expect to see' species so I was delighted, as we all were.  We continue back to the tree line and followed the edge of the forest for about a kilometre to an aquifer with a narrow path alongside which went into the woods.  Almost immediately a smallish antpitta hoped across in front of me, most likely Rufous.  We continued along the path to the second scree slope which was a good place to watch for Chestnut-bellied Cotinga.  Here, after the distraction of a calling Tawny Antpitta, we settled down to wait and hope that a cotinga would perch up in view but it was not to be and halfway through our two hour vigil disaster struck.  I’d left my camera in my cap on the path by the aquifer while I walked on 50m to check a different area.  On my return there was no sign of my camera, just an empty cap.  Jon had inadvertently knocked it into the aquifer and I yanked it out to find it was somewhat waterlogged.  In hindsight it was a daft place for me to leave it (Marc had a very good belt clip for his Lumix which would have saved me from leaving mine unattended).  The cap, rather than offering protection, only made it easier for it to tip into the ditch.  Very annoying as we were barely a week into the trip although Jon saved the day for me by very kindly lending me his camera for the rest of the trip, the previous Powershot model, the SX50.  We started back down with Gabo going ahead to try and get his car sorted, something he succeeded in doing just as we got back.  We had had a bit of sunshine which had dried the road out a little.  It may have made the difference.  We decided to return to Pululahua to try again for the Buff-fronted Owl as the owner and birder Renato would be there and might be able to suggest better areas to look.  We arrived at 21:00, had a good meal and went owling at a new site but with similar results.