This is the third of four postings covering a recent trip to Southern Mexico with Jon Hornbuckle, Brian Foster and Rod Martins. Eric Antonio Martinez of Mexico-Birding Tours (http://mexico-birding.com) expertly guided us around in his Jeep Compass. We had been at El Triunfo for several relaxing days and were now on a whistle-stop tour travelling to the Los Tuxtlas area of southern Veracruz then back south to Oaxaca.

27 February. Mainly a travel day during with Rod ill for most of it. It seemed likely to have been something he had eaten although he’d not had anything different from the rest of us. We left our hotel in Tuxtla Gutierrez soon after 06:00 and soon made a coffee stop. I stayed outside hoping a Green Parakeet might fly over as it was getting light. One did, flying low along the street, but it was a poor view. We drove to El Ocote, unfortunately not the Nava’s Wren track but to another turning where we checked roadside scrub for Rufous-breasted Spinetails. None responded but we did entice a smart Spot-breasted Wren into view. It was then a long drive to Catemaco. We had a brief stop at Malpaso Lake before leaving Chiapas and a quick look at Laughing Gulls and mainly Royal Terns on Lagunas Catemaco shortly before arriving at 15:00. It was another touristy area and a hotel we tried on the lakefront was expectedly more expensive than we were comfortable with. Another inland was surprisingly a similar price but we found a third, a new hotel unimaginatively called Hotel Catemaco that was much more reasonable. We left Rod in the hotel still not fully recovered and birded around the lakeside and in some wooded foothills nearby. It was generally poor although a superb Hooded Warbler was much better than I remembered them being, albeit 36 years ago.

28 February. We left the hotel at 05:30 and drove up to Sierra de Los Tuxtlas seeing 7 Pauraques on the road before dawn and 2 Hermit Thrushes and 2 Ovenbirds soon after. Soon we were in decent habitat and took a narrow trail further into the forest that Eric knew. After some rather more than speculative playing of Tuxtla Quail Dove recordings one responded distantly. Eric continued playing but with no further response I was beginning to worry it wasn’t interested. Eric kept playing and suddenly picked out the Quail Dove as it unobtrusively circled us. It showed briefly four times in total. I missed the first two sightings and concentrated on watching the trail which it fortunately crossed and re-crossed. The forest was otherwise quiet and we decided to try the road. This was better lower down where it was more open and a Rufous-breasted Spinetail was enticed into view. We also saw Buff-bellied Hummingbird, Violet Sabrewing, Yellow-breasted Chat and Northern Cardinal. We returned to the hotel, checked out and drove to Tuxtapec. We stopped at a roadside marsh on the way seeing a good selection of common waterbirds including Gull-billed Tern. We arrived in Tuxtapec at 17:00 and checked into Marie de Lourdes.


29 February. We left at 05:30 and drove to a good patch of forest at Beptanya. We were trying for Sumichrast’s Wren but were soon distracted by two calling Mayan Antthrushes. It showed briefly twice but both times I was unsighted or too slow onto it. The wren then started calling, presenting me with a dilemma. It wasn’t showing so I concentrated on the antthrush and was soon joined by the others. With Eric’s help we had good views of two and continued further down the trail trying for the wren. This took a while but eventually we found a more responsive bird and obtained decent if somewhat distant views around the base of some boulders. We also saw an excellent White-bellied Wren and a Worm-eating Warbler – only my second, the first at Point Peele in 1980! We returned to Tuxtapec and only just avoided being gridlocked by protesting lorry drivers who were in the process of blocking the road in. We collected our bags and quickly left managing to exit town before it completely shut down. We drove to Valle National arriving at Hotel Villa Real at 14:00 for a late but decent lunch.  We drove further along the road (highway 175) looking for Curve-winged Sabrewing without success. We finished along a track near town where we saw Northern Bentbill and a vocal Stub-tailed Spadebill flew across in front of us. We stayed after dark trying for Middle American (Variegated) Screech Owl. One responded briefly and sounded close but we failed to spot it. A Mottled Owl calling from further along the track might have been the reason the screech owl shut up but we were happy to try for it instead (it was new for me). It soon came in giving excellent views. 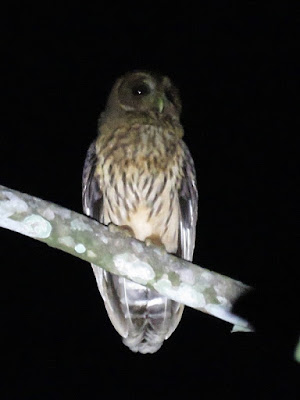 1 March. We left at 05:35 and returned to the nearest forest where we had heard the Screech Owl. It responded, the Mottled Owl was quiet, and Eric spotted its throat moving as it called – amazing. We had brilliant views and immediately returned to Valle National to collect our bags. We continued on highway 175 spending most of the morning looking for Curve-winged Sabrewing. We all had flight views with two or three birds involved but none settled in view making it a very frustrating experience. Another frustration for me for much of the morning was Slate-coloured Solitaire of which several were singing for the forest beside the road. I saw the shape of one flying out of a tree before Eric eventually found one in a more isolated tree. It gave good but brief views before dropping out. Shy birds. Highlight of the area though was definitely Bumblebee Hummingbird of which we saw several. It flew just like a large bee and sounded like one too. Amazing. We continued to a high pass at Mirador del Cerro Pelan for a brief stop. A track to a large woodshed near the pass was very productive with Russet Nightingale Thrush, White-eared Hummingbird and White-throated Towhee. On the other side of the pass it was much less verdant and we finished along a dry valley at Puente de Ferro (Iron Bridge). Here we saw Violet-crowned and Dusky Hummingbirds and Black-vented Oriole and heard Blue Mockingbird. We left at 17:45 for the 90 minute drive to Oacaxa. Eric left us at Hostel Paulina where we had a room for 4 and drove home. We were only a few blocks from the centre of town but were content to eat in a restaurant opposite. A very good day. 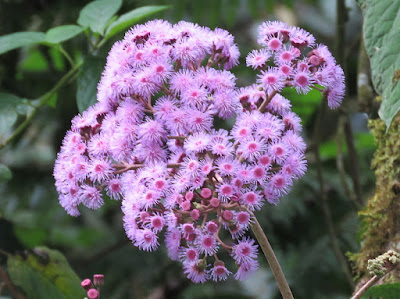 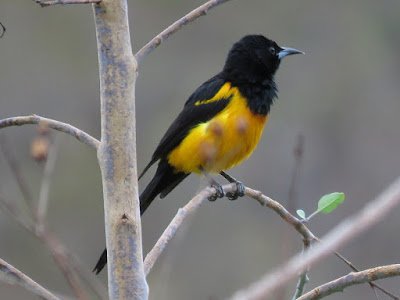 2 March. Eric picked us up from the hostal at 05:45 and we arrived at La Cumbre at dawn. It was here that Eric had seen a flock of 40 Aztec Thrushes the previous month. Encouraging news, as was it being the biggest flock he had ever seen. Less encouraging was that he returned a few days later, also at dawn, and failed to see any. They were highly nomadic in search of fruiting Madrone trees an event which itself was very irregular. Learning this rather dented my hopes but we still had a sense of anticipation driving the contouring dirt road at first light with mainly coniferous forest on either side. A corner or two before where Eric’s flock had been we saw a couple of thrushes at the side of the road. Eric immediately stopped, not that we were going very fast. They were Aztecs, about 5 in total. Brilliant, although getting out of the vehicle to approach was probably not a good idea as they soon flew away up the hillside. The road gently declined at this point and we continued walking towards the corner hoping to see more. Brian and I became distracted by a fast moving flock of mainly Hermit Warblers in the tops of conifers below us, very smart, but when we rounded the corner we could see the others watching more thrushes beside the road where a small stream crossed in a gulley. They were coming to the stream briefly, to wash or drink and soon flying off up into the woods. Up to 15 had been present although I probably saw 10, some hanging around long enough for photographs although the light was poor and the distance against us. We continued birding down the road leaving Jon to return to the gulley. He walked up it some way hoping for more thrush views but they appeared to have moved on. We soon saw the first of several Red Warblers, very smart but rather active. Eric collected Jon and we drove on a bit further and walked another section of road. It was an area where Eric had seen Dwarf Jays and he eventually heard some. A quick moving flock of about 15 jays came through giving mainly fleeting glimpses - I saw 2 well and those were brief views. We also saw Rose-throated Becard, Steller’s Jay, Grey-barred Wren, Mexican Chickadee, Russet Nightingale Thrush, Collared Towhee, Rufous-capped Brush-Finch and more Red Warblers. We returned to a café on the main road for lunch but nothing on the menu was very appetising and rather than join the others heading a bit further down the road for trout I decided to walk back into the forest for an hour. I saw Brown-throated Wren and MacGillivray’s, Crescent-chested and Golden-browed Warblers. I was almost back at the road when the others appeared. The trout had been good but I was happier birding. We had some discussion about what to do next and as a compromise decided to revisit the Aztec Thrush gulley before returning to Oaxaca. There was no sign of any thrushes, sadly, but while we waited in the area Eric heard a distant Mountain Pygmy Owl and started whistling it in. Rod had wandered off around the bend of a trail, and thinking it was likely a new bird for him (it was for me) I followed. There was no sign of him around the bend so I blew the whistle he had given me for such eventualities. He blew a reply and I returned but was somewhat perturbed to find the others looking up into the tree directly above them. The owl had flown into it but had not been located. Fortunately a change of angle allowed it to be and we had rather neck-breaking views mainly of its belly. Views were a little better from further back or along the road and a couple of times it looked down at us. We left La Cumbre at 16:00, a very enjoyable and successful day, and drove back down to Oaxaca. We stopped three times in areas of scrub on our return finding West Mexican Chachalaca, Spotted Towhee and Chipping and the restricted range Oaxaca Sparrow. Sadly our only Lesser Roadrunner sighting was of a roadside corpse. It was to be my only encounter. Eric dropped us back at Hostal Paulina at 18:15 and we dumped our stuff and rushed to the main square just making it before dark.