20 March. Still very quiet, 07:10-08.40, at Shoreham Fort as the cold northerlies continue. No Wheatears and two Sandwich Terns flying east the only evidence spring might be approaching. Two Rock Pipits looked interesting and three Purple Sandpipiers and 20 Turnstone were roosting at high tide. Later Megan and I walked around Cissbury Ring which, perhaps not unexpectedly, was almost birdless with Chiffchaff heard, 3 Greenfinches and a Yellowhammer. 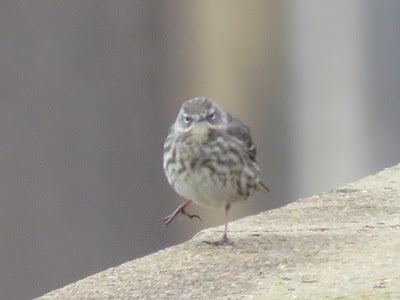 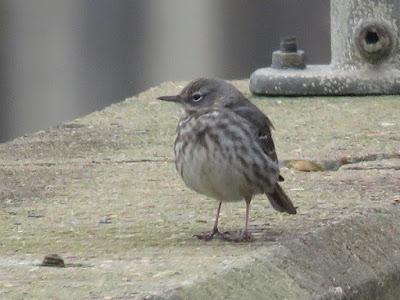 19 March. Very quiet at Shoreham Fort as the cold northerlies continue and the first Wheatear fails to appear. During 08:00-09:10 four Purple Sandpipers on the wooden jetty, two very distant Common Scoter, a pair of Red-breasted Mergansers and a Gannet were pretty much all I noted. A Peregrine was on the lighting gantry just west of the Power Station. Recent sightings suggest they might be breeding on the flat roof there.

18 March. A day off and an hour at Shoreham Fort where a Goldcrest and 9 Meadow Pipits came in off the sea - hard work for them in the cold northerly wind. Passage was restricted to 3 Red-breasted Mergansers and 31 Black-headed Gulls flying east while 5 Brent Geese seemed content sitting on the sea. One Purple Sandpiper was on the wooden jetty and a Peregrine on the corner of the Power Station. Two Chiffchaffs were at Widewater, one singing, although I gather they had been around for a few days. Later at low tide the gulls on the Adur included North Thames Herring Gulls AU9T and P3GT, I had seen both there in mid November.


17 March. A Peregrine on on the corner of Shoreham Power Station on my way home.

16 March. Megan and I visited Boxgrove and the Trundle. We saw a Coal Tit and 4 Buzzards. Two Buzzards were at Mill Hill on our return while a bird appearing to show some Rough-legged features - white rump and tail with dark terminal bar - was over the A27 near Eartham. Megan was driving and it wasn't somewhere we could have stopped, besides only van drivers claim rare raptors from the A27.
14 March. Two Peregrines on the corner of Shoreham Power Station on my way home.

12 March.  Thick fog over the Adur and poor visibility at Shoreham Fort with the fog bank to the west not clearing during the hour I attempted a seawatch.  Only 2 Brent Geese and 14 Black-headed Gulls made it through the fog but a Black Redstart singing briefly from the Fort railings, the Glaucous Gull on the western beach and a Grey Wagtail arriving on the harbour wall made the visit worthwhile. Quite a change in the afternoon with bright sunshine and a Greenshank by the Houseboats.

11 March. Tide not quite so low and nothing of note amongst the gulls on Southwick Beach but the Glaucous Gull was on the inner arm of Shoreham Harbour.

10 March. Nice to be going home in daylight and with the tide low there were plenty of gulls on exposed mud to look at. They including an adult Mediterranean on Southwick Beach and the first-winter Glaucous Gull on Kingston Beach.

9 March. Still on Mexico time and not enjoying the cold weather! Megan and I walked around Steepdown seeing 15 Sky Larks, Yellowhammer and 40 Corn Buntings. Late afternoon 5 Ringed Plover and a Dunlin with the Short-eared Owl somewhat distantly flying around the rough ground west of the Airfield.
Posted by richard fairbank at 19:20