This post covers the second part of a trip Megan and I made to Northern Norway and Finland. We had driven from Oulu up to Nordkapp and across to Varangerfjord and were now heading back south ...

Saturday 28 May (continued).  We drove south towards the border when a bird I couldn't immediately identify flew across in front of the car. It was a poor view but suspected it might be a Hawk Owl. I stopped and fortunately located it in a distant tree. It was! I started to walk towards it when it flew in our direction and landed quite close to the car for several minutes before flying off.  Our last bird in Norway but a really excellent one. It was approaching lunchtime and we stopped in a lay-by but an unpleasant smell had us continuing to the next one.  Finland was not to be outdone with another Hawk Owl seen in trees opposite although it dropped out of sight before I could photograph it.  We continued south on the E75 taking a short walk into Paistunturi Wilderness Area before stopping at Neljan Tuulan Tupa. This was a recognised site for Pine Grosbeaks visiting the feeders and I hope to see Siberian tits doing the same.  We had booked to stay the night back in December, however a week before we left the UK we were informed that they were not able to honour our booking.  An hour looking at the feeders produced two Pine Grosbeaks and a few Bramblings and Greenfinches on the seeds but no Siberian Tits, maybe not the best time of year. We continued south for 15 minutes to Kaamasen where we checked into a nice cabin and spent the rest of the day exploring a nearby track by a disused wartime airstrip. Nice habitat - mainly coniferous woodland and boggy lakes - but very low bird densities in the forest although male Velvet Scoter, Smew and two summer Spotted Redshank were nice. 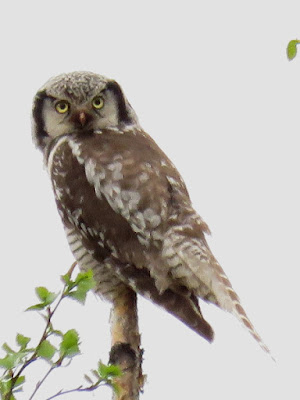 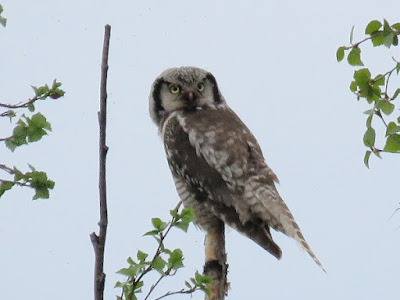 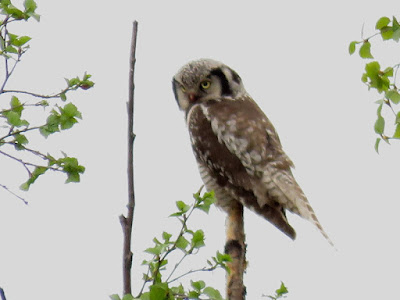 Sunday 29 May. I was up at 04:30 and returned to the feeders at Neljan Tuulan Tupa. After half an hour of seeing a single Pine Grosbeak I let my impatience get the better of me and returned to the old airstrip track.  I drove as far as the boggy lakes and walked through the forest for over two hours.  Small birds were virtually non-existent and perhaps I should have stayed at the feeders, although there were five Velvet Scoter, four male Smew and my first Greenshank and Reed Bunting on the boggy lake. I returned for a decent breakfast and we left just before 09:00 to drive south almost 500km to Kuusamo. We stopped in a lay-by for lunch and again briefly at a rather large Arctic Circle marker before turning off at Ruka to try and find Valtavaara Hill, a good area for Siberian Jays. We soon found Konttainen Hill just to the north and walked up through nice looking forest to the top where views were excellent. Birds were lacking, other than a single Mistle Thrush, and we tried to approach Valtavaara from the south, several times taking wrong turnings in and around Ruta which appeared to be a deserted ski resort. We eventually found the area I was hoping to but were running out of time and still had a 30 minute drive to our hotel.  Once checked in we walked around the town and down to some lakes encountering our first clouds of midges and three Red-necked Grebes. After we had eaten I considered returning to Valtavaara but was quite tired and felt an early morning visit would be better. 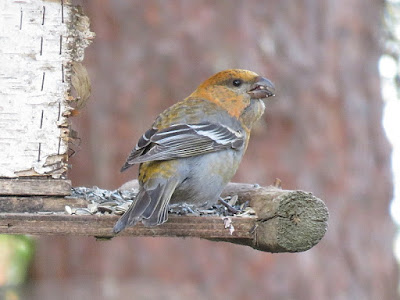 Monday 30 May. I was up at 03:20 and at the start of the Valtavaara Hill trail at 04:00, I did a slow circuit taking 3.5 hours before returning for breakfast at 08:00. A Pine Grosbeak was sitting up on the ridge, Bullfinches and Siskins flew over and coming back I flushed a female Capercallie. A few hundred metres further on a predominantly black shape with some white on it moved from behind a log. Expecting a badger or similar animal I was quite surprised when a male Capercallie walked out onto the trail ahead of me. I was even more surprised when it started walking towards me with tail fanned and making clicking noises. As I didn't move (too busy taking photos and being generally flabbergasted) it took its display up a level and started whacking me around the legs with its wings. I hurried on and was effectively chased off suffering a few pecks along the way. I later discovered large bruises behind each knee. After breakfast we checked pout of our hotel in Kuusamo and returned to Valtavaara.  We walked around in two hours but it was exceptionally quiet. We headed southwest to Oulu, Megan doing most of the driving as a succession of early starts had caught up with me. In Oulu we 'collected' the key to our apartment and wandered around town. I had to be at the Liminka wildlife centre at 03:00 the following morning for my pre-booked owl trip and as it was a 30 minute drive. I wasn't certain how easy it would be to find (very as it turned out) and I decided to spend the night in the car there. I left Oulu at 19:45 and walked out to a hide overlooking a bay where I spent 90 minutes seeing 4 distant Common Cranes, 3 White-tailed Eagles, a male Garganey, 15 adult Little Gulls and a singing but not scarlet Common Rosefinch. I returned to the car, set my alarm for 02:45 and made myself comfortable across the back seat. 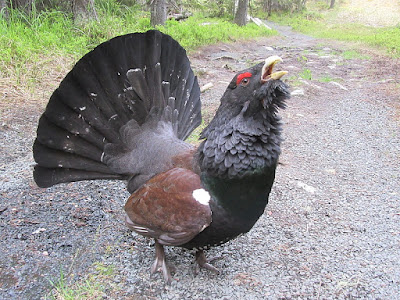 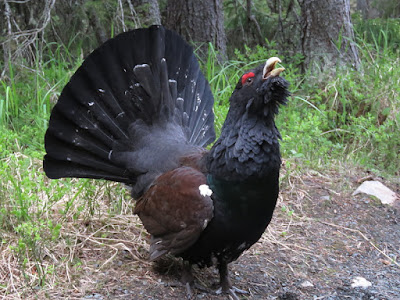 Tuesday 31 May. As 03:00 approached I gathered in the car park with two couples (English and American), a father and grown up son from Northumberland. Our guide Taru arrived in an eight-seater van, she outlined our programme and we were off.  After a half hour or so of driving we reached an area of woodland where a female Pygmy Owl was in a nest box. The previous day Taru had found the male sitting nearby but he was unreliable and there was no sign today. We all had a quick look in the box and continued on to the next site to look for Three-toed Woodpecker in a small wood. This was a feeding area rather than a nest-site but it seemed it was elsewhere. A short drive down rough tracks took us to an area where a Hazel Hen had been seen the previous day in response to a whistle but it didn't show either. We walked down a narrow trail to a Black Woodpecker nest site - a large hole in the trunk of a tree about 5 metres above the ground. After a while of seeing a beak and sometimes two in the back of the hole a male flew in. Another drive took us to a more open area where two young Ural Owls had just fledged. the previous day they were still close to the nestbox and readily found by Taru.  Today she heard them calling more distantly but on our way towards them we saw both adults well and felt it was est to leave them unseen.  Unfortunately there were no knows Tengmalm's Owls in nestboxes within two hours drive of Oulu and the nearest was very unreliable so they were not on the agenda. That left Great Grey Owl, one of the birds that really caught my eye in my first ever field guide in the late 1960s. I'd wanted to see one pretty much ever since and Taru was confident. We drove to the site, an old Goshawk nest well into a patch of forest. It was a poor year as the vole population had crashed. The previous year Finnature had found 16 Great Grey Owl nests in the Oulu area and this year the one we were heading for was the only one. It had only been found three weeks earlier when the goshawk nest had been checked. On the way to the nest tree we were distracted by a singing Greenish Warbler although it didn't give good views - I missed it completely, my mind elsewhere. Taru then became slightly lost which didn't do my nerves any good but she had GPS and soon realised she had overshot the tree. We watched the owl sat on its nest for the best part of an hour before we had to drag ourselves away. It was huge and I was not disappointed.  We returned to Liminka just before 13:00. I phoned Megan who had been looking around museums in Oulu and agreed I would head straight back. we had an easy afternoon in the apartment and wandering around. Later we walked a sculpture trail. 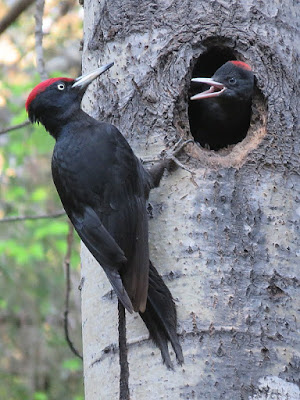 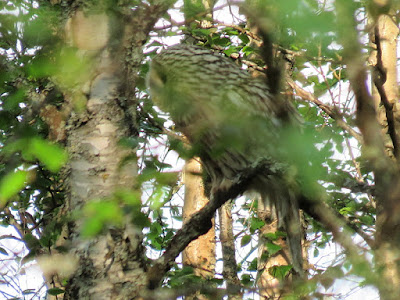 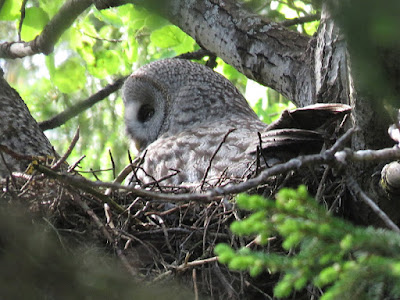 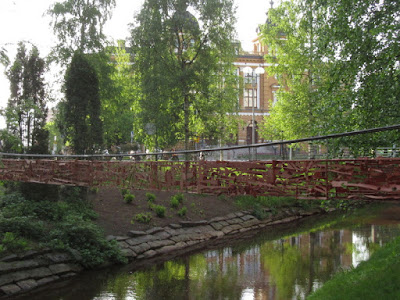 Wednesday 1 June. We walked to the waterfront after breakfast, left the apartment and returned the car, an almost new Peugeot 308, to Oulu airport. We had driven almost 3000km in 10 days and it had served us very well. Our flight to Helsinki was on time and our bags waiting at the carousel.  We caught a very modern train into the city and walked the short distance to our apartment. We were early and no one was around to let us in so I stayed with our bags while Megan walked to the Tourist Office. Once settled in we walked into the city centre, admired some of the sights and visited a supermarket. There was a large area of cut grass by our apartment on which a flock of 40 Barnacle Geese were feeding.
Thursday 2 June.  We walked down to the harbour and caught the 09:00 ferry to Suomenlinna Sea Fortress where we spent most of the day walking around. A Blyth's Reed Warbler as singing from beside a pond and showed well but rather briefly. Barnacle Geese with small goslings were everywhere and several female Eiders with ducklings were offshore too. Back in Helsinki we walked around the lake near our apartment seeing more Barnacle Goose families. 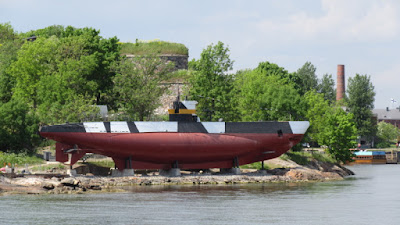 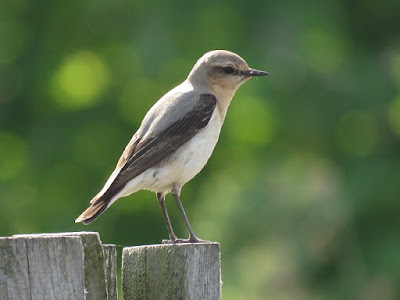 Friday 3 June. We caught a train to Turku where we walked around the city. The train was clean, fast, prompt, uncrowded and half the cost of an equivalent two hour journey in the UK. Turku was hot and the centre rather crowded but there were some nice buildings.


Saturday 4 June.  We walked down to the harbour and along to see the icebreakers.  It was hard to imagine that this part of the Baltic froze in the winter although global warming is having an impact. Opposite the icebreakers a Thrush Nightingale was singing from dense vegetation in a small park but remained unseen. We caught the first ferry to Vallisaari island, adjacent to Suomenlinna it is much wilder and more wooded. we saw a couple of Common Rosefinches, although I failed to get onto the singing male (a scarlet one) that Megan saw. I only heard a Marsh Warbler that was singing from a nettle patch while another Thrush Nightingale was also heard. Back in Helsinki we walked most of a tourist route through the old town and around the lake.
Sunday 5 June. Our last morning. We walked to the Rock Church, it had been closed when we had past the previous day. It was interesting but more like a concert venue, more so as our visit coincided with a large group of Japanese tourists. We walked around the lake again, collected our bags and walked to the station where we caught a train to the airport. our flight home was slightly delayed taking off, a mismatch on the passenger numbers, and nearly three hours later we were back at Gatwick.  It took ages for our bags to arrive, the next train to Shoreham-by-Sea was cancelled due to staff shortages, we caught one to Brighton but the coastway services were delayed or cancelled due to signal failure. Welcome to the Third World at First World + prices.

Posted by richard fairbank at 22:56