This is the second of two posts covering a two week winter trip to Japan with John Cooper, John King and Dave Sargeant. We had arrive din Japan, caught an overnight ferry to Hokkaido and were now flying south to Okinawa ...

Friday 17 January (continued). We landed at Naha, Okinawa after a three hours flight from Chitose. About 2250 km from almost the north of Japan to a few islands short of the south. We made straight for Avis where it took a while to find a car with working GPS that also accommodated our bags. We headed through town to the expressway passing an estuary with a few waders and what appeared to be a Black-faced Spoonbill. An optimistic call perhaps and frustratingly there was nowhere to stop to be sure. We headed north for 2.5 hours arriving at Fungawa Dam just before dusk. On the journey we saw several Grey-faced Buzzards and Ospreys, 8 Pale Thrushes and a male Daurian Redstart. Neither the hoped for Okinawa Rail nor any owls were calling around the dam and soon after dark we headed back to the west coast to find the Okuma Resort Hotel where we were staying. It looked rather posh although we never saw it in daylight and so was unnecessarily so although it was well located for the area we wanted to go birding. We ate in the hotel at the ‘western’/Chinese buffet. It wasn’t overly special but I managed to find something.

Saturday 18 January. We were up early and were back at the Fungawa Dam at 06:00. We heard an Okinawa Rail call nearby seemingly from a moderately isolated tree beside the road but it did not call again and we were unable to locate it with spotlights. Very frustrating. At first light (07:00) we started down the ‘US Marine track’ at km 8.6. At dawn a woodcock flew over, presumably Eurasian but Amami was a possibility. I then saw a smallish owl which briefly landed in a tree appearing short-tailed. I assumed it was a Scops but I’m not sure it was that small? Much more satisfactory were Ryukyu Robins and we saw several hopping around the edges of the track. They were one of my main targets for the trip and absolutely superb. We spent three hours on the US Marine track hoping an Okinawa Rail would cross our path but one didn’t. We had no luck with Okinawa Woodpecker either and decided to return to the Fungawa Dam but the area was now disturbed by noisy construction work. We tried another track at km 7.6 (the ‘woodpecker road’) which went through decent looking forest for about 1km before entering a more open area where we turned around. It was very quiet and we were almost back at the car when we saw a pair of Okinawa Woodpeckers in nearby trees although they were not easy to see well. We revisited the US Marine track as it had looked promising for the rail. We spent the rest of the day there, walking quietly and sitting watching sections of the track but all to no avail. We were out until well after dark but nothing was calling and we reluctantly returned to our hotel and another buffet. It had been a good day despite no rail. I had seen Japanese Sparrowhawk, 2 Japanese Wood Pigeons, 3 Ryukyu Green Pigeons, Japanese Pygmy Woodpecker, 2 Ryukyu Minivets, 8 superb Ryukyu Robins, 4 Red-flanked Bluetails, 4 Japanese Bush Warblers and 10 Varied Tits and was definitely starting to feel better.


Sunday 19 January. We left the Okuma Resort Hotel at around 05:00 and were back in Naha by 07:00. We spent a couple of hours looking for Saunder’s Gull and Black-faced Spoonbill on the local estuary but without success. A local birder told that both were in the area but couldn’t suggest where might be best to look. We suspected that the tide was wrong and the best we managed were 8 Long-toed Stints, a Grey-tailed Tatler, 5 Avocets, 2 Band-tailed Gulls and 2 Blue Rock Thrushes. We returned to the airport, dropped off the car and caught the 11:30 flight to Amami-oshima.  We arrived on time and were met by the owner of the Caretta House Hotel where we would be staying. They also arranged our car which unfortunately had no Sat-Nav although we were provided with a map, in Japanese. The Amami Natural Forest, on a range of hills near to where we were staying, was recommended to us as a good place to find birds and we headed straight there, seeing 3 Lidth’s Jays from the approach road. A good recommendation which became even better when walking the trails around the centre produced the distinctive endemic races of White-backed Woodpecker and Ryukyu Robin and a superb Asian Stubtail. Despite cold and windy weather we also saw Japanese Wood Pigeon, Ryukyu Green Pigeon, 30 Pale and 3 Dusky Thrushes, 2 Daurian Redstarts, 2 Varied Tits and 3 Black-faced Buntings. We returned to the hotel by 18:00 where we were ‘treated’ to a cook-your-own meal consisting of a pile of raw stuff and a hot-plate. None of us were overly impressed although we felt the hotel had been well meaning. It was just a clash of cultures beyond me and I ate a few raw vegetables. After our meal we returned to the Amami Natural Forest and tried for owls but heard nothing. Perhaps it was not surprising as the weather had not improved. 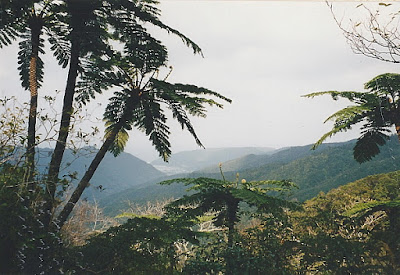 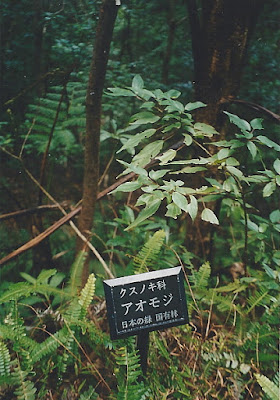 Monday 20 January. We left the hotel at 05:30 to drive to the Supa-rindo track and the Kinsakabaru Virgin Forest, the main birding site on Amami. A combination of the directions in Mark Brazil’s bird finding guide and signs to the virgin forest got us there although at times we started to wonder if we were going the right way. The site guide wasn’t very specific about distances and we were surprised that the journey took an hour and a half and we arrived just as it was getting light. We had seen or heard no owls, or anything. Not even an Amami Black Rabbit. Soon after dawn a woodcock flew over but I missed it. We spent all day walking, sometimes splitting into pairs to cover more ground, and driving forested tracks but it was very quiet despite the forest looking superb. We saw nothing we hadn’t already encountered on the trip and I recorded just 17 species. Not a great return for 14 hours birding. I saw 4 Grey-facedd Buzzards, Ryukyu Green Pigeon, 2 Japanese Pygmy Woodpeckers, 2 Ryukyu Minivets, 4 Red-flanked Bluetails, 110 Pale Thrushes, 2 Asian Stubtails, 8 Japanese Bush Warbler, Yellow-browed Warbler, 6 Varied Tits and Black-faced Bunting and heard a Lidth’s Jay. We were hoping to find the endemic Amami Thrush, although if we had it might have been difficult to identify and eliminate a wintering White’s. Disappointed, the day was probably the low point of the trip, we returned to the Caretta House by 20:00 and had a better more western style meal.


Tuesday 21 January. Our final morning on Amami and we decided after the disappointment of the Kinsakabaru Virgin Forest to return to the Amami Native Forest at first light. It was much closer to where we were staying and also nearer to the airport from where we would depart at noon. We had excellent views of 3 Ryukyu Robins and 4 Lidth’s Jay and also saw Japanese Sparrowhawk, 5 Japanese Wood Pigeons, Ryukyu Green Pigeon, owstoni White-backed Woodpecker, 5 Dusky and 25 Pale Thrushes and 2 Red-flanked Bluetails. The robins, two males and a female, were feeding in a ditch at the edge of the car park. We left at 09:00 and stopped briefly at a pond at the bottom of the hill where we saw a flock of about 35 Bramblings. We found a Richard’;s Pipit on the coast and a Brown Booby offshore, our first trip birds for a couple of days. We dropped off the car at the airport and caught the 12:00 flight to Kagoshima on Kyushu. It was on time.

Posted by richard fairbank at 20:03