the end of autumn (27 October-7 November)

Tuesday 7 November. I took Cookie to Shoreham Harbour and Widewater. At the former a single Brent Goose flew west and a Rock Pipit was in the car park. At the latter were 5 Little Egrets and most of the Mute Swan family (one adult and the four youngsters) flew off east as I arrived but were soon back. Perhaps the young were being encouraged to spread their wings a bit.

Sunday 5 November. Mill Hill with Cookie was quiet with the 2 Stonechats, 8 Song Thrushes and 9 Linnets. We then went to Pulborough where I quickly saw the Pectoral Sandpiper from West Mead Hide before joining Megan in the woods. Some shooting nearby made Cookie very anxious so we gave up. A shame as the falling leaves were nice in the sunshine. Later 10 Collared Doves were lined up on our fence and a visit to the Adur produced another 2 Stonechats. Only Black-headed Gulls were present in any numbers as the tide wasn't that low.
Saturday 4 November. Mill Hill with Cookie was quiet with a Redwing, 6 Meadow Pipits and 15 Goldfinches. Later we walked around the houseboats seeing what was presumably the returning Greenshank.

Friday 3 November. A family trip to Crowlink with Megan, Vanessa, Ruth and Cookie. I saw 8 Stonechats, 195 Goldfinches and a Corn Bunting during our walk to the sea, along half the sisters to Birling and back via Belle Tout Wood (where 150 Wood Pigeons flew over). It was nice to see John and Doreen Cooper but other than a couple of Dartford Warblers they'd not seen anything different. Very quiet indeed for diurnal passage despite some impressive counts inland. I couldn't pick anything interesting out of the gulls during a late visit to the Adur at low tide although 10 Dunlin were present.

Wednesday 1 November. Mill Hill with Cookie was quiet with a Sparrowhawk, 2 Stonechats and 15 Goldfinches. Later a visit to the Adur at low tide produced a colour-ringed Herring Gull, 4 Grey Plover and 2 Dunlin. 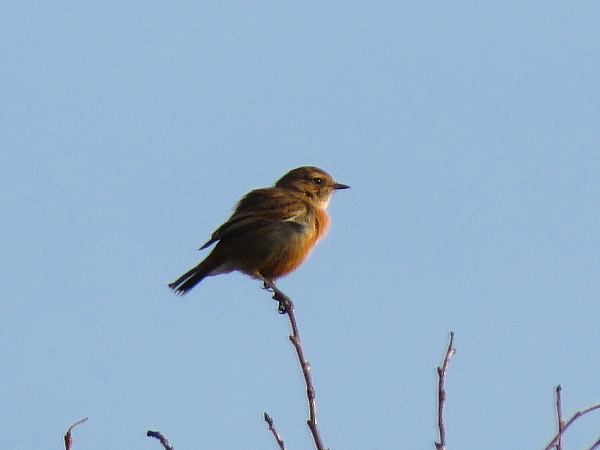 Tuesday 31 October. A charm of 10 Goldfinches were feeding in thistles near Southwick Power Station as I cycled to work.

Sunday 29 October. A visit to Beachy with John King was like most this autumn, a disappointment. I saw 2 Peregrines, 2 Swallows, 4 Rock Pipits, a Dartford Warbler, 4 Goldcrests, 95 Goldfinches and 12 Redpolls, my first for the year. Despite much looking in likely areas we failed to find any Ring Ouzels and I finished the autumn on just 2.

Saturday 28 October. Mill Hill with Cookie produced 14 Stock Doves and 390 Wood Pigeons flying west, 8 Song and 2 Mistle Thrushes, 5 Goldcrests and a Siskin heard. Megan and I then took Cookie to Rewell Woods but not being prepared to wait for any length of time failed to see any Hawfinches.  We did see a Firecrest on our walk round which was nice.
Friday 27 October. Megan and I took Cookie to Cissbury seeing 6 Stock Doves and 200 Wood Pigeons flying west, 3 Stonechats and single Redwing, Ring Ouzel, Goldcrest and Reed Bunting.

Posted by richard fairbank at 12:03