This is the first of several blogs giving my perspective of a birding trip to Bolivia. It had been organised by Jon Hornbuckle long before his accident and came about after a meeting between Rod Martins and Barry Walker at the Birdfair in 2015. I had known Barry from the British twitching scene in the late 1970s and birded the Central Highway with him during an eventful trip to Peru in 1984 (see http://birdingneversleeps.blogspot.co.uk/2012/10/1984-eventful-peru-part-1.html). For reasions given in an earlier post neither Jon or Rod were able to make it. Those that did were Marc Brew, Duncan Brooks, Brian Foster and Malcolm Oxlade, all of who I'd been on 'Jon trips' with before, Paul Noakes (my last trip with Paul had been in 1991, see http://birdingneversleeps.blogspot.co.uk/2013/02/south-africa-august-1991-part-1-cape.html) and Mike Catsis. Barry came along for the first and last parts of the trip and arranged, through his Manu Expeditions, the logistics and Richard Amable as a guide. After a long flight including a 17 hour lay-over in Bogota, Brian, Duncan and I arrived in La Paz ... All images taken by me unless otherwise stated, most with a Canon SX60 and a few with an i-phone 6.

9 November 2017. Brian, Duncan and I arrived in La Paz’s El Alto airport at 03:50 and immediately noticed the altitude when climbing the stairs to immigration. We were quickly admitted and collected our bags. The Cambio was open and I changed $500, much more than I was expecting to need but the rate differential was very small so I wouldn’t lose much changing any surplus back. We then had the choice of finding a quiet bench to sleep on or investigating the ‘on-site’ SleepBox Hotel. It wasn’t as cold as I was expecting and the benches looked sort of inviting but I was a bit concerned of sleeping very solidly and not noticing someone walking off with my bag. Brian and Duncan were keen on the SleepBox so I went along and slept reasonably well for four hours in my expensive hot cramped cell. I wandered outside for some fresh air seeing Rufous-collared Sparrows and Chiguanco Thrush. Marc, Mike and Paul arrived with Barry and our Peruvian guide Richard and we checked in for the Riberalta flight. It was a BAe Avro RJ85 operated by Ecojet. There is something reassuring about flying in a plane with four engines. It was the first time I had seen Barry since birding with him in Peru in 1984, we also knew each other from twitching and visits to Scillies from the mid-1970s. It would be nice to think we'd not changed a bit but age comes to us all although Barry was as outgoing and confident as I remembered him. We took off and were almost immediately over La Paz, most of the city spectacularly in a deep valley below El Alto. We stopped at Cochabamba and Trinidad before landing an hour or so late at Riberalta. We were met at the airport by our local guide Vincent with two 4WDs but it soon became apparent that out bags hadn’t been put on the plane. Apparently a heavy generator had taken priority although it would have been nice to know beforehand to have rescued a few essential items. We were driven to the rather nice Hotel Colonial to dump what little stuff we had and headed out to Hamburgo, an area of secondary forest on the edge of town. This was the closest site Vincent knew for our main target Masked Antpitta and we only had a couple of hours of light left. It took a while for a bird to respond to playback but it eventually did giving several brief views before performing for everyone as the light started to fade - just as well as I’d missed the first 2-3 views. As well as the antpitta I saw a smart male Great Antshrike and Rufous-tailed Jacamar. We returned to Hotel Colonial and Vincent took us to some second-hand clothing shops where I bought a cap for $1, resisting an equally cheap shirt in the hope/expectation of being reunited with my luggage the following day. Having seen the antpitta meant we didn’t need to be back at Hamburgo at dawn allowing us to travel further afield the following day. 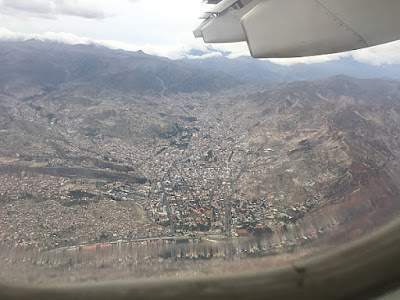 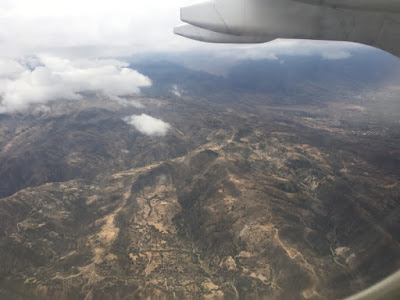 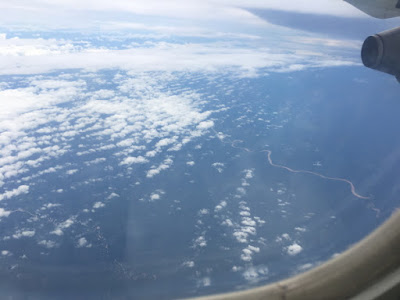 10 November 2017. We were up in the dark, jetlag working in our favour, had a basic breakfast and were on our way out of town at dawn. We headed NE on the road to the Brazilian border and soon appeared to be going through reasonable habitat. We continued for some distance before turning off onto a dirt road to the east into more open cerrado. We made a couple of roadside stops seeing amongst others White-eared Puffbird, White Woodpecker and White-rumped Tanagers. Barry’s knowledge of bird calls was very impressive with him putting names to even the shortest or most distant calls, several I couldn’t hear at all but my ears are now quite poor. The downside of Barry’s expertise was that if I can’t see a new bird I’d rather not know it was calling at me! We continued on the road to San Lorenzo, stopping a km or so past a ‘checkpoint’ consisting of a rope across the road. Here Paul found in quick succession Rufous-sided Pygmy-Tyrant and Horned Sungem. We saw two of latter but sadly neither were adult males although they were stunning nonetheless. We continued for several kms to an area of gallery forest by a small stream. It was rather quiet although a superb Short-tailed Pygmy-Tyrant was a bird I’d wanted to see for many years. By now it was late morning and activity had dropped right off. After a bit of discussion and advice from Vincent we decided to head for a small village near the Brazilian border where we could find some lunch and then bird a forest trail we had passed on the way out that morning that Paul had read about. On the way back to the main road a Chaco Eagle was seen sat in the top of a dead tree, an unexpected bonus. We found the village where a couple of women has set up a temporary transport café in a covered picnic area. Our excellent chicken and rice lunch being interrupted when we realised the parakeets flying around behind us were Tuis. We headed back towards Riberalta stopping at km 632.5, Paul’s site). It looked good habitat but rather quiet, a male Natterer’s Slaty Antshrike our most notable sighting. Perhaps it would have been better to have been there first thing? With the light starting to fade we left but half-way back to Riberalta were stopped at a police checkpoint. It seemed the driver of our second vehicle only had a motorbike licence. A fine/backhander was paid to avoid further problems. While this was happening at least 40 Lesser Nighthawks left their roost and flew over. Back at the Hotel Colonial our bags were waiting for us, all but Richard’s. He would have to visit the airline office in the morning to collect it. 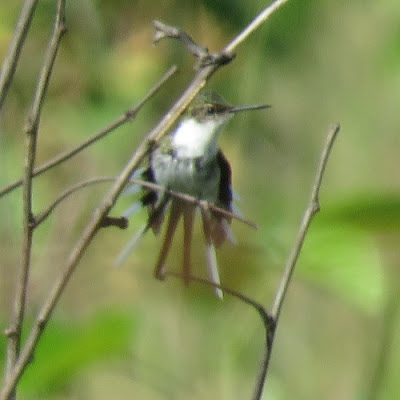 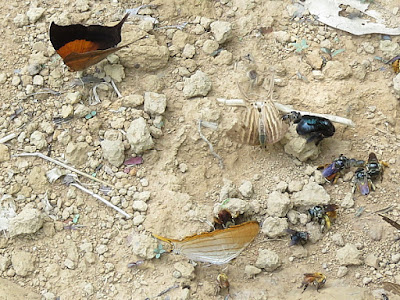 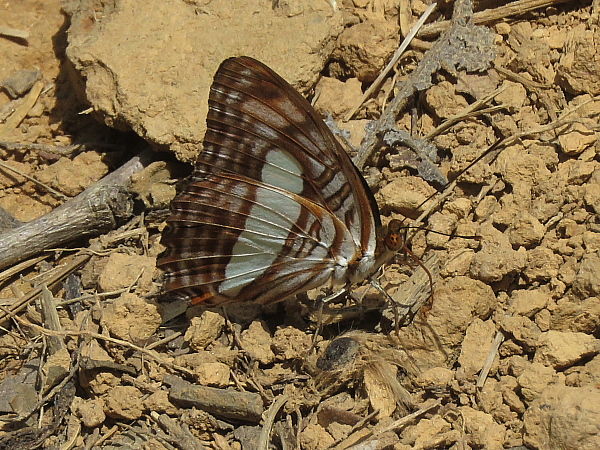 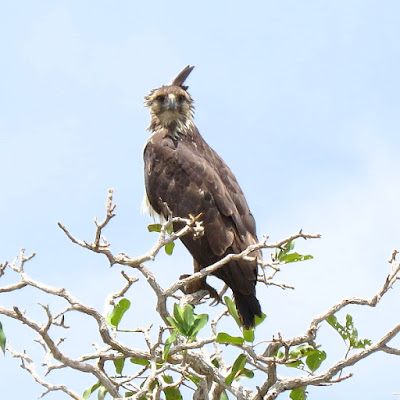 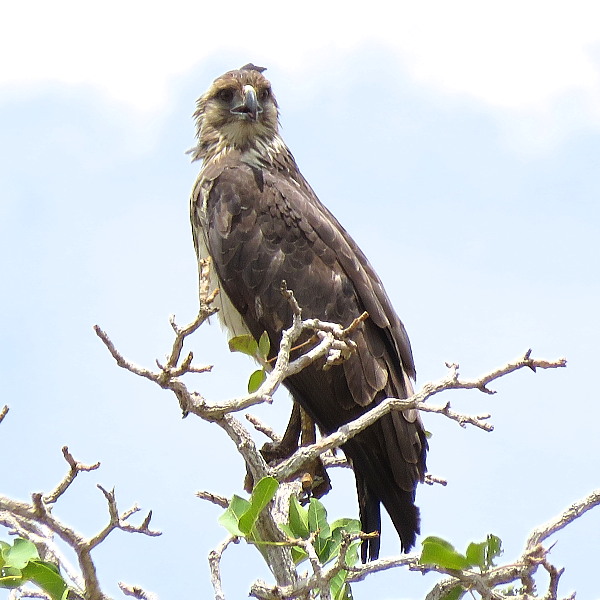 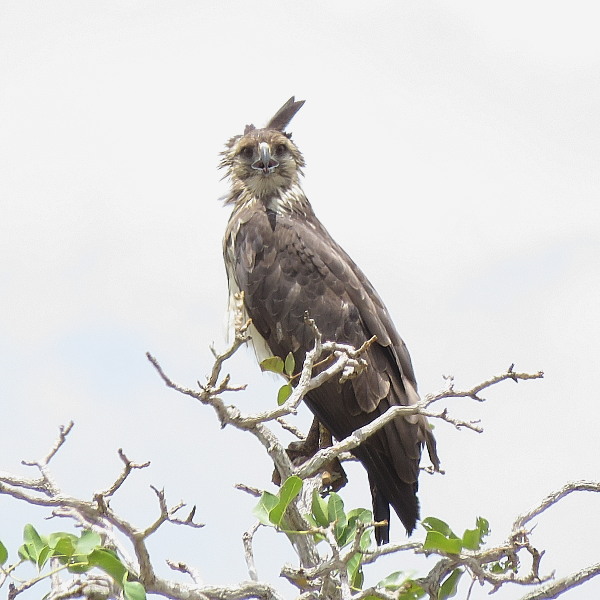 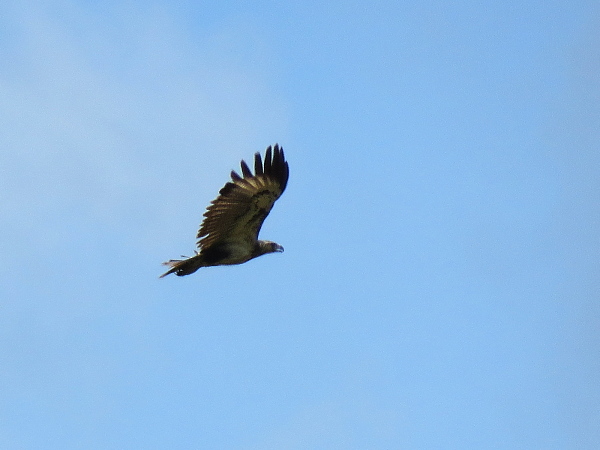 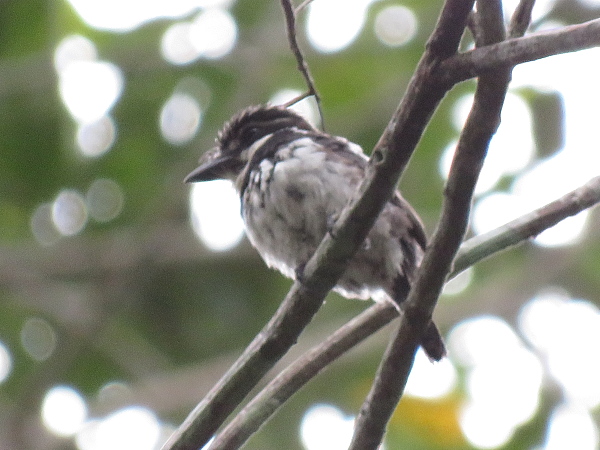 11 November 2017. Another early breakfast although we left after first light arriving at the Hamburgo trail at 06:00. We tried for the Masked Antpitta again with most seeing/glimpsing it - my views were unidentifiable. We continued along the trail where we spent all morning. It was quite birdy despite being very hot, there were also many mosquitos and other insects. A wary Long-billed Woodcreeper gave me a reasonable flight view with the decidedly less impressive Johannes’s Tody-Tyrant my only other new bird. Other decent birds seen included Grey-cowled Wood Rail, Hoatzin, Ferruginous Pygmy Owl, Purus Jacamar, Black-throated Antbird, two more Short-tailed Pygmy-Tyrants and Bare-necked Fruitcrow. Barry had come along the trail at a slower pace than us and we met him on our return. He’d sat on a long for a while and had excellent views of two antpittas and also seen a Riparian Antbird nest building. It was a bird we hadn’t seen and this sounded like a stake-out, or would have been if he could have remembered where it was. Shame. Back at the road most of the group opted to return to the hotel and Richard had to visit the airline office but Paul and I and the second vehicle stayed out for another hour. I was keen to see the antpitta again and Paul to photograph it. We followed Barry’s directions and heard what we thought was the antpitta responding to playback but after some creeping around discovered the calls we’d heard were a pair of Amazonian Antshrikes. Nice to see, especially the female, and a new bird for Paul. We gave up on that bird and returned to the original area where Paul recorded what to me was a similar call but he detected a slight difference and after a couple of minutes an antpitta flew in to check us out. It took me a while to get onto it but fortunately it didn’t move and I even managed some grainy images. A superb bird and we returned for lunch very satisfied. After lunch and an hour or so of packing, in hindsight a trip to the main square with Paul to look for Spotted Tody-Flycatcher would have been more productive even though I’d seen them before. We were taken to the airport, where a superb male Long-winged Harrier and 3 Buff-breasted Sandpipers were a surprise. After checking in we kept a close eye on our bags to make sure they were loaded. We arrived at Trinidad on time and with our luggage. Three 4WDs were there to meet us with our local guide and Blue-throated Macaw expert Jose. We had an hour or so of light and tried a short diversion to look for Plain Softtail. We had no success but did see Blue & Yellow Macaw and Grey-crested Chacalote. We soon gave up and headed for our lakeside hotel on the edge of town. The main road was closed for a visiting politician so we took to back roads but some heavy rains made one section almost impassable. We arrived at Hotel Tapacare and met the remaining member of our group Malcolm there just as it was getting dark. I skipped the evening meal which judging by everyone else’s comments was a good move. 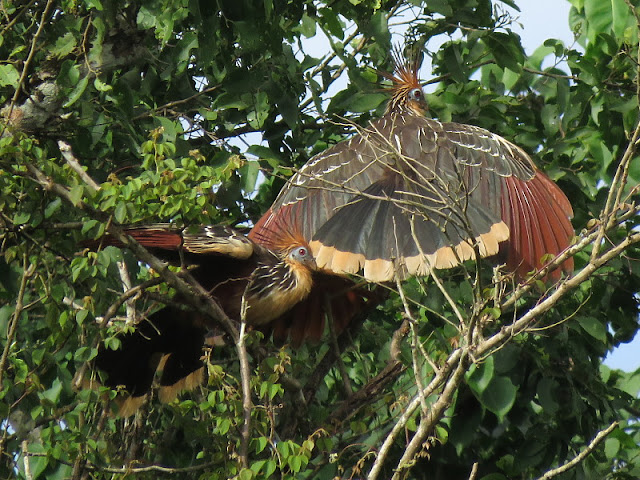 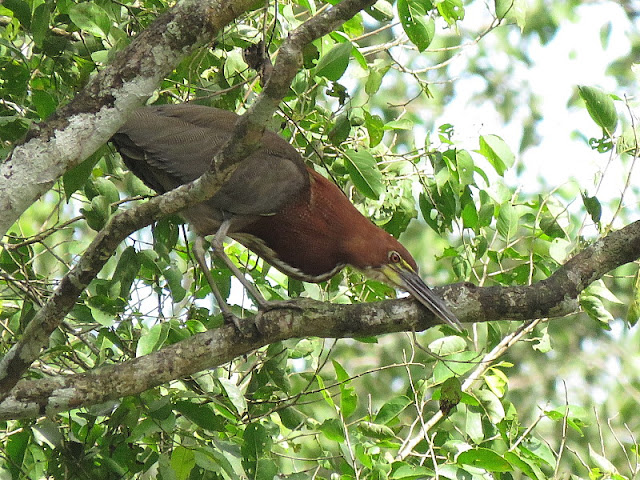 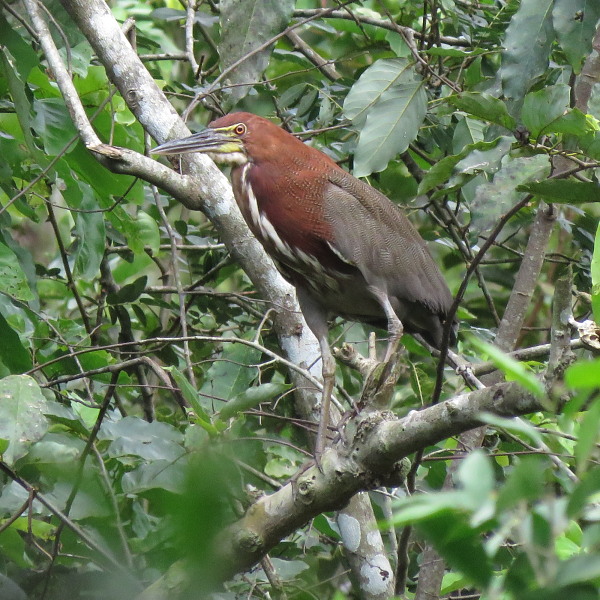 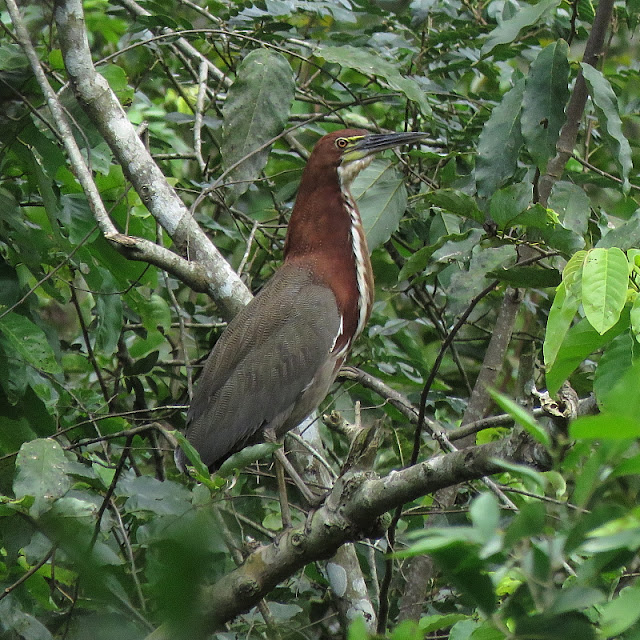 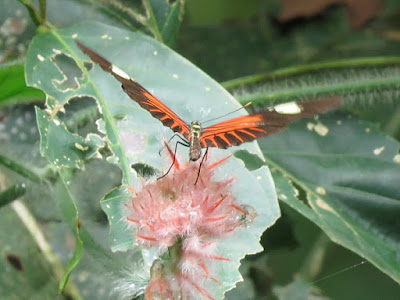 Posted by richard fairbank at 17:44