This is the second of three posts covering a return trip to Madagascar with Nick Preston. We'd had a very successful four days in the dry spiny forest of the South West and were being driven up to Ranomafana. The forest there was darker (and wetter) testing my bridge camera's capabilities to the limit.

Tuesday 9 October 2018. An hour around the Rock Lodge from dawn produced good views, in poor light, of a male Cuckoo Roller in the Oasis. I stayed out looking on the cliffs around there for Benson’s Rock Thrush while Nick returned to the room, finding a male Benson’s on the roof of an adjoining building. How often has that happened! Fortunately it didn’t take long to refind and I had the bonus of seeing a female too. We kicked around an area of grassland near the museum hoping to flush a partridge without success and then commenced a long day in the vehicle, most of it for me with toothache. Our excellent driver Maurice stopped about 23km south of Ihosy and suggested we check a nearby shallow valley as he’d stopped there to look for Madagascan Harrier with other groups. We duly did and scanned without seeing anything until walking back to the vehicle a harrier came in and almost flew over us. We stopped at Anja Community Reserve and took a quick guided tour seeing Ring-tailed Lemurs, Oustalet’s Chameleon and a fine Forest Rock Thrush. Maurice found me a pharmacy in Fianarantosa where I stocked up on pain-killers and we continued on to Ranomafana arriving at Hotel La Grenat at dusk in low cloud and heavy rain with a sense of déjà vu. We met Jean Chris who was to be our guide while we were at Ranomafana, except he was booked with another group for the next day and had arranged for his son and a 'spotter' to take us out. He seemed somewhat dismayed when we told him our main target was Yellow-bellied Sunbird-Asity and suggested that although they had been easy to find two years ago they were now very difficult. We weren’t sure how reliable this information was but like the weather it somewhat dampened our mood. 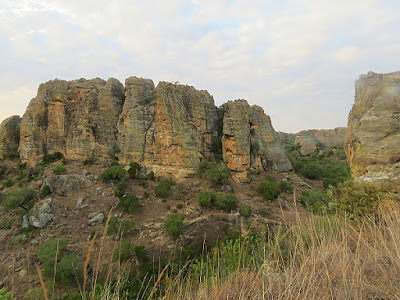 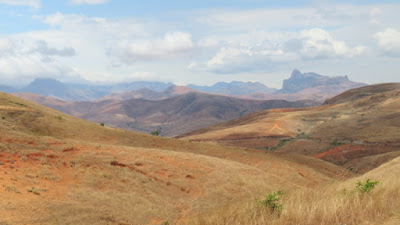 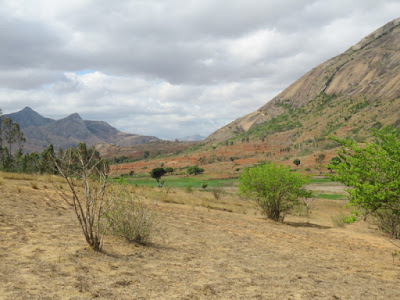 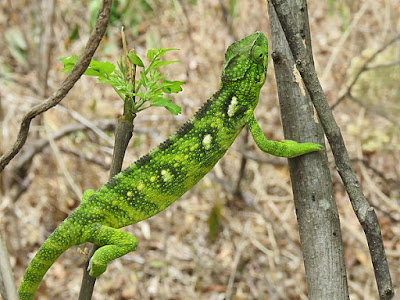 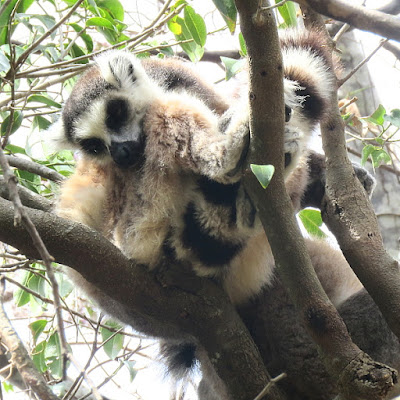 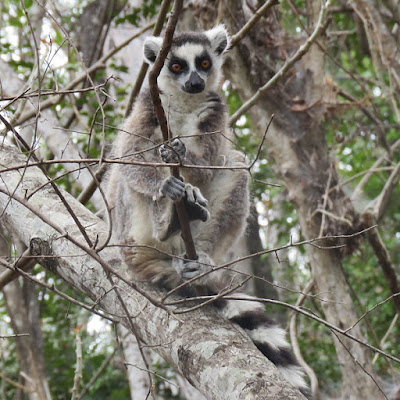 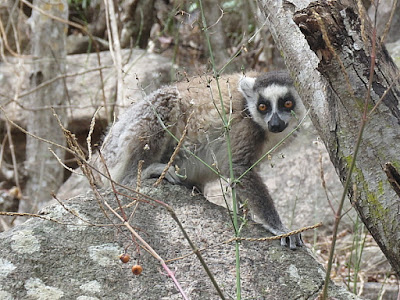 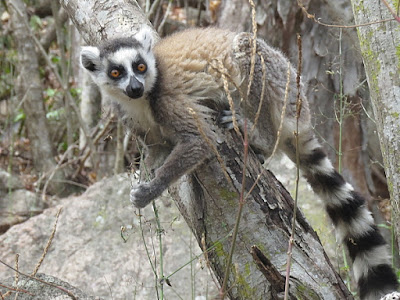 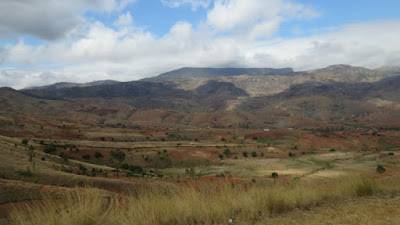 Wednesday 10 October 2018. We had breakfast at 05:30 and departed at 06:00 driving up to Vohiparara where we spent all our time along the ridges in dull but not unreasonable weather. Our guide Derek and his spotted kept disappearing to look for flowering trees where Yellow-bellied Sunbird-Asities might be feeding but each time came back without finding any. We had been expecting a (long) wait watching a patch of flowers for the birds to eventually visit so not even finding any flowers was a big blow. Perhaps the talk of them having become really hard to find wasn’t just to reduce our expectations? Sitting waiting while our guides went to look for flowers is not how Nick and I like to bird and we found it all very frustrating. My having toothache all day, with periods of some relief when pain –killers kicked in wasn’t helping although we did have good views of a pair of Rufous-headed Ground Rollers and a Madagascan Cuckoo. The latter was a new bird as we had been too early in 1995 and they hadn't then returned from Africa for the breeding season. As it turned out it was the cuckoo I saw although we were to hear them almost every day from this point on. Mid-afternoon we returned to the headquarters to look for Crossley's Vanga on trails the other side of the river. On the way down to the bridge, which we well remembered from our earlier visit, we were shown a large deep hole in the bank right by the trail. It was an old Pitta-like Ground Roller nest burrow and two bends further down one showed well in a small dark ravine. Once over the bridge Derek trawled for Crossley’s Vanga along several trails whereas we had hoped they knew a particular area to find them. We had no success and saw next to nothing else while doing so. The day’s Ground Rollers had been very nice, and as good as I had remembered, but otherwise we had seen disappointingly few birds with nothing being responsive. With continuing toothache I again had two soups for dinner. 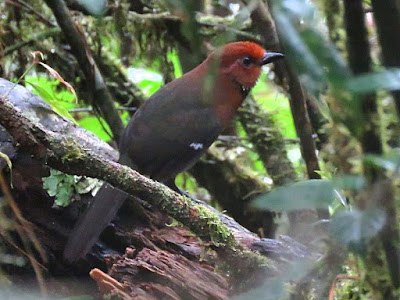 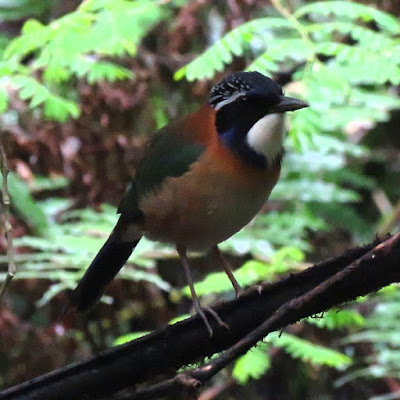 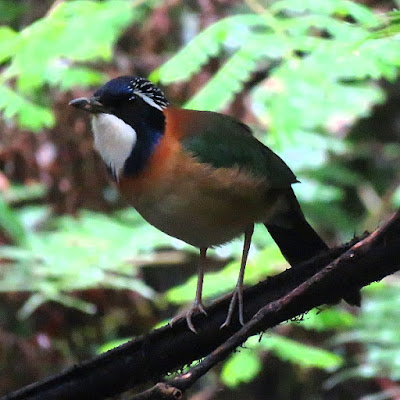 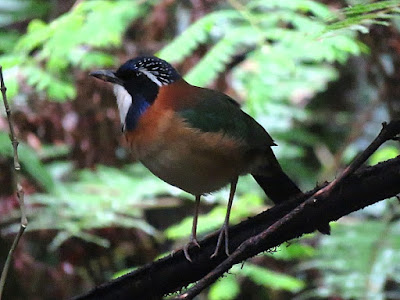 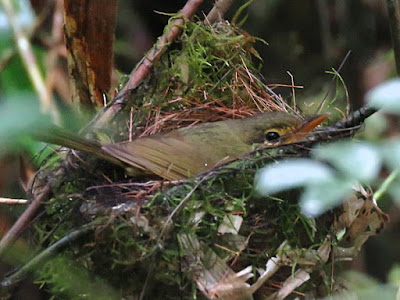 Thursday 11 October 2018. Another day walking along the ridge trails at Vohiparara with Jean Chris hoping a Yellow-bellied Sunbird Asity might appear. Nothing from 07:00-15:00 in indifferent weather. We reluctantly accepted that they are no longer in the area - as Jean Chris told us when we first met him. We had to try though. While looking we saw Blue Coua, Cuckoo Roller, Blue Vanga, Dark Newtonia, White-throated Oxylabes and Cryptic Warbler. At 15:00 we returned to the road and Maurice drove us up to a track that, after a brisk 15-20 minute walk, led to a marshy area. Here we saw Grey Emutail and 2 Meller’s Duck flew over. The latter was anew bird although my views were little more than silhouettes. It had been a more enjoyable day despite miserable weather and continuing toothache. Two soups again for dinner. 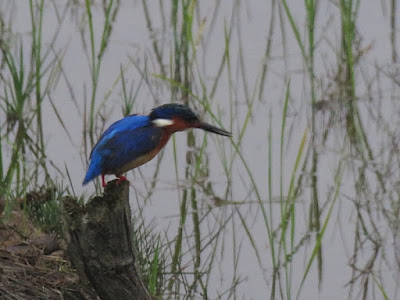 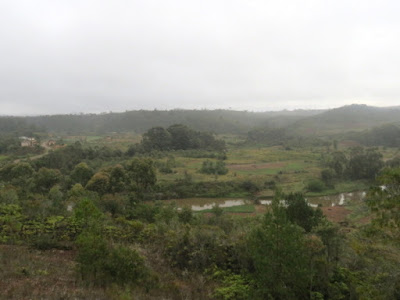 Friday 12 October 2018. We were due to leave at 05:00 but Maurice didn’t appear until 05:15, the first time he’d been late. Hotel staff were up and handed over a packed breakfast – a cheese sandwich I was able to eat without troubling my teeth much, a good sign. We returned to Vohiparara with Jean Chris but he only had a couple of hours with us as he had a hospital appointment in town. We also had a long way to drive. With our lack of success along the ridges and little time to spend there if we went we birder along a lower trail supposedly very good for Yellow-brow and Wedge-tailed Jery. We birded along it until at 07:15 Jean Chris became a little agitated and had to hurry back for his appointment. We wished him well. We had agreed with Maurice to be back at the road by 10:00 and so continued along the trail a short way. I decided to continue further while Nick slowly walked back. Neither of us found a Yellow-brow but just as I was about to turn back I did briefly get onto a Wedge-tailed Jery as it followed a small bird flock. Otherwise we saw Cuckoo Roller, Velvet Asity, Common Sunbird Asity, Pollen’s Vanga, Long-billed Bernieria, Spectacled and Grey-headed Tetraka and Forest Fody. Back at the road Maurice was 15 minutes late having taken Jean Chris to the hospital. It was then a 6.5 hour drive to Andrisabe despite being only 200km. The roads were poor in places but although potholed a great improvement on the dirt roads of our previous visit. There were some winding roads, busy towns and villages where parked vehicles made it single file traffic only and lots of large lorries. One town en route was completely grid locked as a lorry had either broken down or had a minor accident. Being in a smaller vehicle we just sneaked through with much use of the horn. If I’d been driving we would likely still be stuck there now. We briefly stopped at a heronry on the edge of one town seeing our first dark morph Dimorphic Egrets of the trip. We saw a number of Madagascan Stonechats on the journey but little else of note. Despite being in the car for much of the day, and little to take my mind off my teeth I hadn’t felt the need of any painkillers and my bad tooth seemed improved provided I ate around it. We drove through Antsirabe and arrived at the pleasant Hotel Cristal on the far edge of town as the light began to fade. 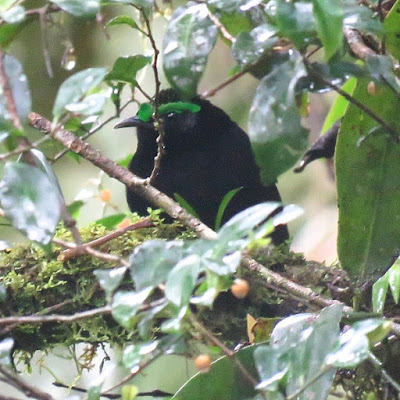 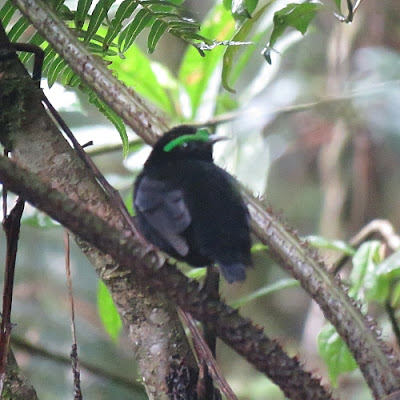 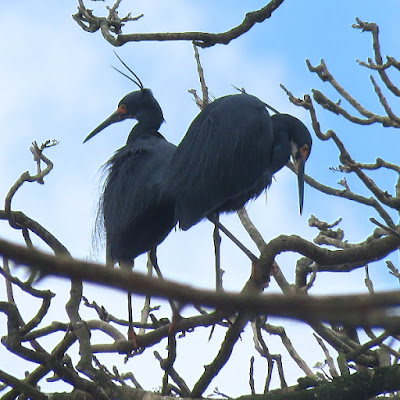 Saturday 13 October 2018. We were given a massive breakfast at 05:30. It would have kept me going all day if my teeth could have hoped with it but I did quite well with them improved to 85-90%. We left just after 06:00 and Maurice drove us to the Antananarivo ring road where we transferred into Jermaine’s Toyota Landcruiser. The journey from Antsirabe had been very slow and almost birdless with narrow potholed roads and traffic ranging from container lorries, some with trailers, to bicycle rickshaws and Zebu carts. We were sorry to see Maurice leave as he’d been an excellent driver and a lot of fun but his vehicle wasn’t up to the roads we’d need to use to reach some of the forest around Perinet. Once clear of Antananarivo the road improved but traffic was bad and a couple of towns were almost at a standstill due to electioneering for the November Presidential Elections. Jermaine told us there were 36 candidates and we had the misfortune to be caught up with the free distribution of ‘T’ shirts for a couple of them. During the journey we probably saw posters for at least half the candidates although few looked overly trustworthy. It was all propaganda as far as Jermaine was concerned. Finally we arrived at Perinet at about 14:00

Posted by richard fairbank at 13:58