This is the final blog recounting a private trip the late and greatly missed Jon Hornbuckle arranged to Papua New Guinea in summer 2006. Jon, Nick Preston and I were staying on after the trip, Jon to lead a Naturetrek group and Nick and I to visit Manus. This account is based on my rather inadequate notes and sometimes vague memories enhanced by Nick. The photos are mostly Nick’s too.

15 August 2006. Jon, Nick and I were back at the airport to meet the Naturtrek group before returning to the Granville Motel to allow them to drop bags and have a quick pit stop. We then drove to Varirata seeing a male and two female Raggiana Birds of Paradise at the lek. It was a bit late and not much was happening. We returned to the main clearing where Yellow-billed and Brown-headed Paradise Kingfishers performed but it was otherwise rather quiet. It was a large group and best split so Nick and I were called into action, our hopes of birding on our own had always been a long shot. Nick and I were keen to see how the Chestnut-backed Jewel-Babbler nest was doing so Jon sent half the group with us and took the rest on a different trail. We felt under pressure to find some good birds and the jewel-babblers more than fitted the bill, or would have if we’d seen them but the nest was deserted. The young had been a modest size, was 20 days long enough for them to have fledged? We certainly hoped so. We continued birding along the trail, heard a Chestnut-backed Jewel-Babbler but it frustratingly failed to cross the trail for us. It was really very quiet and we struggled to find much else with two Rusty Mouse Warblers and two brief Wallace’s Fairy Wrens (for some of us) the best we managed. The only consolation for those we were guiding was that Jon’s group fared no better.

16 August 2006. Jon’s group were up early and returned to Varirata. We said our goodbyes, had a leisurely breakfast and made our way to the airport. Our flight to Manus stopped for an hour at Kavieng on New Ireland and hanging around outside the terminal building saw two Hunstein’s Manakins. We landed at Manus an hour later and looked around for the Harbourside Hotel van which we were expecting to meet us. Following Ian Burrow’s advice I’d phoned the Harbourside Hotel in Lorengau when we’d been in Port Moresby to give them our arrival time, make a reservation and ask if their driver Richard would contact Aron Joseph in Rossun Village on our behalf. The van arrived but it didn’tt seem as if we were expected, perhaps the driver wasn’t Richard? At the hotel it seemed our booking hadn’t been passed on which rather set us back. We dumped our bags in a rather posh room (a cheaper one would be available for the following nights) and explained to reception what we wanted. Richard came round and agreed to take us up to Rossun to find Aron. This he did and after asking in the village and at his house we finally tracked him down further up the road. He didn’t seem too pleased that we’d just turned up unannounced but when we explained that it wasn’t intentional and our request had not been passed on by the hotel he seemed to settle down a bit. He agreed to guide us the following morning and made arrangements with Richard. We then birded along the road back towards Lorengau seeing Island Imperial Pigeon, an excellent Meek’s Pygmy Parrot, two far form excellent Manus Friarbirds, three Manus Cuckoo-Shrikes and a Black-headed White-eye. Tomorrow would hopefully be the day ...

17 August 2006. Richard drove us to Rossun where we met Aron and his friend Timothy Kepo. Apparently we might have to go onto Timothy’s property to look for Superb Pitta and of course that meant more access fees. We set off along narrow trails and Aron soon started whistling an imitation of the pitta’s call. We continued in what sometimes appeared to be somewhat haphazard fashion crossing creeks and streams. After almost two hours with no response at all my hopes were sinking towards an all-time low and I was becoming increasingly wound up by Aron’s whistling. I wasn’t sure I could stand three days of it although if that was what it took we’d do it. With such defeatist thoughts running through my mind a bird responded from a little way ahead. We very tensely headed in its direction but the skies opened and we were hit be an intense downpour on the way. What rubbish timing. We sheltered under umbrellas for what seemed an age, but was probably less than thirty minutes, until the storm passed over and the rain drops from the trees lessened. Thankfully the pitta started calling again and it was game on. A tense but thankfully fairly short ‘tape’ duel ensued before we had good views of two birds, presumably a pair, perched and flying 2-4m in the lower canopy. Brilliant and rarely have I been so relieved. We heard back to Rossun. We also saw Variable Kingfisher, Superb Fruit Dove, Admiralty Pied Monarchs, Bismark Golden Whistler and what we assumed were two Mayr’s amongst the smaller White-rumped Swiftlets. We returned to Lorengau and wandered around a rather uninspiring town before returning to Rossun where we’d been invited for an evening meal by Aron’s wife Susan. We then looked around the village for Manus Boobook but didn’t even hear one despite being told they often visited trees in the village early in the evening.
18 August 2006. We were back at Rossun before dawn and heard Manus Boobook but it didn’t show. We had breakfast at Susan’s before wandering back to Lorengau seeing Manus Friarbird on the way. There we arranged a boat trip that afternoon to Rarah, a small wooded island in the bay and within the reef a little more than a km off-shore. It was an easy option to see a couple of small island specialities. Anything more required visiting Tong, over 50km away across open ocean and definitely more adventurous (and expensive) than our faint hearts we were prepared for. It took about 20 minutes to reach Rarah Island and not much longer to walk around it. We soon saw Mackinley’s Cuckoo Dove, Beach Kingfisher, Island Monarch, Rainbow Lorikeet and over 20 Island Imperial Pigeons on the island before we were hit by another ferocious storm. We found a ‘hut’ with a canvas roof to shelter in but the wind picked up so much we feared it might blow away. Watching water pouring off it we were concerned that our boat might not be able to return for us but as quickly as the storm had arrived it moved on and things quietened down. We saw Brown Noddy and Black-naped Tern between Rarah and Lorengau to finish off a rather more relaxing day.

19 August 2006. We had another whole day on Manus and decided we’d like to go back and look for the Superb Pittas again. We returned to Rossun and walked directly to the area we had seen the pittas previously. It was very nice to be completely relaxed about it, and not taking a roundabout route we arrived at much the same area in about half an hour. The pittas responded and we saw one well and the other only in flight. Brilliant. Otherwise it was rather quiet and we slowly made our way back to Lorengau. The better birds seen were an excellent Crested Baza, Stephan’s Dove, Island Imperial Pigeon, two Meek’s Pygmy Parrots, Manus Cuckoo-shrike and Bismark Golden Whistler while we heard another Variable Kingfisher. Back in town we saw Crested and Black-naped Terns offshore and from the hotel I bought some small carved wooden animals - a pig for Megan, dolphins for Nessa, sharks for Josh and a ray for me. We bumped into Aron in town and for some reason, presumably still euphoric with the pitta, I gave him a tip for helping us despite our having one owling session left and so more opportunities to do so. Bad move as it happened as when we picked him up that evening he was very drunk. I immediately wished I’d given the tip to Susan. In Rossun Aron was an embarrassment to his family and his sister was soon rustled up to help us look for the boobook. Despite her best efforts, and they were considerable, we only heard one. Disappointing as we’d made quite a bit of effort for it but most boobooks look the same anyway and the pitta, which we had seen it well twice, was the reason we came to Manus. 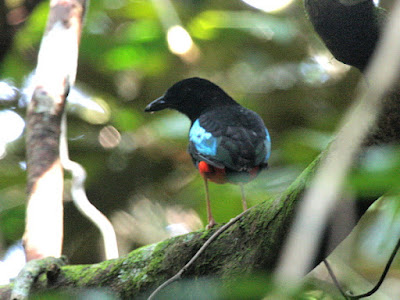 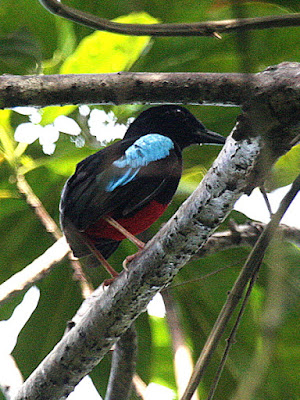 20 August 2006. A lazy morning with Crested and Black-naped Terns offshore and eight very distant Island Imperial Pigeons flying over the sea. In town we saw over 100 Uniform and two White-rumped Swiftlets, Moustached Tree-Swift and Rainbow Bee-eater. Richard took us back to the airport where we saw two Pacific Reef Herons, an Oriental Pratincole, a likely Sharp-tailed Sandpiper (views not good enough to rule out Pectoral) and 27 Pacific Golden Plovers. We had an hour on the ground at Kavieng but were not allowed to wait outside the terminal building and just saw a Willie Wagtail. We were back in Port Moresby early afternoon and in the Granville Motel’s grounds and nearby we saw a Papuan Marsh Harrier, Sacred Kingfisher, eleven Rainbow Bee-eaters, White-breasted Wood Swallow, Rufous-banded Honeyeater and Figbird.
21 August 2006. We arranged a taxi to take us back to the Pacific Adventists University outside Port Moresby for our last morning’s birding in PNG. We saw nearly 50 species during our visit including two Swinhoe’s Snipe (my 39th and final new bird of the trip), a Grey Teal, the two roosting Papuan Frogmouths, Green Pygmy Goose, Rufous Night Heron, Buff-banded Rail and at least four Fawn-breasted Bowerbirds and a bower. A very enjoyable end to a very enjoyable trip. We returned to Port Moresby and late afternoon departed to Singapore. 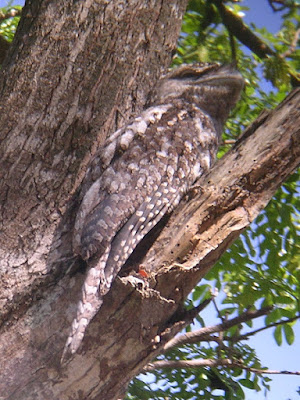 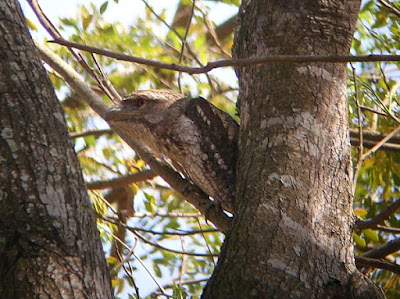 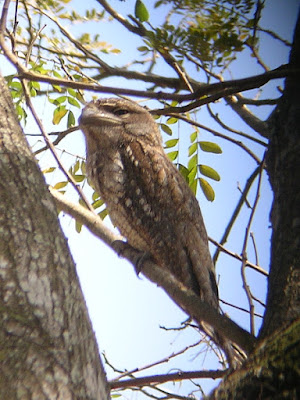 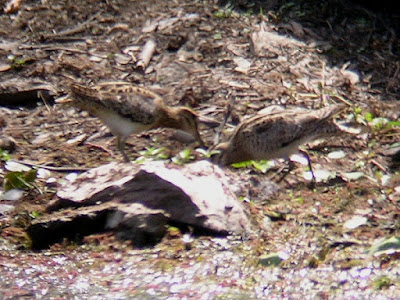 22 August 2006. We changed planes in Singapore and returned to Heathrow stopping for an hour’s daylight refuelling in Bahrain. There we saw Laughing and what appeared to be Collared Doves, Indian House Crow and House Sparrow, ideal for easing us back into local British birding …

Many thanks to the late Jon Hornbuckle for arranging the trip and inviting us along. Ashley Banwell found some great birds and drove us up to Keki and back on a dreadful track while Pete Gammage, Carlton Collier and Mike and Stephanie Brown were great company. Greatest thanks to long time travelling companion Nick Preston who didn’t take much persuading to come on the trip and stay on to visit Manus.

Posted by richard fairbank at 17:44