Introduction. Megan and I visited Finland and Norway in May 2016. We had a great time (see https://birdingneversleeps.blogspot.com/2016/06/norway-2016-oulu-to-varangerfjord-22-28.html) but I failed to see Siberian Jay, Siberian Tit, Tengmalm’s Owl and Steller’s Eider. All but the latter would have been new and I’d only seen one Steller’s before, in Britain in 1977 and 1978, so plenty of reasons to return. I saw Siberian Tit in Mongolia in May 2017 but again missed Siberian Jay making me even keener to see it. It and Tengmalm’s Owl were now my most wanted European birds. We also felt we should see the aurora so I booked a return trip to Finmark. We would be too far north to see the owl which would have to wait for another time, until one turned up on Shetland leaving just the Jay. We flew with Norwegian to Oslo where we had an afternoon and night (see previous Wheatear post)… All photos taken with a Canon SX60 bridge camera.
Thursday 21 March. We collected a packed breakfast from our hotel, the Scandic Karl Johan, and walked the short distance to Oslo South Station where we caught an early train to Gardermoen Airport. Our flight was on time and we arrived slightly early in a snowy Kirkenes. It was late morning and our car, an upgrade to a VW T-ROC with winter tires was waiting and we were soon off, taking the wrong turning at the first junction out of the airport and ending up at a military base. About half an hour later and having seen no birds at all we arrived at Sollia Gjestegaard, 12km the other side of Kirkenes and in sight of the Russian Border. We checked in, were told the Aurora had not been seen the previous evening and dumped our bags. We had an en suite room in a hostel-type block with a shared kitchen and drove back into Kirkenes to do some shopping. After no more than a km I noticed that one of the streetlights beside the road didn’t have a flat top. My thought processes went quickly from ‘it must be a bird’ to ‘it’s probably a buzzard’ to ‘it looks rather grey’ to hard on the brakes ‘it’s a Hawk Owl’. And it was, and our first bird in Finmark too. I watched it from the car and got out to take some photos. Walking a bit closer I inadvertently flushed it. It flew over my head and landed in a birch tree 100m away. Here it attracted the attention of four birds which started to mob it. Three were Siberian Jays and the fourth a Bullfinch. Siberian Jay was my main target for the trip and a species I was quite concerned about so being the second species seen was an absolute dream start. We drove into Kirkenes, did some shopping and wandered around the town before returning to Sollia. I wandered around the site without seeing anything while Megan cooked a meal. After dark we watched BBC i-player while I kept an eye on my aurora app and the heavy cloud cover but with the chance of seeing the Northern Lights less than 10% we didn’t go out. 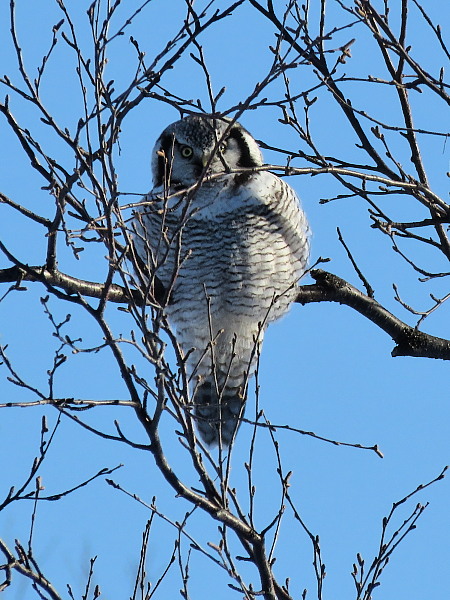 Friday 22 March. We had a wander around before breakfast seeing a Bullfinch and disturbing a Willow Grouse which gave a nice fly past. After breakfast we slowly drove to Neljan Tuulen Tupa in Northern Finland making a few stops on the way, notably for three Pine Grosbeaks. We arrived at 14:00 Finland time although it was rather confusing as my watch said 12:00 as it was still set to UK time (it wasn’t that easy to change), Megan’s watch was on Norwegian time at 13:00 while her i-pad had set to Russian time (15:00) while at Sollia and hadn’t corrected. About 20 Pine Grosbeaks were visible from the car park at Neljan Tuulen Tupa and while checking in I looked out of the back window and saw two Siberian Jays on one of the bird tables. We were given a very cosy room in the main building with a view to several of the feeders and a bit of space to spread out. Definitely my sort of place. I spent an hour round the feeders seeing the Siberian Jays, at least 30 Pine Grosbeaks, three Siberian and two Willow Tits. It was birth and sunny outside so we drove a few kms down the road to a war monument. There we followed a snow-mobile track to an old airfield, being careful not to wander off and immediately sink into knee high snow. It was an area we had visited in late May 2016 but it was hardly recognisable under a foot or so of snow. It also appeared to be completely birdless. Back at the lodge I spent more time at the feeders where two more Siberian Jays had appeared. As the light started to go the clouds rolled in and again it was i-player rather than looking for Northern Lights. 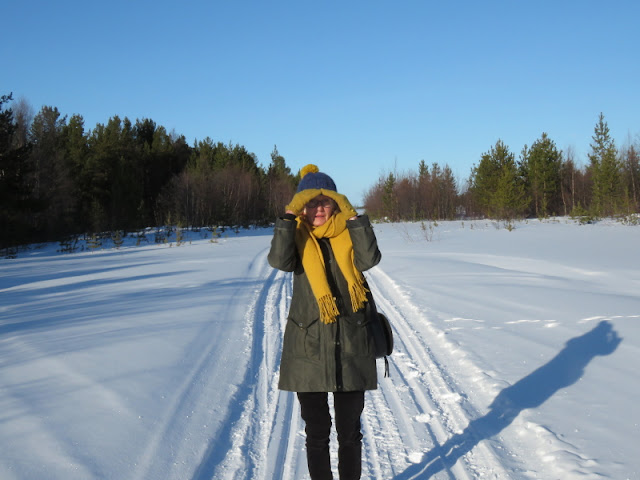 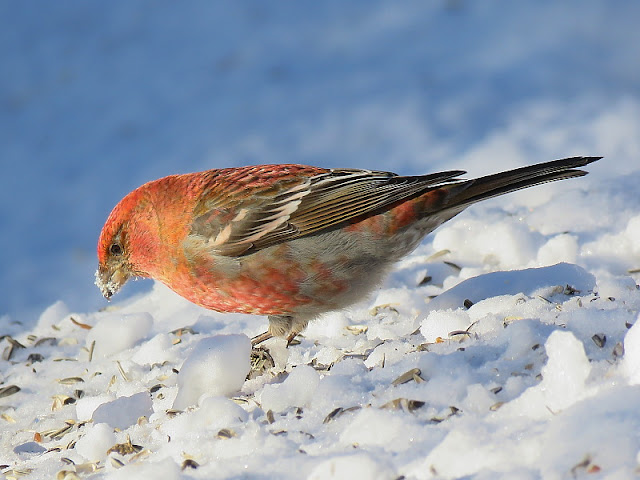 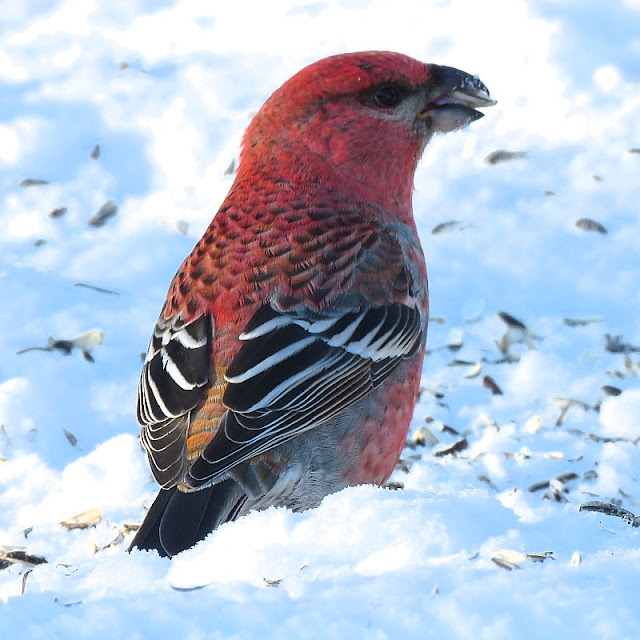 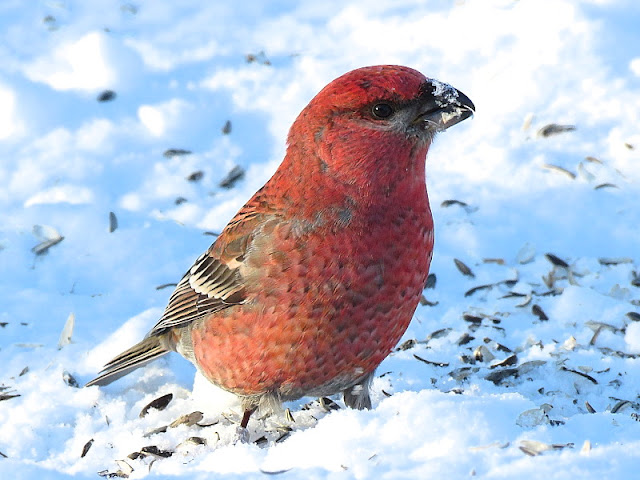 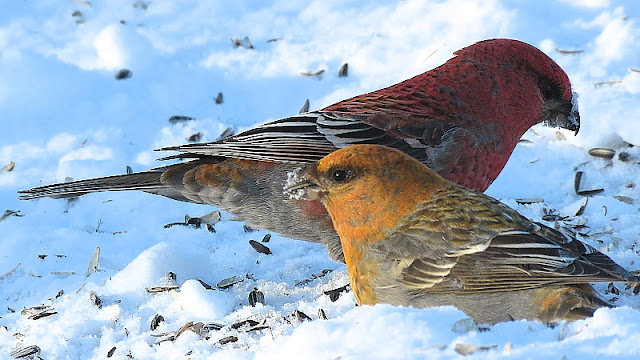 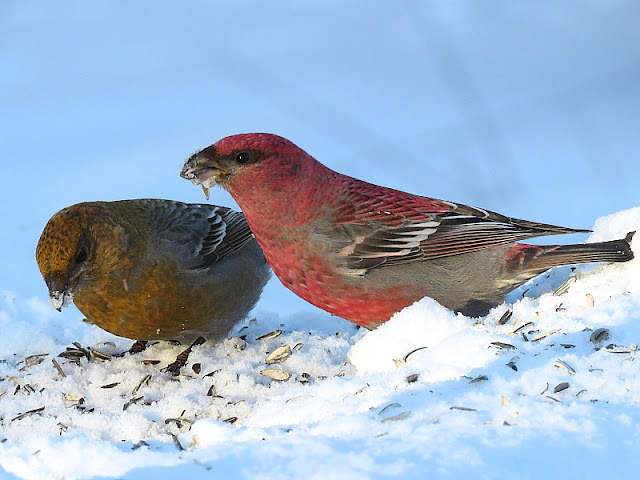 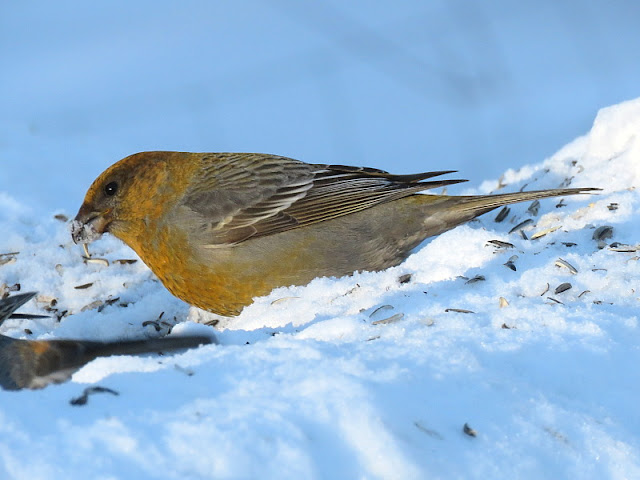 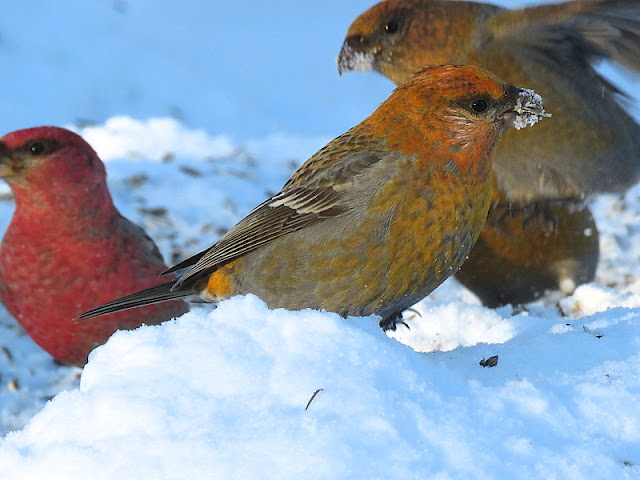 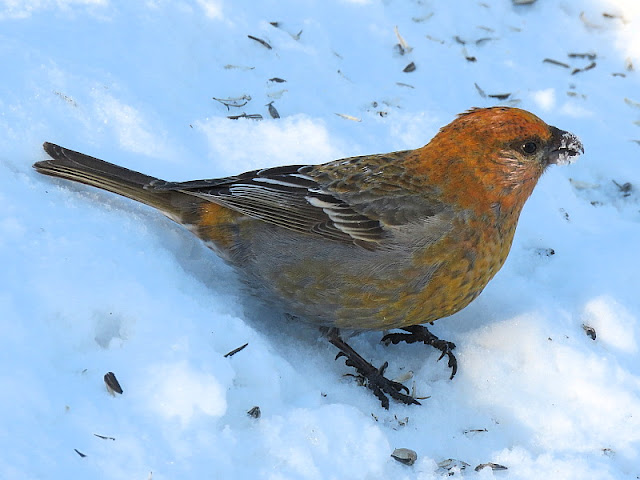 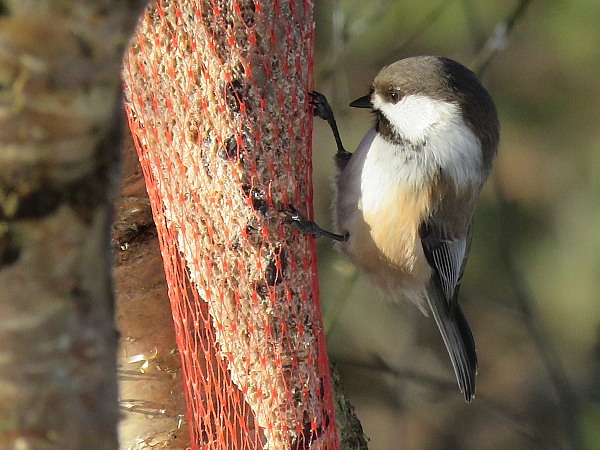 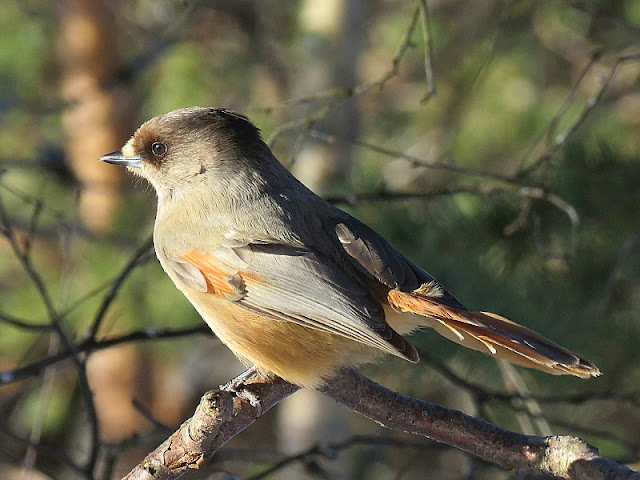 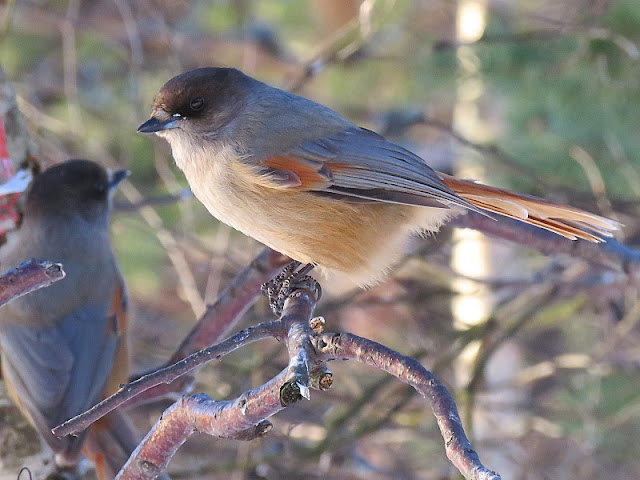 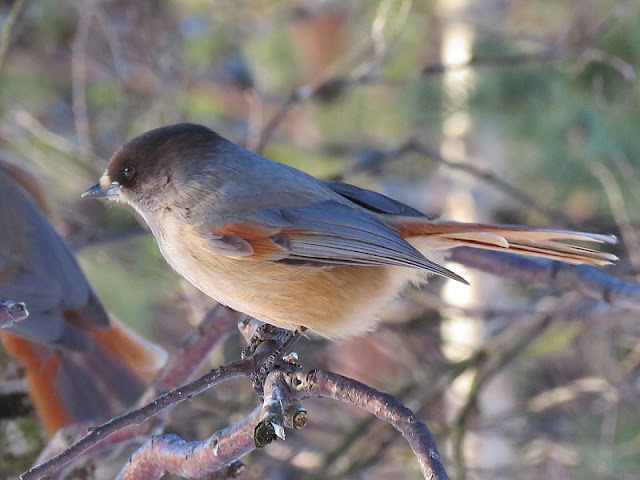 Saturday 23 March. After an excellent breakfast I spent half an hour seeing the same species at the feeders before we headed off north and back into Norway. We saw few birds, mainly Hooded Crows but also two Pine Grosbeaks. I was looking out for Hawk Owls having seen two on the same stretch of road in May 2016 but had no luck. On reaching Varangerfjord we headed along its north coast stopping at Nesseby. Here we met a couple of Finnish birders who’d left Neljan Tuulen Tupa half an hour or so before us. They’d seen three King Eiders in a small flock of Commons which had drifted out of sight and a Hawk Owl by the road we had come in on. We walked around the church and picked out a small flock of distant eider in which, after much scrutiny, I picked out a male King Eider. There could easily have been females with them. We continued on to Vadso seeing a juvenile White-tailed Eagle flying along the coast. We checked into the Scandic Vadso hotel to discover our booking wasn’t on their system. Our visit coincided with a North Norway skiing championship and the hotel was full although fortunately they managed to find us a room. We’d made the booking over ten months earlier and even then the preferred Vadso Fjordhotel (Birders Basecamp) was fully booked. We visited a supermarket then drove onto Vadsoya where 11 Steller’s Eider were present in the harbour. Before dusk we drove out of town checking potential aurora viewpoints as the forecast was for a clear night. We witnessed a nice sunset from above the town and after eating returned at 21:45. Lots of stars and not much light pollution from Vadso but the aurora app showed a low percentage of seeing one, just 12% throughout the night. We saw nothing and gave up and headed back to the warm hotel after half an hour. 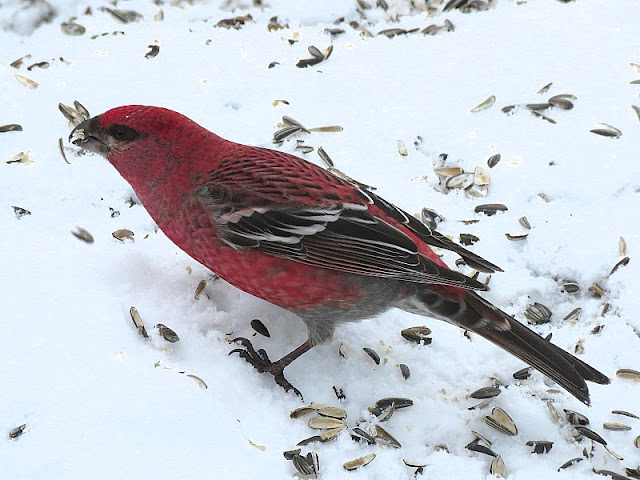 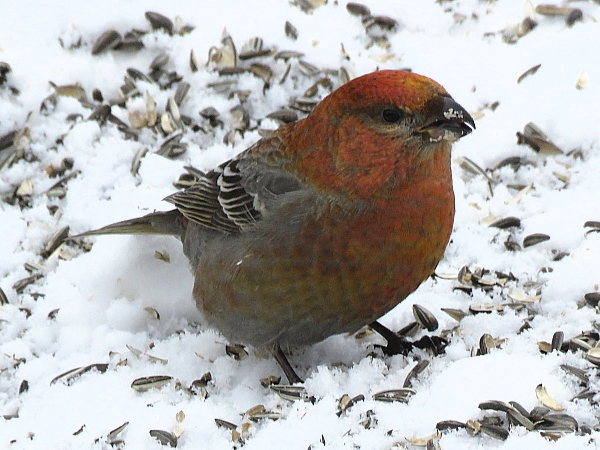 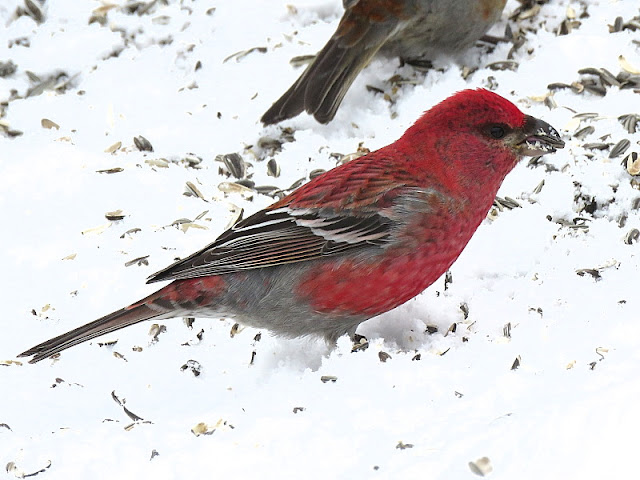 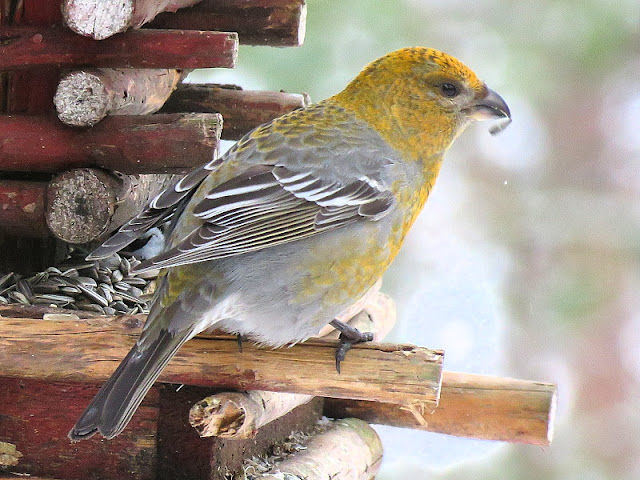 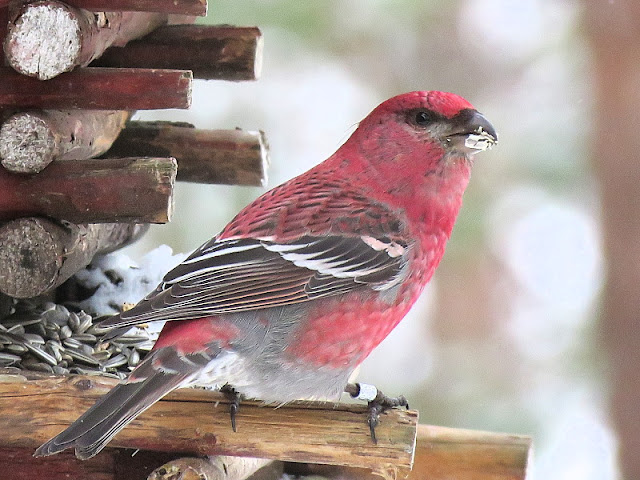 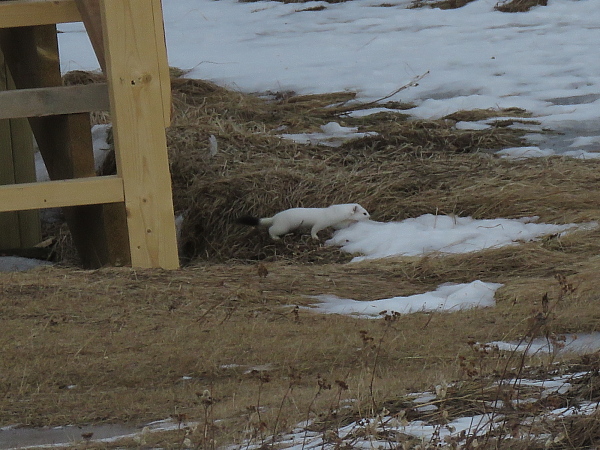 Posted by richard fairbank at 16:10