This is the second posting covering a trip to the Tibetan Plateau with Jon Hornbuckle, Ashley Banwell, Ed Dickinson, Phil Heath and Barry Wright and guided by Jesper Hornskov. It is based on my scant notebook entries, unreliable memories and a report Jesper produced. Most of the photos included are digitised prints I took although a few were kindly provided by Barry and Jon and acknowledged accordingly.

We'd arrived at the desolate Er La pass the previous afternoon, done a quick acclimatization recce up to the saddle and seen Roborovski's Rosefinch before continuing the short distant to Wenquan for the night.

18 June 2000. We returned to Er La pass and anxiously started the long climb up to the plateau. I'm not too good going up hills, particularly at altitude, and deliberately left my telescope and tripod in the vehicle to make it easier as I didn't want to fall too far behind. As it turned out the climb was much less arduous than I feared and I made it to the plateau with the others. It didn't take too long to spread out and find a pair of Tibetan Sandgrouse unobtrusively feeding on the stony desert floor. When the others wandered off scanning the slopes I monopolised Jesper's telescope, the only one we'd brought up with us, and gave the sandgrouse my full attention. They didn't move very far and towards the end of this time I realised why, they were accompanied by three mainly stationary, very small and very well camouflaged chicks. I noted that both parents were feeding the chicks although not while we were close to them. Several times when one of us stood up or moved the female shuffled off, belly low to the ground with wings partly extended and fluttered for a 'broken wing' distraction. The male did so once, rather less enthusiastically with one wing. Both parents were pecking at the ground but I couldn't determine whether they were feeding on small plants or insects. Both adults called to the chicks, a quiet seep seep, presumably telling them not to move. When the others left and I retreated the parents came closer and the chicks ran to them. They were absolutely superb and I watched them for 2.5 hours at 25-75m range. It was one of my best ever birding experiences. Elated we returned to the vehicles after seven hours, during that time I'd seen 2 Ruddy Shelduck, 2 Himalayan Griffons, 2 Tibetan Snowcock, the sandgrouse family, 40 Shore Larks, Pale Martin, 5 Guldenstadt's and 10 Black Redstarts, 4 Robin Accentors, 6 Rufous-necked and 8 White-winged Snowfinches, 6 Hodgson's and 20 Brandt's Mountain Finches and Roborovoski's Rosefinch. A brilliant morning. Back at the motel in Wenquan I wandered along the river seeing 34 Himalayan Griffons and a Black Vulture, an adult Lammergeyer, 2 Upland Buzzards, 8 Blue Hill Pigeons, an excellent Saker, 2 Dippers (one a brown morph), 2 Guldenstadt's and 10 Black Redstarts, 12 Hume's Groundpeckers, 6 Rufous-necked and 2 White-rumped and a Black-winged Snowfinch and 5 Twite. 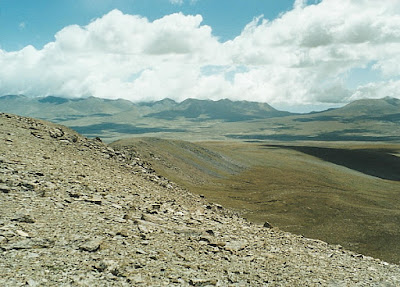 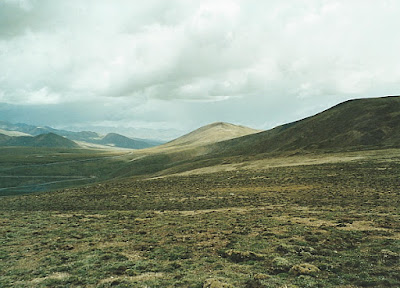 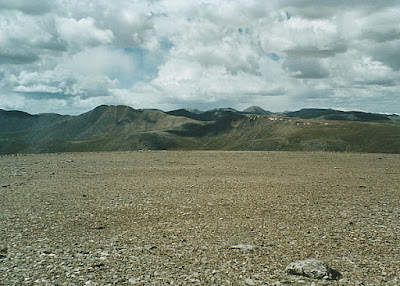 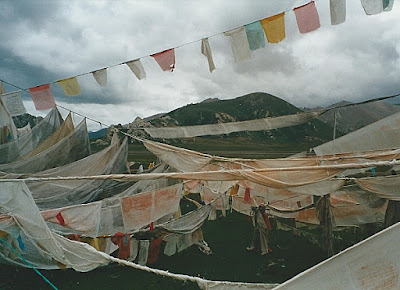 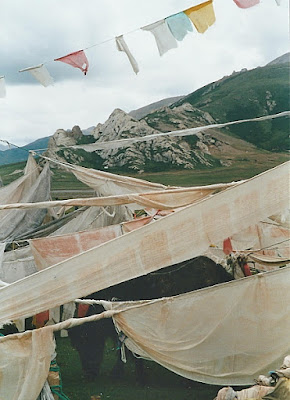 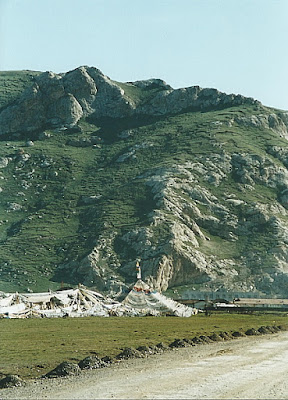 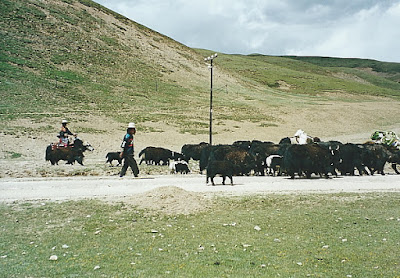 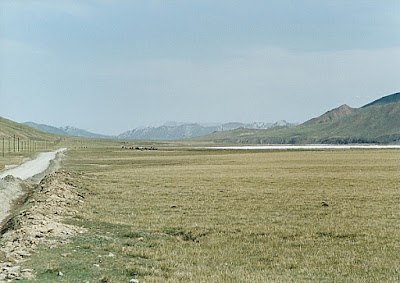 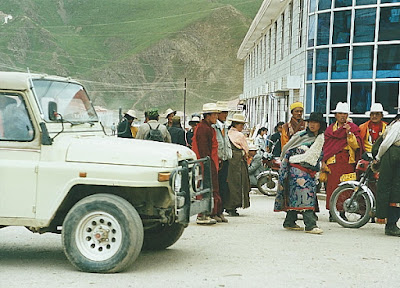 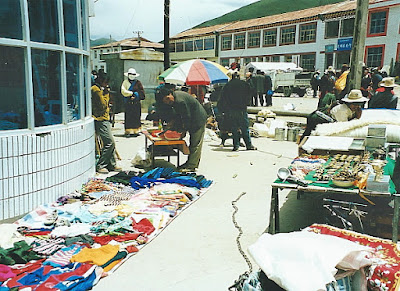 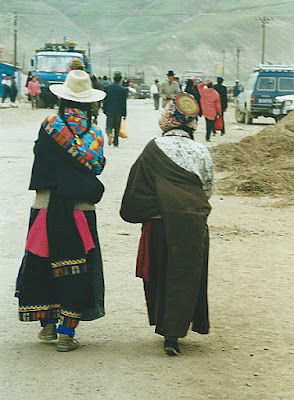 20-23 June 2000. Jesper took us to a forest reserve only once previously visited by birders. We stayed in basic accommodation near Banma and birded the surrounding forest and that within a 10km drive over the course of three and a half days. It was good forest but I found the very steep sided valleys quite challenging habitat to explore as the higher slopes always appeared more attractive than the valley floor. We often split up and on a couple of days I took some compressed biscuits and stayed out all day to save having to climb back down for lunch and back up again. As lunch was noodles I found this an easy decision although it sometime meant I was a bit slow learning of what had been seen by the others. I was also suffering a bit from poor health for the first couple of days and took things easy on our middle day. Too easily as I was too slow off the mark to look for a flock of Spot-breasted Scimitar-Babblers near our accommodation that afternoon. Jon seemed to have limitless energy, setting a net at the bottom of the valley where we started birding, climbing up the valley side and back down to check them a couple of times before and after lunch, not that he caught much of interest until a Chinese Fulvetta on our last morning. The best birds I saw at Banma were 2 Blue Eared and 12 Blood Pheasants, 4 Verreaux's Monal Partridges, Lammergeyer, Black, Three-toed and 3 Grey-headed Woodpeckers, 8 Sichuan Grey Jays, 7 Crested Tit-Warblers, Yellow-streaked, 5 Greenish, 25 Hume's, Large-billed, 2 Orange-barred and 5 Lemon-rumped Warblers, 13 Giant, 26 Elliot's and 4 Pere-David's Laughingthrushes, 3 Long-tailed Mountain, 3 Chestnut and 17 Kessler's Thrushes, Rufous-breasted and 3 Maroon-backed Accentors, Himalayan Bluetail, Blue-fronted, 21 Hodgson's and 12 White-throated Redstarts, 11 Slaty-backed Flycatchers, 3 Long-tailed, 33 Pink-rumped and 10 White-browed Rosefinches, 43 Crossbills and 3 Grey-headed Bullfinches. It was a great site but I left feeling a bit disappointed being the only one failing to find Severtzov's Grouse, despite it being seen every day we were at Banma. 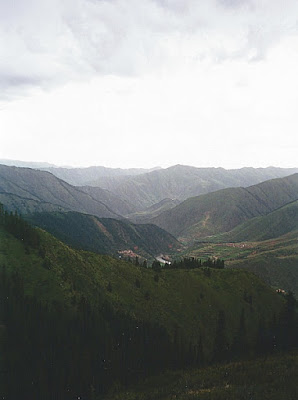 23 June 2000. The original plan was for an early start to drive back north to Huashixia and then on west to Maduo in one long day but Jesper had learnt that the road beyond Huashixia was particularly bad. We decided to break the journey Huashixia where there was a basic motel and that gave us time for a final look on the forested hillside opposite Banma before leaving mid morning. Birds seen at Banma are included in the previous list, the morning's highlights being the Three-toed Woodpecker and Chinese Fulvetta. Time slipped away as we drove north not helped by a couple of roadside birding stops and a puncture. Late afternoon the weather deteriorated, light rain turning to sleet as we started climbing. We pressed on after dark as the only alternative was a night in the vehicle which would have been freezing as we were now above 4000m. Mid evening and still two hours short of Huashixia we came to a small farmhouse. Jesper went in to try and arrange accommodation and we were given the use of what looked like an empty cowshed. It didn't look that inviting but at least the floor was clean and generally dry and we all had good sleeping bags. Birds seen mainly from the vehicles on the drive to Changmahe included 130 Upland Buzzards, 21 Cuckoos, 8 Hoopoes, 4 Sakers, 10 Hume's Groundpeckers, 5 Grey-backed Shrikes and 40 Rufous-necked, 10 White-rumped and 2 Black-winged Snowfinches and 30 Black Redstarts. 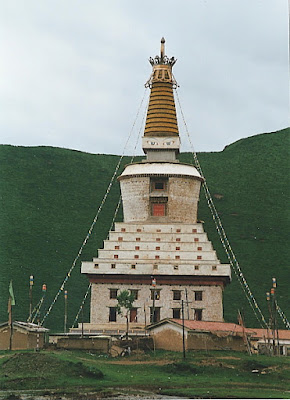 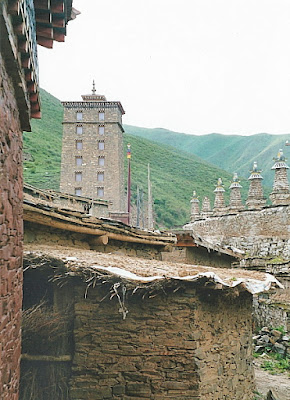 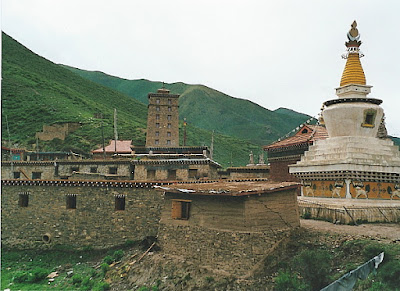 23 June 2000. It was a freezing night (Jesper said it was 4500m) and our drivers providing a brew at dawn was most welcome. We continued on to Huashixia, initially with a light covering of snow all around. As we dropped altitude the snow disappeared and we made good time to Huashixia. The road from there to Maduo was very bad in places, with several trucks stuck in mud and completely blocking the road in either direction. Included in the jam was an army convoy and a lot of soldiers were standing around, some leaning on shovels in dismay. Only off-road progress looked possible for the foreseeable future although a bus had tried it and was stuck leaving the road. A couple of 4WDs made it although others became temporarily stuck including ours at one stage. We were eventually helped out, cleared the jam and made it back onto a firmer section of the road. It was with some relief that we rolled into Maduo and even the grim Gulag hotel there seemed a welcoming refuge. During the day I saw 20 species, the highlights being 45 Upland Buzzards, Lesser Sand Plover, 10 Sakers, a Long-billed Calandra and 30 Shore Larks, Robin Accentor and 12 Hume's Groundpeckers. 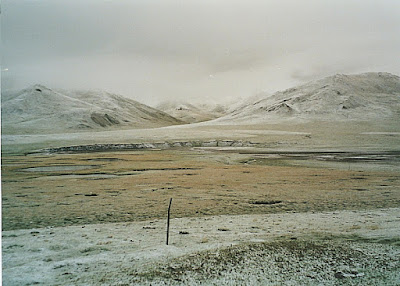 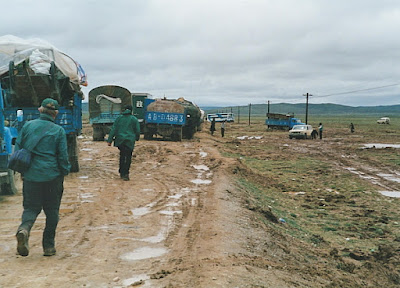 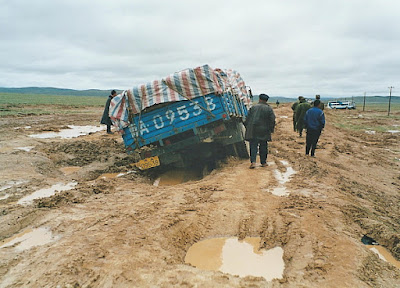 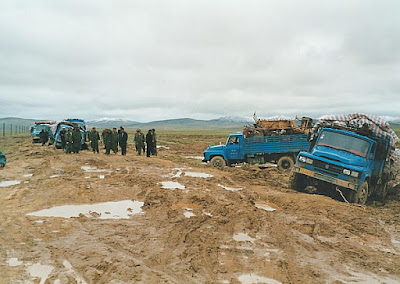 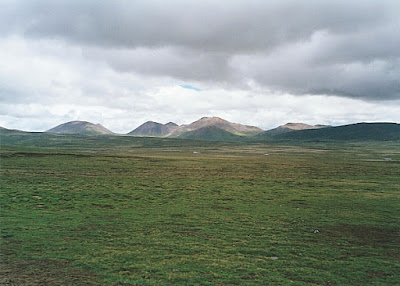 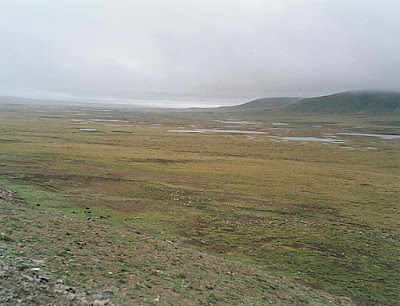 Posted by richard fairbank at 22:14