Tuesday 13 August. As soon as the rain stopped I took Cookie up to Mill Hill. The calmest day for a while and my best visit this autumn although there had been a big clearout of Willow Warblers with just 4 seen. We also saw 6 Reed Warblers (possibly a site record for me), 2 Lesser and  23 Common Whitethroats, 9 Blackcaps and single Garden Warbler, Chiffchaff, Peregrine, Buzzard, Long-tailed Tit and Swift. Back home one of the adult Great Black-backed Gulls was briefly on the roof opposite calling, it had not completely given up on its youngster yet. 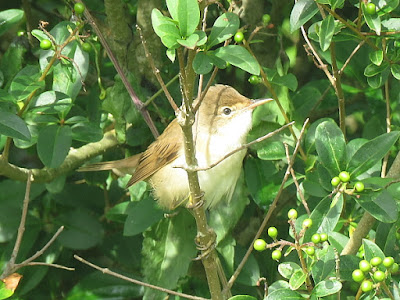 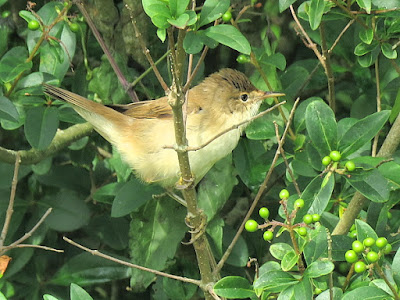 Monday 12 August. One of the adult Great Black-backed Gulls was on the roof opposite calling when Megan and I took Cookie up to Mill Hill. It was still there when we returned but had moved on by lunchtime. There had been a decent fall of Willow Warblers at Mill Hill, we saw 31 and also 21 Whitethroats, 2 Blackcaps and a Swift. At low tide we visited the Adur between heavy downpours seeing another 2 Willow Warblers, the Whimbrel (the only wader) and 110 House Sparrows. 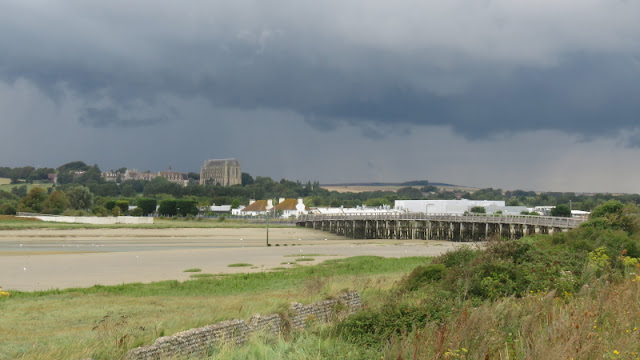 Sunday 11 August. The two adult Great Black-backed Gulls were on the roof opposite calling throughout the day and often looking down into the garden below. There was no sign of the youngster and I can only assume it was blown from the roof in the gales during the night and perished. Very sad. Megan and I took Cookie to Brooklands where our most interesting sighting was a highly mobile tit flock (6+ Long-tailed, 10+ Great and 8+ Blue). 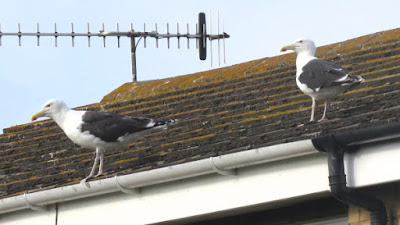 Saturday 10 August. I seawatched at Widewater from 06:30-08:00 and was rewarded with a rather distant Balearic Shearwater flying west. Otherwise just 5 Gannets, 2 Kittiwakes, a Sandwich Tern and a Swift were seen. Later Megan and I took Cookie to Rackham in the hope of finding some shelter. Sheltered it mainly was but hardly any birds were seen with 3 Kestrels best (by far). The young Great Black-backed Gull with at least one adult remained on the roof. 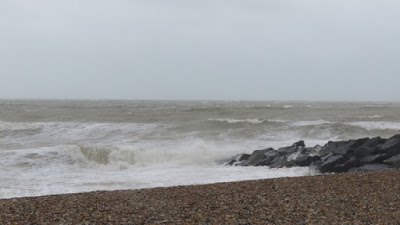 Friday 09 August. Megan and I took Cookie to Mill Hill. It was quite breezy which kept small birds out of the way with 4 Whitethroats and single Blackcap and Willow Warbler seen. A Swift flew south and at one stage a Peregrine was having a punch-up with 2 Ravens before breaking off to continue flying lessons for its two youngsters. The young Great Black-backed Gull with at least one adult remained on the roof.
Thursday 08 August. Megan and I took Cookie to Brooklands but it was very quiet with a Common Sandpiper and Reed Warbler best and disappointingly no interesting gulls. Megan went on to see her dad in hospital while I took Cookie home via the Adur. This was even quieter with just 2 Little Egrets, and Oystercatcher and 2 Redshank. Scoping across to Lancing college added 6 Swifts, a Swallow and 5+ House Martins. The young Great Black-backed Gull remained on the roof, flapping vigorously for several minutes at dusk.
Wednesday 07 August. I took Cookie up to Mill Hill where we saw 3 Peregrines engaged in acrobatics, 2 Kestrels, a Sparrowhawk and a Buzzard. On one occasion all were in the air at the same time which was impressive. Also 2 Swifts and a Jay but no small birds at all. We came home via the Adur where we saw single Oystercatcher, Ringed Plover, Whimbrel and Common Sandpiper, 2 Little Egrets, a couple of  juvenile gulls and 4 House Martins over Lancing College. The young Great Black-backed Gull was still on the roof.

Posted by richard fairbank at 12:08