Tuesday 06 August. I took Cookie up to Mill Hill and while there received a phonecall from JK asking if I fancied going to Pagham for the Squacco Heron that was still around that morning. Mill Hill was quiet with a Lesser and 4 Common Whitethroats and a Blackcap and Pagham sounded more tempting than another low-tide visit to the Adur so it was the push I needed. John picked me up and we drove to Pagham where there was a space at the far end of Church Lane. We walked along the North Wall meeting a couple of birders who told us the Squacco hadn't been seen for almost two hours. We continued and just before its favoured field met Barry and Margaret Collins who told us it had returned and was showing quite well. The Squacco Heron was feeding in the back of field and we watched it for 10 minutes before it flew into/behind the small copse to the west. Fortunate timing we later repeated on a return to the area when after a 15 minute wait it flew around for several minutes before dropping back into its field. This time it stayed in view for 15 minutes before flying a short distance into a ditch. We waited another half hour before leaving shortly before it reappeared. JK hurried back for more distant views but I stayed on the North Wall watching distant waders as the tide was coming in. While at Pagham we saw 2 Cattle and 20+ Little Egrets, 11 Greenshank, 35 Dunlin (most adults), 20 Curlew, 16 Black-tailed Godwits, 2 Sand Martins and 10 Swallows. 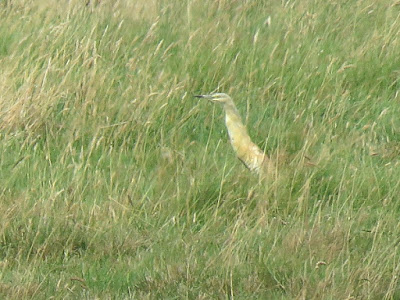 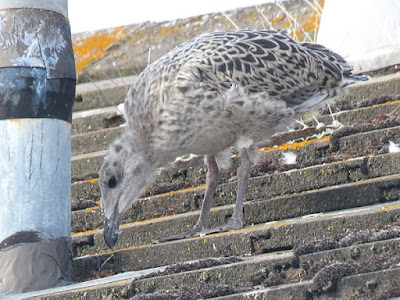 Monday 05 August. Early rain stopped me visiting Mill Hill but it started to clear coinciding with a decent low tide so Cookie and I headed for the Adur. There I saw a North Thames colour-ringed Herring Gull, the 153rd different colour-ring I've read on the Adur between the railway line and A27. Also on the Adur were one possibly two juvenile Yellow-legged Gulls, 7 Little Egrets, 6 Oystercatchers, a Whimbrel and a juvenile Redshank. 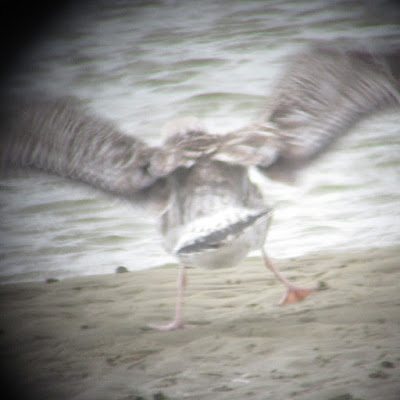 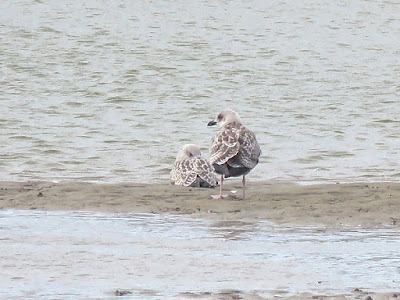 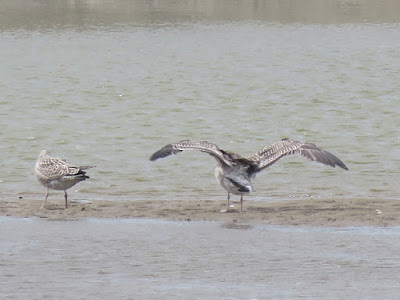 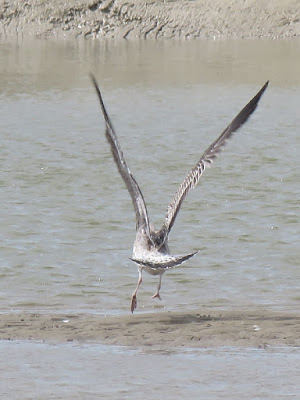 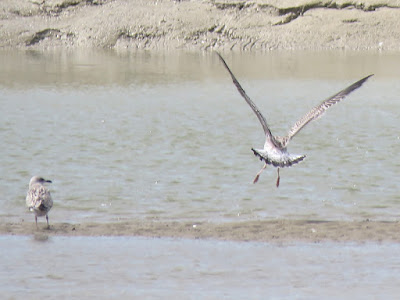 Sunday 04 August. I took Cookie to Cissbury in the hope of an early migrant or two but it was disappointing with a few common warblers (single Willow and Chiffchaff, a Lesser and 10 Common Whitethroats and 4 Blackcaps) and 3 Stonechats. A distant Raven was mobbing a large raptor with a square tail but it pretty much flew away leaving me wondering, although Common Buzzard would seem most likely. 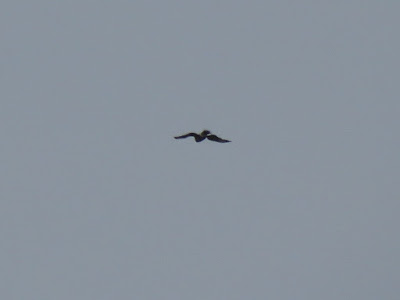 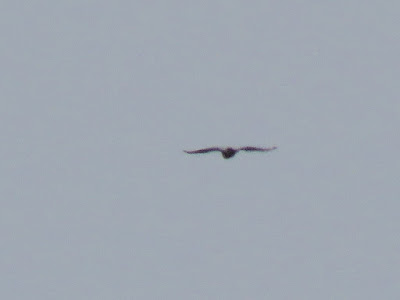 Saturday 03 August. My arm was still sore/painful and I thought it best not to drive so Cookie and I visited the allotment.

Friday 02 August. I took Cookie up to Mill Hill which was rather quiet with 9 Whitethroats, 2 Chiffchaffs and single Willow and Reed Warblers. Later I took Megan down to the station as she was heading for the Eurostar for a long weekend in Paris with Nessa. I then had my rescheduled Pneumococcal vaccine which was fine at the time but later gave me a very sore arm, memories of Typhoid inoculations but worse.
Thursday 01 August. I took Cookie to West Mill and we walked out to the old railway line. I saw 5 Kestrels (presumably a family), 2 Ravens, a Willow Warbler, a Lesser and 6 Common Whitethroats, a Bullfinch, 4 Yellowhammers and 4 Reed Buntings. Only the Ravens and Yellowhammers were vocal and I drew a blank on Turtle Dove which I've seen on each visit in June and July. One of the adults regurgitated what looked like a bit of fish tail for the young Great Black-backed Gull which scoffed it before I could go in for my camera.

Wednesday 31 July. Cookie and I went to the south section of Knepp where the camera traps seen along public footpaths on our last visit had been taken down making it feel slightly less unwelcoming. It was very quiet. Two distant Turtle Doves on wires by the south gate were the highlight. I've found this to be the most reliable site for them and usually see one when arriving or leaving. One Whitethroat was seen and a couple of Chiffchaffs the only other warblers, two sizable tit flocks and two Bullfinches. Later I took Cookie down to the Adur and wished I hadn't bothered with just 2 Grey Herons, 3 Little Egrets and an Oystercatcher to show for it. Embarrassingly I also missed my appointment for a Pneumococcal vaccine jab. 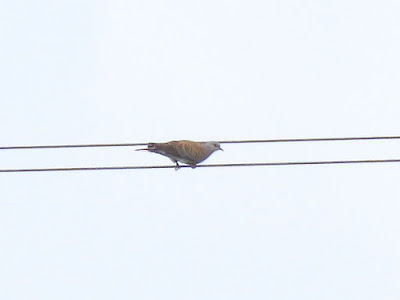 Tuesday 30 July. I took Cookie to Shoreham Fort where there were 8 Turnstone and a juvenile Yellow-legged Gull but nothing was sheltering from the strong winds and nothing was seen on the sea. Given the tide and the weather we then went to Brooklands where 6 Common Sandpipers were the highlight. 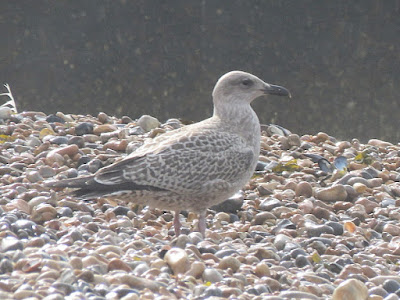 Monday 29 July. Megan and I took Cookie up to Mill Hill where I saw my first Willow Warbler of the autumn. Also 2 each of Swift and Swallow, single Raven and Yellowhammer but only one Whitethroat. A late afternoon visit to the Adur produced single Whimbrel, Common Sandpiper, juvenile Yellow-legged Gull and Swallow and at least 8 distant House Martins and a Buzzard over Lancing College.
Sunday 28 July. Megan, Nessa and I took Cookie to Steepdown where two loose flocks of Swifts totalling 81 flew west. Otherwise it was quiet with 14 Corn Buntings the highlight. Mid afternoon I dropped Nessa at the station and went on to the Adur. My first returning Common Gull, an adult and 2-3 juvenile Yellow-legged Gulls and a Whimbrel made it one of my more worthwhile visits. 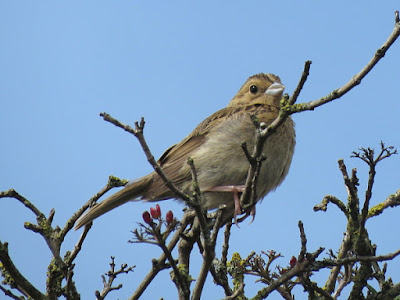 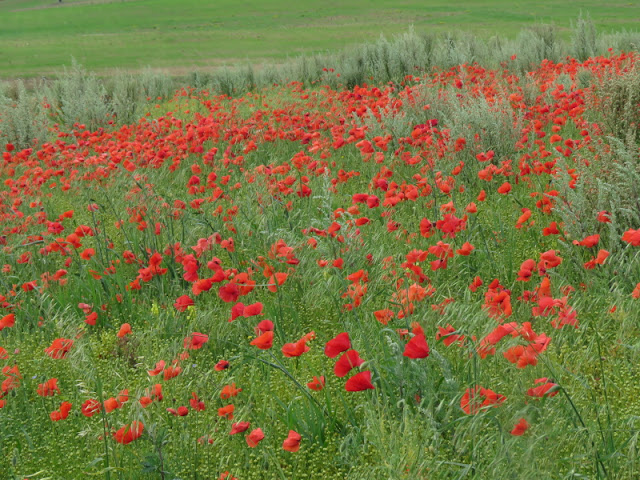 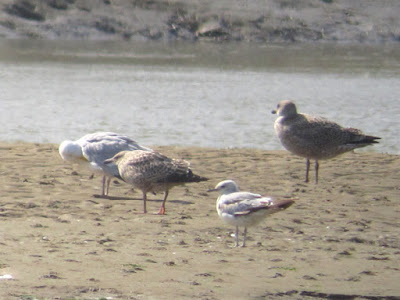 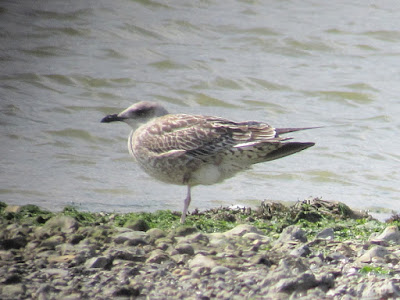 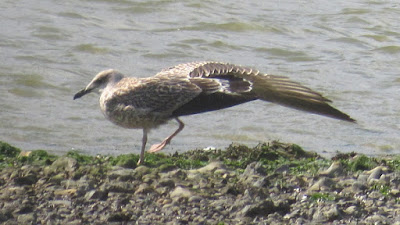 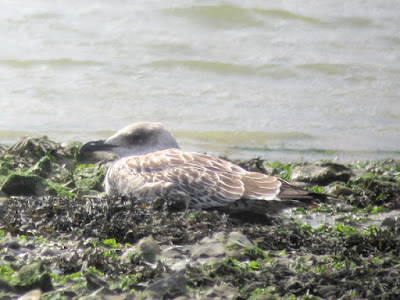 Posted by richard fairbank at 22:30