Thursday 17 October. Dave and I started at Skaw and walked the North Cliffs checking the Geos. I found it hard work (as usual) and although there seemed to be more birds about they were all fairly ordinary. A circuit around Norwick was similar - it probably wasn't that bad but I was pretty down from yesterday's rubythroat dip - and we returned to Millfield for toast. Dave suggested spending the afternoon walking the cliffs at Lamba Ness. It seemed like a good idea as it was somewhere we had not been for a few days. We drove a little way down the approach track and Dave dropped me by the small quarry before parking a bit further on. I followed some dry stone walls and abandoned crofts to the coast, meeting him where the ditch/burn he'd followed down from the road came out. We followed the coast around the North Cliffs towards Lamba Ness. This proved a wise choice as mid afternoon Dave, who was a few paces ahead of me as we approached the 'causeway', flushed a white-rumped redpoll feeding with some Snow Buntings near the cliff edge. Views were very suggestive of Arctic Redpoll and from the outset Dave considered it a very strong hornemanni contender. I was out of my depth having previously only seen one in Suffolk but when flying it gave a short buzzing call which was quite unlike any redpoll either of us had heard before - on one memorable occasion it flew right over my head calling as it did. Dave sent Brydon a quick photo and described the call. Reassuringly Brydon had only heard similar from Hornemann's and thought the image very convincing too. The bird was quite mobile and twice we lost it for 20 minutes or so. We tried to record it but it only called once more and we were not quick enough. On one occasion it was feeding near two Siskins which looked puny in comparison. We followed it along the cliff edge near to the point at Lamba Ness where we lost it once more. By now the light was fading and we headed back to the car somewhat elated. The chance of finding one's own rarities is what birding on Unst is all about and by plugging away and not giving up we'd been successful, even if Dave had done all the heavy lifting. Birds seen included a Long-tailed Duck, Great Skua, 2 Merlins, 7 each of Chiffchaff and Blackcap, 20 Goldcrests, 3 Ring Ouzels, 5 Fieldfare, 150 Redwing, 23 Song and a Mistle Thrush, 24 Robins, Redstart, 2 Tree Sparrows, 50 Brambling, 20 Twite, the Hornemann's Arctic and 6 Mealy Redpolls, 4 Siskins and Lapland, Reed and 39 Snow Buntings. 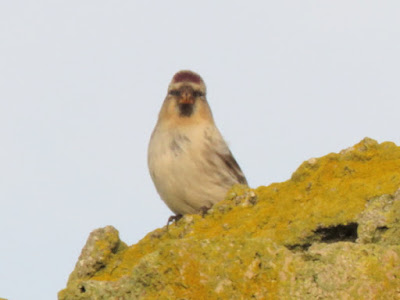 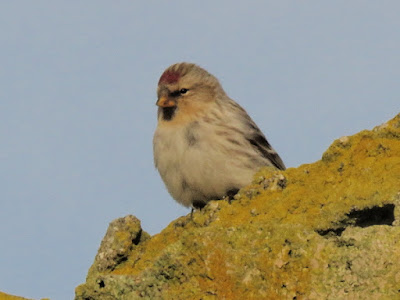 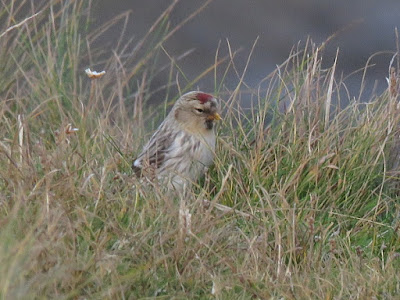 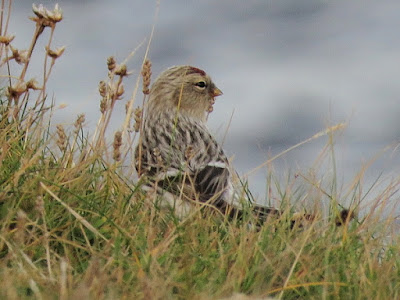 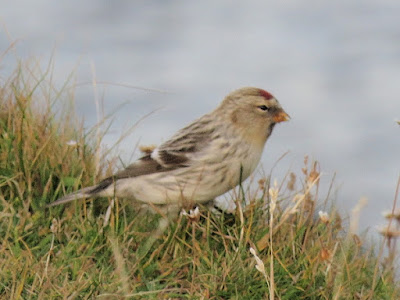 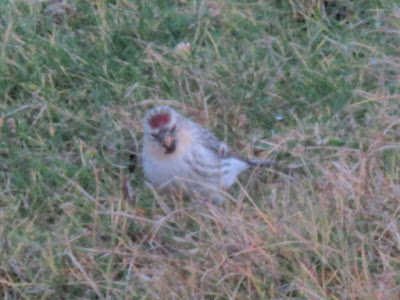 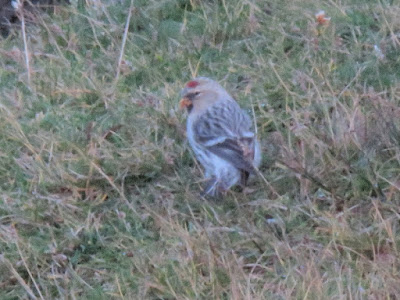 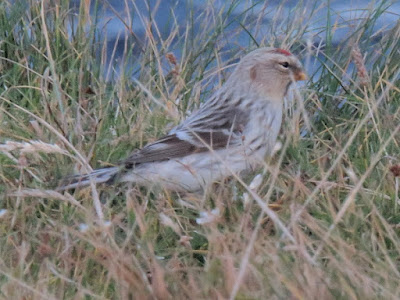 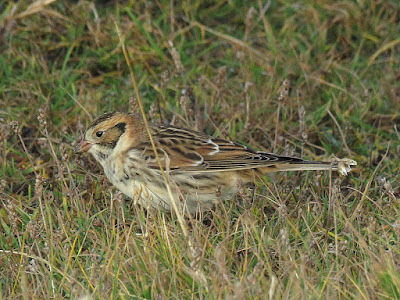 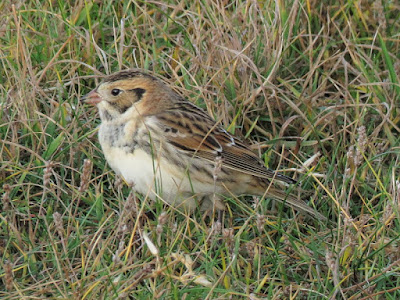 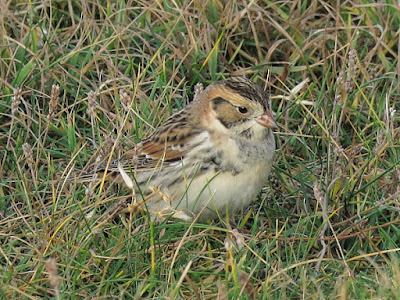 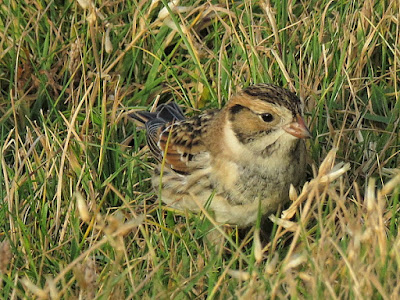 Friday 18 October. We visited Skaw, Lamba (where we couldn't find yesterday's Hornemann's Arctic Redpoll), Norwick, Haroldswick and Burrafirth and were heading back for tea when Dave suggested checking North Dale as we had half an hour of light left. It turned out to be an inspired choice ... A Waxwing was briefly sat on one of the low pine trees where we parked then flew off behind Saxa Vord. Walking up to North Dale we saw a grey shrike sat in the middle of the road. It was distant but it soon became apparent it had a large white wing patch and long wings - a Lesser Grey Shrike and a first-winter as it lacked a black forehead so definitely not Brydon's adult we'd seen at Halligarth a week earlier. Another day that had been an effort but where persistence eventually paid off. I was now definitely sold on Unst. Other birds seen included the Velvet Scoter (now in Norwick Bay), 2 Long-tailed Ducks, Black Guillemot, Short-eared Owl (sadly a rescued road-casualty), a Swallow, 4 Chiffchaffs, 6 Blackcaps, just 2 Goldcrests, 4 Fieldfares, 80 Redwing, 15 Song and 3 Mistle Thrushes, 16 Robins, a Black Redstart, 3 Tree Sparrows, 140 Brambling, 25 Twite, 9 Mealy Redpolls, 2 Siskins and 18 Snow Buntings. 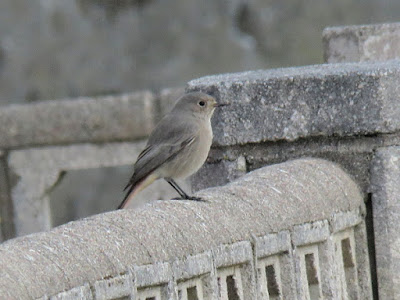 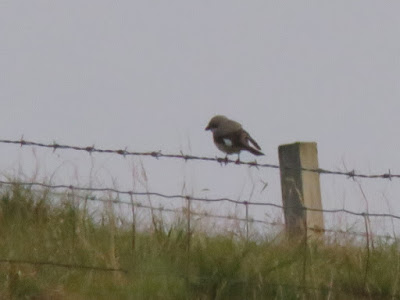 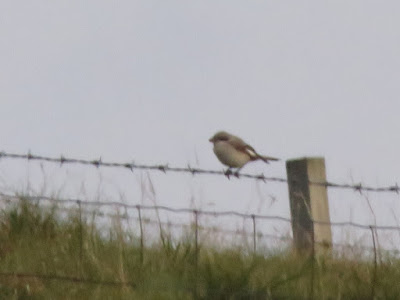 Saturday 19 October. We returned to North Dale but the wind had picked up overnight and the whole area was windswept. We had a good look for the Lesser Grey Shrike in adjacent valleys but without success. We tried Skaw which was quiet and were at Norwick when Brydon let Dave know that he and Mike had found an Olive-backed Pipit by the School at Baltasound. We drove straight there and after several frustrating flight views had a decent view in the pines. We followed Robbie back to his house to look for a Hawfinch that was coming to his feeders but it flew off just as we were arriving. A cup of tea and chat made the visit worthwhile. We returned to Millfield for toast, Dave seeing a juvenile Glaucous Gull from the kitchen window, my 100th species seen on Unst in the two weeks I'd been on the island. We returned to Lamba Ness where another 2 Glaucous Gulls were roosting, although not anywhere that was approachable. One was a very tatty, almost tail-less near adult and the other a very dark bodied first-winter. We finished the day at Haroldswick where the Black-throated Diver was still present in the bay and Burrafirth. Other birds seen during the day included Long-tailed Duck, Great Skua, a Swallow, 2 Chiffchaffs, 2 Blackcaps, 2 Fieldfares, 50 Redwing, 60 Brambling, 10 Mealy Redpolls and 7 Snow Buntings. 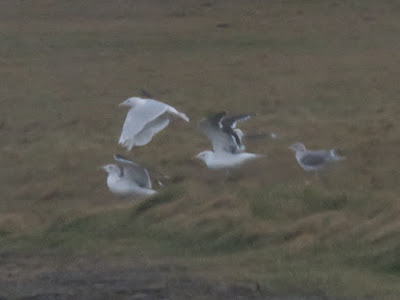 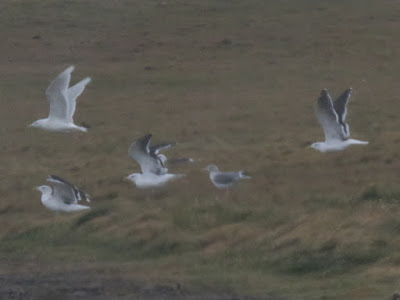 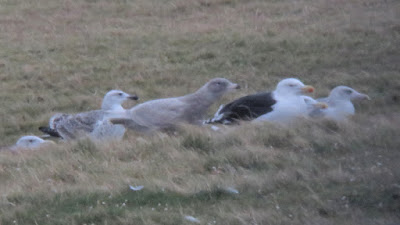 Sunday 20 October. We headed for Lamba Ness for a seawatch checking a small gull roost on the track there. No Glaucous Gulls this time but an impressive argentatus Herring Gull with a seemingly familiar red colour ring. Here we messed up, trying to photograph it through the front windscreen rather than my attempting to read it through a telescope. By the time I thought to do so it had flown. Dave's photos revealed the first two characters (NJ) but the last two were indecipherable. If it was a North Thames bird, the commonest gull rings I see in Sussex, the third would be a number (it looked more like an L) and the last a T. The colour-ring website provided no further clues. Frustrated at having let it slip away

we continued to Lamba Ness finding shelter behind one of the derelict buildings from the cold moderate NNE wind. In a couple of hours we saw 2 Long-tailed Ducks, a first-winter Glaucous Gull, 150 Kittiwakes and 3 Blue and an estimated 5000 Fulmars flying north. An impressive first experience of a late autumn seawatch, although Dave had told me NW winds are best at this time of year, a bit of a surprise. We warmed up a bit walking around Skaw seeing little. A Woodcock was the highlight at Vaylie (my first on Unst) then we had a drive down south. With my time on Unst starting to slip away I took photos of all the tourist sites on the way to and from Sandwick where we saw 3 Great Northern Divers in the bay. Other birds seen during the day included the Velvet Scoter (back at Haroldswick), 20 Goldeneye, 3 Chiffchaffs, 4 Fieldfares, 40 Redwing, 2 Tree Sparrows (at Millfield), 55 Brambling, 20 Twite and 6 Mealy Redpolls. 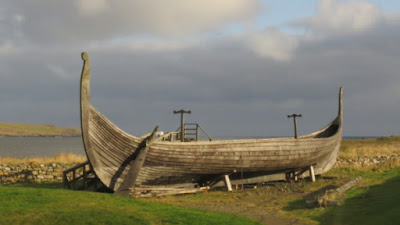 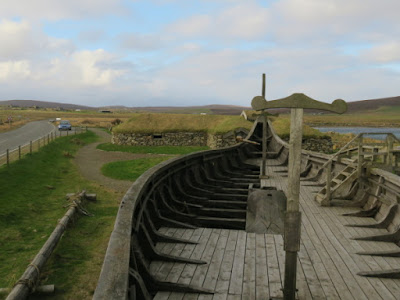 Monday 21 October. We spent the day visiting Skaw, Norwick, Burrafirth and Haroldswick. Despite the wind having gone around to the SW the birds had a decidedly wintry feel to them with the Velvet Scoter, 5 Goldeneye, a first-winter Glaucous Gull (at Burrafirth), 2 Merlins, single Common and Siberian Chiffchaffs, a Blackcap, Fieldfare, 30 Redwing, 9 Brambling, 25 Twite, 11 Mealy Redpolls and 25 Snow Buntings. 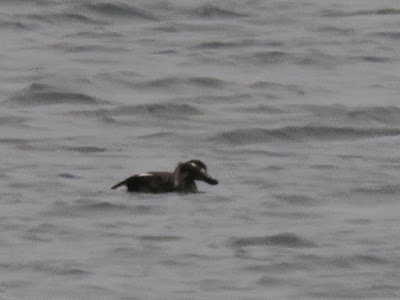 Tuesday 22 October. My last full day and with the wind finally in the NW we drove straight to Lamba Ness for a seawatch. We watched for three hours, sheltered infront of the last building. Northerly passage was impressive and I recorded male Long-tailed Duck, first-winter Glaucous Gull, 14 Great Skuas, 13 Little Auks (I failed to get onto a further 6), 11 Guillemots, 2 Razorbills, 2 Black Guillemots, a Puffin, 25,000 Fulmars, 68 Blue Fulmars (Dave saw 94!!), 250+ Kittiwakes, a Sooty Shearwater and 500+ Gannets. We returned to Vaylie then covered sites around Haroldswick. After returning for toast we tried Skaw and finished at Lamba Ness. Dave was hoping for another 6 Blue Fulmars but the wind had shifted and little was going past. Walking to the end of Lamba Ness we flushed a small short-tailed bunting shaped passerine from a damp area of shortish grass. It was silent and landed just out of sight on the cliff edge. We approached, perhaps too casually, and it flew further along the cliff edge and appeared to stop in a small gully. We were more cautious in our approach fully expecting to see it on the opposite side of the gully but it had vanished. We doubled back checking the cliffs and tried the area where we'd originally flushed it. Nothing. We tried further along the cliff but it had vanished. Frustrating as we had a pretty good idea what it had been. Continuing to Lamba Ness it was clear that the wind had shifted and little was going past. Dave would have to wait for a 100 Blue Fulmar day, although my 68 was close to his previous best. Other birds seen included Blackcap, 4 Fieldfares, 25 Redwing (including a dark bird in Norwick that looked good for Icelandic), a Redstart, 36 Brambling, single Lapland and Snow Buntings but no Twite or Mealy Redpolls. 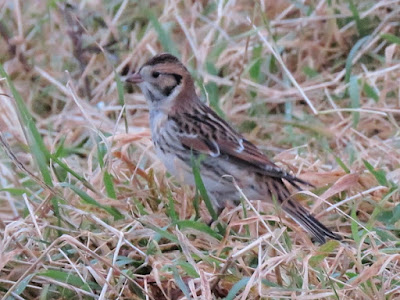 Wednesday 23 October. We visited Skaw, Lamba and Vaylie seeing a Chiffchaff, Fieldfare, 15 Redwing, 16 Brambling and a Snow Bunting but no sign of yesterday's 'little' bunting. It was soon time to head south to Belmont and I said goodbye to Brenda. We had time to check Easter and Belmont Lochs seeing 5 Goldeneye on the former and just one Long-tailed Duck on the latter. Dave then dropped me at the ferry. I'd thoroughly enjoyed my time on Unst (Fetlar less so) and had been very well looked after by Brenda and Dave. Birding with Dave again after more than three years had been really excellent but the change in the weather and my being unable to shake off a persistent cough as well as missing Megan made me feel that I was leaving at about the right time, not that I was looking forward to the two day journey home.

Posted by richard fairbank at 16:06