Monday 10 February. I spent the morning in the Cuckmere hoping the very high tide and strong winds would bring a good number of gulls into the roost. I left Cookie at home as I expeced it to be muddy, and it was. There were at least 1500 large gulls present, 1200 opposite Harry's Bush and 300 north of the A259. The majority were Great Black-backs, about 1200, with most of the rest Herrings. I saw 10-15 Lesser Black-backs and a first-winter Caspian although it wasn't the cleanest I've seen and perhaps wasn't pure? There were another 500 or so smaller gulls casually split fairly evenly between Common and Black-headed with one adult Mediterranean. At any one time many of the gulls were sitting down, unsurprisingly in the strong wind but it made seeing rings difficult. Despite this at least 12 had colour rings although most were too distant to read. I left disappointed thinking I'd only nailed two or three but reviewing images I managed six. In the damp fields north of the A259 I counted 40 Pied Wagtails, 21 Rock and 12 Meadow Pipits but couldn't find any Waters. The two red-head Goosanders were on the scrape, probably all the time as I saw them from above the cottages as I was arriving at 09:00 and leaving just before 13:00. Two Barnacle Geese were with the Canadas but otherwise only Wigeon, Shoveler, Curlew and Green Woodpecker were noted, although it was a gull visit.

Sunday 09 February. Strong winds and the promise of rain put me off going out with my new camera so Megan and I settled on taking Cookie around the Adur Saltings. The high tide still wasn't big enough to reveal anything with 7 Oystercatchers seen from the footbridge best.

Saturday 08 February. Megan and I took Cookie to Mill Hill and in complte contrast to our previous visit we heard Sky Lark, Blue Tit, Robin, Song Thrush, Blackbird and Dunnock singing while Buzzard, Sparrowhawk and 2 Ravens flew over. Later I took Cookie to the Adur seeing Curlew, Little Grebe, Sparrowhawk, adult Mediterranean Gull and two Polish colour-ringed Black-headed Gulls although only one was readable. 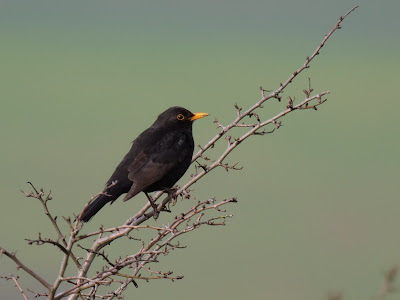 Friday 07 February. I took Cookie to Shoreham Fort at high tide seeing 4 Purple Sandpipers and 2 Turnstones on the wooden jetty, 2 Brent Geese at Harbour Way and absolutely nothing offshore. We called in at the Adur Saltings but it wasn't a big high tide and all but 12 Teal, 12 Redshank and the Greenshank were keeping out of sight in the channels. Later a low tide visit to the Adur produced 3 Grey Plover but nothing of note amongst a thousand of so gulls.

Thursday 06 February. Megan was going to Petworth House to see an exhibition so Cookie and I went to the park hoping a Goosander might be on the Lower Pond. None were although we had to walk round (twice) to be sure as a thick blanket of fog hanging over it made it hard to see one end from the other. We saw 4 Egyptian Geese, 9 Pochard and 37 Tufted Duck on the Upper Pond and Treecreeper and Great Spotted Woodpecker in the otherwise very quiet parkland.

Wednesday 05 February. I took Cookie to the Adur at high tide where we saw 5 Grey Plover (my highest count there for several years), 9 Redshank and a Mediterranean and 300 Common Gulls. We then went up to Beeding Quarry to catch the late afternoon sun in the hope a Little Owl might be doing the same. None were, making it my third failure in over a year. With Little Owls seemingly in decline I fear they may not be there any more. A Buzzard was hardly any compensation. The Adur Mediterranean Gull was the adult seen there on 01 February with a metal ring above its knee. One of the Common Gulls was Norwegian J1Z5, with a miraculously clean ring.

Posted by richard fairbank at 19:38