Saturday 09 May. I cycled down to Shoreham Beach, walked to Widewater and cycled home via Shoreham Fort and the Adur. It was very quiet with little passage and nothing on the beach. Flying East from the beach were 8 Brent Geese, 5 Shelduck, 33 Scoter, , 6 Black-headed and 2 Common Gulls, 22 Sandwich Terns and 4 Swallows. Just a Little Egret was seen at Widewater, two adults and a first-summer Mediterranean Gull flew over me at the Fort and 2 Whimbrel were beside the Adur. No Swifts were seen over our road and the Great Black-backed Gulls hadn't reappeared either.

Friday 08 May. I cycled down to Shoreham Beach, walked to Widewater and cycled home, the Adur being too high to make it worth cycling beside it. Flying East were 12 Brent Geese, 5 Shelduck, 33 Scoter, 26 Whimbrel, a Common Sandpiper, 6 Black-headed , a first-summer Mediterranean and 4 Common Gulls, 38 Sandwich and a Little Tern, a Great and 3 Pomarine Skuas, 3 Fulmars, 64 Gannets (some of which may have been in a flock of 60+ diving behind a trawler), 2 unidentified divers, 4 presumed Little Egrets and 4 Swallows. The skuas were very distant, disappointingly so, the Pomarines in a flock which were seen about 40 minutes later at Seaford. Nothing was noted at Widewater.

Thursday 07 May. I cycled down to Shoreham Beach, walked to Widewater and cycled home via Shoreham Fort. Flying East were 18 Shelduck, 36 distant Scoter, 9 Turnstone, 7 Kittiwakes, 12 Black-headed and 3 Common Gulls, 28 Sandwich Terns, a distant dark morph Arctic and sometime later a closer pale-morph Pomarine Skua, 77 Gannets (some of which may have been in a flock of 60+ diving behind a trawler), 3 Swallows and 2 unidentified hirundines thought most likely to be Sand Martins (which I've yet to see this year)! Two Wheatears were on the beach and 13 Turnstones, 2 Swallows and 2 Greenfinches at the Fort. Perhaps the most unusual sighting though was seeing all 116 Rampion Turbines going round - a first. While clapping in support of the NHS (and to embarrass local Tory voters) 3 Swifts flew over our house, the first I've seen over our road this year. On this day in 1981 I saw 82 Pomarine Skuas off Hove seafront, 51 between 07:15-11:45 and 31 with Andy Clements from 16:30-19:30. They seemed to have dried up when I left late morning to go into the University but talking to Andy convinced us to return. I'm very glad we did. The 51 included a flock of 44 that appeared behind a trawler and landed on the sea, with small groups continuing during the next hour or so. At the time was the largest flock seen in Sussex. The county record day total was broken that day by John Cooper who was at Birling Gap all day and saw 102 and although he probably saw all my 44 they weren't in one flock.

Wednesday 06 May. I cycled down to Shoreham Beach, walked towards Widewater and returned via New Salts Farm and the Adur. Flying East were 15 Brent Geese, 4 Common Scoter, 2 Great Crested Grebes, 13 Whimbrel, a Bar-tailed Godwit, 4 Dunlin, 18 Sandwich Terns, a very distant unidentifed dark skua (possible Pomarine), 2 Fulmars and 39 Gannets while 2 Swallows came in and 3 Wheatears were on the beach. At New Salts Farm Cetti's and Reed Warbler were heard and a Whitethroat seen while an Oystercatcher and 3 Whimbrel were on the Adur at high tide. On the way home I checked the far side of the roof behind us, but there was no further sign of the Great Black-backed Gulls. 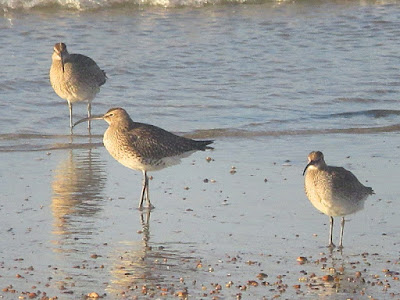 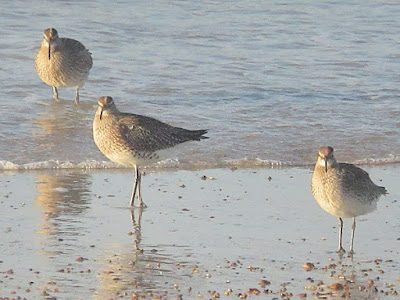 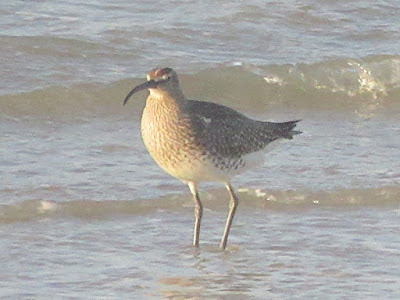 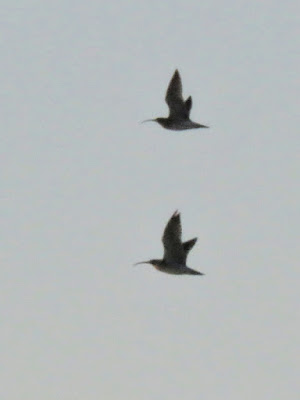 Tuesday 05 May.I cycled down to Shoreham Beach, walked to Widewater and cycled home. Flying East were 5 Shelduck, 4 Common Scoter, Oystercatcher, 9 Whimbrel, 17 Bar-tailed Godwits, a Turnstone, 3 Sanderling, 2 Kittiwakes, 112 Sandwich, 3 Common and a distant Black Tern, 3 Fulmars and 61 Gannets while a Great Skua flew West and a Swift and 9 Swallows came in. At home a pair of Great Black-backed Gulls were on the roof behind for much of the day. Three roofs up from where they unsuccessfully bred last year. On this day in 2014 I finally beat my best Sussex Pom day (the 82 off Hove mentioned above. I saw 128 off Splash Point, Seaford from 05:30-20:00. Ewan Urquhart was there a bit before e and saw a couple that I missed ending the day on 131.