Tuesday 15 September. Frank and I went over to Beachy. It was great to see John & Doreen and Roger & Liz but bird-wise it was very poor. Between 06:40-15:00 we visited most areas around the hotel, walked to the rides, down into Whitbread Hollow and Cow Gap beach, up Frances Bottom the steep way and back to the car via the Z-bends. I saw 5 Sparrowhawks, male Marsh Harrier, 2 Buzzards, 3 Green Woodpeckers, Raven, Sand Martin, 250+ Swallows, 1000+ House Martins, 8 Chiffchaffs, 11 Blackcaps, 2 Whitethroats, Redstart, 7 Stonechats, 2 Wheatears, 6 Yellow Wagtails and 50 Meadow and 2 Rock Pipits. We frequently heard over-flying Siskins but failed to see any. It soon became hot which sapped our enthusiasm and nothing seen was photographable, rarely the sign of a good day.

Monday 14 September. Megan and I took Cookie to Mill Hill where we saw 11 Stock Doves flying east, 4 Chiffchaffs, 22 Blackcaps, 3 Whitethroats and 11 Robins, with more heard. At low tide I took Cookie to the Adur where I saw 15 Ringed Plover, single Common Sandpiper and Redshank, Mediterranean Gull and a familiar colour-ringed Herring Gull.

Sunday 13 September. David Buckingham took me to Rye. We stopped at Pett where the pools were full of water and the only interesting bird we could find amongst the gulls around them was a Cattle Egret. At Rye we walked around the reserve and back by Castle Water, a track closure near the new centre forcing us to cut the corner by the river mouth. It was a nice walk but rather disappointing for birds with nothing to tempt the camera. Highlights were 4 Black-tailed Godwits, 7 Knot, 5 Ruff, Common Sandpiper, 6 Sandwich Terns, 2 Sparrowhawks, Kingfisher, Green Woodpecker, Hobby, 2 Ravens, a Willow Warbler, 15+ Chiffchaffs, a Wheatear, 15 Yellow Wagtails and 75 Meadow Pipits. Back home I saw another Sparrowhawk while walking Cookie around the local park.
Saturday 12 September. Megan and I took Cookie to Mill Hill where a Sparrowhawk was being chased persistently by crows. Also seen were a Chiffchaff, 2 Blackcaps and a Whitethroat with Siskin heard. We had flu jab appointments at our GPs then with news that the Pallid Harrier was again at Thorney I drove down for it. Traffic was bad and it took me 85 minutes. I arrived at the end of Thornham Lane to discover it had flown east across Nutbourne Channel about half an hour earlier. One or two Cattle Egrets were heading to be my only consolation until about an hour and a half later the Pallid Harrier reappeared from the north and landed in a field before a prolonged series of flights around the Great Deep and beyond. It was a superb looking juvenile and gave decent scope views but was never close enough for my camera. It disappeared to the NE and after another 20 minutes I decided to try the western side of Thorney as the tide was coming in. There were 17 Greenshank in a creek off the Great Deep, some with colour-rings, and after going through the security fence I saw an Osprey flying around beyond Marker Point. A successful visit and traffic was normal going home but nothing was close enough to photograph.

Friday 11 September. I took Cookie up to Beeding Hill and we walked what has become out usual circuit: Monarch's Way towards Thundersbarrow, north to Truleigh Hill and back along the top of Room Bottom. I saw 2 Buzzards, 7 Kestrels, 2 Ravens, 10 Swallows, 20 House Martins, a Willow Warbler, 7 Chiffchaffs, 2 Whitethroats, 3 Stonechats, 6 Wheatears, 55 Meadow Pipits, a Corn Bunting and 5 Yellowhammers and heard Yellow Wagtail. A pleasant walk but my quietest visit of the autumn. 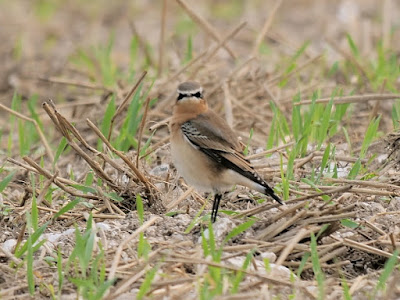 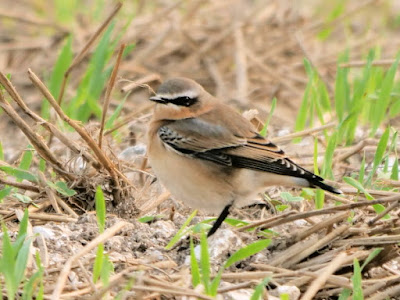 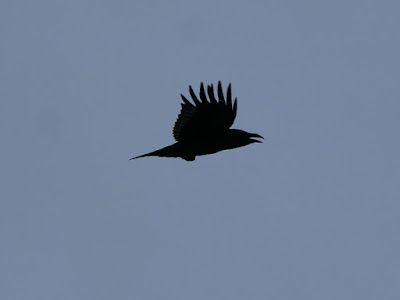 Posted by richard fairbank at 17:56