Monday 03 May. I seawatched with others at Splash Point from 06:00-11:30 in strengthening SE backing SW winds. Flying east, at variable distances, I saw 21 Brent Geese, 178 Common Scoter, 2 Whimbrel, 2 Sanderling, a Little, 3 first-summer Mediterranean and 27 Common Gulls, 41 Sandwich, 17 Little and 270 distant  Commic Terns, 6 Great, a distant pale morph Pomarine and 4 Arctic Skuas (1 pale & 3 dark), 4 Guillemots, 13 Razorbill and 19 unidentified auks, a Red-throated Diver, a Manx Shearwater, 25 Fulmars, 380 Gannets and 2 Shags. Three Swallows came in and 500 Kittiwakes and 2 Rock Pipits were also seen. Many thanks to those present on recent days for excellent company, a few distracting chats with those nearby when things were quiet and many shouts of approaching birds I might otherwise have not seen. It was certainly worth making the effort to go to Seaford to seawatch compared to Widewater where most birds passing are too far out to pick out even when I'm not the only one looking. Having said that I'll give Seaford a break until the weather looks more favourable. Successive early starts have worn me down! 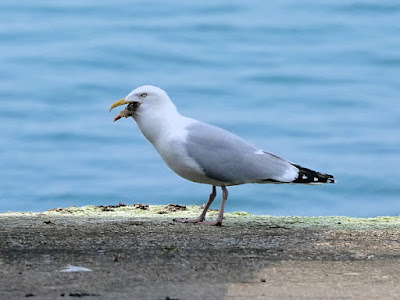 Saturday 01 May. I seawatched with others sharper eyed than myself at Splash Point from 06:10-14:00 in light N backing NE then SW winds. My start was delayed by 10 minutes as the A27 was closed at Falmer due to an accident and I had to cut down to Rottingdean. Flying east, at variable distances, I saw: 229 Brent Geese, a Mute Swan, 3 Shelduck, 180 Common Scoter, 3 Wood Pigeons, 4 Oystercatchers, 27 Whimbrel, 36 Bar-tailed Godwits, a Dunlin, 5 Little and 9 Mediterranean Gulls (6 adults and 3 first-summers), 62 Sandwich, 2300 Commic Terns, 4 Great and 17 Arctic Skuas (5 pale & 12 dark), 2 Guillemots, a Razorbill and 8 unidentified auks, 14 divers including 10 Red-throated and a Black-throated, Balearic Shearwater, 30+ Fulmars and 35+ Gannets. A Shag was on the sea, 2 Swallows came in and 500 Kittiwakes, Peregrine and Rock Pipit were also seen. Most of the Commic Terns were too far out to identify while the closer flocks were went by too quickly to concentrate on more than one or two individual birds. My impression was that Commons outnumbered Arctics by some margin.
Posted by richard fairbank at 19:29