Tuesday 22 June.  All day was spent birding on the main trail at Buhoma, with two armed guards in tow, and later by myself along the river trail near the HQ.  My target here was Short-tailed Warbler which we heard briefly by the main trail but could not see.  Equally annoying was that our guards saw a male gorilla cross the trail ahead of us while we were looking at something ordinary in the canopy.  Birds seen included Great Blue Turaco 2, Black-billed Turaco 4, African Pigmy Kingfisher 1, Black Bee-eater 2, Blue-throated Roller 2, Yellow-spotted Barbet 2, Elliot’s Woodpecker 1, African Broadbill 1, Red-throated Alethe 1, Green Hylia 1, Short-tailed Warbler h, Vanga Flycatcher 2, White-tailed blue Flycatcher 2, Blue-headed Sunbird 1 male, Stuhlmann’s Starling 1, Red-headed Malimbe 1 and Grey-headed Negrofinch 1. 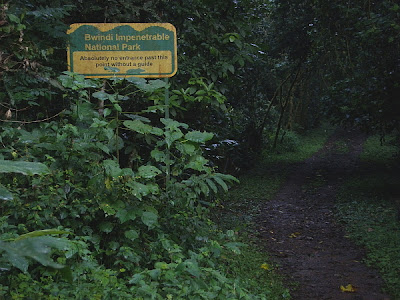 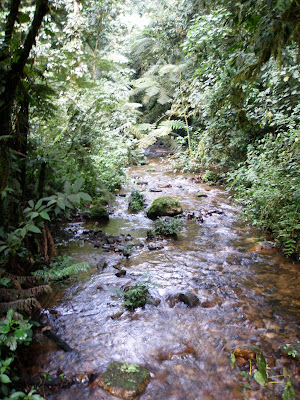 Wednesday 23 June.  All day was spent birding along the main and waterfall trails at Buhoma and the river trail near the HQ.  We heard another Short-tailed Warbler near the main trail and this one was more responsive, eventually giving brief but excellent views.  Birds seen included Black-billed Turaco 1, Bar-tailed Trogon 1, Black Bee-eater 3, Yellow-spotted Barbet 1, White-bellied Robin-Chat 1, Short-tailed Warbler 1, Vanga Flycatcher 2, White-tailed blue Flycatcher 2 and Grey-headed Negrofinch 1. 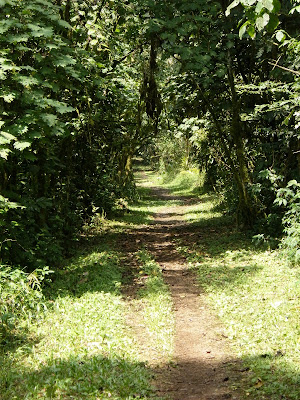 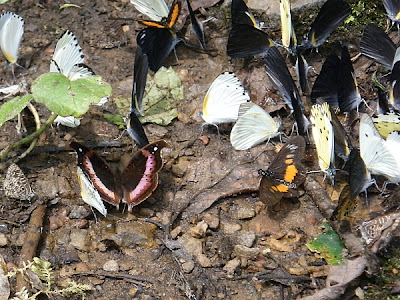 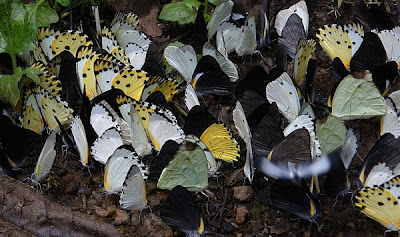 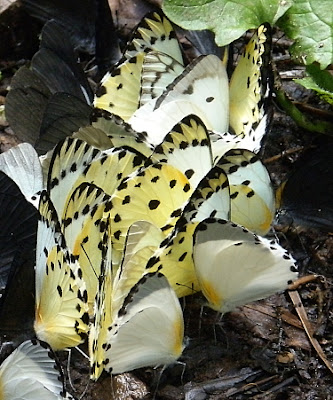 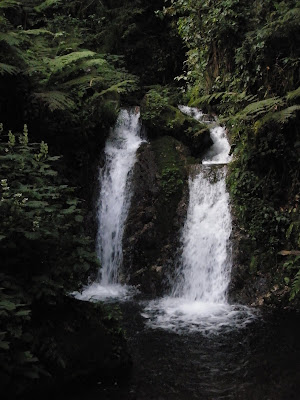 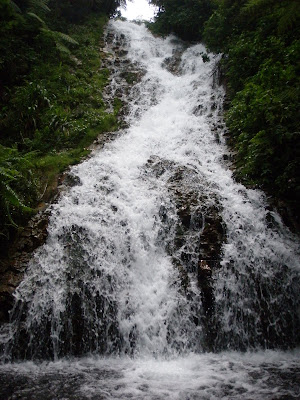 Thursday 24 June.  After much negotiation Harriet arranged a charter to take us to Ruhija, the higher elevation section of Bwindi NP.  It took 2-3 hours to get there but unfortunately the charter had other commitments which didn’t allow us time to stop to bird the Neck on the way.  I put my tent up in the grounds of a new lodge on ridge at end of village.  Harriet was on good terms with everyone there (as usual) and managed to get a complementary room as the lodge wasn’t full.  We birded the 'school' trail in the afternoon.  Birds seen included Black Cuckoo 1, Elliot’s Woodpecker 1, African Broadbill 1, Red-faced Woodland Warbler 1, Mountain Masked Apalis 4, Rwenzori Batis 2, White-tailed blue Flycatcher 1, Stripe-breasted Tit 4, Regal Sunbird 2, Sharpe’s Starling 2 and Strange Weaver 2. 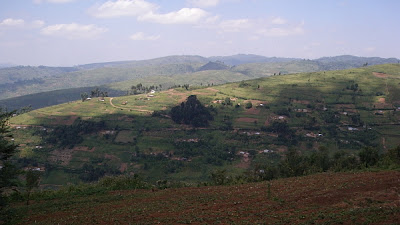 Friday 25 June.  Most of the day was spent visiting Mubwindi swamp, two hours steep walk down a ridge below the Ranger Station.  We had a local guide Amos and an armed guard.  Amos knew of a recently active broadbill nest which made me rather tense.  After reaching the valley floor we went a short way up a narrow trail and the nest was casually pointed out to me.  It took me a while to realise it was still occupied although only the top of the birds head could be seen initially.  A male visited after about 30 minutes although my attempts at digiscoping really suffered through not having a tripod.  On the walk back up the ridge we were very fortunate to get brief views of three gorillas, including a silverback.  They were from one of the habituated groups that the area is famous for, although they were usually well away from the trail.  What a brilliant end to the day.  Birds seen included Crowned Eagle 1 (an amazing view of one stooping into a gap in the canopy ahead of us), African Green Broadbill 3 (at nest), Archer’s Robin-Chat h, Mountain Yellow Warbler 2, Red-faced Woodland Warbler 3, Collared Apalis 2, Mountain Masked Apalis 5, Yellow-eyed Slaty Flycatccher 2, Rwenzori Batis 1, Stripe-breasted Tit 4, Regal Sunbird 1, Doherty’s Bush-Shrike 2 and Montane Oriole 2. 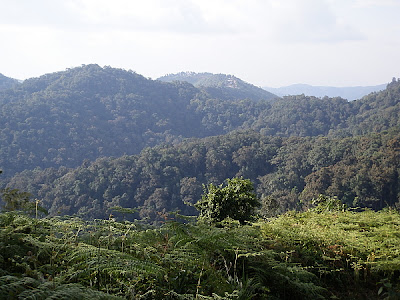 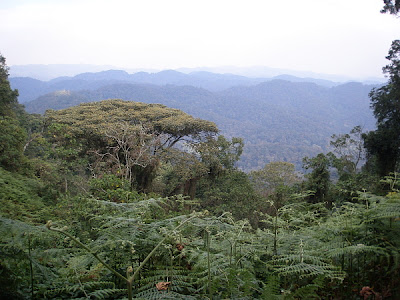 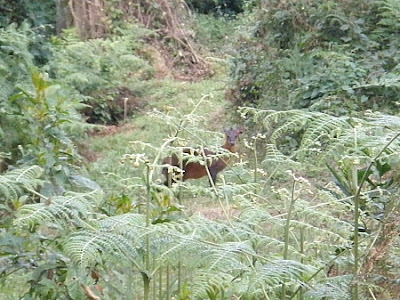 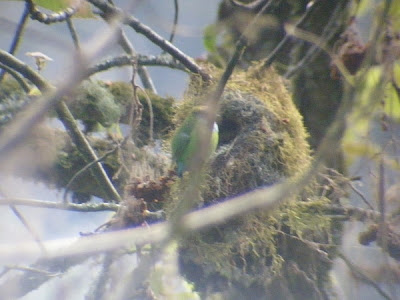 Saturday 26 June.  Something of an anticlimax after the previous day we walked the main road through the park in the morning, although it soon became hot and birdless, and tried the School trail again later.  At this point not having a vehicle reduced our options and although I had been successful with all of my target species there is always something else it would be nice to see.  Birds seen included Crowned Eagle 1, Grey Crowned Crane 3, Barred Long-tailed Cuckoo 1, Olive Thrush 1, Red-faced Woodland Warbler 1, Grauer’s Warbler h, Mountain Masked Apalis 2, Rwenzori Batis 1, Stripe-breasted Tit 2, Regal Sunbird 3 and Dusky Crimsonwing 1. 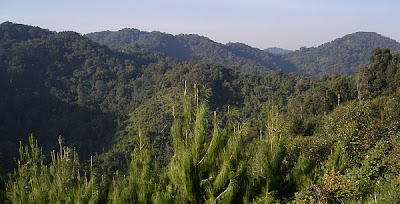 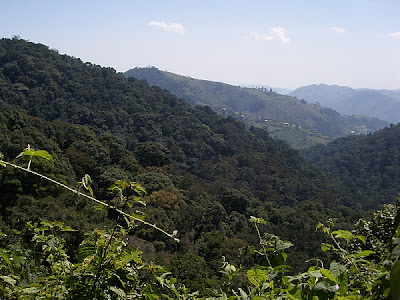 Sunday 27 June.  A return to Mubwindi swamp seemed the best option for what would be our last day at Ruhija although in the event Harriet was struck down with a fever and stayed at the lodge.  Amos took me back down to the swamp where birds were much as on the previous visit although it was nice to see the broadbills again.  However despite finding a tree stump to use as a tripod there was much less activity and the one time the male came in my scope slipped in my excitement and I failed to get back on it and take any shots before it departed.  Harriet was feeling much better when I got back and we decided it was best to leave for Kampala the following morning, giving us a spare day should there be any delays.  With few vehicles at Ruhija a charter even to a nearby town was going to be difficult to arrange but we were very fortunate that a Spanish couple who staying in the lodge were returning to Kampala and agreed to take us in their 4WD.  Birds seen included Handsome Francolin 2, Great Blue Turaco 2, Black-billed Turaco 1, Narina Trogon 1, African Green Broadbill 2 (at nest), Red-throated Alethe 3, Red-faced Woodland Warbler 1, White-browed Crombec 1, Mountain Masked Apalis 3, Rwenzori Batis 2, Stripe-breasted Tit 2, Regal Sunbird 1, Montane Oriole 4 and Strange Weaver 1. 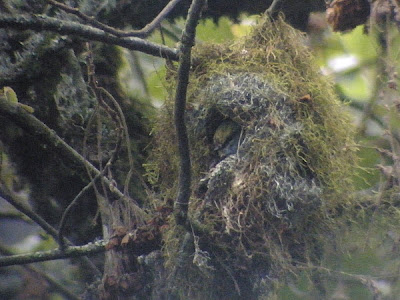 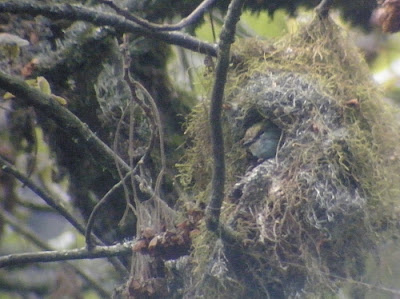 Monday 28 June.  All day travelling to Kampala was disrupted towards the end by the 4WD breaking down.  Fortunately it was soon fixed and we were dropped at Kampala Backpackers just as it was getting dark.  It was nice not to have to put up a tent!  Birds seen included 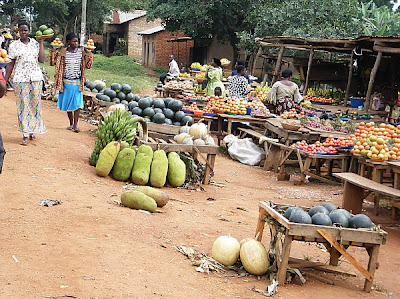 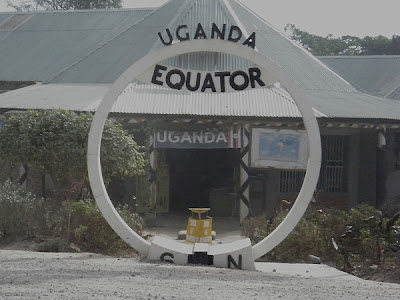 Tuesday 29 June.  Harriet arranged a car and driver for us for the day and we revisited Mabamba as I’d enjoyed it so much the first time.  Shoebill didn’t perform quite so well but were still amazing.  We then spent a couple of hours in decent woodland at Mpanga before I was dropped at the Green Valley Motel in Entebbe at 4pm.  It was very sad to say goodbye to Harriet who had looked after me so well – a more cheerful, dedicated and knowledgeable guide it would be hard to imagine.  I looked around the gardens in town and walked to the shore of Lake Victoria while it remained light and had a restless night concerned that with no alarm I’d miss my 2 a.m. taxi to take me to the airport in time for my return flight home.  Birds seen included Shoebill 2, Banded Snake Eagle 1, African Hobby 1 (over Entebbe), Red-headed Lovebird 2, Great Blue Turaco 6, Narina Trogon 1, Blue-breasted Bee-eater 2, Double-toothed Barbet 1, Vanga Flycatcher 1, Red-bellied Paradise Flycatcher 1, Red-chested Sunbird 12, Papyrus Gonolek 2, Velvet-mantled Drongo 1 and Weyn’s Weaver 2. 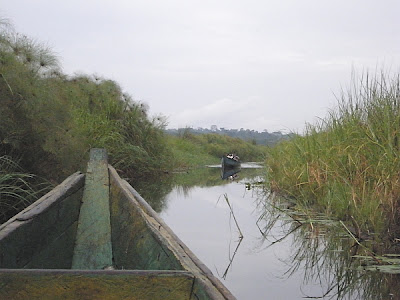 Posted by richard fairbank at 13:20