Monday 14th June 1982:  Simla to Manali (bus), Himachel Pradesh,
Left Simla at 05:30 to start a pretty desperate 12 hour bus journey to Manali.  We had to change buses at Kulu which made our seat reservations invalid.  Saw a few birds from the bus including three Sarus Cranes but it was an experience best forgotten.  On arrival at Manali we were being hassled by the hotel touts when Jon Eams and Craig Robson appeared in the mele.  “Do you want to stay in our hotel?” I heard Craig’s familiar voice ask.  We certainly did, following them first to the Mona Lisa Restaurant (quite good) then the adjoining lodge (20 rupees for room for three).  Richard Grimmett, Rod Martins and James Wolstencroft were with them.

Tuesday 15th June 1982:  Manali to Khoti (jeep), Himachel Pradesh,
We waited around until 10:00 when, after much hassle, Richard Grimmet and Jon Eames got permission for us all to stay in a forest rest house at Khoti.  We quickly bought some supplies and all piled into a jeep (60 rupees).  We arrived at Khoti where a guy unlocked the cottage for us.  Great fun!  I spent the rest of the day with Nick on rather dubious paths up in the forest seeing a few birds including Striong-footed Bush Warbler (at last), a pair of White-cheeked Nuthatches and 5 Indian Blue Robins.  While eating in the village after dark Craig walked in with a big smile on his face and told us he’d seen a Brown Bear.  Quite a grip.


Wednesday 16th June 1982:  Khoti, Himachel Pradesh,
We were up at 05:00 and out before 05:30.  Nick and I legged it up the hillside along a reasonable path to the upper clearing.  Before reaching it I disappeared off for a toilet stop and heard frightening rustling, grunting and roaring hearding my way.  A medium sized dark blackish shape ran up the hillside partly obsacured by vegetation about 20m away from me – a Black Bear!  Somewhat shaken I quickly returned to Nick who was so gripped he charged in straight after it but to no avail.  We got to the clearing and were sitting overlooking a snow covered river when a large, pale Brown Bear came down the far bank deceptively fast, and disappeared below us after being in full view for a couple of minutes.  I’d never seen a bear before so it was amazing to see two in the space of 15 minutes.  We continued climbing but the path got really bad and at one point I slipped 10m down a snow covered slope, clawing to arrest my progress with limited success.  We spent rest of day crashing around bushes high above Khoti and sitting in a sunny clearing before returning to rest house at 18:30.  As well as the bears we saw some nice birds including 4 Black and Yellow Grosbeaks whixh were new and 3 White-bellied Redstarts.  I’ve a head cold developing today and my stomach is still not normal. 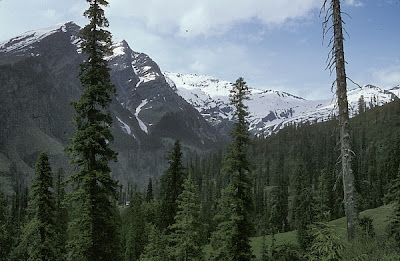 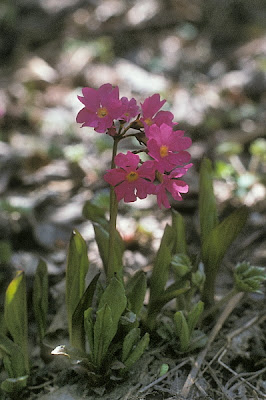 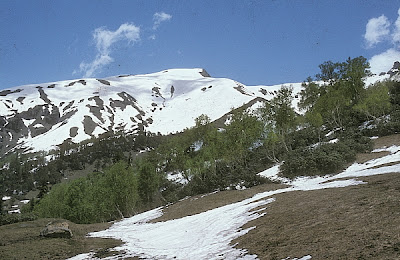 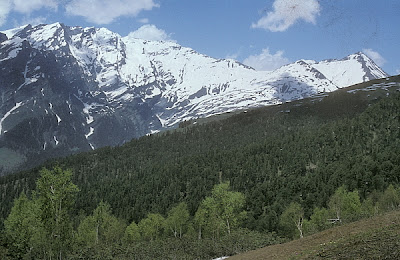 Thursday 17th June 1982:  Khoti to Manali, Himachel Pradesh,
My cold came out during the night when very sweaty and blocked up.  I must have been feeling poorly as I stayed in my sleeping bag reading while the others went out for the morning although the weather was not too good outside.  I felt a lot better by the time they returned and we then walked to the cafe in the village at midday where we got a bus into Manali (2 rupees).  The Tourist Office there wouldn’t sell me any postcards!

Posted by richard fairbank at 12:59