This journey was made before the Manali-Leh road was opened in 1989.  The 'new' road would have been a much more interesting journey and probably only taken half the time.  We would have missed the Zoji La but would have crossed it leaving Ladakh and once would have been quite enough.  Ditto our nights in Kargil!

Saturday 19th June 1982:  to Srinagar
We were up at 05:30 and along to the Bus Station by 06:00.  Total disorder with no seats bookable until 07:00 when any surplus seats could be filled.  Dave queued inefficiently until 07:30 when he was almost the last person to acquire tickets (28 rupees each), on an extra bus.  We rushed to the bus as it was supposed to be just leaving but it didn’t depart until 08:15 and then only to the bus depot on the edge of town where a tyre was repaired.  We finally left at 09:30 so could easily have had a lie in.  It was a good journey and we had decent seats with plenty of leg room.  The bus only stopped a few times to pick people up and no one ended up standing in the aisles.  The journey was fine until the outskirts of when the bus stopped frequently to let people off.  We got off at the Tourist Office which was still open at 22:00.  We were told it was too late to book on a bus to Leh the next morning so we got a cheap (D-class) houseboat nearby (5-6 minutes walk) for 10 rupees each.  Houseboat Light was an excellent place on quite a wide back river by the golf course.  It even had a decent shower.

Sunday 20th June 1982:  Srinagar
We were up at 06:30 and along to the Bus Station full of expectation but were told we couldn’t get on a bus to Leh today.  We were told to return at 09:00 to book tickets for tomorrow.  We returned and after much queuing and being given the runaround eventually got tickets (58 rupees each) after I lost my temper for the first time in ages.  The rest of day was spent lazing around, mainly in a horizontal position on the houseboat. 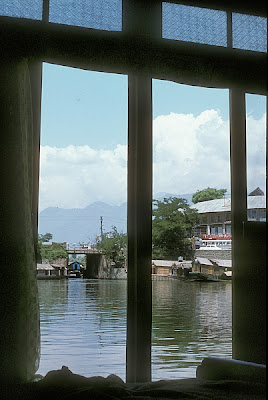 Monday 21st June 1982:  Srinagar to Kargil
We got to Srinagar Bus Station at 08:25 after late breakfast.  Our bus was due to leave at 09:00 and departed at 09:30 only to go as far as their depot where the bus was filled with petrol and had its tyres pumped up!  It returned to the bus station and finally departed at 10:15.  Going through the Vale of Kashmir was very alpine then it was a steep climb with hairpin bends up to Zoji La and over into Ladakh.  It was a very treacherous road with a poor surface, only recently opened after the winter snows.  Ladakh was very reminiscent of Atlas Mountains in Morocco with mud plastered on the sides of houses.  It was a very barren and rugged scenery with only any green where it had been irrigated, usually beside rivers.  The road is a major engineering achievement, with hairpin bends down almost sheer mountains.  Not for the faint hearted (like me)!  It was slow progress, especially after dark due to the bus ahead breaking down.  We arrived in Kargil, our overnight stop, at 22:05.  A convoy system was in operation over the Zoji La with up traffic only allowed in afternoon.  This was probably the reason for us leaving Srinagar late; but knowing that would be the case why schedule a 09:00 departure?  We passed large number (100's) of army trucks on way down.


Tuesday 22nd June 1982:  Kargil to Leh, Ladakh
Our bus was allegedly departing at 05:30 so we were up and ready then but,surprise surprise, it was late and didn’t leave until 06:45.  It was a long day but an interesting one with spectacular scenery, interesting villages and a couple of monasteries.  There were long delays due to the army again, at one stage a crashed army truck blocked the road for an hour or so.  We arrived in Leh (11,500 ft) at 20:00, just after dark.  We were encouraged in a very low key way by a very elegant lady in full Ladakhi dress to stay at her Ti-Sei Lodge.  It was a very pleasant change from the usual hasslers, of which there were a few at Leh.  The Ti-Sei proved to be excellent and probably the best lodges of the whole trip. 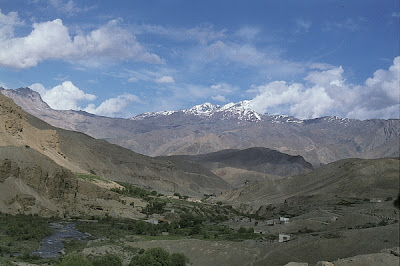 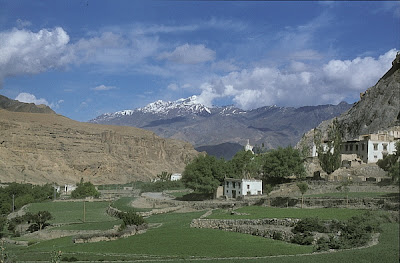 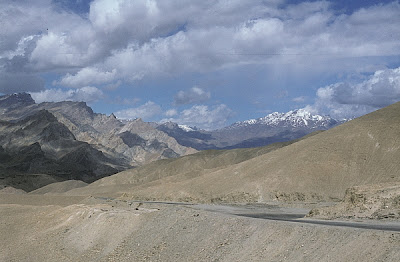 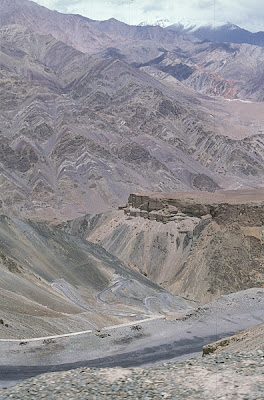 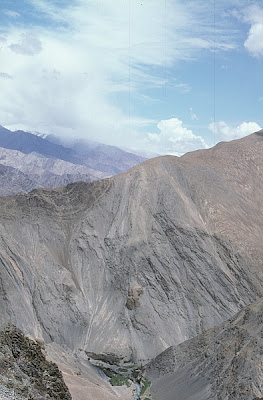 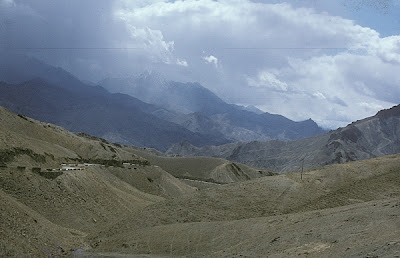 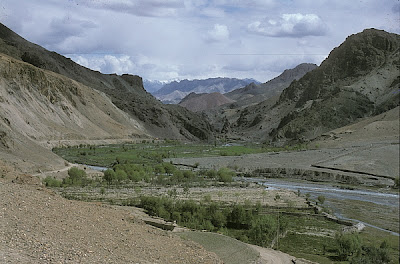 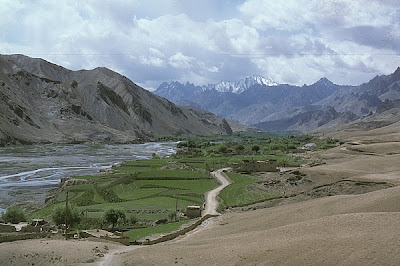 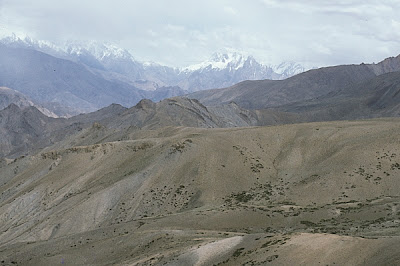 Posted by richard fairbank at 13:51