not an Estonian CR Gull

An unfamiliarly colour-ringed gull (white 9P7 on black) was digiscoped on the River Adur opposite Shoreham Airport at low tide on Sunday morning (09.30ish).  I identified it as an intermedius Lesser Black -backed Gull given its dark but not jet black mantle and bright yellow legs.  Nothing that follows has really changed my mind although the potential of it having been ringed in Estonia is intriguing.

A check on the www.cr-birding.org web-site only lists similarly coloured/coded rings as being used for large gulls by a Lithuanian Ringing Scheme although these listings are not always exhaustive.  I emailed the Head of the Lithuanian Bird Ringing Centre yesterday, was told it was ringed in Estonia and given contact details.  I'm waiting to hear back from Estonia. [Monday 2 July update: it isn't from Estonia, not a great surprise given the similarly coded bird seen on 30th.  Enquiries are continuing ...


Tuesday 3 July update: it is from Guernsey]

If the bird was ringed in Estonia, and it may not be from an Estonia scheme, it would be in the range of fuscus (Baltic Gull, no accepted Sussex records) rather than intermedius although its mantle appears too pale for that taxon.  Heuglin's Gull (no accepted British records) might come into the equation although this bird's mantle appears a shade or two too dark (but see http://www.birdguides.com/iris/pictures.asp?v=1&f=182437 which doesn't look that different to the penultimate photo below)?  Even with a more comprehensive set of images the best identification feature is clearly the ring.  No wonder the first thing I look at on larger gulls are their legs!

The bird was looked for again without success last evening although it might still be around as low tide was at 10pm and with the first sandbar only starting to be exposed after 9pm there were not that many gulls in the pre-roost gathering .  Late morning would now be a good time to look.


A full set of all seven digiscoped images I took follow, not all are sharp unfortunately.  Images 2, 3 and 7 are probably the least true to the bird as they were probably auto-tone corrected to try and make the ring code more visible, the overall effect being to lighten them slightly. 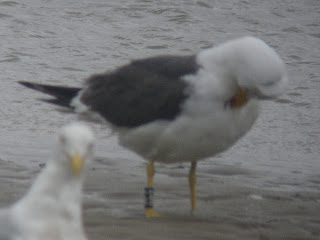 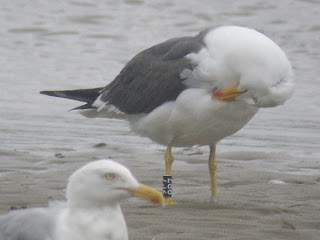 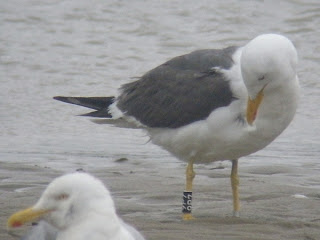 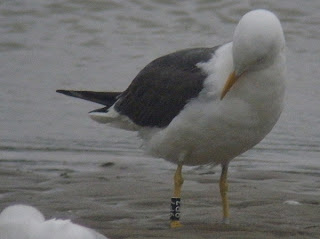 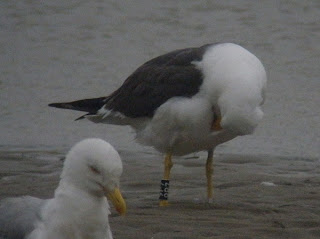 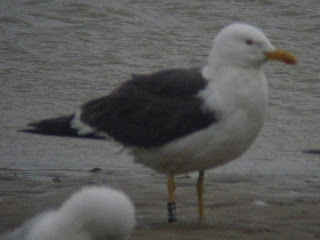 Posted by richard fairbank at 13:56