This continues the blog of an Easter 1986 trip to Australia, based on scant notebook entries and vague memories and illustrated with digitised images slides taken at the time, some of which have since degraded.


The 2 April was another wet day and we had a quick look around the Crater, seeing many of the species seen the previous day, before driving to Mission Beach for the afternoon.  Our target bird here, in fact the main bird for the trip, was Southern Cassowary.  Lacy’s Creek was a traditional site but we had heard that the worst cyclone in living memory had, over a large area, flattened a lot of trees earlier in the year, closing trails and making it very hard for cassowaries to find fruit.  There had been stories in the press of hungry cassowaries appearing in gardens with one or two people being injured by their kicks.  On arrival at Mission Beach we asked in the Post Office if anyone knew of any recent cassowary sightings.  Someone told us of a relative who had been kicked by one but that had been some weeks ago and not nearby.  We got no information on recent sightings but it was suggested that food might have been left out at Lacy’s Creek.  We decided to go there and hope for the best.  We arrived and immediately spotted a large cardboard box in the car park.  I wound down the window and was about to start scanning when Paul spotted an adult running towards us.  My amazement and delight changed to consternation as it stuck its head through the open window.  In tow it had four large young and a sub-adult.  Clearly their hunger had overcome their caution.  The box was full of apples but they were too large for the cassowaries to eat as they mainly swallow fruits whole.  I got out of the car and started cutting them up into manageable pieces.  It was a very surreal experience crouching down in the open next to a notoriously secretive bird that was of a similar size to me, but with much more dangerous feet.  The cassowaries eventually wandered off, melting into the surrounding forest despite there being more horizontal than vertical trees.  We tried to go down one of the trails but soon gave up as progress was impossible.  Even the surviving trees had had most of their developing fruits ripped off by the cyclone leaving nothing for the cassowaries.

We camped near Mission Beach and returned to Lacy’s Creek on 3 April.  The extended cassowary family were very much in evidence and we enjoyed much of the morning with them.  We then drove north to the Goldsborough Road with brief roadside stops.  Birds seen included Black Bittern, Azure Kingfisher, Black Butcherbird, Spectacled and Black-faced Monarch and Cicadabird.
We started at the Goldsborough Road on 4 April getting good views of Double-eyed Fig-Parrots and another Azure Kingfisher.  We then returned to Cairns, with a few unproductive roadside stops, and returned the hire car which had served us well.  We spent the afternoon in the rain on Cairns Hill and Esplanade seeing 4 Lovely Wrens, one an immaculate male, on the hill, Rufous Night Herons on the Centennial Lakes and my only Large-billed Warbler at White Rock.  The 5 April was another wet day which we spent birding Cairns on foot covering the Esplanade, Botanical Gardens, Hill trail and Airport pools.  Highlights were White-browed Crake, a new bird, on Centennial Lakes, 20 Great Knot, a poor view of Red-crowned Fruit-Dove and a tail-less White-tailed Paradise Kingfisher on Cairns Hill.

We took a day trip to the Great Barrier Reef on 6 April.  We first headed out to Green Island, seeing 5 Rainbow Bee-eaters flying over about half-way out.  We had an hour on Green Island and a quick walk around produced 30 Pacific Reef Herons and 3 superb Red-crowned Fruit-Doves.  Back on the boat we saw 12 Lesser Frigatebirds over Green Island and 6 Brown Boobies on the way to Michaelmas Cay.  As we approached the Cay we began to see Brown Noddies and Sooty Terns.  Much to our frustration the tourist boat then stopped for a buffet lunch and we were then taken on a half hour glass bottomed boat tour.  I’m sure it would have been very interesting but my attention was squarely with what was flying over, trying to check Brown Noddies for Black and Sooty Terns for Bridled.  We were finally landed on the beach, about an hour later than I would have liked, two hours if one excluded the hour on Green Island, although the Fruit-Doves had been nice.  Michaelmas Cay was amazing with fearless breeding seabirds covering most of it in a roped of area one could walk to the edge of.  We saw 2500 Sooty Terns and 2000 Brown Noddies from which we picked out 2 Black Noddies.  We also saw 2 Masked Boobies, 30 Black-naped, 400 Crested, 10 Lesser Crested and a Roseate Tern while 10 Turnstones on the beach added a feeling of the familiar.  We had the opportunity to go snorkelling but I was happy just watching the terns - it was like being in a David Attenborough programme.  Our time on the Cay was over far too quickly and we returned to Cairns seeing a probably Fluttering Shearwater on the way.  It had been an excellent day. 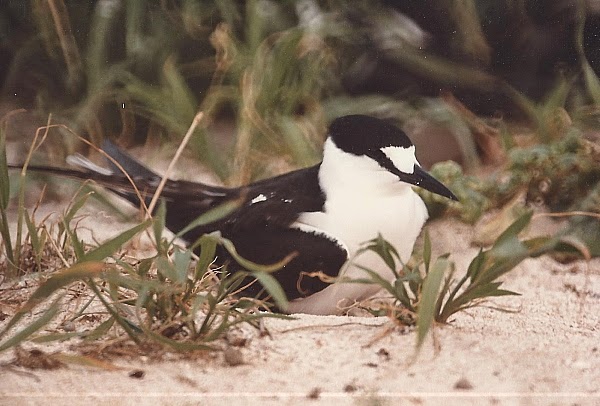 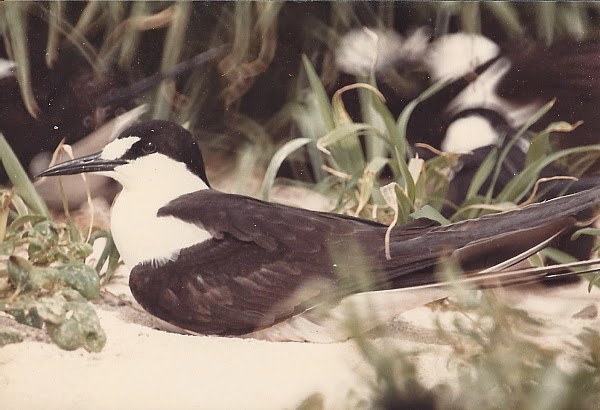 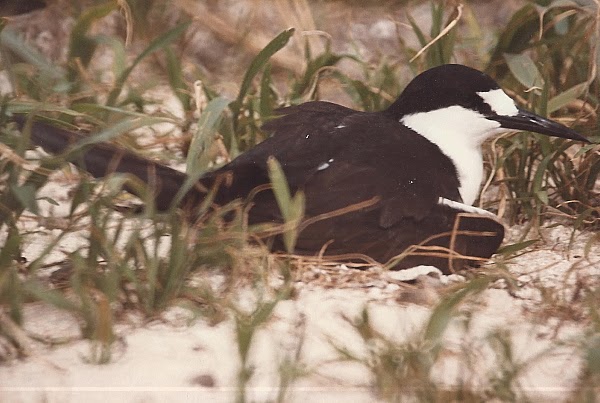 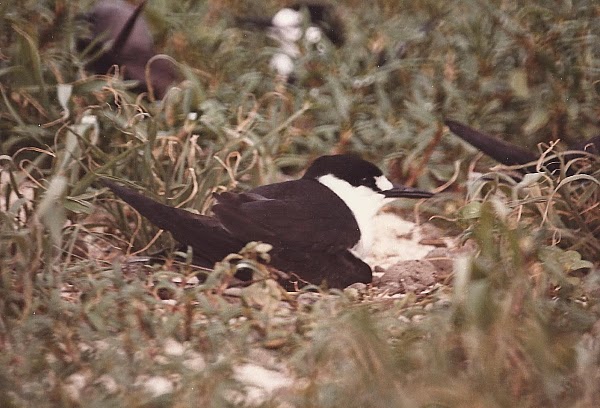 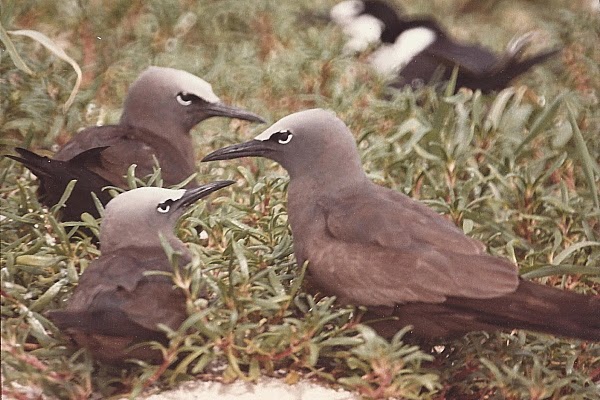 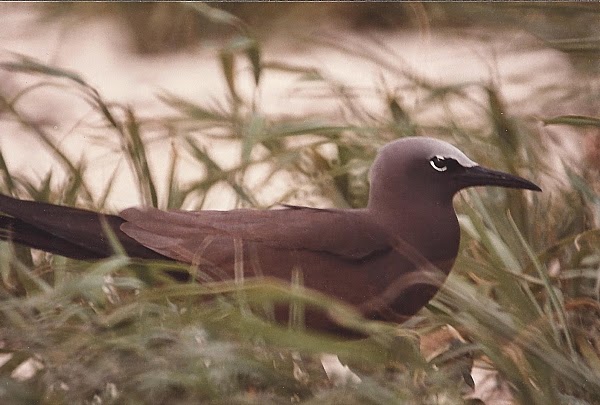 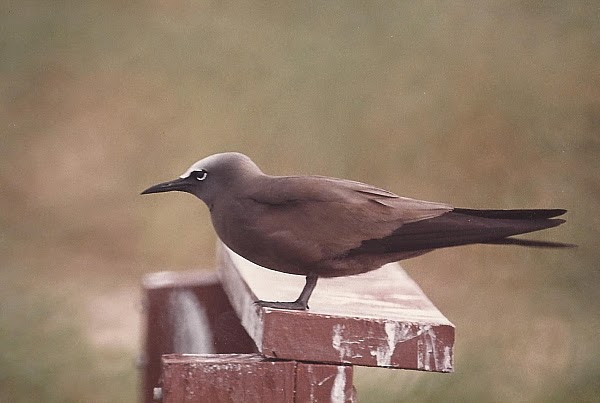 On 7 April I had the morning birding around the usual sites at Cairns (Esplanade, Botanical Gardens, Hill, Airport).  Highlights were an adult and two juvenile White-tailed Paradise Kingfishers and the family of four aptly named Lovely Wrens on Cairns Hill.  I left Paul, he had been a great travelling companion and superb birder, and caught the afternoon flight to Darwin.